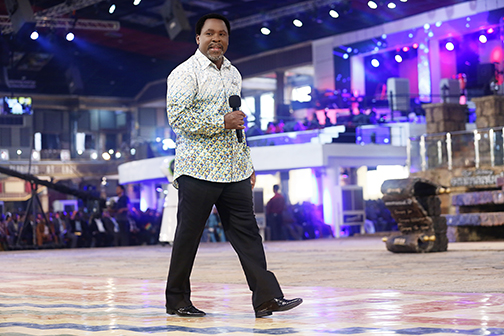 The Power and Glory of God permeated the atmosphere while the choir sang songs of worship and thanksgiving to celebrate God’s goodness. It was another harvest of powerful testimonies, for many of those who had been blessed beyond their expectations came to express their gratitude to Him who made everything possible.

Focusing on Southern Africa, he also warned of a natural disaster that is spreading in different countries in the region: « Now let’s go to Southern Africa. I see natural disasters like the wind – a bad wind coming from the sea. Bad natural condition. A natural disaster that will destroy many things, which will move from one country to another. I saw this two years ago and we continued to pray. But there is momentum in the sea that will seem strange, which has never happened in Africa. All this will come from the Mozambique region. When I saw him for the first time three years ago, the thing was repeated in September of last year. This is part of the prophecies that I had … Stand up and pray for Southern Africa – moving from one country to another. Like Mozambique, South Africa, Botswana. Open up your lips. Why I call your attention to this – I prayed but God said I should call your attention because of the atmosphere in which we find ourselves. All that we delude will be loosed; Everything we bind will be bound.
The man of God also called for prayers for the nation of Ethiopia, asking the faithful to pray against a severe famine that will be caused by the unpredictability of their seasons. He ordered the wind to be calm. Turning to the nation of Nigeria, the man of God reiterated a prophecy spelled out earlier on the country. According to him,
The food shortage and the devaluation of the naira that had already taken place will create difficulties that will last until June 2017. The man of God also prophesied that the naira would go to the rate of 650 for 1 dollar, Would go no higher than that before it finally drops. He also urged to pray for President Buhari, who, according to him, has good intentions but needs the support of his supporters. He asked prayers for the President: « Ask God to give him everything he needs, and if you do not hear anything, ask him to receive everything he needs in strength and skill. There is weakness, a strength where there is weakness! … More importantly, we must also stand up so that the Lord gives us the grace to maintain democracy. Thanks for democratic sustainability. Pray for an uninterrupted democracy.

Evangelist Ruth shared a message entitled THE HEAVEN IS WITH YOU, in which she reminded Christians of their true nature in Jesus Christ: « The heart of a believer is the prayer room – the point of contact for the Holy One -Mind. Your heart can also be the point of contact with satan if he is troubled or full of offense … you want to be happy but something persists in stealing your joy – satan wants you to be sad because it is his Entry into your heart.

She exhorted listeners not to exchange their joy by listening to the voice of their situation, but by listening to the eternal promises of God (John 15:11). She summed up her message by asking Christians to discover the presence of God in them and to ignore the devil because there is no limit to what they can accomplish as children of God – who have Heaven in them. She emphasized with a practical demonstration that the greatest embarrassment you can give to satan is to ignore it because when you cry, Satan laughs and when you laugh, satan cries. « Satan wants you to cry, when you laugh, you have defeated him. »

A DEFORMED VERTEBRAL COLUMN IS RESTORED

In 2012, Wellington Nathaniels of Germany had experienced acute back pain that had a profound inability. Thus, every day that passed was experienced in pain and discomfort and offered no hope of solution. The peaceful sleep had flew away from him, for the pains kept him constantly nailed to the ground. When the situation worsened in 2013, Mr. Nathaniels was advised by his physician to see a specialist who, after a series of X-rays, concluded that he had a deformity of the spinal cord and that the condition was over- Beyond their expertise. Conferring with his doctor after the sad discovery, he was advised to either live with the condition while taking medication or undergo corrective surgery whose success can not be guaranteed.


Caught up in the spiral of this medical dilemma, he sought the opinion of his wife who advised him instead to visit SCOAN and seek the face of God. Mr. Nathaniels listened to his wife’s suggestion and visited SCOAN in 2014. Receiving Morning Water and the stickers-anointed « Hello, » he returned to Germany and applied them in faith. While he was administering Morning Water, he also placed the stickers-anointed « Hello » in strategic positions of his house.

By 2015, he underwent another series of X-rays and it was discovered that something strange had occurred. His deformed spinal cord was restored to its normal state. Even the bent bone was miraculously straightened as shown on the X-ray results, which left his doctor stunned.

Ionara quickly discovered that they were not compatible and were merely reunited by the power of sorcery. She did not renew the alliance because realizing that their union was not authentic. As the flame of their « union » was extinguished, his desire to move to another city intensified. Although she eventually settled in Spain with her husband, their marriage was on the knee shortly thereafter, which forced her to send her daughter to Brazil to live with her mother while she stayed in Spain. She decided to stop practicing witchcraft and all the evil spirits she had worked with began to torment her. She became depressed and was constantly nourished by suicidal thoughts.