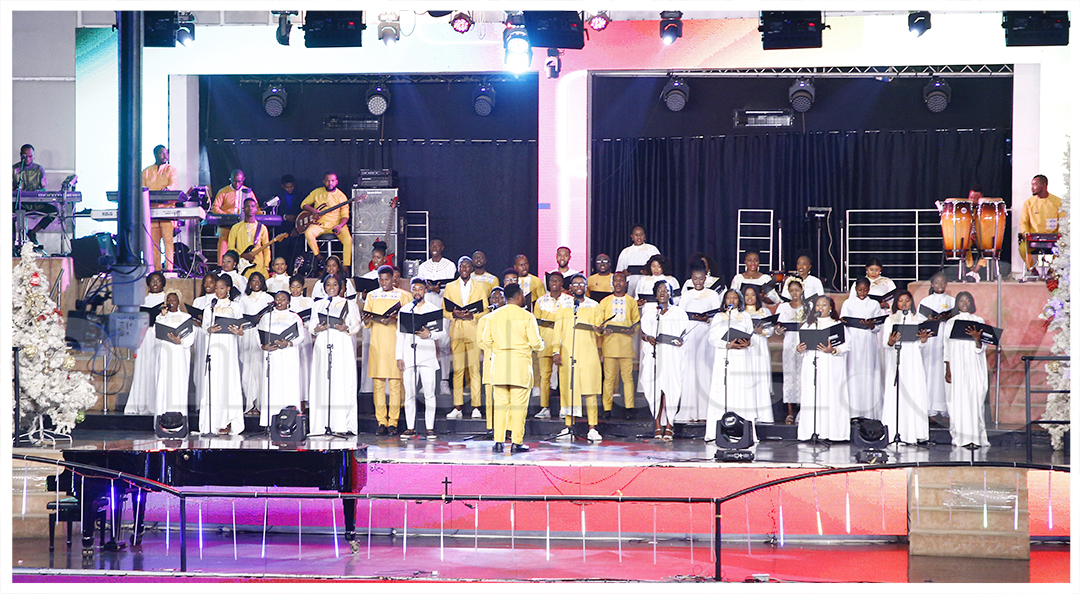 On Christmas Day 2022, The SCOAN Sunday Service was a time of mighty impartation for all those who made their way into The Arena Of Liberty from all over the world. Although the service was short, Pastor Evelyn Joshua did not fail to help the people to make a heart connection with the Holy Spirit.

Once the service started, The SCOAN Choir launched into a series of songs – some on the reason for the season of Christmas and others on the supremacy of God’s power at all times. “Be Still In The Name Of Jesus/Every Storm That Rises Against Me,” said the lyrics of “Calm Every Storm”, one of the compositions of God’s departed General, Prophet TB Joshua.

In her brief address to the church, Pastor Evelyn Joshua stressed the importance of Christmas while noting the supremely sacrificial nature of Christ’s death on the Cross. “Whom we are celebrating today,” she said, “is Christ that God revealed to us.” On the reason for Christ’s crucifixion, she said it was for the restoration of God’s glory to humanity.

As for lessons from the earthly life of Jesus Christ, the woman of God enjoined believers to always wait for God’s time and leading in all that they do, while being genuinely truthful and reflecting honest character at all times. In words echoing Prophet TB Joshua she said, “Beautiful people are those who mirror Christ; let the beauty of Christ be seen in you.” She therefore urged congregants to prioritise service to others ahead of everything else. She concluded, “With Christ Jesus there is no arrogance, so let the fruit of the Spirit be seen in you.”

Power In The Name Of Jesus Christ!

With other segments of The SCOAN Sunday Service not being observed, Pastor Evelyn Joshua went straight into the Mass Prayer session. She read from Luke 2:8-14 and asked congregants to read later from Isaiah 7:14 and Isaiah 9:6-9. “Let the fruit of the Spirit be your trademark,” she told the church.

Evangelist Chisom told congregants to pray: “You demon, unclean spirit, ancestral spirit – anywhere you are, you are darkness. I command you by the light of God: Out!”

Evangelist Joseph told congregants: “Open your heart and contact the Holy Spirit for your healing.” He also prayed: “Whatever spirit causing you sickness – in the name of Jesus: Out!”

Evangelist Ope prayed: “Every garment of limitation placed upon you – Holy Ghost Fire: Out!”

Early in 2022, Sarah was in her restaurant when hot oil poured on her right leg, burning her foot severely. For many months, she was unable to do her business as the foot became too heavy and painful for her to lift. Expectedly, her right foot could not take any footwear. However, all that changed after she received prayer in the name of Jesus Christ as Pastor Evelyn Joshua ministered at the Prayer Line during the service of September 18, 2022. Now, Sarah can do all that she had been unable to do before. She advised people to be prayerful in every circumstance. “You will receive permanently healing,” she testified.

“The name of the Lord is a strong tower,” observed Grace as she started her testimony on Christmas Day 2022. Sometime in April 2022, she had been at The SCOAN Sunday Service and had received ministration of the New Anointing Water by one of the evangelists. In faith, she had brought out her prayer request and her mobile phone, telling the evangelist that she had prayer requests. She also brought out a bottle of water, hoping to have some of the New Anointing Water sprinkle into it. In May, on a trip on the highway in the north of Nigeria, Grace and her husband encountered bandits, who took away the personal effects of many passengers, including Grace’s handset, which had been prayed upon earlier in April at The SCOAN. At the dawn of the following day, something strange happened: One of the leaders of the bandits asked that Grace’s phone be returned to her, thus preventing the likelihood of losing all the money in her accounts. Interestingly, unlike other passengers, Grace and her husband lost not even a single possession. Moreover, they were not marched into the forest. “Trust in the power of the living God, which is in The SCOAN and working through the medium of the New Anointing Water,” Grace told the world by way of advice. Grace’s husband, Kumi, glorified God for sparing his and his wife’s life. “If not for the grace of God in the New Anointing Water, we would not be here today,” he said.

Upon being arrested by the Holy Ghost during the service of December 18, 2022, the demon in Roseline confessed many things. During her childhood, she used to dream about playing with snakes. She also used to see herself in large bodies of water. In the attempt to solve the problem, Roseline’s mother took her somewhere for prayers of cleansing. However, the situation did not get better and she started to have dreams in which a spirit husband would sleep with her and ply her with very strong alcohol. Roseline did not tell her husband about it all, sharing only some with him. Her husband being a prayerful person, Roseline always felt uncomfortable during prayer time. One day, while Emmanuel TV was playing, the Spirit of God caused Roseline to vomit some poisonous substances from her system. Eventually, she agreed to come to The SCOAN for prayer. As God’s power filled up The Arena Of Liberty during the service in question, Roseline attempted to run out of the auditorium but her husband held her back. “It was like someone struck my head with a hammer,” said Roseline about how she had felt following a touch by the evangelist. Since then, Roseline has been sleeping peacefully, with the spirit husband now defeated permanently. Now she has entered into her season of lasting success, as her past is over. “If you trust in the Lord, you will not fail,” she told the church. Her husband testified about the transformation in Roseline’s life, saying that she is now prayerful and happy to watch Emmanuel TV. “God’s time is the best,” he advised the church.

It was a very stubborn spirit indeed that had been troubling the life of Himaga from Adamawa State, Nigeria. On December 18, 2022, however, all of her affliction ended as she worshipped in The Arena of Liberty. As the evangelist neared her, Himaga found her jaws jamming shut and her body feeling unusual. The demon in her subsequently confessed its atrocities before fleeing forever. Earlier, on November 27, 2022, Himaga had got a touch from Pastor Evelyn Joshua and had received her healing from the effects of a terrible accident in which her vehicle tumbled over several times before catching fire. Today, Himaga is a new creature in Jesus Christ and she no longer has dreams in which dead relatives and a spirit husband visit her. In the physical world, she has also started to recover all that she had lost while the demon troubled her life. She equally demonstrated all that she had been unable to do before her healing. “Always give God all the glory while trusting in Him,” Himaga advised the church.

Gifts Of The Anointing Sticker

After the service, Pastor Evelyn Joshua led the presentation of gifts of the Anointing Sticker to congregants.