YOU ARE CREATED TO PRAISE GOD - The Synagogue, Church Of All Nations - SCOAN - Prophet T.B. Joshua (General Overseer) Skip to content 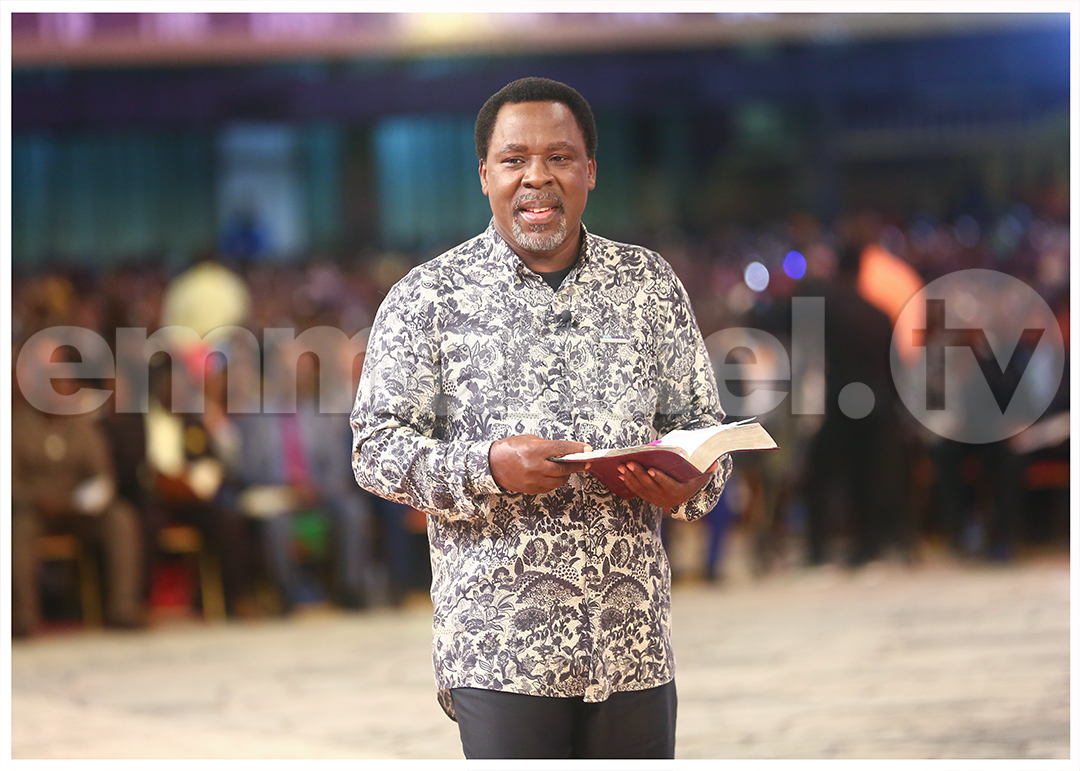 “Son Of David, Have Mercy On Me!” That was how The Emmanuel TV Choir began the worship session of the Sunday Service of October 16, 2022. They went on to acknowledge the Holy Spirit: “God’s Spirit In My Heart Cries Naturally—Abba Father!” “Without You I Am Nothing/Nothing At All, Holy Ghost!” The Holy Ghost focus continued when they declared: “You’re The Light That I See, Holy Ghost!/You’re The Life That I Live, Holy Ghost!/Without You I Am Nothing.” In no time, the presence of the Holy Spirit saturated The Arena Of Liberty and the people reacted by expelling every impurity in them.

Evangelist James started the sermon by reading from Revelation 4:11—“You are worthy, O Lord, To receive glory and honour and power; For You created all things, and by Your will they exist and were created.” Accordingly, the sermon dwelt on the need for believers to worship God always—in good time or bad. Notable examples of such believers were Job, David, King Jehoshaphat and Paul and Silas, who ignored severe adversity and kept praising God. The minister stated that God created humankind for the purpose of praising and worshipping Him.

Evangelist James urged congregants to bear in mind always that God has done so much in the past and will still do more, hence the need not to be distracted by temporary setbacks. In his words: “When we operate in praise and choose to glorify God, strength will flow in us. As we begin to praise God, we are opening the door for God to work in us and through us.” The preacher therefore charged those facing challenges to ignore common-sense evidence and act in faith by leaving the battle to God. “The battle for survival,” he noted, “is not a personal challenge but one against your God.”

Evangelist James also stressed the fact that no one can praise amiss, since praise easily rouses God to the believer’s defence. In concluding he said: “Ordinarily, your situation may not call for thanksgiving and praise but you can choose to do what you have never done before in order to achieve what you have never had before. Make praise part of your daily life. Keep your mind set on things above. Don’t let the cares of this world pull you down, because if God be for you, who can be against you?”

Standing In The Gap For The People

On all who had come from far and wide with various issues of the body and mind Pastor Evelyn Joshua laid anointed hands, alongside the evangelists. Starting the process, Pastor Evelyn Joshua prayed: “Father Lord, we thank You. Jesus Christ, we bless You for this wonderful day. We glorify Your holy name for making it a reality in our lives….”

She continued: “You are the faithful God. You are the merciful God. You are the just God, the Holy One…. Father, grant our requests and fill our hearts with Your joy. Almighty God, heal Your children from every wound and hurt today, in the mighty name of Jesus Christ! Father, deliver them from every shackles of the devil! Free them, O Lord!”

She then prayed for cases of diabetes, difficulty in walking, prostate cancer, swollen belly, anaemia, liver enlargement, attention deficit hyperactivity disorder, bronchopneumonia, epilepsy, hernia, difficulty in urinating and leg ulcers. As the Holy Spirit affected the faculties of the woman of God, the people sensed the power of divine healing immediately.

Among the prayer recipients were pregnant women seeking God’s face for the safe delivery of their babies.

Soon afterwards, the evangelists joined the woman of God in invoking the fire of the Holy Ghost on all contrary spirits in the lives of the people and they began to feel a breath of fresh air in every sphere of their lives. Indeed, no demon was too stubborn for the Holy Spirit. “Leave now, in Jesus’ name!” the evangelists commanded.

Barrier-Breaking Prayer For All!

Began the woman of God: “Get rid of doubt by looking in faith to Christ Jesus. Get rid of your fear and problems. The power of fear is conquered!” She then prayed: “Spirit of the living God, fall afresh on us! Melt us! Remould us! Feed us! Bless us! Forgive us! Heal us body, soul and spirit, in the name of Jesus!”

She went on to urge congregants to ask for forgiveness of all known and unknown sin, as well as to do away with every root of unforgiveness. He prayed: “We command the healing power into your life right now, in the mighty name of Jesus! Be healed from every affliction, infirmity, disease!”

Evangelist Chisom told congregants to pray: “Every spirit that is not of God operating in my life: Out! Every spirit from my past that is threatening my past and my future: Out!”

Evangelist Joseph told congregants to pray: “You spirit, demon—ancestral spirit, spirit of darkness: Out! You demon, wherever you are: Holy Ghost Fire!”

Evangelist James told congregants to pray: “That spirit of limitation, stagnation in your business, finances, marriage, career—command it out, in the name of Jesus!”

In a Mass Prayer clip, Prophet TB Joshua decreed: “The spirit that caused you pain, affliction, hardship, stagnation—right now I command that spirit to pack, in the name of Jesus! For the glory of God, be captured! Every spirit that is not planted by God—I command you to leave my people! Receive that authority that heals, delivers, blesses—receive, in the name of Jesus!”

In rounding off the prayer session, Pastor Evelyn Joshua declared: “O Lord, Jehovah-Nissi! Father, we thank you for giving us victory over every power of darkness…. By Your name Jehovah-Jireh, Father, we thank You for providing for us to own, for proving for us according to your glorious riches in Christ Jesus. Father, by Your name Jehovah-Rapha, we thank You for healing us today of every infirmity, disease.”

But For God’s Power In The New Anointing Water, My Left Leg Would Be Gone!” Says Medical Student

In 2013, teenage Michael had disobeyed his mother and wandered out of the house. Somehow, he ended up stepping on some strange object. Within days, his left leg had become virtually impossible to use. His mother, Chidinma, a police officer who had been facing stagnation in her career, immediately threw all that she had into his care. She spared no expenses as her boy spent months in hospital. Despite ingesting an uncountable number of antibiotics, Michael did not witness any improvement. In fact, the leg was now at the risk of wasting away, even as the aspiring medical student continued to feel excruciating pain. “I wish I had listened to my mother,” he kept moaning in pain. After months of Michael’s hospitalisation, during which period his mother had been running helter-skelter in search of a solution, the New Morning Water came into the picture. “Administer this to your son prayerfully,” Chidinma’s friend had told her. Although the leg was getting close to being condemned, God’s power in the New Anointing Water immediately restored it to life. The morning after the ministration, Michael was ready to go home—to the glory of God Almighty! However, the doctors agreed to release him only three days later, after assuring themselves about the evidence before their very eyes. Michael’s life soon returned to normal and he could do all the things he had been unable to do before. Today, he is in medical school and has a clearer understanding of what had happened to him and the severity of the risk he had faced. “Stay with God,” he advised the people. “This leg would have been gone if we had taken the advice to see a witch doctor,” he told the church. Chidinma herself testified about the divinely ordered promotions that she subsequently received after starting to place her faith in God. In 2014, for instance, she got promoted after a period of stagnation. Since then, she has also gained further promotion and is now an Assistant Commissioner of Police. During The SCOAN Living Water Service of September 30, 2022, she received healing from lumbar spondylosis, liver enlargement, ulcers and other ailments. “Everything disappeared,” she said. She advised people to love God with all their hearts. “Remain calm and focused when facing challenges,” Chidinma added.

On Sunday, October 9, 2022, Ijeoma was one of those who received their deliverance from ancestral demons. While growing up, she used to participate ritual ceremonies organised by her family for appeasing the demons, who soon noticed her. “You must serve us,” the demons kept whispering into her ears. “Never!” Ijeoma would fire back. “I shall never do your bidding,” she would insist. To punish for her stubbornness, the demon gave her nightmares, illnesses, stagnation and endless disappointments. After her deliverance, however, the situation has changed. “I had a dream in which I vomited all the poisons in my system,” she told the church. She added, “I also dreamt of getting a contract.” She said she has also stopped feeling hot in her feet. “I used to wear only slippers before,” she explained, “but now I can wear shoes without feeling any discomfort.” For solutions to their issues, she advised people to approach God, the Author and Finisher of our faith.

Ceased Menstruation Of One Year Restored After Mass Prayer!

Glory testified about the restoration of her menses after attending The SCOAN Sunday Service of October 9, 2022. She was also freed from the spirit that had been giving her frightening nightmares in which she ate with strange people. During the Mass Prayer session of the service, Glory had believed with her full heart and the Lord heard her cry. The following morning, she found her menses had returned after one year. “Just believe, wherever you are,” she advised the church. “It does not matter whether you were touched or not – as was my case,” she noted.

“It was too bad,” said Azuka in reference to the pain he had been suffering from difficulty in walking. “I wouldn’t wish it on my enemy,” he added. Declaring himself free from pain, he discarded his two knee braces and demonstrated his healing by walking around without any aid.

During the Mass Prayer, Chidinma vomited the poisonous substances that had been causing her stomach pain.

Luke was healed of difficulty in walking due to waist pain. “What I could not do before I am able to do it now,” he said. Now he no longer needs a lumbar corset to move around.

Margaret from Akwa Ibo State was healed of lumbar spondylosis, which had caused her pain for the last seven years. “My sisters brought me here today,” she said. “But now I am happy and speechless,” she added. Now no longer needing her lumbar corset, she advised people to hold on to God.