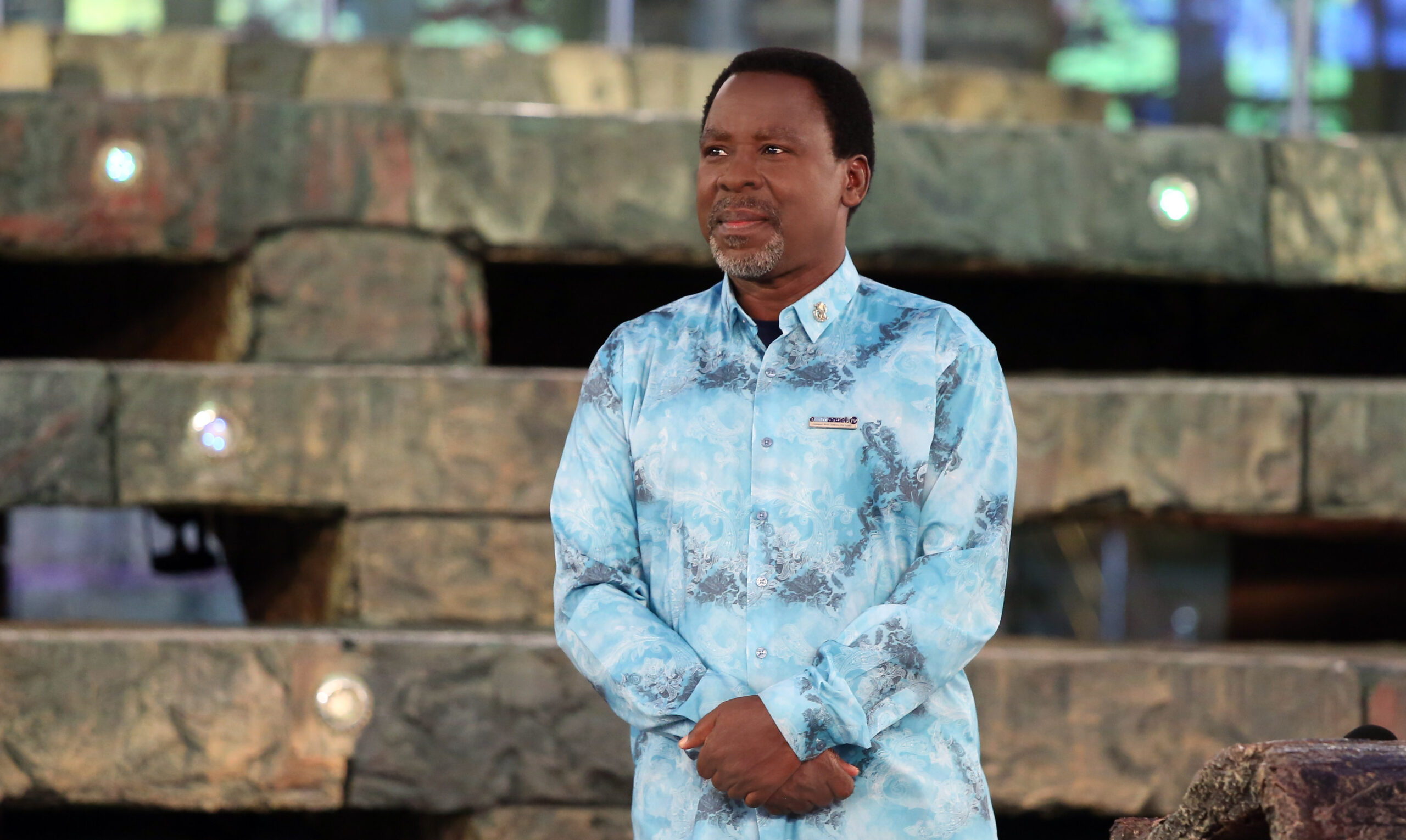 For followers of the TB Joshua Ministries all over the world, Friday, September 30, 2022 will remain yet another unforgettable day. It was the day that The SCOAN Living Water Service returned, under the leading of the Holy Spirit and the leadership of Pastor Evelyn Joshua.

In March 2020, God’s servant Prophet TB Joshua had presided at the last SCOAN Living Water Service, which was broadcast live on Emmanuel TV. Shortly afterwards, the man of God, being a dutiful Christian and good citizen, had advised church members to stay home in obedience to the government-imposed lockdown order following the medical emergency of the period.

However, the Holy Spirit nudged Prophet TB Joshua into action in another direction, urging him not to leave God’s flock unattended. The man of God therefore commenced the Distance Is Not A Barrier Interactive Prayer Sessions, a series of programmes through which he and the evangelists ministered prayers of healing, deliverance, breakthrough and salvation to the people virtually. Endless indeed were the testimonies that derived from those novel ministration sessions—a model that many other ministers later adopted!

Interestingly, God’s servant had transited the world only about two days after praying virtually for patients at a COVID-19 isolation camp on June 3, 2021. Blessed remains the memory of the righteous!

Although official publicity for The SCOAN Living Water Service of September 30, 2022 had lasted just a little over a week, thousands stormed The Arena Of Liberty from all over Nigeria, Africa and the rest of the world, certain that Jesus Christ would meet them at the point of their needs. And indeed, the God of Prophet TB Joshua moved mightily in the midst of the people!

To start the service, the evangelists led the people to pray thus: “O Lord, O God, by Your divine mercy free my heart! O Lord, by Your divine favour, free my spirit to follow You and to receive all of Your blessings that You have in store for me today. In Jesus’ mighty name we have prayed!” Then followed the ministration of worship songs by the Emmanuel TV Choir. In no time, the Host of Heaven descended into the auditorium to affect The SCOAN Altar Of Prayer with divine presence.

“Good Morning—it is a new dawn!” greeted Pastor Evelyn Joshua once she got on the Altar. She then prayed: “Lord God Almighty, lead, teach, protect, nurture us, in the mighty name of Jesus! Let the doorway of blessings, healing, deliverance be opened to us today, in the name of Jesus!”

She began her short exhortation by reminding congregants of Prophet TB Joshua’s words: “A man cannot be a loser by doing what pleases God.” In her own words, “Freely Prophet TB Joshua received; freely he gave us.”

The woman of God moved on to read from John 9:6-9 before declaring upon the people: “You will be washed, soaked by the Blood of Jesus Christ for the salvation of your soul…. All who have seen you as a rejected stone will see you as the chief corner stone, in the name of Jesus!”

In making a point about giving for Christ’s sake and being a value adder to others, Pastor Evelyn Joshua identified four categories of people in everyone’s life: those who add, those who subtract, those who divide and those who multiply.”

She then told congregants, “For the fact that you are here, you are blessed, healed, delivered, linked up with God!” On that note, she deemed it necessary to show them a video clip from a past Living Water Service where Prophet TB Joshua had told congregants: “Ask God for His mercy so that you will not receive the judgment you truly deserve…. If you are to go there by yourself, you will get ordinary water.”

Further, the woman of God told congregants to pray: “My heart, hear the voice of God! Hear the voice of the Holy Spirit, in the mighty name of Jesus Christ!” She also told them to touch Prophet TB Joshua’s Bible as they made their way to The Altar Of Prayer. And as the people meditated there, all negative spirits in them were exposed by the Holy Spirit.

The following are among the cases of instant testimonies recorded at The Living Water Service.

Christopher from Ghana came with kidney issues. “I felt a cold sensation all over my body,” he said of how he had felt while on The SCOAN Altar of Prayer. “Now I am fine,” he smiled.

Monica came with the problem of difficulty in walking but went home fully healed and impacted by God’s power.

A woman from Botswana was healed of difficulty in walking and eye issues.

Sunday can now kneel and squat again! For the last seven months, his knees had been uncooperative.

This man saw angels right on The SCOAN Altar Of Prayer!

For 60 years, Helen could not smell at all—a condition she inherited from her father. Glory to Jesus Christ for the medium of the New Anointing Water!

A man from Uganda was healed of arthritis after meditating on The Altar of Prayer.

In a vehicle outside the church auditorium was a man who had suffered from a partial stroke for the past three months. After the Living Water was ministered on him, he received his healing and began to walk again!

After visiting The SCOAN Altar Of Prayer, this Mozambican man with vision and diabetes issues received his healing.

“I felt a shocking sensation,” said a happy Mr. Ben after visiting The SCOAN Altar Of Prayer and receiving his healing from lumbar spondylosis.

A woman who had gone to The SCOAN Altar Of Prayer in pain came back healed!

This man’s eye problem since 1995 became a thing of the past!

Henry’s problem of glaucoma was so severe that he was unable to identify his children. To God be the glory, he received a clear vision on The Altar of Prayer!

Healed Of Blindness After Ministration Of New Anointing Water

While returning from work one evening, Mrs Moses got stung in the neck by a bee. A day later, she began to notice a swelling in her eyes. She then started to move from place to place in search of a solution. Eventually, a doctor suggested surgery. To the glory of God, however, a neighbour introduced Mrs Moses to the New Anointing Water, which she began to minister on the eye. In time, the swelling went down and the black spot that had now covered her iris cleared off. It was indeed a surprise to her doctor when he saw her again, fully able to see with her two eyes! Now she is back to work! In another testimony, Mrs Moses said that during prayerful meditation along the premises of The SCOAN she had felt a wind blow across her. On returning to her lodgings, she had urinated blood—yet another sign that God’s power was at work in her life. She advised people to exercise faith in God’s ability to heal them. Her neighbour glorified the God of Prophet TB Joshua for the healing.

“We Came In Tears But Returned With Joy In Our Hearts!”

On July 17, 2022, Sunday received prayer over the problem of difficulty in walking caused by injuries sustained in an accident. Despite getting medical attention, he had felt little or no relief, with excruciating pain keeping him unable to tend to his business. Following prayer by Pastor Evelyn Joshua, however, Sunday went home with his healing and today he can drive, walk, run and handle his business without any issues. His wife held the crutches for display as she glorified God for the miraculous healing. “We came here in tears but we returned home with joy in our hearts,” she said. Sunday advised people to put their faith in God.

An End To 10 Years Of Barrenness After Living Water Service!

In March 2020, Mabel had been a participant at The SCOAN Living Water Service presided over by Prophet TB Joshua. As at that time she had been married for 10 years without bearing a child. During the service, she had had a heart contact with God and had vomited afterwards. On returning home, Mabel fell pregnant that very month. Holding her baby, Chiemela, for the world to see, Mabel was full of excitement as she testified before the world. “Believe in God; He will visit you,” she assured congregants. Her husband told of how his family had faced reproach during the period of barrenness, although he had kept his faith in God. He advised people to believe that God always has something in store for them.

People of God, there is no doubt that God values processing more than results, as the return of the Living Water Service has shown. As such, let us endeavour to wait patiently on Him for directions on the affairs of our lives. God’s time remains the best. Emmanuel!