ARE YOU PREPARED? - The Synagogue, Church Of All Nations - SCOAN - Prophet T.B. Joshua (General Overseer) Skip to content 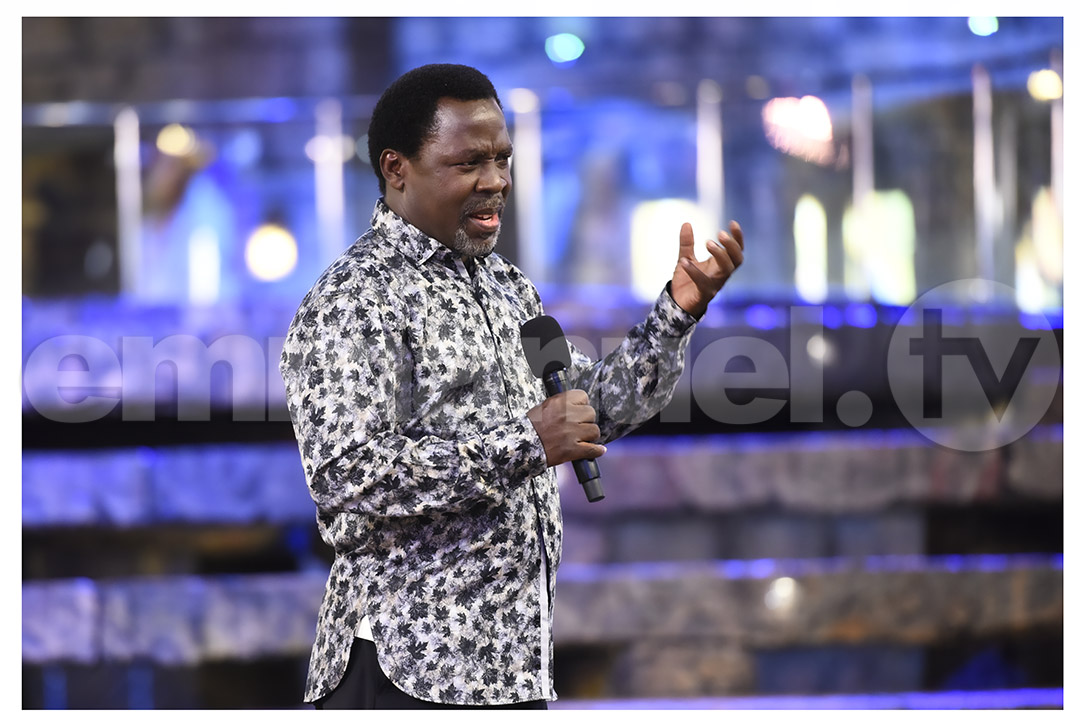 The ground for the sermon of Sunday, September 18, 2022 had been prepared when The Emmanuel TV Choir performed song after song dwelling on the theme of living for Jesus Christ in the determination to make Heaven. Two of such songs were “Sin’s Power Over Me Is Broken” and “I Surrender All”—songs which brought many congregants into a state of brokenness as they bowed before the Throne of Grace.

“Are You Prepared?” That was the title of the soul-piercing sermon given by Evangelist Ope, for which he read the proof text of Revelations 22:11-13. “Many are living in this world as if they will never leave this world,” the preacher noted while comparing the world to a marketplace. He then posed the critical question: “After this life is over, where are you going?”

Because no one is sure of when Christ will come, Evangelist Ope said, it is necessary for every Christian to stay vigilant and watchful always while avoiding “worldly considerations, fleshly desires and accumulation of wealth in complete neglect of eternity.” According to him, “A focus on materialism can divert one’s devotion from God Almighty to the god of wealth.”

In further pressing home the message, he read from Mark 8:36, Luke 12:16-21 and other passages before asking congregants to be sincere with themselves in answering the question as to their eternal abode should Jesus’ Second Coming happen now. On that note, he said that not being prepared is in fact an indication of lack of belief. He therefore urged congregants: “When you look beyond now, you will be careful about what you are doing now. Beyond now is judgment and Eternity!”

The Age Of Miracles Has Not Passed!

As the woman of God moved from case to case, prayer recipients saw the fire of the Holy Spirit consume their afflictions, such as cancer, asthma, hernia, goitre, sickle cell anaemia, epilepsy, difficulty in urinating, difficulty in walking, hepatitis, mental disorder and haemorrhoids, etc. Indeed, God’s power stays steady and sure in the lives of those who diligently and faithfully seek Him!

Also mighty beyond description was the impact of the Holy Spirit as evangelists Joseph, Ope, James and Chisom joined Pastor Evelyn Joshua in the ministration of prayers of healing, deliverance and breakthrough for the ultimate salvation of souls. “Your back on the floor!” they commanded every stubborn spirit.

An Encounter With The King Of Kings!

Pastor Evelyn Joshua began the Mass Prayer session by assuring the church: “The position of God in your life is power, peace and comfort.” She then prayed: “Father, speak strength into us, in the mighty name of Jesus! Every trouble, pain that held you in bondage—I command the healing power of Christ into your life.”

For the viewers the woman of God prayed: “Every yoke of limitation in your life—we command it out, in the mighty name of Jesus! Every fake person around you, disorganising your life—God will expose them right now, in the mighty name of Jesus!” She then told congregants to assert thus: “I am linked up with God! I am not on my own! Christ lives in me! My prison door is opened!”

Evangelist Chisom told congregants: “Command that contrary spirit to come out! That spirit from your past that threatens your life, peace—command it to come out!”

Evangelist James told congregants: “Every spirit that challenges your destiny – unclean spirit, familiar spirit – command it out! That spirit challenging your business, family, destiny—say: Out!” He also prayed: “Whatever satan must have used to connect you, your business to himself—be broken, in the name of Jesus!”

Released For Breakthrough After Wife’s Deliverance!

When an anointed hand fell upon Juliet on Sunday, September 11, 2022, she drifted into a manifestation session during which the foul spirit in her confessed before succumbing to God’s power. In childhood, Juliet’s mother used to call her an ‘ogbanje’, meaning a female child belonging to the marine kingdom. In her search for a female child, the older woman had appealed to marine spirits, who granted her request after a snake ran across her legs at the stream. Growing up, Juliet had a poor relationship with her mother, who constantly beat her up and made her do fruitless exercises, such as fetching water multiple times from the stream only for the water to be poured away by her mother. During her school days, Juliet had an experience in which she lost her memory after an ill wind blew into her ears while writing a letter. She also had serious issues with her children, as she found it hard to warm up to them. Similarly, she had a severely strained relationship with her husband. Owing to the spirits troubling her life, Juliet was a constant source of disappointment and setback for her husband, with numerous business opportunities lost once she was told about them. That story changed, however, after Juliet was delivered. Now, she is completely free from the actions of the spirit husband that had been manipulating her life via dreams in which she kept fetching water and nursing babies. She advised people to run to God for solutions to life’s issues. Her husband, Uche, told of how his home has now become peaceful. “I now sleep on the bed, beside my wife, without having bad experiences or pain in the body,” he said. Regarding the contract he was about to lose before his wife’s deliverance, Uche said it was awarded to him. “There is God here,” said Uche about The Arena Of Liberty.

Fatimah’s problem began sometime in primary school. One day, she had suddenly seen a pool of water that was not visible to others. When she got home, she started to shiver and soon fell ill. “A huge man appeared to me and asked me to keep quiet,” she recalled. From then on, she became secretive, hardly ever opening up on issues in her life. She constantly had dreams in which she would see herself in the water as a princess. If anyone offended her, she only needed to look at the person in a certain way and they would experience something bad. After rejecting invitations to work for evil forces, Fatimah left the village and her relationship, which had produced five children. “Thereafter, every man who proposed to me met with misfortune,” she told the church. Eventually, she met a man who advised her to visit The SCOAN for prayers. Clearly, it was the spirit in her causing her malice. Following a divine touch at The SCOAN on September 11, Fatimah became a new creature in Jesus Christ. To the glory of God, shortly after her deliverance, she received news that a visa for which she had applied three years ago is now ready—a sign of open doors indeed! “Now I am no longer ruled by the spirit of anger; neither do I have those nightmares anymore,” she added. She advised parents to pray for their children always.

Restored To Stupendous Wealth After A Touch From God’s Servant TB Joshua!

Success, a Liberian living in the USA, testified about how his life had turned around for good after a prayer encounter with Prophet TB Joshua sometime in 2016. In 2014, Success had lost all his fortune after ignorantly importing materials for solar energy into Liberia, against the government regulation that forbade individuals from importing such items. From then on, Success started to live from hand to mouth and friends started to desert him. On the streets of Liberia, many derided him as “former rich man”. With nowhere else to turn, however, the former hater of Prophet TB Joshua began to follow Emmanuel TV and finally decided to make his way to The SCOAN for prayers. There, he received a touch from the man of God and he was so satisfied that he was eager to return home. And as he made his moves, every step along the way assured him that God was indeed handling his case specially. First, although Success had been away from the USA for over six months, authorities allowed him to re-enter the country—quite unusually. Secondly, Success applied for US citizenship as the man of God had advised him in Lagos. Again, authorities did not decline his request—also quite unusually. Thereafter, Success had a dream encounter in which God’s servant prayed for him and urged him to be a blessing to others. From then on, breakthroughs began to happen in his life. Today, Success is the owner of multiple businesses in the USA and Liberia, including haulage, microfinance banking, large-scale farming and livestock production. Success asked for God’s forgiveness for not having testified before the transition of Prophet TB Joshua, even as he marveled at how God had transformed his life. He advised people to use their wealth, success and breakthrough to honour God.

The following testimonies were read out as sent in by people from all over the world:

For two years, Comfort from Ghana suffered from lumbar spondylosis and was barely able to walk despite using a lumbar corset. During the Prayer Line ministration by Pastor Evelyn Joshua, she had felt the cold draught of God’s. Now she can bend and turn her body in all directions, even as she can walk with ease.

Sunday from Anambra State testified about his healing from pain that had caused him sleepless nights for close to three years. Despite taking numerous herbal and orthodox medications and using a waist brace, he had got little or no respite from the pain. “Now I can run,” he said while discarding his walking aid.

Felicia from Delta State testified about her healing from difficulty in walking caused by partial stroke. It had all started a year back when some strange liquid trickled on her body while inside the shop. Felicia also parted ways with her lumbar corset. Glory be to Jesus Christ!