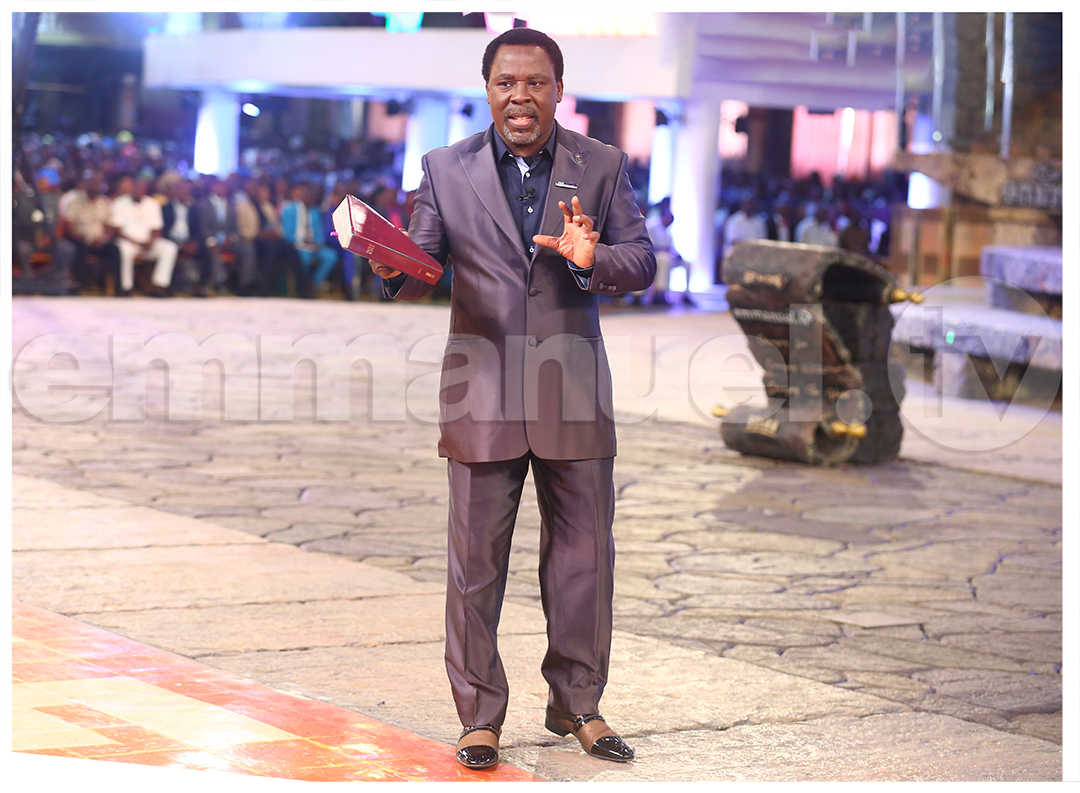 For the service of August 7th, 2022, The Emmanuel TV Choir left no stone unturned in their efforts to help congregants and viewers all over the world to connect with the Spirit of God through heart worship. To start with, there was a solo rendition of the gospel classic “Have Thine Own Way, Lord”. Afterwards, Esther of The SCOAN Sunday School delivered opera-style performances of “What A Friend We Have In Jesus!” and “Holy, Holy, Holy!” The full choir then launched into a medley of moving worship songs, including compositions by God’s servant Prophet TB Joshua. As some shed tears of penitence and longing for God, others vomited the impurities in their systems.

When Pastor Evelyn Joshua joined congregants for ministration of the Word, she too flowed with the spirit of song as she rendered the classical composition “Trust And Obey”. After making a few observations about the inevitability of challenging times for the Christian and how God has made provisions for them to overcome, she announced her sermon title as “God’s Unseen hand Behind The Scene”, taking her proof text from Exodus 14:13-15, 21-22.

“It is not human sympathy that gives you strength and courage,” she noted, drawing from Genesis 37:12 as she insisted that only “courage and strength derived from God Almighty” can help the Christian to navigate the storms of life successfully. As such, she urged congregants to rest assured that they cannot be tested beyond their God-given capacity. She also asked them to watch out for the new thing God is about to do in their lives.

Healing And Deliverance With The Word And Spirit Of God

At The Prayer Line, the woman of God prayed thus before starting to lay hands on the physically and spiritually ailing: “May the healing, deliverance power of our Lord and Saviour Jesus Christ fall upon you, in Jesus’ name!”

As Pastor Evelyn Joshua moved from case to case in The Arena Of Liberty, the power in the name that never fails took control of hypertension, asthma, difficulty in walking, pregnancy complications, mental issues, career stagnation, skin disease and drug addiction, etc. As each person stepped into a new lease of life, following an anointed touch, they exclaimed excitedly: “Thank You, Jesus!”

More of God’s raw power became visible when evangelists Ope, James, Chisom and Joseph joined the woman of God to minister prayers of healing, deliverance and breakthrough to the congregation. Every foul spirit confessed its malicious agenda before falling at the command of Jesus Christ!

Connecting With God’s Spirit For Healing, Deliverance And Breakthrough

Evangelist James prays: “That family, ancestral curse tormenting your life, family – be broken, in the name of Jesus!” You sickness, disease tormenting my life – I command you out!”

Evangelist Chisom told congregants: “That sickness that threatens your joy, peace, that robs you of your joy—command it to come out!” He told them to decree: “You sickness, disease, affliction, anywhere you are in my body, organ—I command you out by the Blood of Jesus!”

In a Mass Prayer clip, Prophet T.B. Joshua told congregants: “With all your heart, speak to the Lord and bring Jesus to the scene.” He prayed: “I command that nightmare to leave you, your career! That problem in your health—receive solution, in the name of Jesus!” He also pronounced blessing and breakthrough on the people’s finances, business partners, marriage and family in the name of Jesus!

“I Am No Longer A Rejected Stone!” Declares Woman Freed From ‘Giant Man’

“She’s going to die single!” boasted the evil spirit in MaryAnn as Evangelist Ope laid an anointed hand on her. The evil spirit was a ‘giant man’ – a masquerade spirit – who had afflicted MaryAnn with the spirits of stubbornness and lust. At 17 years of age, MaryAnn had fallen pregnant, to the dismay of her family, who rejected her outright. Cut off from her family, MaryAnn sought recourse to marriage. However, marriage provided no relief as the pattern of rejection continued. Along the line, she began to experience relentless bodily pain and emotional anguish. Abandoned by her own family and unable to find succour in marriage, MaryAnn began to get suicidal. Before she could take her own life, however, she discovered Emmanuel TV and began following God’s servant Prophet TB Joshua. To the glory of God, MaryAnn began to experience breakthrough and she started her own business. Now prospering in business, she felt the next thing would be to receive her total deliverance. Consequently, she came to The SCOAN for prayers on Sunday, July 31, 2022. Immediately she stepped on the premises, however, MaryAnn found herself feeling dizzy. That feeling of discomfort, it transpired, was actually evidence that the Spirit of God was already working in her. And the confirmation came when the ‘giant man’ was exposed after an anointed touch by the evangelist! MaryAnn advised people, “Be patient, no matter your condition.”

When he sat before the woman of God to receive prayer on Sunday, July 31, 2022, Frank from Anambra State had looked disoriented by pain. But for a black tuft close to the front, his head was virtually hairless owing to the ravaging effects of a mysterious skin disease that had defied medical solution for the last two years. His body and face were riddled with sores, causing people to isolate him. A firm believer in God’s power, he never gave up on his situation, so he had kept on praying. And on the day in question, God’s Right Hand fell upon him as Pastor Evelyn Joshua ministered the prayer of healing. “Now there is no more skin irritation and I do not feel any pain at all in my body,” Frank testified during the service of August 7, 2022. In demonstration of his gratitude, he had started his testimony by quoting Psalms 109:30 before singing about God’s favour upon his life. “Whatever challenges you have, you should patiently wait on God,” he advised people.”

Our God Is Alive: Family Deliverance And Healing During Prayer Line Call!

Esther testified alongside her family about her deliverance from the spirit responsible for frightening nightmares. On one of her nightmare-troubled nights, she had feared she was about to die. Once she roused herself from the nightmare, she woke up her husband and daughter and they called one of the Emmanuel TV Prayer Lines. As Esther received prayer, she began to feel the impact of the Holy Spirit in her body, meaning that the foul spirit in her was being expelled. Interestingly, Esther’s daughter, Annabel, also fell under the anointing and she began to scream and writhe on the floor. The young girl had been having chronic ear issues leading to pus oozing from her ears and making other children uncomfortable around her. Now, she is completely healed in Jesus’ name! Annabel advised other children to believe in God. Her father confirmed both testimonies and advised people to wait for their time. Now free from the spirit causing nightmares, Esther said with a broad smile, “I now sleep like a baby.”

The foul spirit in Christy had wanted her to be useless to herself, her family and the world. It had all started when Christy was a little girl, after a strange male figure appeared to her in the dream. Right from that day, she began to have issues in all areas of her life, especially in her academics and business. Although she had acquired at least three vocational skills, Christy could not make ends meet. Eventually, she took to a wayward life and eventually fell pregnant for a man who abandoned her, blocking her on all social media platforms. After narrowly escaping an accident, Christy received treatment that involved powerful injections that could have terminated her pregnancy but the baby stayed unharmed. Virtually helpless, Christy had only her mother as support system and left the baby with her. Although she had been to The SCOAN on two previous occasions, the Sunday Service of July 31, 2022 was Christy’s own special appointment with destiny. Upon being touched by an evangelist, Christy responded to the fire of the Holy Ghost and now her case has changed for good. Not only is she no longer being accused falsely by people, she has also stopped having nightmares. Her mother has also reported improved business at her base in Kaduna State. Before concluding her testimony, Christy advised young women like herself to rely only on God.

For These Two Sisters, It Is Freedom From Ruinous Spirit Husband!

For decades, Paulina was tailed by a ‘strong man’, who ran her life in such a way that she kept losing her children and helpers. Buffeted by the storms of life, especially after losing her husband, she began to experience serious health issues, including high blood pressure. Unable to get effective medical help, Paulina took her case to God after being introduced to Emmanuel TV. On July 31, she made her way to church and the Spirit of God visited her mightily, delivering her permanently from satan and his agents. “Keep believing in God no matter what you are passing through,” she advised people.

Paulina’s sister, Mercy, was also touched by God’s Spirit during the service. She told of how she had used to see part of her hair cut off every three months, after having a particular dream. In real life, she began to experience severe chronic headaches. In her adolescence, Mercy had found herself being dogged by dangerous spirits. As she grew older, she began to notice other issues such as dreaming about and seeing snakes in real life. She also experienced stagnation and hatred from even people to whom she had been nice. After discovering Emmanuel TV, Mercy began to follow ministrations by Prophet TB Joshua. Within a short while, the headaches stopped as the evil spirit could no longer cut her hair. Now, Paulina no longer eats in the dream or see the spirit husband. “God is on the throne—believe in Him,” she advised people.

Chiwendu had inherited the condition of hypertension from her mother, causing people to frighten her with the threat that she would soon go her mother’s way, that is, die before her time. To prevent the prediction from coming to pass, Chiwendu took all medical care once she was medically confirmed to be hypertensive 11 years ago. At that time, she was heavily pregnant. But she believed in God’s ability to heal her. So, on Sunday, April 10, 2022, she presented herself for prayer before Pastor Evelyn Joshua, who ministered the New Anointing Water on her. Advising people, she said: “Believe!” Chiwendu’s husband, Emmanuel, glorified God for stepping into his wife’s case and proving the power in His mighty name. There was also a testimony for the couple’s children, Michael, who received prayer over a scrotum hernia. “The swelling started disappearing gradually,” reported Emmanuel. When the hernia finally vanished, the boy’s parents took him back to the hospital, where doctors confirmed the healing, wondering how it managed to happen. Emmanuel advised people to be patient when looking up to God. “God will locate you once your case file is opened,” he said. Michael confirmed no longer feeling pain and having any swelling.

It was instantaneous healing for Bosede and Oluwatoyin during the Prayer Line/Laying Of Hands as both received perfect healing for the problem of inability to walk. Bosede had lost balance in her legs after experiencing spiritual attacks in her dream. On her part, Oluwatoyin had suffered inability to walk after twisting her ankle. Despite undergoing series of medical examinations and taking several medications, the sisters’ conditions failed to improve and in fact worsened. Realising that their problem was beyond the physical, they opted to visit The SCOAN for prayer. To the glory of God, they received their healing after anointed prayers by the woman of God. Indeed, it was a huge relief for the entire family as they blessed God’s name for the miracle. Mavins, Bosede’s husband, was overwhelmed with joy, realising that a huge burden had been lifted off him.