THE WORDS OF YOUR MOUTH - The Synagogue, Church Of All Nations - SCOAN - Prophet T.B. Joshua (General Overseer) Skip to content 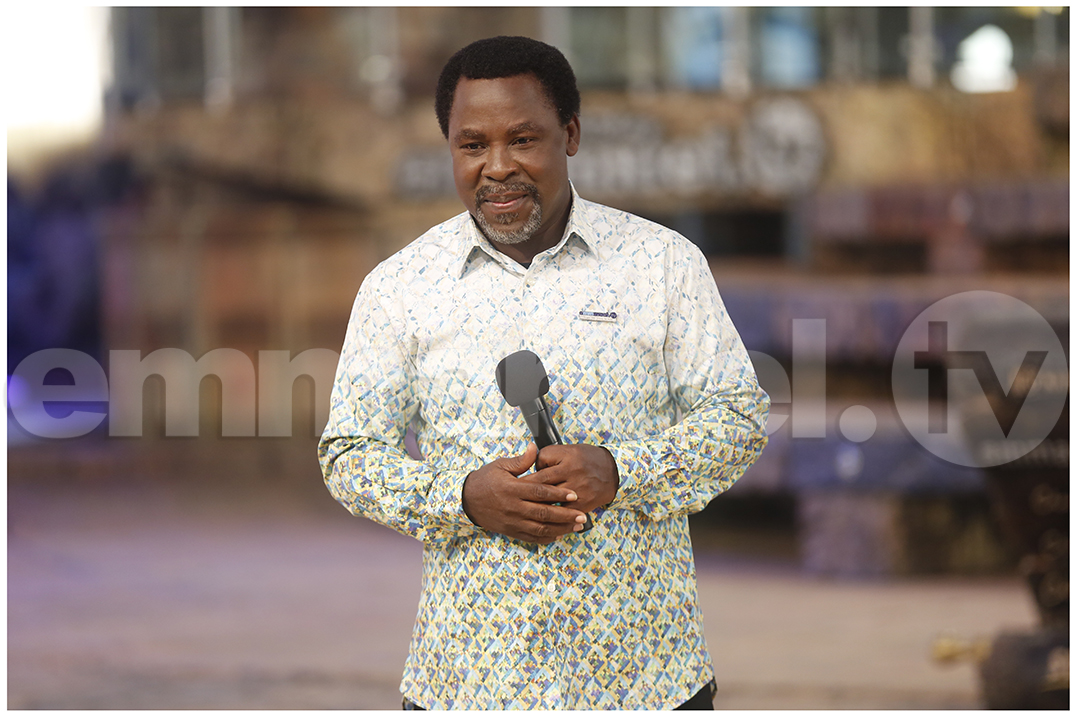 With the words of their mouth, The Emmanuel TV Choir confessed their total surrender to the Almighty. They asked Jesus Christ, the King of Zion and the Lion of Judah, to reign over theirs and the affairs of congregants and viewers all over the world. “I Am The One That You Have Shown Mercy,” they sang further. Soon, the atmosphere in The Arena Of Liberty became filled with the effectual presence of the Holy Spirit.

Once Evangelist James stepped on The SCOAN Altar, he announced his sermon title as “The Words Of Your Mouth” and his proof text as Proverbs 6:2. “Today,” he said, “we do not pay attention to the words we speak and their consequences,” even as he noted that our words, like our thinking, can either imprison us or set us free. In remarkable words he observed: “Your words are the standard of your faith. With your words you constantly paint a public picture of your inner self. That is, your words reveal the kind of heart you possess.”

In explaining the sermon, Evangelist James cited Luke 8:11, Isaiah 53:5, John 8:36, Exodus 14:14, Psalm 29:11, Philippians 4:19, Job 22:28 and 1 Samuel 17:41-47, among others. With such Bible passages, the preacher stressed the importance of making positive confessions only and thus avoiding the hold of poverty, sickness, failure and fear over our lives. “Whether we realise it or not, we are sowing words,” he said.

He therefore advocated gaining possession with positive confession that is steady, not wavering. “The penalty,” he noted, “for wavering in our confession is that we deny ourselves God’s promise and the performance of it.” He also urged the church to rely on God’s Word always, while confessing belief rather than feeling. In his concluding thoughts, he counseled the church: “Therefore, this is what you should always say constantly: ‘God is who He says He is. I am who God says I am. God can do what He says He can do. I can do what God says I can do. God has what He says He has. I have what God says I have’.”

A Touch That Breaks Yokes

To those who had been assembled at The Prayer Line, seeking healing and deliverance for breakthrough, the Spirit of God manifested itself powerfully during the service of July 10, 2022. In interceding for the people, Pastor Evelyn Joshua prayed: “Father Lord, we bless Your name…. Let the doorway of blessings be opened to us, in Jesus’ name! Give us testimonies that will confuse satan and his world today, in the mighty name of Jesus Christ!”

Following those words of prayer, the Holy Spirit took over The Arena Of Liberty and expelled every foul force in the people’s bodies as the laying of hands commenced. Cases such as difficulty in walking, skin disease, asthma, cancer, tuberculosis and ulcers were eliminated by the cleansing power in the Blood of Jesus Christ.

Indeed, the anointing was freely available as the woman of God and the evangelists moved further into the midst of congregants, laying hands upon them in the indomitable name of Jesus Christ. As foul spirits were expelled, the people walked into their permanent freedom for the glory of God.

Before starting the Mass prayer session, Pastor Evelyn Joshua read from John 3:31-33. She told the church, “Make sure that your heart does not condemn you.” She also told them to pray: “Holy Ghost power, come into my life and begin to do new things!” She further prayed, “I stretch out the power of healing into your life right now! Receive! Be healed from every pain, sickness, affliction, disease!”

Evangelist Ope told congregants: “That spirit tormenting you, causing you nightmares—command it out, in the mighty name of Jesus!”

Evangelist James told congregants to pray: “Thou power of deliverance—fall afresh on me!” He also told them: “Anywhere those demons are hiding—command them out, in the name of Jesus!” Whatever sickness, disease, affliction—command it out of your system!”

Evangelist Chisom prayed: “That sickness in your organs, fluids, tendons—be healed, in the name of Jesus!” He also told congregants: “Whatever you may have eaten in the dream—command it to come out!” Further, he prayed for the people: “I command every dry bone in your body, business to rise again!”

Pastor Evelyn Joshua further asked congregants and viewers to confess their freedom over sin, sickness, affliction and infirmity: “I am free!”

On Sunday, May 22, 2022, Lilian was one of the recipients of prayer during The SCOAN Sunday Service. She had come with the problem of a hernia, which had been with her since childhood. She could not easily climb staircases or engage in serious physical exertions because of the problem. Moreover, she used to be troubled by a contrary spirit that gave her nightmares and the spirit of anger. Consequently, she had a hard time holding down relationships. During the prayers, Lilian felt the power of God and received her deliverance. Since then, the nightmares have vanished and Lilian no longer feels the discomfort she used to feel. “Never give up on God; He will deliver you at the point of your need,” she advised the church.

A Glorious Healing For Glorious!

For Glorious, four years of difficulty in walking ended during the service of Sunday, July 3, 2022, when he received prayer from Pastor Evelyn Joshua in the mighty name of Jesus Christ. Although he had felt some relief after taking drugs when the incident first happened, Glorious soon suffered a relapse. In the search for a solution, he moved from hospital to hospital but found no lasting solution. In the end, he was given a lumbar corset to aid his movement. Realising he needed God, Glorious came to church for payers during the service in question. According to him, a flash of lightning appeared to him as the woman of God laid an anointed hand on him. “I wouldn’t know if it meant something went out of me or something came into me,” said Glorious as he told of how he got his healing. “It is good to serve God, no matter your situation in life,” he advised viewers all over the world. He added, “God is here!” Glorious’ wife, Gladys, said: “After the healing, everything has changed. Now I have to run after him, to catch up with him.” Gladys also spoke about her own healing from knee pain, following prayer from the woman of God. No longer using a knee brace, she demonstrated the things she had not been able to do before, such as wearing high-heeled shoes and walking briskly. “With God, all things are possible,” she told the church.

On Sunday, July 3, 2022, it was deliverance for Mercy and her husband. It had all begun while Mercy was 10 years old, when a foul spirit crept into her. As she grew older, Mercy began to have nightmares in which she would find herself swimming in the mud. It also affected her studies, as she was hardly interested in schoolwork. As Mercy prepared to get married, she started to face obstacles. At some point, her father told her fiancé that he would not advise him to marry his ‘cursed’ daughter; in fact, Mercy’s father said he was not going to be a part of the process. Troubled by this, the man decided he was going to opt out of the wedding plans. Mercy then took her case to God, putting a picture of the man in-between the leaves of a SCOAN sermon booklet. Three days later, the man called and asked for the marriage process to be kick-started. Since her deliverance, Mercy has regained affection for her husband. “I am not a mistake in his life and he is not a mistake in my life,” she said about the effects of her deliverance. “God’s time is always the best; let’s keep trusting Him,” she advised the church. Mercy’s husband, Ovat, told of how relations with his wife had affected his finances. “My business initially started well but things took a bad turn,” he disclosed. Ovat said he kept losing contract upon contract even after getting approval for it. At some point, he said, he felt his wife was no more than a liability. “Continue to hold onto God, not men,” Ovat advised people.

For many years, Biola was under the influence of a contrary spirit that gave him nightmares and a stubborn cough. He also used to have sexual relations in the dream. He used numerous drugs but all to no avail. Submitting himself to the power of God, Biola made his way to church on Sunday, July 3, 2022. As an evangelist moved close to him, Biola began feeling uncomfortable, and when an anointed hand was laid upon him, he fell flat on the floor as the Spirit of God began to work on him. When Biola got home, God’s work continued in his body as he vomited poisonous substances from his system. Today, he is in perfect physical health. He is also free from the spirit that had been causing him nightmares, even as his business has started to prosper. “Make yourself available to God, he advised people.

For over three years, Dominion suffered a nasty problem of pain and deafness in the right ear. She had used all medications she could lay her hands on but without getting better. On July 3, 2022, however, Dominion received her healing following a touch from one of the evangelists. Upon receiving the touch, Dominion found the spirit in her manifesting before fleeing forever. After the encounter, she had a dream in which the woman of God assured her that the problem was over. Dominion advised people to hold onto God’s promises.

Rescued From Destructive Spirit Of Anger

Last week, Onyinye received her deliverance from a violent spirit. It had all started when she was 15 years old. She would get into fistfights and endless verbal quarrels. At one time, she broke her younger brother’s arm. At 17 years old, Onyinye got admitted to a higher institution, where she regularly got into fights with her roommates. She would find herself in dreams leading older people in fights. After some time, she sustained a leg injury that failed to heal and caused doctors to suggest amputation of the affected foot. Gravely bothered by this, Onyinye became sober. One day, while going through her phone, she stumbled on a prayer clip of Prophet TB Joshua. As she continued to pray along with God’s servant, Onyinye got her healing and the doctors confirmed there was no longer need for her foot to be amputated. Regarding her constant bouts of illness, Onyinye suggested to her mother that they visit The SCOAN for further prayers. To the glory of God, she received her deliverance from the spirit causing her to flare up in anger at every opportunity. “A life without Jesus is meaningless…bring Jesus into your life today and you will see a great difference,” she told the church as she ended her testimony. Onyinye’s sister and mother confirmed that the formerly aggressive Onyinye has now become a new creature. Onyinye’s mother advised parents not to be too hard or soft on their children, and to commit them into God’s hands.

The following are some of the testimonies sent in via email by people whose prayers were answered after calling The Emmanuel TV Prayer line:

After the service, Nkechi testified about her healing from deafness in the left ear after being prayed for at The Prayer Line. Following treatment for cancer 10 years ago in South Africa, the Nigerian’s left ear had got blocked. Glory be to Jesus, the Master Surgeon!