ONE YEAR AFTER: CELEBRATING THE LIFE AND LEGACY OF ‘THE MAN IN THE SYNAGOGUE’ - The Synagogue, Church Of All Nations - SCOAN - Prophet T.B. Joshua (General Overseer) Skip to content 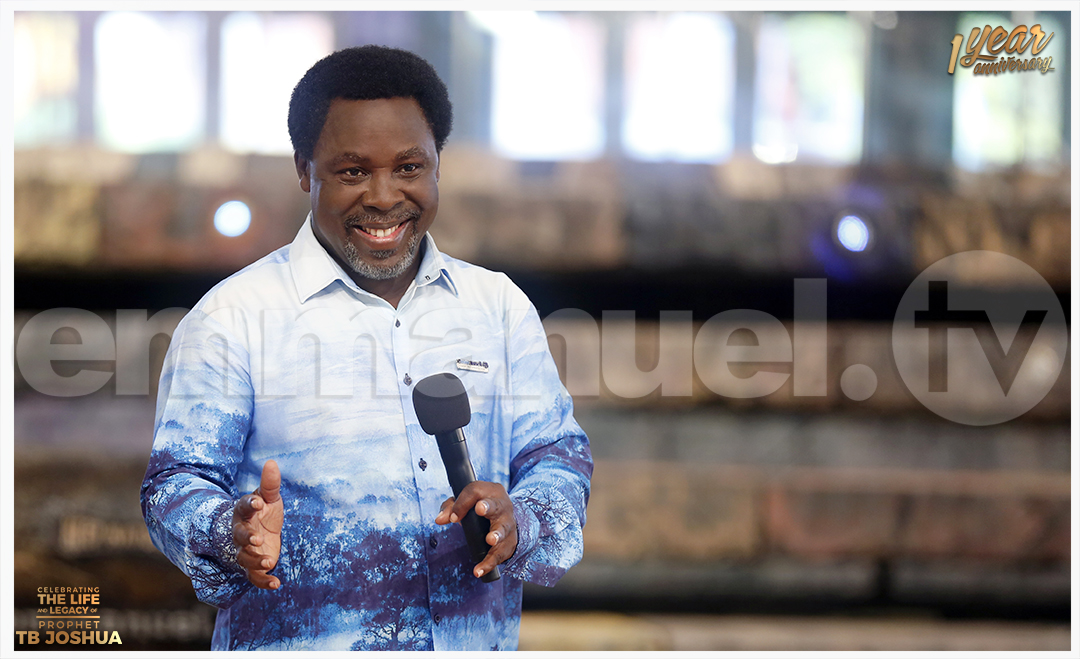 On Sunday, 5th June 2022, it was exactly a year since the transition of God’s servant Prophet T.B. Joshua (June 12, 1963-June 5, 2021) to eternal glory. The teachings of ‘The Man In The Synagogue’ have continued to bring hope and succour to millions of people living in a difficult world. To celebrate the life and legacy of this unique man of peace who was specially gifted as a unifier, people from all over the world assembled, in the first week of June 2022, at The Synagogue, Church Of All Nations (SCOAN) in Ikotun Egbe, Lagos. It was not a time to cry or rue the loss of their dearest departed prophet but a time to remind themselves on the need to carry on in the work of seeking to make the world a better place through personal spiritual development and acts of genuine charity.

Charity In A Lagos Slum

On 31st May 2022, activities were set in motion for The First Year Celebration Of The Life And Legacy Of Prophet T.B. Joshua with a charity event at a Lagos slum housing a sizeable population of the destitute, most of whom are differently abled. The people got a cash gift of 1.5 million naira and 500 bags of rice. Pastor Evelyn Joshua, who led The Emmanuel TV Team, said, “We will continue to visit you.” She then requested of the people of Alabarago, Ojo, Lagos, “Pray for our Partners all over the world.”

Charity For The Elderly

Three days later, on Friday, 3rd June 2022, Pastor Evelyn Joshua hosted elderly members of the church and announced a cash gift of two million naira to them. Each person also got an umbrella and two bags of rice. While asking for the continued support and prayers of the elderly, the woman of God said, “As long as the Lord liveth, we will continue to do this.” One of those who spoke on behalf of the elderly, Pa Nwokedi, said: “Prophet T.B. Joshua was a special man of God indeed. His legacy—we will never forget it.”

Later that Friday, Pastor Evelyn Joshua led visitors from across the world on a ‘Faith Walk’ around The SCOAN Prayer Mountain. At the end of the walk, Evangelist Chisom assured the people that they had indeed received from God.

Being the first anniversary of Prophet T.B. Joshua’s transition, Sunday, 5th June 2022 was a Special Sunday Service at The SCOAN. The celebratory service witnessed ministration by ministers from across the world, including Bishop Trevor Williamson from The Bahamas, Pastor Carlos Alvaro from Paraguay, Pastor Obispo Elvis from the Dominican Republic, Pastor Freyle from Colombia, Pastor Bernard Mulder from South Africa, Bishop Asif Jamali from Pakistan and Bishop Steve Ogedengbe from Nigeria.

On the entertainment side of things, ace Nigerian comedian Ali Baba was in charge alongside KC Brown, with the duo providing spontaneous but evangelistically themed humour during the service. Musically, there were performances by Esther of The SCOAN Sunday School, The Emmanuel TV Choir, renowned Nigerian flutist Tee Mac Omatshola, Salt of the Earth Band, South Korean opera singer Samuel Kim, the Ondo State Government House Choir, as well as American gospel singers Vashawn Mitchell and Shirley Murdock. There was also a dramatic presentation of Prophet T.B. Joshua’s teachings by the drama group I For Christ.

There were also representatives from the governments of Lagos, Ondo and Cross River states. While Rev. Bukola Adeleke stood in for the Lagos governor and Hon. Joseph Bassey represented his state’s House of Assembly, Deputy Governor Lucky Aiyedatiwa represented Ondo State, where Prophet T.B. Joshua hailed from. From outside the country there were representatives from Israel, Ghana and South Africa, among many others.

Speaking as wife to Prophet T.B. Joshua and as mother of his three children Serah, Promise and Heart, Pastor Evelyn Joshua went down memory lane as she recounted her earliest days with ‘The Man In The Synagogue.’ She told of the challenges she faced over being the wife of a man who had to attend virtually all the time to people from all over the world. She also told of his unshaken devotion to the heavenly race, especially his vow to God to let go of anything that could derail him, be it family, fame or fortune. She also spoke as the new leader of The SCOAN, promising to carry on the legacy while paying even closer attention to the needs of women and children. She summed it all up, “I shared many wonderful moments with Prophet T.B. Joshua…a prophet for generations.”

Towards the end of the service, congregants saw a video clip of The TB Joshua Foundation, which is aimed at preserving the memory and humanist legacy of Prophet T.B. Joshua. It comprises The TB Joshua Museum, The TB Joshua Scholarship Scheme and The Holy Land Experience.

On Monday, 6th June 2022, Pastor Evelyn Joshua led a unique, anointing-charged live service with visitors from all over the world. During her brief message, she read from John 9:1-7, 13-15 and told congregants: “Your case will become an argument among your people after your encounter with Jesus Christ through obedience. Prepare yourself for a touch that will make a difference in your life. The God of Prophet T.B. Joshua lives forever!”

Evangelist Joseph also gave a few words of exhortation to the people. He said, “When the Word influences your conduct and your character, you will talk, move, act, think according to God’s will, plan and purpose for your life.” He also assured them: “If you honour a prophet because he is a prophet, you shall receive a prophet’s reward. Today is your day to receive a prophet’s reward, in the name of Jesus!”

Thereafter, Pastor Evelyn Joshua and the evangelists proceeded to minister prayer to the people in the mighty name of Jesus Christ, laying hands on them and casting out all foul spirits. Indeed, the God of Prophet T.B. Joshua lives forever!