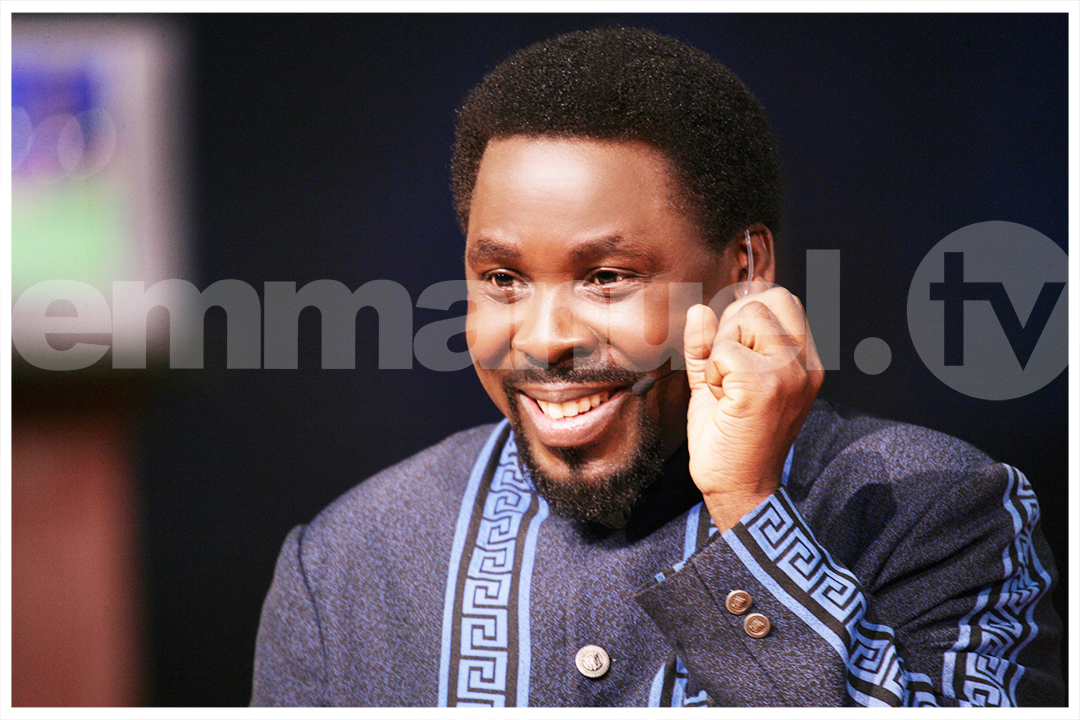 Sunday, 22 May 2022 was a date with destiny for the hundreds of congregants who worshipped physically at The SCOAN. But it was also a day of divine encounter for thousands all over the world as they linked up via Emmanuel TV. The service began with renditions by the choir of impactful worship songs that called down the Heavenly Host, causing many to vomit the impurities in their systems.

In a message that reminded congregants of Prophet T.B. Joshua’s highly inspired teachings, Evangelist James spoke on the need to “Make The Right Choice”. He took his proof text from Joshua 24:14-15 but also cited Deuteronomy 30:19, Galatians 6:7-8 and Daniel 3, among others. The message urged congregants to choose service to God in truth and Spirit, like Joshua did before encouraging fellow Israelites to do same. Choosing God, explained the evangelist, leads to living a life of contentment that could not be purchased with money, fame, influence or position.

Evangelist James reminded congregants that material possessions have never brought inner contentment to anyone. Therefore, he encouraged his listeners to ensure to live right in Jesus Christ, no matter the cost, so that they can enjoy the goodness of the earth in a way that God approves. Quoting the words of Prophet T.B. Joshua, the preacher said: “It is better to live poorly upon the fruits of God’s goodness than to live plentifully upon the products of our own sin.”

Evangelist James urged congregants and viewers all over the world to look beyond their past wrong choices and submit to the leading of God’s Word. In his concluding words he observed thus: “Unless the choices we make are rooted in God’s Word, they cannot stand at the time of great need. Deciding to put your trust in Jesus as your Lord and Saviour is the most important decision you can make in life. This is the right choice anyone can make in life.”

Prayer In The Name That Is Above All Names

At the Prayer Line Pastor Evelyn Joshua besought the Lord: “Father Lord God Almighty, look upon us with Your eye of mercy. Let Your living, giving power flow into the lives of Your children, purifying, restoring and cleansing them.”

Evangelists Chisom, James, Joseph and Ope then joined the woman of God in ministering prayer with the New Anointing Water. As the power of the Holy Spirit took over The Arena Of Liberty, hundreds of congregants witnessed a touch from Heaven and the contrary spirits in them fled forever. Indeed, no case was too stubborn to yield to the power of Jesus Christ.

When God’s Touch Fell Upon All

For the viewers she prayed, “Every hardship of your life—be removed, in the mighty name of Jesus Christ.”

She then ended: “I command today and all days to favour you, in the mighty name of Jesus!”

Evangelist Chisom prayed: “You demon, unclean spirit, familiar spirit, anywhere you are hiding—I say: Come out! Be loosed! Be disconnected!”

Evangelist Joseph told congregants to pray: “You root of bitterness, I command you: Out”

Evangelist Ope told congregants: “That sickness in your blood, kidney, liver, tendon… that sickness that has been programmed to kill you, to worry you—command it out!”

Evangelist James said: “Whatever name they call that sickness….continue to command it out!” He prayed: “Be healed of that sickness! Be healed of that disease! Let the power of God come upon your career, business, finances, destiny! I command the power of God upon your life! Be blessed as you go out, in the name of Jesus! Be blessed as you come in, in the name of Jesus!”

During the service, two visually impaired mothers made requests for financial support from Emmanuel TV Partners and The SCOAN Family all over the world. The first to speak was Bukola, whose baking business had all but collapsed owing to severe funding challenges. As a lone parent she had been unable to meet hers and her children’s needs, including their school fees.

The second request came from Justina, who had lost all of her investments as a fish farmer during the COVID-19 lockdown. Tired of the burden that she apparently was to him, Justina’s husband had walked out on her. Neither able to feed herself and children nor pay rent, she and the kids had been squatting with a friend under very tough conditions.

Irene, a Liberian, had been having problems with her back and always had to use different medications to suppress the pain. Early in 2020, she managed to make her way to the doctors, who diagnosed her with lumbar spondylosis. They told her there was little they could do for her besides giving her a lumbar corset and asking her to avoid certain movements of the body and certain activities. Not willing to be rendered virtually helpless, she decided to take her case to God and attended The SCOAN Living Water Service of Monday, March 16, 2020. After lying prayerfully on The Altar Of Prayer, Irene got up as a reinvigorated person, with all of her muscles restored to full health in the mighty name of Jesus Christ. Since that day, she has been doing all that the doctors had told her she would no longer be able to do. She can walk, turn and run for the glory of God. She advised people, “The only Person that will do it for you is God; you should have faith.”

Menses Restored As Stella Is Set Free From Spirit Husband

It was a testimony of deliverance for Stella during the service of May 15, 2022. That was the day she was set free from the spirit husband that had been causing serious problems in her life. The spirit had vanished after confessing its atrocities in the young woman’s life, such as the failure of her first marriage and all forms of setback. Stella had been a disturbingly aggressive person who always got into fights with her husband and neighbours. After the deliverance, Stella’s menstruation was also restored after ceasing for two months. Stella’s husband glorified God for the new life being enjoyed by his better half, but he also shared a testimony about his own healing. Prior to receiving prayer at The SCOAN, the boat driver had been unable to lift anything with one of his hands following an accident on the water. “Have faith in God,” he advised people. Stella herself advised people to trust in God.

Divine Healing For Comfort And Her Children

The obstinate spirit in Comfort, a Ghanaian based in the USA, had meant to take her life. On one occasion, she had suddenly fallen weak. As her husband made to get the ambulance, Comfort told him that she would minister the New Anointing Water on herself. The emergency passed, but some pain remained. As time went on, Comfort’s two children, who also live in America, came down with back problems, with the younger daughter requiring surgery. Comfort’s situation also kept deteriorating. One day she slumped in the bathroom and only the Spirit of God helped her to crawl out into the room. After this experience, she called up her sister, also based in the USA, and told her that she wanted to visit The SCOAN for prayers. Following the prayers on 15 May 2022, Comfort got her instant healing, after the evil spirit in her manifested. She said: “I slept like a baby and I began walking better. I am no longer feeling heavy.” Comfort’s breathing problems are also now over. “I can do everything now,” she insisted. Comfort’s daughters were also impacted by God’s power back in the USA. “There is nothing God cannot do, declared Comfort. “Distance is not a barrier,” she added. Comfort’s sister, Charlotte, corroborated the testimony and advised people to trust in God’s power. “Your situation does not matter,” Charlotte pointed out.

“I am going nowhere!” thundered the spirit in Samuel’s body during the one-on-one session with the evangelists on May 15, 2022. “Where do you want me to go?” he queried. The malevolent spirit had begun appearing to Samuel during childhood—in the dream, around 1 a.m. During examination periods, the family idol, which used to appear in the form of a snake, always brought failure to Samuel. Should anybody in the family refuse to serve the snake, such a person would suffer premature death. This was what happened to Samuel’s father, who was bitten by the snake in his sleep. Although Samuel moved out of the family home and relocated to Ghana, the spirit continued to torment the Nigerian wherever he went. Samuel knew he needed divine help, so he kept searching. Eventually, he found The SCOAN and made up his mind to come for prayers. Thereafter, he had a dream in which he saw The SCOAN in the sky. As part of the devil’s plan to prevent Samuel from visiting The SCOAN, his staff tried to cause some problems for his car sales business. However, Samuel refused to be distracted. Since his deliverance, Samuel can now eat as much as he wants, without fearing that he would fall asleep and see the family demon. “Now I sleep like a baby,” he told the church. He advised people to commit their issues to God, no matter what the issues are. “One day,” he said, “you will receive your own testimony like I have done.”

Below are highlights of the email testimonies that were read out during the service, as sent by people who received prayer over the phone:

Glory be to Jesus Christ—you too will receive your own testimony anytime from now!