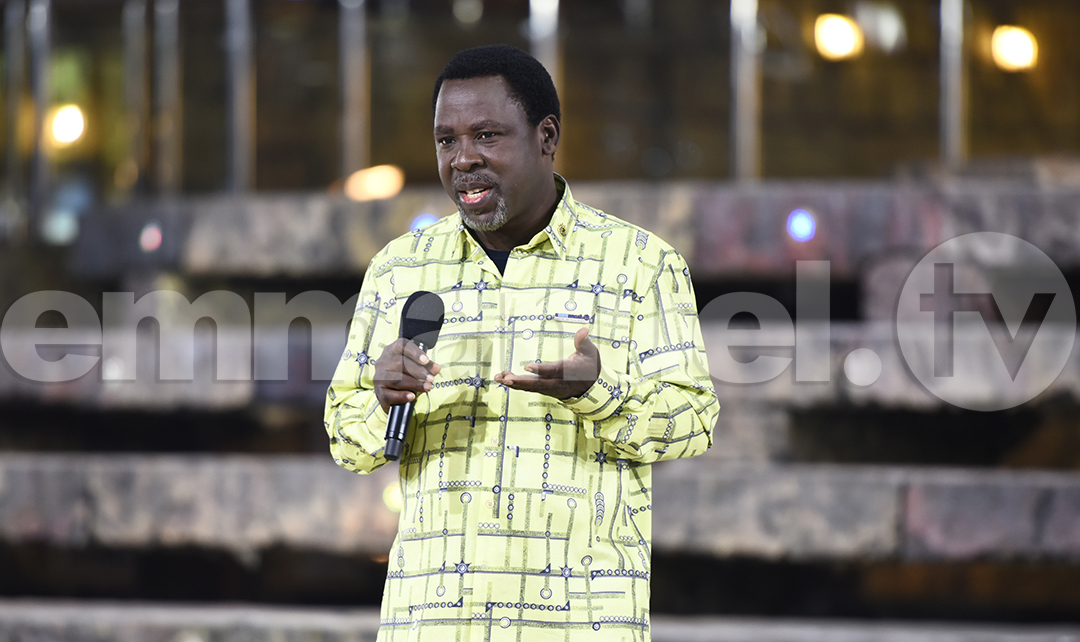 One of the most impactful songs composed by Prophet T.B. Joshua during his earthly sojourn talks about asking the Holy Spirit to subdue our fleshly desires and sharpen our spiritual sensibilities. It was in that light that The Emmanuel TV Choir sang thus at the start of the Sunday Service of May 15, 2022: “Holy Spirit/Take More Of Me/Give Me More Of You.” In no time, The SCOAN Auditorium was filled with the power of the Holy Spirit and congregants began expelling the impurities in their systems.

Upon stepping on The SCOAN Altar, Evangelist Joseph announced his message title as “Forgiveness Brings A Free Spirit”. From the Bible he read vintage texts on forgiveness such as Matthew 6:14-15, Ephesians 4:30-32 and Colossians 3:12-13. “As genuine followers of Christ,” he said, “we are obligated to forgive.” Not only does forgiveness give us a free spirit, he added, but it also helps us to earn God’s forgiveness and releases us for blessings.

Quoting God’s servant Prophet T.B. Joshua, Evangelist Joseph said: “Many of us have never felt the presence of God in our lives because of years of holding unforgiveness.” He added: “When you don’t hold grudges, you create perfect room for God’s Spirit in your heart. When the Spirit of God dwells in you, you will be recreated, refined for God’s special attention, for God’s special grace, God’s special blessings, healing and deliverance.”

The evangelist further spoke on the need to let God’s Word dwell in our hearts, since we all are in helpless need of divine mercy and forgiveness. He also stated that everything that is consistent with God will be endlessly fruitful. On that note, he resorted to another quote of Prophet T.B. Joshua’s as he cautioned congregants and viewers all over the world: “A person who does not forgive, who does not love cannot be entrusted with the power of God  to heal, to bless, to save and to deliver because he will use it against himself and his neighbour.”

God’s awesome, unfathomable, far-reaching and transforming power fell on hundreds of congregants during prayerful ministration of the New Anointing Water for healing, deliverance, blessing and salvation. All stubborn spirits were commanded to leave the people’s lives forever, for only Jesus Christ has the final say!

Evangelist Joseph told congregants: “Connect with Jesus by faith and receive your deliverance today.” He also told them to say: “You spirit stealing my joy, causing me setback, delay: Out! You demon, you familiar spirit—my body is not your temple: Out!”

Evangelist Ope told worshippers: “That power holding you down to where you do not belong—break it, in the name of Jesus!”

Evangelist James urged the people of God to say: “You sickness, disease—anywhere you are hiding in my body, blood bone, system—I command you out, in the name of Jesus!” He also prayed: “Every damaged organ in your body—be restored, be healed, be set free, in Jesus’ mighty name!”

Rounding off the service, Pastor Evelyn Joshua proclaimed: “Because you asked, you have received, in the mighty name of Jesus!”

Christy was all smiles as she testified about her healing from ceased menstruation, which she had first noticed in November 2021. After a series of tests, doctors declared that she was suffering from an infection. As a faith woman, she took her case to Jesus Christ and attended The SCOAN Sunday Service of April 3, 2022, where she received ministration of the New Anointing Water. During prayer, the contrary spirit in Christy manifested before fleeing forever. On getting home, Christy found that her menses had returned—to the glory of God! Since the healing, Christy no longer has the spirit of anger and the heaviness in her legs has vanished. She advised people to exercise faith, citing Psalm 40 on the need to wait patiently on the Lord.

On Sunday, April 17, 2022, little Emmanuella was on her mother’s lap to receive prayer over her swollen cheek. After trying several medical remedies, Oluchi, Emmanuella’s mother, had brought her to church for prayer. Upon receiving prayerful ministration of the New Anointing Water by Pastor Evelyn Joshua, Emmanuella began to feel better immediately. Shortly afterwards, she requested food even as the service was going on. Without feeling any pain, little Emmanuella ate up her meal happily! “We should believe and trust in God, with whom all things are possible,” Emmanuella’s mother advised the church.

It was a testimony of deliverance for Ugochi, who spoke about her freedom from the spirit of anger caused by powers from the marine world. According to her, the spirit had been running her life since she was 17 years old, when she went to visit her friend and got entertained with a bottle of soft drink, although she had declined a plate of coconut rice. Later that night, Ugochi had a dream in which she found herself swimming with marine spirits with whom she later had a violent encounter when they tried fighting her sister. Ugochi also spoke about dreams in which she would find herself frolicking with men, even though she disliked men in real life. She kept facing disappointments. When she eventually got married, Ugochi found it impossible to have a peaceful home, as she kept fighting her husband for no reason. During one pregnancy, she had a terrible dream in which a cat chased after her as well as her husband and the baby. Four days after having the baby, satan struck and the baby passed away. Meanwhile, the family’s business began crumbling and Ugochi’s husband lost all of his investments. Prompted by her husband, Ugochi finally agreed to attend The SCOAN Sunday Service of May 8, 2022. “Children of God, you cannot understand,” she said while speaking about the effects of her deliverance from the spirit of anger. She had apologised to a man who had pushed her on the road as she made her way home from church last Sunday. “Quite unlike me,” she said, “I apologised to the man instead of dragging him by his shirt and fighting him.”

Okechukwu, Ugochi’s husband, thanked God for saving him from the problems he began experiencing 11 years ago, after getting married. He also spoke about how he lost his two shops and how he had to make do with scouting for customers for other business owners. Okechukwu said he also took to drinking in order to forget his problems. Out of frustration, he had thought of quitting his marriage. He told his sister, “If anything happens to me, hold my wife responsible.” Before Ugochi came to church, however, her husband had earlier done so. During the service, he had received his own deliverance and healing. He said he had used to have dreams about snakes and had found it impossible to sleep at night. “I am a newborn baby now,” Okechukwu declared while proclaiming his healing from all bodily ailments. He also told of how his wife has now become warm towards him, with intimacy restored between them. “Do not hesitate to run straight to God, The Finisher, whenever you have a situation like mine,” he advised the church. Ugochi said, “When the time for your deliverance comes, no man will be able to prevent it.”

The following email testimonies were read out during the service of Sunday, May 15, 2022:

Rose, a Cameroonian living in Germany, vomited poisonous substances during prayer and received her healing from constipation.

Eunice from the USA was healed of noise in the ears after praying along with Pastor Evelyn Joshua on May 1, 2022.

A young Zambian woman and her mother were also impacted by God’s power while receiving prayer over the phone. Although she had called on behalf of her mother who was feeling weak and dizzy, it was actually the young woman herself who vomited, even as her mother also received her healing.

Lucky from Nigeria called The SCOAN Prayer Line over his wife’s pregnancy. She had been booked for an operation owing to cervix blockage and absence of water breakage. However, efficacious prayer in the name of Jesus Christ helped her to have her baby without surgery!

Glory be to Jesus Christ for all these testimonies. Wherever you are, all you need is to connect by faith through Emmanuel TV or The SCOAN Prayer Lines, for distance is no barrier to the move of God.