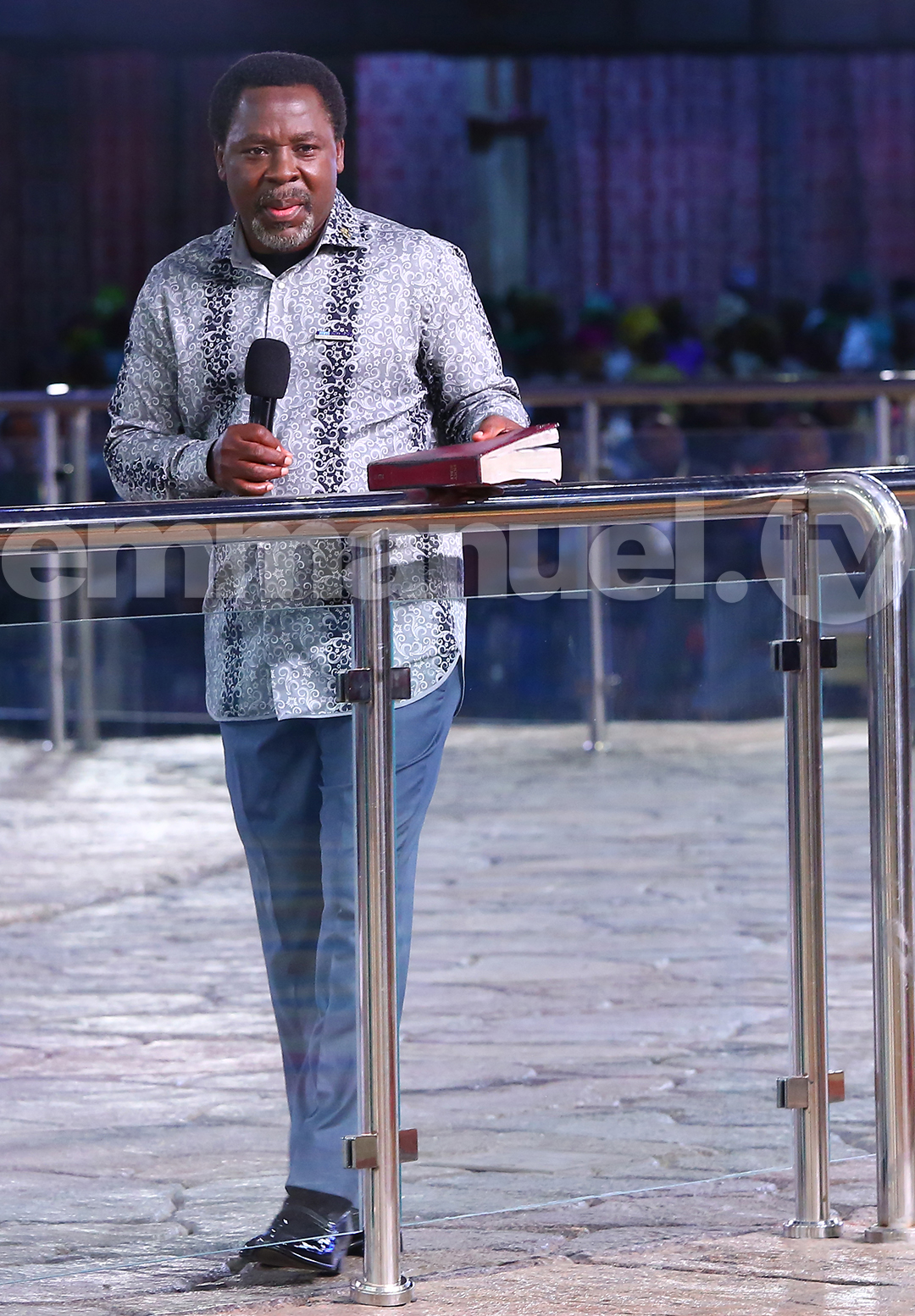 The SCOAN Sunday Service of May 1, 2022 started with a solo rendition by Esther of The Sunday School. Her vocal range during the operatic delivery of “Bless This House O Lord” was indeed a reason to glorify God for the talent He has bestowed on his children. After Esther’s performance, The Emmanuel TV Choir sang thus: “Locate Me Lord In Your Mercy/Don’t Leave Me Out When You Heal/Don’t Leave Me Out When You Deliver.” As the worship intensified, the Holy Spirit descended into The Arena Of Liberty for the manifestation of God’s unfailing power.

For his message entitled “Christ’s Proper Position”, Evangelist Chisom read from Matthew 6:24. He also cited other Bible verses such as John 14:27, Matthew 6:33-34 and Matthew 22:37. He said that it was necessary to make Jesus Christ the biggest and most important person in our lives. Doing so, he said, will give our lives meaning by ridding us of the emptiness represented by money, fame and other worldly things to which we get attached. Echoing Prophet T.B. Joshua he said: “Money is just a small slice of life. If you focus only on making money, a large slice of life will pass you by.” He then declared emphatically: “There is no true joy outside Christ Jesus.”

On that note, he encouraged the people of God to avoid the peace of the world, which is time-bound and comes with many unpleasant conditions. He then warned congregants: “Whatever blessing you seek, whatever possession you chase after, whatever fame and popularity you desire, if it is at the expense of your peace and joy, it is not worth seeking, chasing after, desiring.” Continuing the message, Evangelist Chisom cited the examples of David, Abraham and Sarah, Apostle Paul and Prophet T.B. Joshua as people who gave God the rightful place such that the breath of their spiritual and material success was extensive.

In conclusion, Evangelist Chisom urged congregants: “Give Christ Jesus His proper position in your life by taking God’s Word to heart and acting on it, and you will receive the grace of maintenance.”

Standing In The Gap For God’s People

At the Prayer Line, Pastor Evelyn Joshua prayed: “Father Lord, we thank You for today…. We thank You for the grace to understand that life is meaningless without You. Almighty God, we give you all the glory…. Lord God, we bless your name for changing us into Your own image. Thank You, Jesus!”

Then she began ministering healing and deliverance in the mighty name of Jesus Christ. She prayed for heavily pregnant women whose babies were improperly positioned, as well as people with difficulty in walking, hernias, open ulcers, fractures, multiple fibroids, bleeding, swollen belly, liver problems, piles, skin disease and mental disorder. Many of the prayer recipients fell under the power of the anointing, thrashing about and vomiting all the poisonous substances in their systems. They were all healed, delivered and blessed effectually!

Taking Command With The Word

“Get ready for victory! Get ready for blessing! Get ready to receive your healing!” said Pastor Evelyn Joshua as she geared up for the Mass Prayer session. First, she asked congregants to say a prayer of thanksgiving. Then, she asked them to plead the Blood of Jesus Christ over every ailing part of their bodies. “Be healed! Be freed! Be delivered!” she prayed.

Evangelist James said: “Every spirit of killing, stealing and destruction—continue to command them out of your life.” He also asked congregants to pray: “You spirit of killing, destruction – I command you, in the name of Jesus, to loose your grip over my family!” He then prayed: “Be released!”

Evangelist Joseph told congregants to pray: “Lord Jesus, by your divine mercy, heal me, Lord. Every spirit of sickness disease, pain – say:  Out! You sickness, disease—my body is not your temple—I command you in the name of Jesus: Out!”

Pastor Evelyn Joshua further prayed: “Every giant that stands between you and your progress: Out! I command every Red Sea in your life to be divided in the mighty name of Jesus Christ! Make a way for Your children where there is no way.”

On Sunday, April 24, 2022, it was the turn of the Durowaiyes from Abuja to receive from God. The woman of the house, Ronke, took the lead. She told of how a spirit husband had troubled her life for over forty years. The spirit had prevented her from showing affection to any man. In fact, after marriage, her husband once had to leave the home since he could not get any affection from her. The spirit also made Ronke the object of resentment. “Anywhere I went people would just hate me for no reason,” she told the church. She also used to fall ill frequently, troubled by blood pressure issues. Ronke’s husband, Friday, also narrated how he was delivered from the same spirit husband. As the New Anointing Water was ministered on him during the service, he became agitated as the spirit in him started manifesting. Thereafter, the spirit was cast out of Him in Jesus’ name.

However, Friday was still to receive more from God. Later in the week, he got impacted by God’s Spirit as he watched Pastor Evelyn Joshua ministering prayer with the New Anointing Water. That day, he vomited the poisonous substances in his system. It was God’s way of telling Friday that distance is no barrier to His Spirit. When Ronke returned home, Friday tuned again to Emmanuel TV and his wife also received from the Lord as she too vomited the poisonous substances in her system. Telling of how the spirit had troubled him, Friday recounted how he had used to run after women while abandoning his wife and children. But now he is a completely changed man. He advised people to run close to God. “God had been waiting for me somewhere,” he said. Ronke equally advised the church: “Hold on to God; don’t run away from Him, no matter what you are going through.”

Delivered From Spirit That Kills, Steals And Destroys

One moonlit evening, while in his village in eastern Nigeria, Godwin had been so agitated by the presence of a pesky swarm of bats that he picked up a stone and flung it at one of them, injuring it very badly. Shortly after, a strange figure began creeping towards him from the nearby bushes. Right from that day, things began to take a terrible turn in the little boy’s life. For instance, he lost concentration at school and his frustrated father decided he should quit formal education and go learn a trade. Even at that young age, Godwin had started to masturbate. And when it was about a year for him to complete his apprenticeship and get settled by his ‘master’, Godwin was unceremoniously sent home—with nothing to show for his over five years of apprenticeship. Later on, Godwin was engaged in commercial motorcycling from which he was able to raise money to rent a room. However, every night he would find a figure pressing him down. The home he rented was also converted to a den of lustful activities, as his friends kept bringing women there.

Afterwards, Godwin’s friends introduced him to a fetish woman who was supposed to give him special powers from contrary spirits. Not done with Godwin, the woman lured him into another ritual involving the slaughtering of a chicken. After that ritual, Godwin had a strange encounter with a vulture. To cut the long story short, Godwin started to face series of losses in all areas of his life, including his budding music career. On different occasions Godwin was unable to display his talent at music competitions, causing him to be dismissed as unserious. In a desperate bid for success, the ambitious Godwin joined an occult group online where he was given nine assignments, all of which he was required to record on video and upload on the Internet. However, things worsened instead of improving. As series of health issues came up, doctors told Godwin he was at risk of going blind. Meanwhile, the young man had along been trying to find divine solutions to his problems, including attending The SCOAN. However, whenever Godwin managed to find his way to The SCOAN, the spirit in him would cause him to quarrel with people around him, eventually causing him not to receive from God.

Before Godwin finally received from God last week, he had had a dream in which he encountered the spirit of Prophet T.B. Joshua. In that dream, his question was answered as to why real men of God often do not live long. After getting a satisfactory explanation, Godwin decided he had to be in church on April 24—the day of his deliverance. “You are free!” was the next thing Godwin heard after the Spirit of God knocked him down. Since then, Godwin has received a free spirit and now enjoys gospel music. He is also no longer slave to the spirit of anger, even as he now sees clearly with his formerly ailing left eye after ministration of the New Anointing Water. He advised people not to question God. “Seek Jesus over any problem you have,” he said. Godwin’s wife, Stella, thanked God for her husband’s deliverance. “I can see many changes in his life—he now sleeps well, is no longer easily provoked and his sight issues are gone,” she told the church. She advised people to confront their problems only with God’s power.

Read during the service of May 1, 2022, the following are some of the testimonies received in April 2022.

Angela, a Nigerian woman living in South Africa, was healed of bleeding after a dream in which she shared her problem with an image of Prophet T.B. Joshua. She had had the dream after watching a Mass Prayer clip on April 22. After receiving prayer via the phone, a 47-year-old woman from Zimbabwe was delivered from the spirit causing addiction to eating soil. Since that prayer in the second week of April, she has lost the desire for eating soil. A woman from Zambia also sent in a testimony about her healing from teeth problems causing mouth odour. A 33-year-old woman from South Africa wrote about her healing from stomach pain and bleeding. While receiving prayer via the phone, the woman had vomited the root cause of her issues. Now she is perfectly fine.