THE VALUE OF THE WORD - The Synagogue, Church Of All Nations - SCOAN - Prophet T.B. Joshua (General Overseer) Skip to content 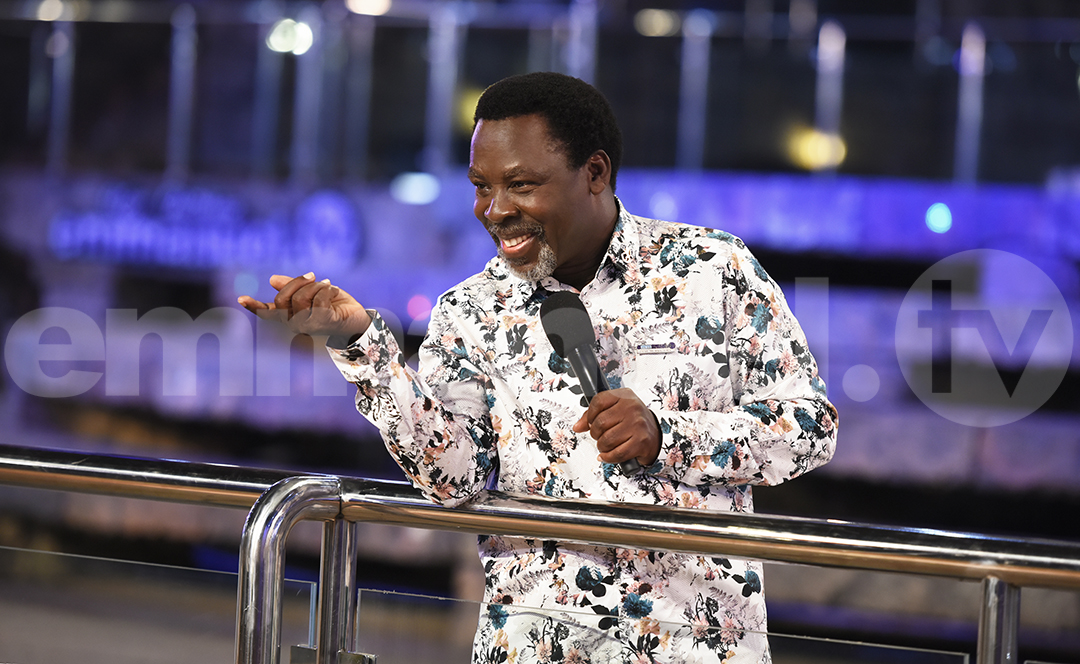 “You Have Done Wonderful Things/Mighty God,” sang The Emmanuel TV Choir during the worship session of the first Sunday service after Easter 2022. It was a service during which many kept their dates with destiny and got their release for breakthrough, after a resounding delivery of God’s Word by Evangelist Ope.

With those bits of Scripture, Evangelist Ope was able to show the many ways in which Christians can derive divine value from God’s Word, being the foundation of creation. In his words: “The only thing that is consistent, regular and stable is God’s Word. Anything rooted in God’s Word is permanent. The Word cannot change without God changing. The Word has not changed and cannot change. If the Word can be changed, then the Throne can be overruled; that cannot be because if you are talking about the Word, you are talking about the foundation of the Throne Of God!”

There is nothing God almighty cannot do,” said Pastor Evelyn Joshua as she joined congregants at The Prayer Line. She then asked the people to pray: “Please, God, look at me a sinner and forgive me my sins. Let your mercy speak for me, O Lord. Grant my request before you today, in the mighty name of Jesus.”

Before being joined by the evangelists, the woman of God ministered prayers of healing and deliverance to cases including prostate cancer, mental illness, difficulty in walking, leg ulcers, epilepsy and skin disease. While receiving from the Lord, some of the people vomited the root causes of problems in their systems. A man suffering from prostate issues urinated right after receiving prayer. Before, he had been unable to urinate easily.

“Fire all over your body!” commanded the evangelists as they prayed for the people with the New Anointing Water. Indeed, no case was too stubborn to obey God’s authority.

At the start of the Mass Prayer session, before she read from Matthew 18:18-20, Pastor Evelyn Joshua said to the church: “Believing is the only condition for answered prayers.” Thereafter she asked congregants to pray: “Lord Jesus Christ, open my heart to Your Word, open Your Word to my Spirit and give me understanding that I may know Your will in my situation…. Lord Jesus Christ, grant me the knowledge that I will continue to recognise who you are in the presence of trouble.”

Evangelist James prayed: “Every chain of disappointment, every cycle of limitation, failure, setback, poverty, stagnation—be broken! I command freedom over your business, career, in the name of Jesus!”

Evangelist Joseph prayed: “You demon, familiar spirit, spirit of bondage—I command you: Out!”

Pastor Evelyn Joshua also asked the church and viewers all over the world to pray: “Lord Jesus Christ, let your healing power flow into every part of my body. Lord Jesus Christ, may my case not escape your anointing today. Thank You for giving me a testimony today!”

In a Mass Prayer clip, Prophet T.B. Joshua told congregants to pray: “All spirits operating in your life— command them to come out right now!” He also prayed: “You devil, I command you to remove your hand from my people! Let there be deliverance! That damaged organ—begin to function, in the name of Jesus! Whatever sickness—I command healing on you, in the name of Jesus!”

“Begin to give thanks to God,” Pastor Evelyn Joshua told congregants after the Mass Prayer session. “Almighty God, lead us to our divine destination, in the name of Jesus Christ.”

The following are some of the testimonies shared during the service of 24 April 2022.

“If You Know This God, You Are Free!” Says Woman Healed Of Difficulty In Walking

Although a Ugandan by nationality, Margaret had actually flown into Nigeria all the way from Australia, her country of residence. While at work, she had tried to lift an object and sustained a spinal cord injury in the process. She was immediately rushed to the hospital for treatment and drug prescriptions. On returning home, Margaret found that the drugs actually made her tummy swell rather than bring her relief. The drugs also kept making her vomit awful slippery substances. As the pain persisted, the doctors gave Margaret a lumbar corset and other devices to help her walk with some ease. Still, however, there was no relief, so Margaret decided to bring her case before God. On 17 April 2022, Margaret received prayer from Pastor Evelyn Joshua and she started walking painlessly again. To the glory of God, her healing continued when she returned to her lodgings and vomited all the poisonous substances in her system. Since then, she has been walking without feeling any pain whatsoever, even as she now sleeps like a baby. In visible excitement, Margaret demonstrated all that she had been unable to do before. Praise be to Jesus Christ! By way of advice, she told the church: “If you know this God, you are free!”

Ivy Shines Again And Eats Sand No More As Giant Man Is Defeated!

For Ivy, a 27-year-old Zimbabwean woman, the first sign she got that God would intervene in her case was the relief she felt after praying about her menstrual cramps while on the premises of The SCOAN. She had travelled down to Nigeria for the service of 17 April 2022, and on that day God’s power freed her from the demonic spirit that had been running her life since childhood. The spirit used to manifest as a giant snake and had been responsible for series of problems in Ivy’s life, including preventing her from getting solutions to her problems. Sometime ago, Ivy had tried to make her way to The SCOAN but the evil spirit had scuttled the plan just as she was about to cross the border into South Africa. She lost all her documents in the process and had to get assistance to return home. In the meantime, Ivy had continued to connect with the Spirit of God by watching Emmanuel TV. During prayers on April 17, however, the contrary spirit in her confessed its atrocities before vanishing forever. As part of the deliverance, Ivy has now lost the urge to eat soil. Before now, the spirit in her could make her consume as much as one kilogram of soil. She later had a dream in which she crushed a tiny snake that appeared in her dream. Surely, that was a sign that the former giant had been reduced to nothing! Previously, giant snakes had been defeating her in the dream and causing her body heaviness. In fact, the nightmares used to be so frightening that Ivy would wake up screaming and running all over the house. To the glory of God, all of that is now in the past. While ending her testimony, Ivy advised people to wait for God’s time.

After hot oil poured on his body during a freak accident, Joshua was rushed to the hospital for treatment. Although the doctors did their best, Joshua’s burns were very slow in healing. The young man could do very little for himself and had to rely on his mother for most things. Most nights he would cry because of severe pain. However, the moment he started ministering the New Anointing Water on his burns, relief came and his journey of speedy recovery started, with his injuries drying up day by day—to the glory of God Almighty. Now he can walk freely and no longer feels any pain. Accompanied to church by his loving mother, Joshua advised people to take their relationship with God seriously. “Doctors can only treat; God is the Master Healer,” he told the church.

For Oluebube, 17 April 2022 was the day of her freedom from the spirit husband that had been dominating her life. The malevolent spirit had kept causing her a stillbirth every time she fell pregnant with a male child. Oluebube was also constantly angry and irritated by the people around her, especially her husband, whom she always shouted down. She also had serious health issues that constantly left her tired. As God’s power in the New Anointing Water fell upon Oluebube, the spirit in her reacted strongly and made confessions. Thereafter, it was all calmness. Since then, Oluebube’s life has changed for the better. She no longer has dreams in which she gets defeated by the spirit husband; instead, whenever negative forces dare to show up in her dreams, Oluebube trashes them mercilessly by the authority in the name of Jesus Christ. She has also become a loving wife to her husband, who expressed his amazement at the transformation while advising people to take their problems to God. Oluebube herself advised people to trust and obey God.

The Chenjelanis Are Located By The God Of Abundance!

The Chenjelanis, who are Zambians living in Angola, testified about the breakthrough they received after tapping into a prophetic utterance by God’s servant Prophet T.B. Joshua during a service they watched on Emmanuel TV in April 2017. As at that time, the family was in possession of the New Anointing Sticker and on the back of it, the man of the house, Chipo, had written the date of the service as well as his promises to God if He blessed the family with breakthrough. Although Chipo had then been stuck in the position of Executive Officer for 11 years in his country’s civil service and could barely make ends meet, he soon got elevated to the status of Senior Executive Officer, a position that qualified him to represent his country’s foreign service. Since then, the family’s standard of living has risen to unprecedented levels, such that they are now able to meet the needs of family and friends in addition to theirs. Now owners of a business, they are also blessed with much better cars and their own houses. Irene, Chipo’s wife, told of how her family is now in a position to help others instead of being seekers of basic help themselves. “Have faith in God; everything is possible with Him,” she told the church. For Chipo the advice was: “God does not forget—tap in by faith.”

For the email testimonies, congregants and viewers all over the world listened to the reports of people who had called The Emmanuel TV Prayer Lines at different points in the last few weeks. There was the case of Maryam from Zambia, who was healed of a serious cough that had lasted over a month. There was Fikile from South Africa who became free after manifesting and vomiting the impurities in her system.

There was a man from Zambia who was healed from pain in the testicles caused by a spirit wife. Now he can walk, sit and stand without feeling any pain. “Don’t give up,” he wrote. There was also Ngozi from Cote d’Ivoire who was healed of insomnia. She had felt vibrations all over her body and vomited during prayer. “I am now confident in facing the future,” she wrote confidently.