OBEDIENCE – THE ESSENCE OF SALVATION - The Synagogue, Church Of All Nations - SCOAN - Prophet T.B. Joshua (General Overseer) Skip to content 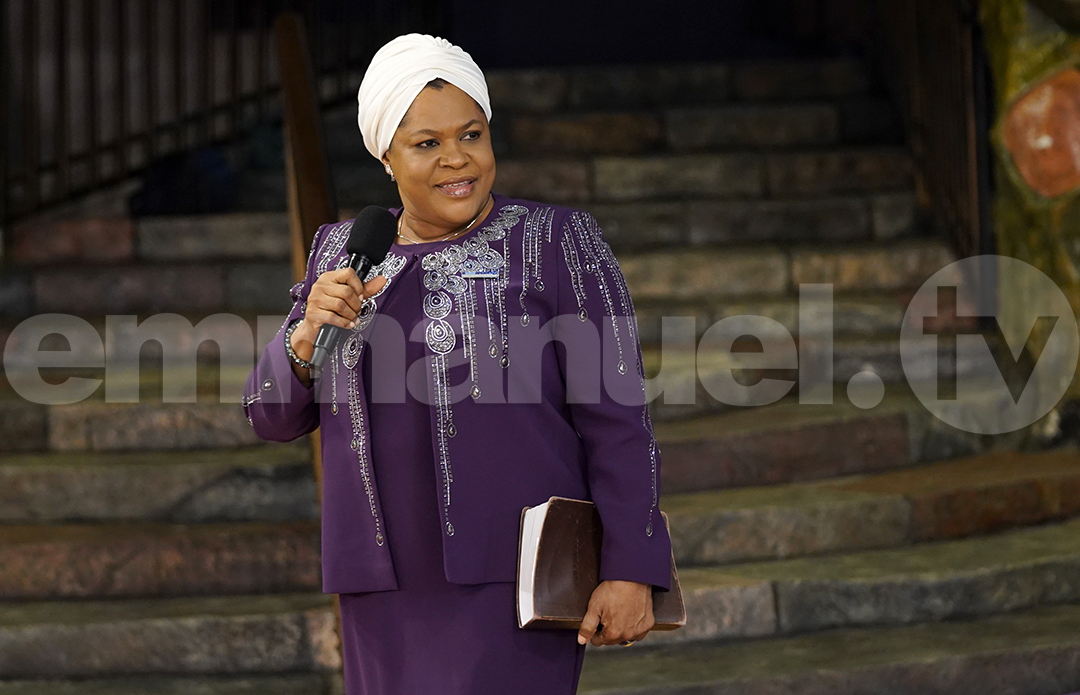 On Palm Sunday 2022, which fell on April 10, the mighty move of God was again witnessed at The SCOAN by people from all over the world who had come in search of a personal encounter with Jesus Christ, our Lord and Saviour, the Master Healer, the Alpha and Omega who works wonders in the lives of the believing. Attired in wine-themed gear, members of The Emmanuel TV Choir sang out their hearts to Heaven and the Holy Spirit descended into the auditorium, affecting the songs with the anointing that breaks yokes and brings healing. They sang: “Give Thanks/With A Grateful Heart/Give Thanks To The Holy One/Give Thanks/Because He’s Given Jesus Christ His Son.”

For the sermon, Evangelist James drew from Romans 6:16 as he ministered on “Obedience – The Essence Of Salvation.” “It is impossible,” he began, “to live without challenges.” But he quickly pointed out that the way out from challenges is obedience to God, which is not to be mistaken as equating to “costly sacrifices, praying and fasting or waving our hands in worship.” In words echoing God’s servant Prophet T.B. Joshua, Evangelist James said: “It would not have cost man anything to obey God’s command but it cost him everything to disobey God.”

The preacher then noted that Jesus’ obedience to The Father enabled the redemption of humankind. In his words, “Christ Jesus came to remove this disobedience – its curse, its dominion and all it has wrought in the life of man in terms of sickness, setback, poverty, failure.” Other scriptural references for the message were Hebrews 5:8-9, Genesis 22:12-18, Luke 18:18-25, Deuteronomy 11: 26-28 and John 14:21.

Carrying on with the message, Evangelist James described spiritual growth as a one of the biggest blessings that can be derived from obeying God’s will, the biggest being inheriting the Kingdom of God. According to him, “The way to be a blessing to the world is to be men and women of obedience.” He then ended by asking the church to pray thus: “Lord Jesus, teach me the lost art of obeying God as you did. Give me a heart that does not bear grudges, a heart that is pure, humble and sincere. Help me, Lord, to walk in the path of Your commandments, in Jesus’ name.”

Anchored by Pastor Evelyn Joshua, the Prayer Line and Anointing Water Ministration session was another chance for an awesome encounter with God Almighty, with healing and deliverance made freely available to the people. The woman of God gave a few words of exhortation to the people after reading from Matthew 21:1-3. Her short message focused on the steadfastness of a man of vision, who is never overwhelmed by present successes or challenges.

Subsequently, evangelists James, Joseph, Chisom and Ope joined in the ministration of prayers of healing and deliverance for the salvation of the people’s souls. As the ‘Balm of Gilead’ touched their bodies, the people fell under the anointing and the contrary spirits in them reacted noisily before vanishing forever. Praise the Lord!

In the one-on-one sessions, the evangelists command divine fire to finish off every stubborn spirit. As the Bible says in Isaiah 40:4, every mountain and hill shall be “made low; the rough ground shall become level, the rugged places a plain.” Thank You, Jesus!

Starting the Mass Prayer session, Pastor Evelyn Joshua prayed: “Give us the grace to resist every temptation, everything that will hinder us from coming to you.” She then told congregants to pray: “The blade of the sword of the Spirit is in my hand and it is sharper now than ever before. Thou spirit of deliverance – fall afresh on me! Thou power of deliverance, healing – rain on me, in the mighty name of Jesus Christ!”

Evangelist Ope said: “That spirit disconnecting you from the blessings of God – break it, in the name of Jesus!”

Evangelist James prayed: “You demon, unclean spirit, the cause of setback, limitation, crisis – I command you out! You disease – unnoticed you came, unnoticed you shall leave!”

Evangelist Chisom prayed: “Be healed of that sickness, affliction, in the name of Jesus Christ! You disease, infirmity – listen to the voice of God. I command you: Out!”

In a Mass Prayer clip, Prophet T.B. Joshua prayed: “Every infirmity, wherever it is located, right now I command that infirmity in your blood, tendons, bones…begin to command them out…. Anywhere sickness disease is located in your life, blood, tendons, kidneys, liver, fluids, bones, on your skin – I command them out, in the name of Jesus! Let the power of God come on you! …. History about your business, life, finances, marriage, family – begin to change!”

An End To Tears As 70-Year-Old Woman Walks Freely Again!

Before she came to The SCOAN for prayers on Sunday, March 27, 2022, 70-year-old Virginia had been suffering from severe difficulty in walking due to rheumatoid arthritis. She was virtually grounded. Because she had always been an active person who liked to move around, the situation was really frustrating for the ailing woman. At night she would wail in pain every now and then, causing her children so much unhappiness. They had gone to fetch her from the village in order to get her medical attention, which did little to ease her pain, however. During the service in question, Virginia had received prayerful ministration of the New Anointing Water, leading to instant relief. Since then she has regained full use of her legs and now sleeps peacefully because she no longer feels pain. Testifying alongside their mother, Virginia’s children advised people to exercise faith for their own miracles. Virginia advised all to trust in God.

Goodmorning Is Now Free From Convulsions!

During the service of Palm Sunday 2022, Patience testified about her son who is named Goodmorning as a testimony to God’s awesomeness in his parents’ lives. Since he was two years old, Goodmorning had been suffering from life-threatening convulsions. On numerous occasions had Patience been asked to rush down to her son’s school during a convulsive crisis.  On the last occasion, by the time Patience got to the school, Goodmorning had become lifeless. In faith, however, she had immediately called one of The SCOAN Prayer Lines. She was asked to place her hand on her child’s body. She did so and, to the glory of God, Goodmorning was restored to life. On his way to restoration, the little boy had let out air from his stomach and had also vomited. Since then, he has been free convulsions. Glory be to God! “We should all believe in God; at the right time there will be a solution to your problem,” Patience advised the church.

Freed From The Reproach Of Nine Years Of Barrenness!

For close to a decade, the Godwins had no child. As would be expected, they experienced unsparing mockery from friends and neighbours. In their bid to find a solution, they went to numerous places but drew a blank everywhere they went. During the search for a baby, the woman of the house was once left stranded hundreds of kilometres from her home. She had travelled all the way from Bayelsa State in Nigeria’s south-south to a state in the south-west, where she had gone to receive treatment from a female herbal healer. The woman had refused to accommodate her because the child-seeking woman had come at an unscheduled time. Moreover, on one occasion she was arrested by the police for engaging in a fight with a young man who had mocked her over her childlessness.

However, God intervened when the couple besought Him at The SCOAN. After receiving the New Anointing Water, the couple began ministering it and, within a couple of weeks, the long-awaited pregnancy showed up. Doubting the good news from her doctor, the woman went to no fewer than four other hospitals to confirm her pregnancy. Along the line, as the pregnancy grew, she fell ill and received an injection that almost cost the life of her baby. Assured, however, that she had indeed received a blessing from God, the woman again called upon the Almighty for help by ministering the New Anointing Water on herself. That very day, her baby began to kick again! Eventually, baby Deborah was born! The miracle was so surprising that neighbours openly expressed their doubt as to the owner of the baby, forcing the Godwins to report to the police. Accompanied to church on Palm Sunday by her husband, the woman advised people seeking the fruit of the womb to believe in God’s power. “Don’t doubt the miracle of God!” she urged the people.

From all over the world people also sent in their testimonies via email. Among these were emails from people who received healing and deliverance over issues including stagnation, depression leading to suicidal thoughts, ceased menstruation, loss of teeth, nightmares and bleeding. These people had received without being physically present at The SCOAN. In like manner. Wherever you are, you too can connect with the highly anointed ministry of Prophet T.B. Joshua for prayer. Emmanuel!

Healed Of Difficulty In Walking Due To Spinal Cord Injury

After suffering a spinal cord accident nine years ago, Mary continued to feel severe pain all over her back even after receiving intensive medical treatment. She had to rely on a lumbar corset and a cocktail of drugs to get relative comfort. On Palm Sunday, however, she received her perfect healing at the Prayer Line as Pastor Evelyn Joshua ministered prayer with the New Anointing Water. Flanked by her husband and son, the Ghanaian advised people to wait for God’s time. “The Lord has done it,” her husband said. Her son, Emmanuel, also thanked God for healing him from asthma.