THE UNCONDITIONAL LOVE OF GOD - The Synagogue, Church Of All Nations - SCOAN - Prophet T.B. Joshua (General Overseer) Skip to content 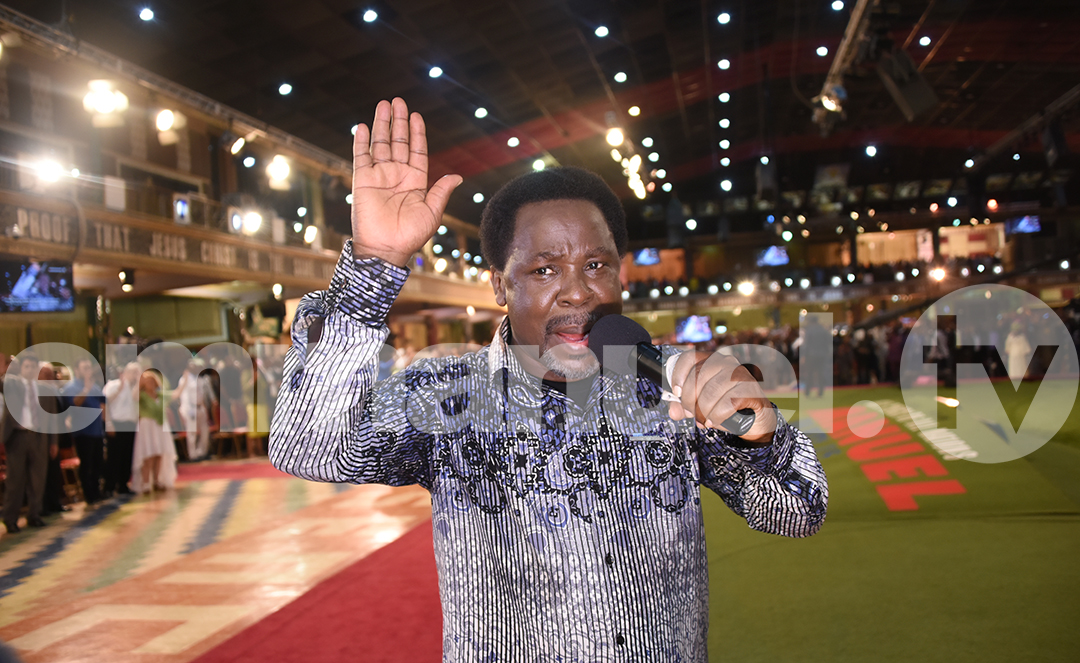 Sunday, 3rd April 2022 was another glorious time in God’s presence for worshippers at The SCOAN, a mightily anointed place of refuge for the world. From the moment the service was prayerfully declared open and the choir began the worship session to when Pastor Evelyn Joshua closed the service with The Grace, everyone was impacted at one time or the other by God’s Spirit, which suffused the auditorium and produced signs and wonders. The sick were healed, those in bondage were delivered and those suffering stagnation were released for breakthrough. More importantly, all of God’s blessings were for the salvation of souls—ultimately!

On joining congregants, Evangelist Joseph echoed God’s servant Prophet T.B. Joshua when he announced his topic as “The Unconditional Love of God”, taking his proof text from 1 John 4:9-10. “Human love is nothing but a shadow of God’s love,” he said while asking congregants to note that “a man may claim to love outwardly but not such in heart.” It was a message for which the preacher quoted the Scriptures copiously, among which were John 10: 17-18 &27-29, 2 Corinthians 13:13, John 4:14 and Matthew 11:28-30.

In essence, the message dwelt on the constancy of God’s love despite humankind’s imperfection. The clearest indication of God’s love, Evangelist Joseph said, was Jesus’ crucifixion, by which all of our burden, however heavy, is cleared away. Speaking about Jesus Christ, the preacher said: “He is the Friend of the rejected, a Friend closer than a brother. No matter what you are passing through, always remember God’s love for you, because through His love, we love by His love, we are made a new man and in His love, we have newness of life.” He then concluded: “The faithful and unconditional love of God has no ending, for it is new every morning.”

“Father, forgive us in the mighty name of Jesus Christ!” prayed Pastor Evelyn Joshua as she presented herself before the throne of grace during the Prayer Line ministration. From all over the world people had come with various issues, such as difficulty in walking, skin disease, hernias, bleeding, pregnancy complications, asthma, ulcers, piles and swollen body, etc.

As the woman of God prayed and ministered the New Anointing Water in the mighty name of Jesus Christ, healing and deliverance for breakthrough began to manifest in an instant. Many vomited the poisonous substances in their systems after the contrary spirits in them reacted before fleeing at the mention of the name that is above every other name.

The same unshakeable power of God continued to manifest as evangelists Joseph, Chisom, James and Ope joined the woman of God in ministering healing and deliverance for liberation into a new lease of life in Jesus Christ.

During the Mass Prayer session, Pastor Evelyn Joshua besought the Lord again: “Father Lord, by your Holy Spirit, enable us to remain whole, in the mighty name of Jesus!” Afterwards, she prayed alongside the evangelists for the ease of congregants and worshippers all over the world.

The woman of God fired the first salvo into the camp of the enemy by declaring: “Every garment of heaviness in your body, spirit, soul—we command it out right now, in the mighty name of Jesus!”

Evangelist James told congregants: “Every spirit that steals, kills and destroys—continue to command it out of your life.” He then declared: “By the authority in the name of Jesus, I command you to be loosed!”

Evangelist Chisom told congregants to stand in the believer’s authority and say: “You demon, unclean spirit, familiar spirit—anywhere you are hiding, I command you out! You demon—anywhere you are hiding tormenting my life, family—out!” He also prayed: “Every part of your body that is not functioning—begin to function!”

Asking congregants to “Contact the Holy Spirit for your freedom today”, Evangelist James prayed: “Every spirit that is attacking your health—go, give way!”

For Evangelist Ope, the instruction was simple yet incredibly powerful: “Every mountain blocking your route—command it to move right now!”

And before a prayer clip of Prophet T.B. Joshua came on, Pastor Evelyn Joshua urged the people: “Continue to reject the spirit of addiction, every spirit that causes you shame…and begin to set yourself free!”

The man of God then proclaimed: “Demons, infirmity in the lives of my people—I command and order them out from your life!”

After praying for heavily pregnant Success on Sunday, March 6, 2022, Pastor Evelyn Joshua had told her: “Go and deliver like one of the Hebrew women.” Success had been having issues with her pregnancy: She could barely eat and her baby was in a breech position. When doctors suggested surgery, Success’ husband urged her to stand in the believer’s authority and take her case to God. To the glory of God, the baby adjusted to the normal position right there in church as the woman of God prayed for Success in the mighty name of Jesus Christ. “I began to eat normally,” recalled Success. “And my temperature also dropped,” she added. Days later, even though she was past her due date, Success had baby Dominion right at home, without any surgery or pain! “There is nothing God cannot do,” Success told the church.

Five years ago, after having a baby out of wedlock, Onyinyechi, then a 300L student, had fallen into depression following her rejection and condemnation by society. On three occasions, she had tried to take her own life but was always fortunate to be stopped by her mother, who kept walking in on her. On a fourth occasion, however, Onyinyechi had thrown herself down from the balcony of their one-storey building. Luckily, she had managed to survive after being taken to the hospital. Thereafter, her mother introduced her to Emmanuel TV. Eventually, the young mother made her way to church and the power of God ejected the spirit of depression and suicide that had been running her life in the past five years. Onyinyechi said that she had felt hot once the New Anointing Water landed on her body. Subsequently, the contrary spirit had confessed its atrocities before fleeing forever. Since then, Onyinyechi has regained her zest for life and she is now prayerful and sleeps easily. Peace, her mother, glorified God for the intervention, saying: “She’s friendly, she sings, she prays.” Peace advised the church: “God is too faithful to be unfaithful! Don’t conclude on your case until God has concluded it.” Onyinyechi advised young people not to feel dejected or rejected when faced with a situation like hers.

Shortly after she had a baby via a Caesarian Section, Callista was diagnosed with appendicitis. The condition made it really hard for her to care for her baby and do her domestic chores. One day, in faith, Callista called The SCOAN Prayer Line as she watched Emmanuel TV. The morning after the prayer, she told her husband that she had started to feel better. Rather skeptical, and suspecting that she was only trying to avoid surgery, Callista’s husband had insisted that she be examined at another hospital. To the glory of God, the new scans and tests confirmed that Callista had indeed been healed of appendicitis! Since then, she can now do her household chores and go to work without feeling any pain. She advised the church: “Distance is not a barrier. God is still performing signs and wonders here.” Her husband advised the church: “Prayer is the key; God answers all prayer.” Interestingly, last Sunday was Callista’s first ever time at The SCOAN!

Since childhood, pretty Keguna had suffered from the affliction of a marine spirit, which brought untold hardship to her life. During her testimony on April 3, 2021, Keguna had gone back in time as she shared with the church how she had been told she used to cry endlessly as a baby. It was right from the tender age of four that she had realised she used to have terrible nightmares. To solve the problem, Keguna’s mother had taken her to a river that had two parts: one part white, one part black. At the river, a priestess performed a ritual in which she sacrificed a chicken to the spirits in the water, who came to shore in the form of beautiful fish. Instead of drowning, however, the chicken escorted the fish into the dark part of the river. Although the ritual stopped Keguna’s constant crying, it actually brought other problems. For instance, she began to have even more frightening nightmares. Moreover, a handsome tall man started to trail the little girl as she went to school. Keguna’s mother asked her to shout off the man. In retaliation, the spirit started appearing to Keguna at night. Prayerfully, however, she would cast away the spirit. Yet, the spirit continued tormenting her, especially by causing her illness as she grew older and started higher education.

In the area of relationships, Keguna had a miserable time as men kept rejecting her whenever it was time to commit to marriage. Before she managed to find her husband, Keguna had been opposed by the devil, who had tried to prevent her from attending the wedding where she eventually met him. Having been persuaded by her father-in-law to follow Emmanuel TV, Keguna did so one day and she experienced the raw power of God. On the day in question, she had been flung away twice as she touched the screen of her television while praying along on Emmanuel TV. Along the line, Keguna’s husband also joined in the prayers. Two weeks after the prayers, things improved dramatically for the family and their business began to do well. However, the devil tried to strike again by bringing up the same problems. It was in that state that Keguna received her deliverance during the service of March 27, 2022. Since then, peace has been restored to her heart and she now sleeps blissfully. Her husband, who accompanied her alongside their children, advised people to wait on the Lord. Keguna herself advised parents to be mindful of where they take their children for prayers and to listen to the voice of God rather than of men.

From all over the world, people had sent in testimonies of their miracles after receiving prayer via The SCOAN Prayer Lines. Among the cases were prostate enlargement, ceased menstruation, evil spirit affliction, child stubbornness, pain in the lower back, chronic headache, general body pain, itching in the anus and leaking of faeces, bleeding leading to anaemia, spirit of rejection and anger, and business stagnation. Those testimonies were indeed proof that God never stops giving us reason to praise Him!

After the service, Michael from Anambra State testified about his healing from difficulty in walking. For 12 years, he had suffered the impact of diabetes and high blood pressure—diseases which forced him to rely on a cocktail of drugs. Following his healing, he discarded his lumbar corset and danced for the glory of God. He advised people to seek the face of God.

Owing to lumbar spondylosis, this woman was unable to do the simplest of household chores. Her body was constantly battered by pain. All of her pain ended last Sunday after she received prayer from Pastor Evelyn Joshua at The Prayer Line. She demonstrated all that she had been unable to do before, including squatting, bending and jumping. After discarding her lumbar corset in the presence of her husband and son, she advised people to run to God.

Ana from Mozambique testified about her healing from general body pain, especially in her leg. During the worship session, she was able to move and dance freely in demonstration of her perfect healing. She also advised people to take their problems to God.