LIVE ABOVE YOUR FEARS - The Synagogue, Church Of All Nations - SCOAN - Prophet T.B. Joshua (General Overseer) Skip to content 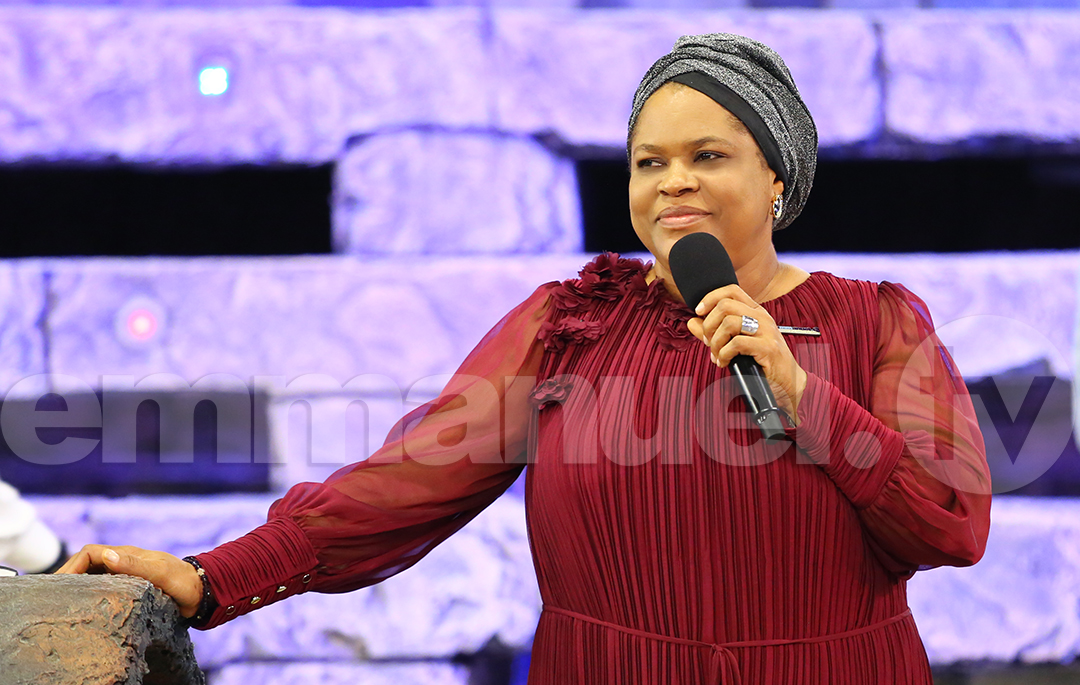 As usual, The SCOAN Sunday Service began with melodious supplication to God Almighty, which was led by The Emmanuel TV Choir. The choir began with one of Prophet T.B. Joshua’s special compositions, “Spirit Pray Through Me”. The lyrics read: “I’ll Bring My Sin/Before The Blood Of The Lamb/So That You Can Pray Through Me.” Soon, God’s Spirit permeated the atmosphere and people started vomiting the poisonous substances in their systems.

It was amidst that divine saturation of The SCOAN Auditorium that Evangelist Chisom climbed on The Altar to minister on the topic “Live Above Your Fears”. He took his proof text from Romans 8:31—What, then, shall we say in response to these things? If God is for us, who can be against us?” The message can be summed up as follows: Every person is unique in this world and has the capacity to reach the greatest of heights in all they do, if only they work hard while keeping their focus on Jesus Christ (John 16:33) through faith in God’s Word regardless of whatever obstacles may confront them (Hebrews 12:7-11, Psalm 23:5).

To back up this point, Evangelist Chisom cited several bits of scripture highlighting the faith actions of certain biblical characters, such as Joseph (Genesis 37: 1-11), Daniel (Daniel 6), David (1 Samuel 17), Shadrach, Meshach and Abednego (Daniel 3), Apostle Paul (2 Timothy 4:7) and Job (Job 2:7-10). Among other bits of exhortation, Evangelist Chisom urged congregants to not fear rejection by men, to exercise discipline and resilience in going after their goals in life, to pray for the opening of their eyes of faith and to avoid taking advice from good-intentioned people, who always speak from a human perspective. “Pay any price to protect your purpose in life,” he concluded.

A Time For Yoke Breaking!

“We decree freedom into your life today!” pronounced Pastor Evelyn Joshua when she joined those who had come with various issues at The Prayer Line. No case was too big for God’s power, be it difficulty in walking, piles, ulcer or mental disorder. As each person received heavenly fire, the problems in their bodies and lives vanished in the mighty name of Jesus Christ.

God’s presence continued to be felt as evangelists Ope, Joseph, Chisom and James joined the woman of God in ministering the New Anointing Water, with scores of congregants receiving their freedom from every contrary spirit.

During the service, the woman of God visited The SCOAN Sunday School to introduce new teaching materials for the children’s use.

The Anointing Did Not Pass Them By

As congregants and viewers all over the world got ready for a touch of glory, Pastor Evelyn Joshua asked them to say to God: “I want to see You in my life!” She also asked them to pray: “Lord Jesus Christ, grant me a heart that does not bear grudges. Give me a winning heart, a pure heart, a sincere heart.” Afterwards she declared: “Be delivered! Be freed! Be blessed as you come in, as you go out. Be blessed in your family!”

Evangelist James declared upon the church: “Be healed!”

Evangelist Chisom charged congregants: “Right now, begin to open every closed door to breakthrough in your career, family, business, in the name of Jesus Christ!”

Healed After Vomiting During Mass Prayer

Among the many who vomited during the Mass Prayer session were Ernest, Paul and Olubukola, who were healed of chest pain, staphylococcus infection and eye issues. Glory be to Jesus Christ!

On January 1, 2022, while most people were excitedly celebrating New Year’s Day, the story was rather different for Grace and her family. On that day, Grace had sustained a nasty injury that kept her bedridden, unable to do anything for herself. Although her family made efforts to get her relief through medical means, the situation did not get better despite drugs and other medical aids. A fortnight ago, however, Grace presented herself for prayers as Pastor Evelyn Joshua ministered. Upon receiving prayer, Grace felt better immediately and was able to resume doing things she had hitherto been unable to do. It was indeed a very frustrating period, Grace said. Her husband, Clement, shared the family’s challenges while Grace’s pain lasted. “I was a laundryman, while my son was chief cook,” he recalled. He told the church that all things are possible with God. Their son Great was unable to hide his relief about the fact that he no longer will be the cook of the house now that his mother is fine again. Demonstrating all that she can now do, Grace advised people to have faith in God.

For 12 years, Marie from Cameroon was under the bondage of a spirit husband, who brought all sorts of problems to her life, including making her lose her job and career. The spirit husband was also always on hand to prevent men from marrying her, as it would get in the way and cause a breakup. In terms of her health, Marie also had partial paralysis of her face as well as a tingling sensation in her uterus that made it difficult for her to lead a wholesome life. Two weeks ago, while receiving prayerful ministration of the New Anointing Water from Pastor Evelyn Joshua, the spirit in Marie manifested before feeling forever. Today she is certain of a bright new future in Jesus Christ, even as all her health issues are now over. “Persevere in God,” she advised the church.

Before she visited The SCOAN in August 2019, Ifeoluwa had been facing a major problem: She could not have a baby and doctors had told her that she would cease menstruating before turning 40 years old. With her faith built up by the numerous testimonies she had seen on Emmanuel TV, Ifeoluwa had attended a Living Water Service when she first came to The SCOAN. As at that time, she had not been menstruating. However, shortly after she took the Living Water, she realised that her menses had returned. Only a few weeks later, Ifeoluwa found that she had fallen pregnant. The same God who allowed Ifeoluwa to fall pregnant also made her carry the pregnancy to term—to the delight of her friends and family members. However. The devil struck along the line, as hot liquid poured on the little baby, Temitope, burning her skin very badly. The burns were so bad that doctors considered cutting off one of Temitope’s arms. Before the amputation, however, the Spirit of God visited the hospital where the baby was receiving treatment, coming in the form of an image of Prophet T.B. Joshua. To the amazement of the doctors, Temitope began to heal immediately after the divine visitation, which was seen by only Ifeoluwa. Temitope started by lying on the side of her body that had been most affected by the burns. Subsequently, she began to move her limbs and respond to her environment. And when Ifeoluwa received the Morning Water shortly afterwards, she started ministering it on the baby, who improved with each passing day. As proof of God’s impartiality, all of those who were in hospital with Temitope also received divine healing. Ifeoluwa advised people to keep praying to God and believing in Him.

Over the years, a stubborn spirit husband had been behind the problems in Blessing’s life. The malevolent spirit constantly made her angry and irritable while also making her suicidal and bitter towards the world. Every now and then, Blessing and her husband would suddenly realise their rings were missing. One day, the spirit appeared during the night and undressed Blessing’s little baby, neatly folding her dress by the side of the bed—causing the family to panic. Interestingly, Blessing introduced her husband, Clement, to Emmanuel TV and they eventually started attending The SCOAN together. Clement soon realised that Blessing’s problems were the result of spiritual warfare. Along the line, she had a dream in which Prophet T.B. Joshua appeared to her and told her she needed deliverance. Two Sundays ago, however, Blessing received her deliverance during the Anointing Water Ministration session. Since then, to the glory of God, the spirit husband has stopped visiting her and her dreams are now positive. Now filled with renewed hopes for the future and ready to return to school to finalise her qualification as a barrister, Blessing advised everyone to make God’s Word the standard for their lives. Delighted at his wife’s deliverance, Clement advised people to stay close to God while glorying in their tribulations, assured that God will rescue them in His time.

Among those on the Prayer Line, two people testified at the end of the service. First was 52-year-old Soala from Rivers State who was unable to walk freely because of lumbar spondylosis, which had caused her to depend on a lumbar corset. She advised people to seek solutions to their problems only with God.

Second was Clifford, a Nigerian resident in Cameroon, who had been having serious issues with walking and moving around. To lessen his pain, he had to depend on a lumbar corset. “I used to move like somebody who was disabled,” he recalled. After a healing sensation surged through his body, he said: “I can play football now.”

A third testifier, Onyinyechi, had received her healing during the service of December 2, 2021. She had come with the problem of swollen leg due to injury. Since the date of her healing, she can now do the things she had been unable to do before, such as bending, squatting and walking properly. She advised people to use their faith to put a demand on the anointing.