FOCUS ON JESUS CHRIST, NOT YOUR SITUATION - The Synagogue, Church Of All Nations - SCOAN - Prophet T.B. Joshua (General Overseer) Skip to content 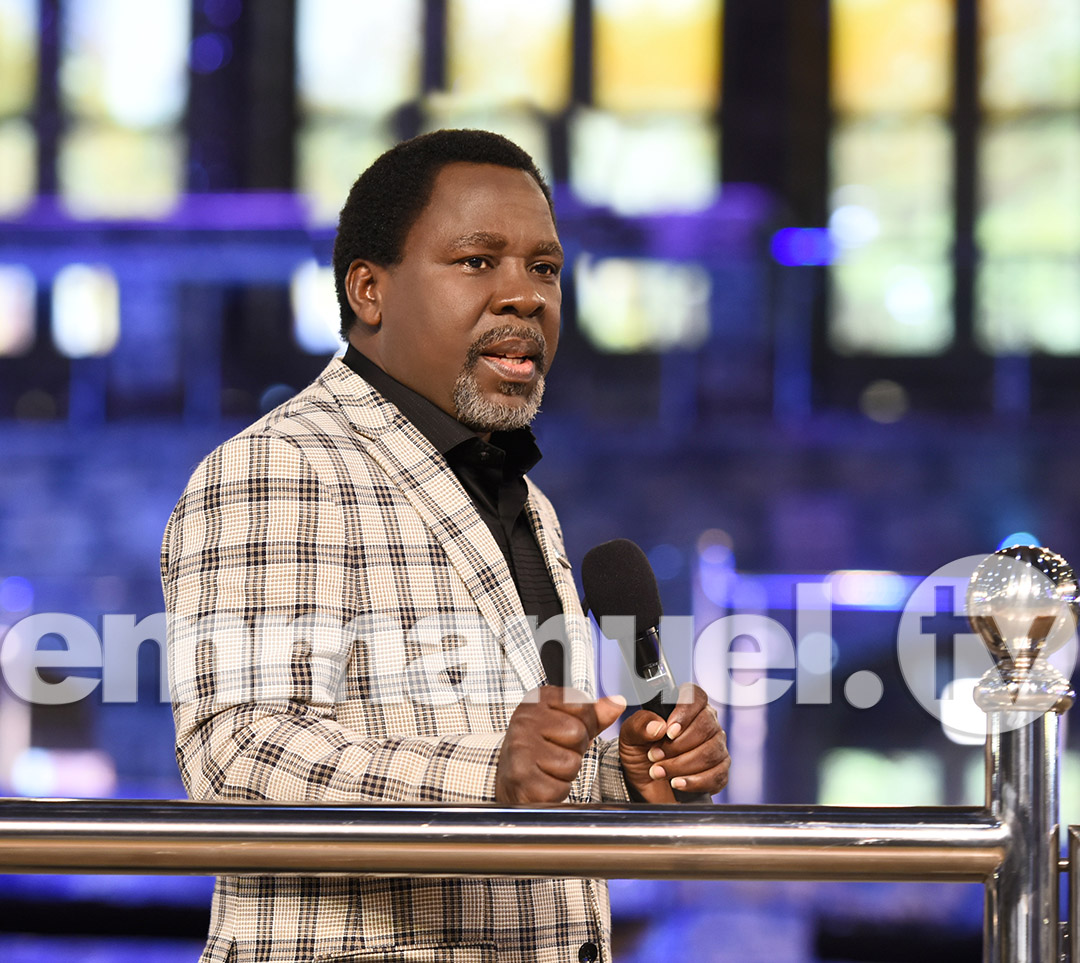 Because they agreed with God’s servant Prophet T.B. Joshua that the heart is our contact point with the Holy Spirit, The Emmanuel TV Choir started the worship session by singing, “Welcome To My Heart O Holy Spirit!” The more they sang, the more the Spirit of the Lord fell upon congregants, many of whom vomited everything untoward in their systems.

“Focus On Jesus Christ, Not Your Situation,” said Evangelist James as he announced the topic of his very first message on The SCOAN Altar. His ministration of the Word clearly reflected the impact of his years of tutelage under God’s mightily anointed servant, Prophet T.B. Joshua. Evangelist James read from Matthew 14:22-30, the passage in which Jesus walks on water and invites Peter to do same in faith.

Regarding Peter’s doubting, which caused him to start sinking, Evangelist James noted that failure to focus on Jesus Christ has led many Christians to suffer lack of peace and experience avoidable prolongation of other problems in the material world. “Like Peter,” he said, “by focusing on their situation, they begin to sink…become overwhelmed by their situation.”

Teaching further, the preacher read from Isaiah 26:3, Isaiah 43:1-3 and Acts 16:16-28, among other passages, as he urged congregants not to magnify their problems but to focus on the Problem Solver—Jesus Christ—and be thankful for all that they have so far received. He therefore encouraged the church to take stock of their spiritual affairs and change their focus. Evangelist James concluded: “If you want to be victorious or successful in life, focus on Jesus Christ, not your situation.”

Alongside Pastor Evelyn Joshua, evangelists Chisom, James and Joseph ministered the New Anointing Water for the deliverance of those in bondage and for the ease of the suffering. Glory be to Jesus Christ!

“This is a time to break loose from every prison,” said Pastor Evelyn Joshua as she joined congregants for the Mass Prayer. She then asked them to cast their burden on Jesus Christ. “Your enemy shall see the finger of God in your life,” she declared.

Evangelist Chisom asked congregants to pray: “Every limitation in my business, career—be broken!  Every setback in my finances—be broken!”

In a Mass Prayer clip, Prophet T.B. Joshua said: “Right now it is time to release all souls under bondage, dominion of demons, sickness, disease.” He then declared: “Receive your freedom, in the name of Jesus! Whatever you must have eaten from the table of the enemy—begin to flush it out!” Finally, he proclaimed: “The way out for you has come!”

A Touch Of Healing For Elaigwu

On January 1, 2022, Elaigwu had felt a sharp pain in his back as he bent to pick up something. Immediately, he began to feel such searing pain that made him panic. Although he took pain-reliving pills, he did not feel any better and soon lost the capacity to do anything by himself. Who to call? He had his family in mind but at this point he was too weak to use his hands! He managed to get someone to call a relative’s number on his phone. After a while, the person showed up and took Elaigwu around for help. In the course of seeking a solution, they went to different worship centres. Surprisingly, the person who had come to Elaigwu’s aid also came down with severe back pain that lasted for two weeks. Even more, Elaigwu’s wife developed severe leg pain when she began massaging her husband’s back. At this point, it became clear to Elaigwu that he had been struck by a spiritual arrow from the enemy. A fortnight ago, he found his way to church. There he heard these words: “Be healed! Be freed! Be delivered!” Those were some of the words uttered with faith-backed authority by Pastor Evelyn Joshua as she prayed for Elaigwu. “It was a wonderful experience,” said Elaigwu as he testified the following Sunday, February 27, 2022. Given his experience of how the arrow left his body during prayers, Elaigwu advised people to position themselves to receive from God. “All we have to do now is to thank God,” said Elaigwu’s wife as she glorified God for healing her husband and putting the devil to shame.

For a long time, Alice suffered from difficulty in walking due to lumbar spondylosis, arthritis and stomach pain. The doctors could not help her. Her drugs could not help her. And neither could her family help beyond empathising with her. Now out of human options, Alice took her case to God as she received prayer from the woman of God two weeks ago. Last Sunday, Alice returned to church to testify about the divine restoration of vitality to her body and limbs. “See me walking freely!” she said excitedly as she demonstrated the things she had been unable to do before, such as walking briskly, dancing and moving without pain. In the light of her testimony, she advised people to stay focused on God. Alice’s son thanked God for healing his mother, as the family no longer needs to aid her all the time. “The attention was always on her…as old as she was, she was always crying,” he recalled. Glory be to Jesus Christ!

Teenager Deborah witnessed the raw power of God two Sundays ago when she received her healing from toothache leading to cheek swelling. While at The Prayer Line, she had received prayerful ministration of the New Anointing Water by Pastor Evelyn Joshua. Immediately after the prayers, Deborah found that her pain had vanished. Besides, in just a matter of days her swollen cheek returned to its normal state. As a result, she can now sleep peacefully and do other activities freely. Deborah’s mother advised people to believe in God’s power to heal.

Last September, as she jotted down the items she would need for her birthday, Chizoba had felt severe pain in her stomach. The discomfort had been so severe that her customers had later noticed it and advised her to take care of herself. After seeking help over the counter for some time, she eventually went to doctors, who confirmed that she had stomach ulcers. Meanwhile, Chizoba had been praying along with Prophet T.B. Joshua on Emmanuel TV. Later on, she made her way to church for prayers on January 30. “I felt this blow on my stomach,” she said about the prayerful ministration of the New Anointing Water by Pastor Evelyn Joshua. She had vomited in church as she received prayer and when she got home, she had placed the New Anointing Water on her stomach. Following this action, Chizoba vomited even more and later expelled a substantial amount of unusually smelly solid waste. Assured she had been healed, Chizoba resumed eating foods prohibited to sufferers of stomach ulcers. To her utter delight, she felt no discomfort whatsoever. She then went to her doctors, who confirmed that her ulcers had indeed vanished. “Just believe,” Chizoba advised the church.

Deliverance Galore For The Stanley Family!

For Wealth and her family, it was deliverance galore last week as the demonic forces troubling them were exposed before fleeing forever. For Wealth, those demonic forces had always brought her disappointment in her relationships and academics; her scripts were always missing, leading to failure. She was also always moody and full of anger. Besides, her family constantly suffered financial difficulties, leading to conflict between her parents. During her deliverance, the spirit in her manifested violently but God subdued it. Since her deliverance, Wealth now sleeps well and no longer feels pain all over her body.

Magdalene, the mother of the girls, had been warned not to marry the man she married. On the day before her marriage, she had landed in hospital after collapsing on her way to board a bus. From then on, she began having nightmares in which a dwarf would order her to quit her marriage. Even worse, every business she invested in kept failing, yet she could not get any lasting solution from those to whom she turned. Since her deliverance, Magdalene has been freed from all the bad dreams and she feels wholesome in the power of Jesus Christ.

For Mr. Stanley himself, life had been a big, endless battle since he got married. He described himself as working like an elephant but having nothing to show for it. To the glory of God, however, Stanley is now a changed man, with his destiny restored in Jesus’ name. Also speaking was Jesse, the footballer son of the family, whose career had been affected by knee and heart pain. Since his family’s deliverance, Jesse no longer feels the pain and he can do things he had been unable to do before. Stanley advised people to run to God and to bring up their children in the way of the Lord.

Delivered From The Malice Of Demonic Forces

It was also another testimony of supernatural deliverance for Amarachi and her family by marriage. Eleven years ago, while much younger, Amarachi had faced torment from evil spirits who manifested as masquerades in her dream. They flogged her so much that by the time she woke up, she found herself partly paralysed. In the search for a solution, Amarachi’s family took her to several places, including a native doctor’s home. After many weeks, the native doctor suddenly sent Amarachi and her mother away. Not only did he send them away but he also symbolically swept their feet away from his premises. Eventually, Amarachi managed to recover at a hospital. Two Sundays ago, however, after many years of nightmares that she always shared with her husband, Amarachi received her deliverance from the stubborn spirits troubling her life. Since then, she has been sleeping blissfully and peacefully. She advised people to take their dreams seriously, praying against negative ones and placing their hopes in God. Sarah, Amarachi’s sister-in-law, also received her deliverance from the spirit of stubbornness. Sarah’s parents testified that she is “a good girl now” who no longer needs to be forced to go to school or do her chores. Sarah advised people to trust in God always; she also advised the youths to respect their parents.

Mrs Raheem received her healing from body pain during the Mass Prayer. She vomited the poisonous substances in her system and received strength all over her body. She is now perfectly fine, to the glory of God.

All the way from Ghana, Felix had come to The SCOAN for prayer over his lower-back pain. During the praise session, he had realised he could dance without feeling any pain. No longer needing his lumbar corset, Felix can now squat and turn his body freely. He advised people to take their problems to God.