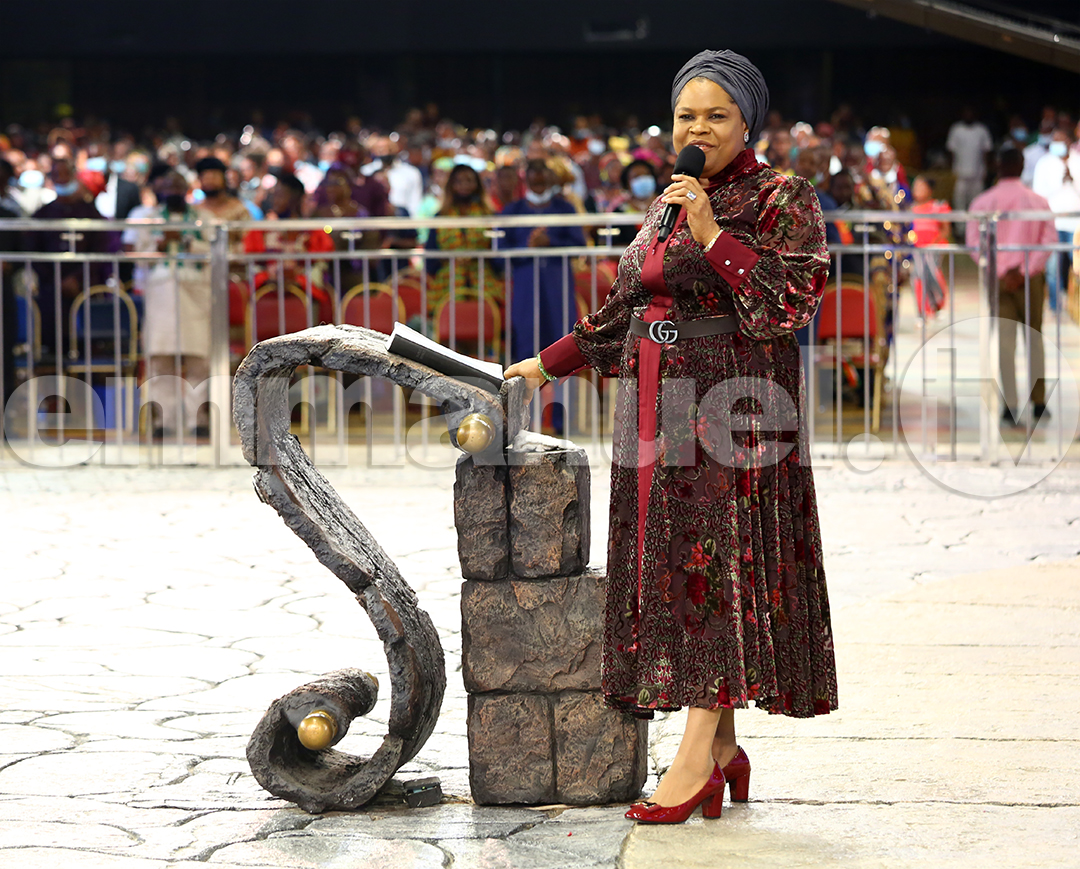 During the Sunday Service of February 13, 2022, the Lord Almighty manifested Himself, as usual, in the lives of hundreds of congregants who had converged on The SCOAN from all over the world. It was a sign of what was to come when The Emmanuel TV Choir began by acknowledging our need for God at all times. “Lord,” they sang, “You know I can’t do it alone.” So they continued, “That is why I bow my knees in prayer.” And the One who rescues and rescues completely—The Agbanilagbatan—opened His arms wide and received those desperate for help into His Kingdom.

A short while later, Pastor Evelyn Joshua stepped onto the altar to minister on the topic “A Deliberate Sinner”. She took her reading from John 5: 1-15, noting as follows: “If you make excuses for your sins, your sins will not be excused.” Earlier, she had cited Psalm 51, the psalm in which David displays penitence after sinning against God and offending man. After inviting two congregants to give their own definitions of ‘a deliberate sinner’, she stated, citing Prophet T.B. Joshua: “A deliberate sinner is he who knows sins and does them.”

In the well-illustrated message, for which she cited numerous biblical passages including Galatians 5:19-21 and Psalm 68:18, the woman of God made it clear that we cannot continue to sin wilfully and expect God’s Spirit to abide with us. On that note, she had asked congregants to proclaim: “I will give God my time. If I give God my time, He will take care of me.”

The woman of God also said, “The best antidote against the poison of sin is for us to walk in the Spirit.” As such, she advised Christians not to have respect for sin and to realise that only God Almighty can help them to resist satan and his agents. She therefore advised the deliberate sinner to have a change of heart by obeying God no matter how difficult it is and to quit from the old, usual ways of life.

All Burden And Pain Vanishes At The Prayer Line!

“Father, we ask for your healing power,” prayed Pastor Evelyn Joshua as she was about to minister healing and deliverance at The Prayer Line. She continued, “We ask for your deliverance power; we ask for your freedom.” And as the woman of God ministered the New Anointing Water to those ailing in body and mind, all burden and pain disappeared in the mighty name of Jesus Christ.

God’s power equally prevailed as the evangelists ministered prayers of healing and deliverance across the auditorium as well as the Overflow Section and the Nursing Mothers Section. Every stubborn contrary spirit eventually fell flat on the floor as God’s power in the New Anointing Water forced out confessions from the agents responsible for untoward things in the people’s lives.

Prayer That Leaves Out No One

Joining the woman of God, the evangelists took turns to rebuke all contrary spirits. “Every contrary spirit that causes torment and oppression—I command it out!” prayed Evangelist Chisom.

Evangelist Joseph then prayed: “The name of Jesus has been given to you; all things are possible to Him that believeth. All authority has been given to that name. Every spirit that causes sickness and infirmity—come out!”

In a Mass Prayer clip, Prophet T.B. Joshua charged congregants: “Every spirit that queries your business, career, destiny—begin to command it out!” He prayed further: “Every familiar spirit we command your existence: Out!”

To the glory of God, prayer that knows no boundaries struck out every infirmity in the lives of the people!

Below are testimonies shared by those who received from the Lord during previous services.

Chronic Piles and Difficulty In Walking Healed As Son And Father Receive From God!

Fifteen years ago, Michael had developed piles. The problem had been so severe that he could not sit properly and he always expelled blood when defecating. He ran from pillar to post but found no solution. Soon, life became miserable for him. A fortnight ago, however, Michael received ministration of the New Anointing Water during. On that experience he said: “Inside of me I felt something like electricity and ever since then I have been OK. I do not defecate blood anymore or feel any pain.” His father, who had come to Nigeria from his USA base in order to check up on his then ailing son, also testified about his own healing from difficulty in walking. “I can walk like a young man now,” said the 80-year-old. “God is the only person that can heal and deliver,” he told viewers all over the world.

The first evidence of Jesus in the life of Samuel, after he received the impact of God’s power during the prayer ministration by Pastor Evelyn Joshua two weeks ago, was the ease with which he fell asleep. Because of mental issues, Samuel had been a source of nuisance to his family and neighbours. He was constantly aggressive and noisy. According to his mother, the 23-year-old had already given up on life, always threatening to kill himself. A loner, Samuel neither kept friends nor was he interested in the material things that would thrill people his age. After quite a struggle, his mother had managed to drag him to church on the day in question. As he received the Anointing Water, the contrary spirit in Samuel had manifested violently before fleeing forever. Tearfully, his mother exclaimed during their testimony last Sunday: “I thank God for what He did in the life of my son!” Speaking himself, Michael, who is now as calm as a dove, thanked God for setting him free. He said that he now understands the joy of life and living. “Since this week I have been sleeping in the afternoon,” said Samuel, who used to have a hard time sleeping even at night. “Sometimes I would be awake for one week, he added while explaining the effect of using hard drugs. “Do not get involved in anything that will damage your soul,” he advised the youths. Samuel’s mother advised other mothers never to give up on their children but to pray and wait on God for their turn to receive.

Fourteen-year-old Teniola had been initiated into the occult when she was just 10 years old. How did it happen? It happened after long exposure to TV cartoons portraying demonic characters! Because the demons had first connected with her in the spirit world, it was easy for them to get her consent when they appeared physically to her and invited her to become a queen in their kingdom. Their promise to her: “We shall make your parents rich and give you supernatural powers.” And they did give her supernatural powers. So, Teniola began to know things ahead of time, although people always failed to take her seriously. As proof of the existence of the power promised her, Teniola said she successfully commanded illness into the body of a schoolmate who had offended her. However, her demonic friends failed to make her parents rich although they kept putting money in her own bag for her to buy things with. To worsen matters, her grades began to drop and she became unruly, even as her demonic friends kept reminding her in the dream that she would die at the age of fifteen. Even more, she always preferred to stay by herself, especially in the dark. Troubled by the situation, her parents brought her to The SCOAN two Sundays ago for prayers. As one of the evangelists came close to her, Teniola tried to run away but the Holy Ghost arrested her and the demons in her reacted angrily before loosing their hold. Since her deliverance, Teniola has returned to being the dutiful, obedient and studious child that she used to be. Her mother advised parents to watch over their children, while Teniola herself advised people to be careful about what they say and think. “There is power in the tongue,” she reminded them.

Foot Ulcer Healed In The Mighty Name Of Jesus Christ!

A week to her birthday, Oge had suddenly developed pain in the right foot as she went to open her sister’s shop. She had thought it was a minor problem, perhaps something caused by her shoe. As time went on, however, the problem worsened and Oge’s life became miserable as the foot pain became ulcerous. To make any movement she had to hop on her left leg. Eventually she made her way to The SCOAN, where the woman of God prayed for her with the New Anointing Water. As the water landed on the ailing foot, Oge immediately felt the impact of God’s power and her healing started. The following day, she had a dream in which a cockroach tried three times to land on her head; eventually she killed it. The following day, she had another dream in which an angel helped her to kill a snake. From then on, Oge’s healing was so rapid that she could come to church in sneakers last Sunday. Now she can walk and jump on both feet for the glory of God! She advised people to have faith in God, for whom all things are possible.

No More Lethargy And Exam Failure For Busayo And Oloruntosin

It was 20 years ago when Busayo suddenly found herself feeling the irresistible urge to “go out and have fun.” Nudged by this rebellious spirit, she moved out of the house, hanging out with friends, partying always and ditching school. Seven years ago, however, she realised her need for God, especially as she became constantly ill. She was always short of blood and energy. “I could not walk a few metres without feeling tired,” she recalled last Sunday, during her testimony. “I always envied people with good health,” she confessed. In the course of her afflictions, a voice had kept threatening her: “You are soon going to die.” The spirit behind the voice had been so bold that it threatened to kill Busayo inside the church a fortnight ago. Mercifully, however, Busayo received her deliverance after the spirit in her manifested. Since then, as her sister Oloruntosin also testified, Busayo has regained her vitality. Oloruntosin herself gave a testimony on how she had eventually passed her bar examination at the fourth attempt, after sharing her three previous failures with Prophet T.B. Joshua in 2019. “Go and write the examination,” the man of God had waved her off in unshaken faith. For the five days of the examination, Oloruntosin sang: “Sin’s Power Over Me Is Broken.” And she passed at the end of it all! “Have faith in God,” she advised listeners and viewers. Similarly, Busayo advised people to be strong in their faith.

After the service, two of the prayer recipients at The Prayer Line testified about what they had received from the Lord. Mbo Kapepula, a 21-year-old sportsman based in the USA no longer needed his leg brace! And now he can return to sporting action!

Amarachi also received her healing from cervical spondylosis. During the prayer, she had vomited the poisonous substances in her system and now she no longer needs her neck collar. “It is only God that can heal,” she said.