TRUST GOD ALL THE TIME - The Synagogue, Church Of All Nations - SCOAN - Prophet T.B. Joshua (General Overseer) Skip to content 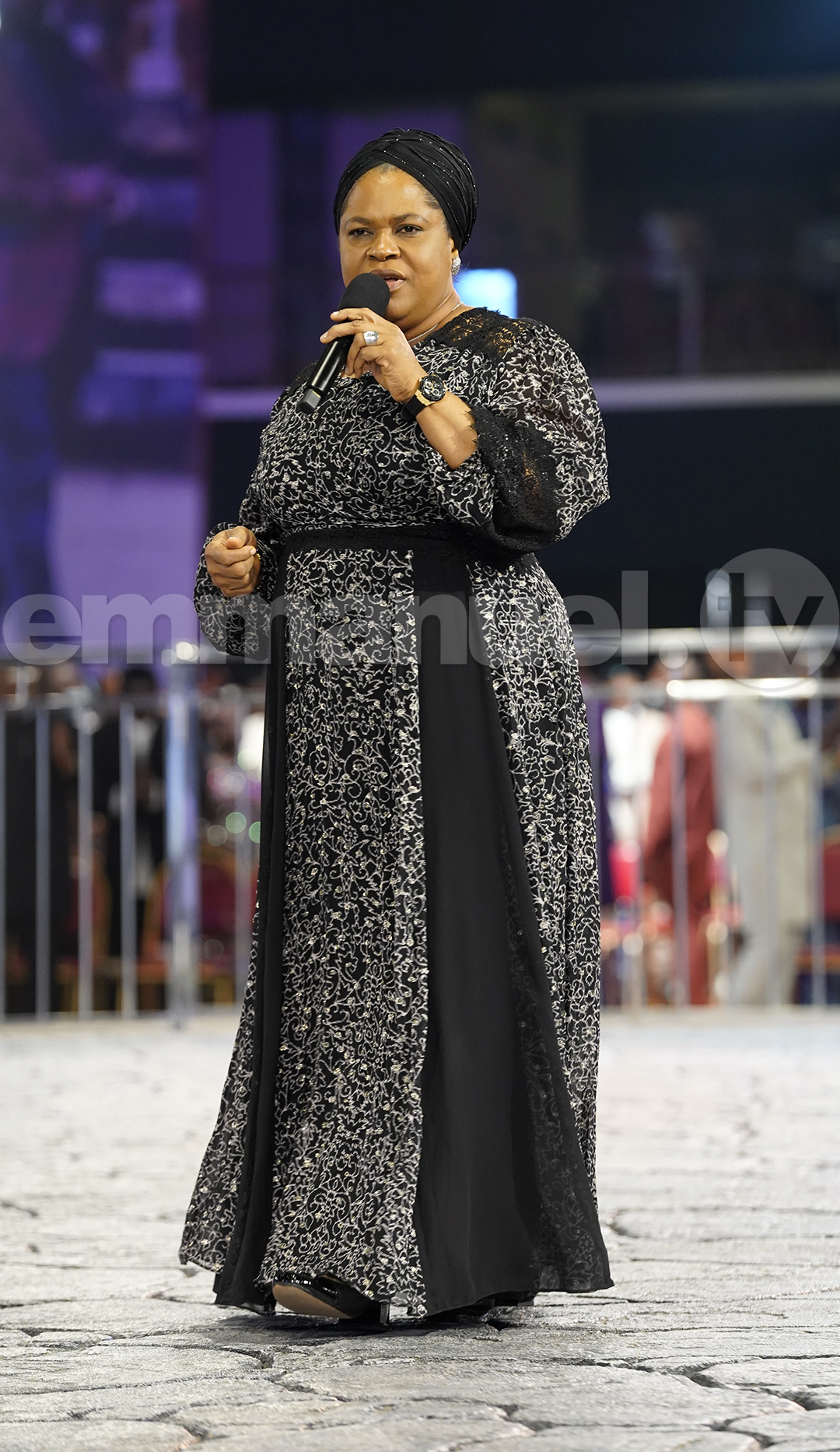 It was the last Sunday of January 2022, so it was fitting to worship The Most High with reckless abandon for His enduring mercy, grace and favour. Leading congregants to do this was The Emmanuel TV Choir, who rendered some of the most inspiring worship songs in their repertoire.

They began thus: “We Worship You, Our Lord/You Are Worthy To Be Praised!” And as the people started to feel God’s presence, the work of healing and deliverance was set in motion.

And Bello Can Urinate Again!

On December 12, 2021, Bello, from Edo State, was one of the people in the prayer line during the SCOAN Sunday Service. He had a worrying problem of difficulty in urinating but he trusted that God Almighty would heal him. The problem had started five months earlier after he had an infection. “Those five months felt like five years,” he recalls. Despite having a catheter inserted, his condition did not improve and he continued to experience severe pain, but he refused to have the operation. After receiving the New Anointing Water, Bello felt immediate relief. “The pain disappeared immediately after the prayer of the Servant of God,” he said. The next morning, he felt a sensation that confirmed that God’s right hand was on his body. He then went to the toilet and expelled a disturbing blackish substance. Shortly afterwards, he went to his doctor, who decided to remove the catheter. “I started urinating immediately,” Bello says happily. Since then, life has returned to normal for him. “I have my manhood back!” he said. His wife thanked God for the healing. “I am very happy,” she said, and advised people to put their hope in God. Bello told the congregation, “Only God can set us free.” His daughter Evidence said, “I am overjoyed; God is The only solution we have.”

A Gift from the Heart to 63-year-old Victoria

After the death of God’s servant, Prophet T.B. Joshua, all 63-year-old Victoria, a long-time SCOAN follower, had in mind was to return to her village of Iyin-Ekiti, Nigeria, and stay with her younger sister. Many years ago, she had come to SCOAN with many problems and questions and the servant of God had accepted her wholeheartedly, supporting and guiding her every step of the way. No wonder she thought it was “over for me” when the servant of God transited to glory. She then told the servant of God of her plan to return home. Prompted by the Holy Spirit, Pastor Evelyn Joshua promised to build her a house in Ekiti. It was like a dream for Victoria. But this dream became a reality a few months later! No, the fully furnished house was not built in the village, but in the city district! Amazed by this incredible gesture, Victoria shared her testimony with the world last Sunday. Her younger sister, who accompanied her to church, also recalled how a contact with Prophet T.B. Joshua some five years ago ended her 17 years of infertility. “Nothing is impossible with God; let’s have faith in Him,” said Victoria’s brother-in-law Wahab. “Let’s focus on God,” Victoria said.

Last Sunday, another Bello family in Edo State also testified, after receiving the New Anointing Water a fortnight ago. Patience, the woman of the house, led the testimony session. She told the congregation that she came from a family that practised the mask cult and that she had been initiated into this cult. This initiation brought rejection and constant disappointment into her life. From time to time, she would see masks chasing her in her dreams. After her marriage, Patience had a very difficult delivery when she was about to have her first child, Austin. After four days, she finally gave birth, but not before appeasing the spirit of the masks that were running through her life. After Patience’s second child, Mary, was born, the mask spirit caused discord between the siblings as they grew up: they couldn’t stand each other. In addition, their father was constantly frustrated whenever he tried to set up his wife in business, as he surprisingly lost money and faced inexplicable disappointments in business. However, after the family received their deliverance, perfect peace has now been restored to their home. While Austin says he is now free from spiritual women and his addiction to lust, Mary says she is now free from the spirits of depression and aggression that constantly drove her to fight against her brother. More than that, Mary says she is now ready to reconcile with people and make friends. “There is peace and joy in my family,” Patience said. “It is a joy that they are all delivered today,” said Abdulraman, the head of the home. “Run to God,” Abdulraman advised those facing similar problems. Mary advised the young people to respect people older than them and to have faith in God. Austin advised people to always call on God.

Mother and Daughter No Longer Hostages of the Marine World

The Ogbueze family experienced deliverance from two generations last week, as the mother and daughter were freed from the contrary spirit responsible for their problems. Chioma, the mother, said she became fully aware of the situation when she disappeared with two women after greeting them on her way to the farm as a teenager. “I saw myself in a river, a beautiful place with people of all ages,” she recalled. She said that by the time she returned home, she had become very powerful and could manipulate anyone she wanted, especially men. Speaking of the power in her eyes, Chioma said, “When you looked at me, you had to submit if God was not with you.” Thus, she had been responsible for ruining the businesses of the many men she slept with. She also had a power in her palm, which she used to take people’s body parts and send them to the kingdom of darkness. The same spirit had been responsible for problems in her marriage, particularly in her efforts to have children. During her daughter’s pregnancy, she had been so seriously ill that the doctors expected her to die; they had even asked her husband to pay a deposit for the admission of her body to the mortuary, even though she had not yet delivered her baby. Miraculously, Chioma ended up giving birth without surgery despite her very low blood levels. Amazingly, after the birth, the baby disappeared for five hours until it was brought back by a strange man who had also brought money with him. Of course, this incident caused panic in the hospital!Other strange incidents occurred over time, one of which was that the baby died and was prepared for burial, but was then revived after being taken to a witch doctor. “You must return her when she is fifteen,” the witch doctor warned. Taking up the testimony, the girl in question, Amarachi, said that she had received spiritual visits from a certain woman, an agent of the Queen of the Coast. Eventually, the girl obtained from the agent of darkness a so-called spiritual fortification in the form of a pearl on her waist. Henceforth, any man who slept with her began to suffer financial losses until his business collapsed. To the glory of God, the activities of the malevolent forces came to an end last week in the lives of the mother and daughter after their deliverance during the administration of the New Anointing Water. “I feel like a heavy weight has been lifted from me,” said Amarachi. “I feel like a human being now,” said his mother. “Now I can drink water, unlike before,” Chioma added. “Be content with what you have and submit your problem to God,” she advised the devotees. Before giving her own advice, Amarachi recounted how three men had tried to tempt them to deny the deliverance they had just received. “Make God your best friend and he will help you get out of it,” she advised everyone.

“See What The Lord Has Done/What We Have Been Waiting For Has Arrived,” sings the Emmanuel TV Choir as the congregation prepares to hear the word of exaltation in the Sunday Service.

For his message entitled “TRUST GOD ALL THE TIME”, Evangelist Shina John took his proof text from Jeremiah 17:7-8, where God assures us of blessing and prospering whosoever trusts Him in all circumstances. Accordingly, the preacher noted that “The quality of faith is not measured by our attitude toward God when things are good but when times are hard.”

Evangelist Shina John cited biblical examples of people who trusted God even when the evidence before their eyes seemed negative, such as Job, Paul and Silas, and the three Hebrew children. He reminded the church, “Our physical eyes can see the darkness but our eyes of faith will see the solution, the way out, the light.”

The preacher also referred to 1 Corinthians 15:33 and 1 Corinthians 10:13 as he urged congregants not to try to figure God out through their feelings. And in words worth engraving on the believer’s heart, Evangelist Shina John warned: “If you handle your hard times with care, it will soon turn to good times. And when you do not handle your good time with care, it will soon turn to hard times.”

Whatever their cases—be it difficulty in walking, drug addiction, swollen belly, leg tumour, uncontrollable urination, epilepsy, mental disorder, body injury, leg ulcer or tuberculosis—God stepped in and changed the stories of all those who brought their cases before Him last Sunday as woman of God Pastor Evelyn Joshua ministered prayers of healing, blessing, deliverance and breakthrough with the New Anointing Water.

For the ultimate salvation of their souls, hundreds of congregants had the contrary spirits in them expelled in the mighty name of Jesus Christ as evangelists Chisom, Joseph and James declared healing and deliverance upon them with the New Anointing Water, God’s special gift to the world. “Thank You, Jesus!” the people exclaimed.

Rewarded For Their Faith: Effectual Prayer In The Name Of Jesus Christ.

More healing, deliverance and breakthrough happened in the lives of congregants and viewers all over the world during the Mass Prayer session.

Before declaring them free in the mighty name of Jesus Christ, Pastor Evelyn Joshua asked congregants to pray: “Lord Jesus Christ, open up my understanding so that I will know your will concerning my situation.”

Evangelist Chisom prayed: “You sickness, disease, affliction—anywhere you are in my body, organs, I command you by the power in the Word of God—out! My body is not your temple—be flushed out by the Blood of Jesus!”

Evangelist Joseph urged the church: “Open your lips and speak your way to freedom, breakthrough, blessing.” He then asked congregants to speak thus: “I break every cycle of limitation in my business, career, destiny, in the mighty name of Jesus Christ.”

From virtual space, Prophet T.B. Joshua declared to contrary spirits: “Every place where you hide, I command you out.

Wherever you are, you familiar spirit, I command you out, in the name of Jesus Christ!” He further prayed: “Every organ—begin to function!”