YOUR WORD, YOUR BOND - The Synagogue, Church Of All Nations - SCOAN - Prophet T.B. Joshua (General Overseer) Skip to content 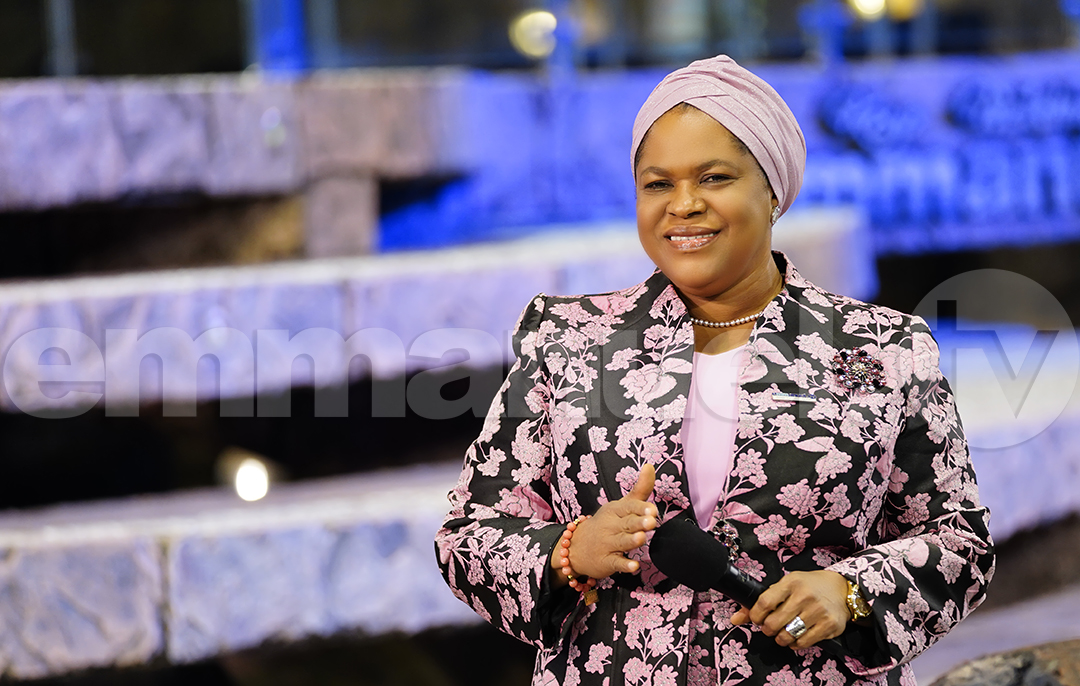 Woman of God Pastor Evelyn Joshua gave a sermon entitled “Your Word, Your Bond”, taking her proof text from Psalm 91:2, the passage in which the Psalmist describes God as his Refuge and Fortress. She started with prayer: “Father Lord, we thank You. Jesus Christ, we praise You. Holy Spirit, we honour You. Father, we have given up to Your will. Put us in a position where You will be interested in whatever we say and do. In Your holy name we pray. Thank You, Lord! Thank You, Jesus!”

Given the role played by positive thinking and talking in our lives, Pastor Evelyn Joshua began her message proper with the following words: “The life you live is determined by the words you speak.” She then went on to observe our need for constant examination of our lives against God’s unfailing Word. According to her, Jesus Christ is interested in our thoughts, confessions and actions.

Consequently, she explained, we invariably get the repercussions of our thoughts, confessions and actions. “The blessings and curses that come your way today,” she said, “are a result of what you say.” She therefore advised against thinking and acting negatively, noting that “The Word created the world. The Word created your world. Your words rule you and your life.”

Among other Bible references for the message were Luke 12:20, Luke 15 and 2 Kings 5, with the last bit of Scripture being about the punishment that ensues from thinking and acting on negative thoughts. With regard to the generational curse placed on Gehazi in 2 Kings 5, the woman of God observed: “Many have changed the course of the history of their lives today because of their inability to see beyond their present situation. They think, talk and act negatively to their circumstances.”

As the message drew to a close, Pastor Evelyn Joshua prayed for congregants and viewers all over the world: “May God set a watch over your lips in the mighty name of Jesus. May He bind your hands so that they do no evil. May He give you the humility, understanding and willingness to listen to the wise and experienced, in the mighty name of Jesus.”

Ministration Of The New Anointing Water: Every Knee Must Bow!

During the Prayer Line session, the woman of God ministered healing, deliverance and breakthrough for the salvation of souls. There was healing for all those who came with diverse issues such as difficulty in walking, mental illness and every form of organ defect. Hundreds also received their deliverance from malevolent spirits.

The healing and deliverance session continued as evangelists James, Chisom and Joseph went into the midst of the congregation to minister the New Anointing Water. Even the most stubborn of contrary spirits fled at the mention of the name ‘Jesus Christ’!

Indeed, all those who were impacted at the service will surely be sharing their testimonies very soon. Glory be to Jesus Christ!

Prayer Without Barriers, Prayer For All!

Is there anything too hard for the Lord to do? Absolutely nothing! And that much was made abundantly clear yet again when the Holy Spirit worked through the faculties of Pastor Evelyn Joshua and the evangelists during the Mass Prayer session.

The woman of God began thus: “Father, we are grateful for Your presence here today. We thank you for Your healing. Thank You for Your mercy. Thank You for the grace. Almighty God, may Your name forever be adored in our lives, in Jesus’ name.” In one prayer point she asked congregants to pray thus: “Lord Jesus Christ, come into my life and give me the peace, favour, healing, freedom You promised.”

On his part, Evangelist Chisom prayed: “You demon, unclean spirit anywhere you are in my life – come out!”

Next, Evangelist James told congregants: “Open your lips and begin to break every curse of poverty, lack, doubt, failure, death.”

Finally, in a Mass Prayer clip, Prophet T.B. Joshua urged congregants to pray: “Every spirit that is operating in your life – the spirit of stagnation, setback, affliction, career failure – open your lips and begin to command that spirit to leave you!” The man of God declared: “If there is anything you might have eaten at the table of your enemy, begin to flush it!”

As proof that those who believe will continue to receive miracles in the house of God, a couple of congregants shared testimonies of their experiences of God’s power during the ministration of healing and deliverance at The SCOAN Sunday Service of January 16, 2022.

Sometime during the nationwide COVID-19 lockdown, Rose had suddenly developed body pain that was so excruciating that it made her cry frequently. Although she took numerous drugs, she did not feel any better. Doctors then gave her a lumbar corset but it did little or nothing to lessen her pain. As such, they suggested surgery but Rose promptly declined it. As she prepared to go into an MRI machine, which was to take pictures of the inside of her body, Rose had been so terrified of the cave-like interior of the machine that she kept wailing in fear and preventing the medical personnel from doing their job. After some time, however, she remembered a prayer that God’s servant Prophet T.B. Joshua had taught the church. After saying, “Holy Spirit, give me more of Your calmness,” she was then able to go through the test quite calmly. Rose had been particularly delighted to learn that the church had reopened, so she presented herself for prayers as soon as she could make the journey from Onitsha, Anambra State, alongside her husband, Tony. Upon receiving the water ministration, Rose responded to the power of the Holy Spirit. “Everything just cooled!” she said, when speaking about the effect of the prayer by the woman of God. During her testimony she demonstrated her perfect healing by squatting, bending and walking with ease—things she had been unable to do before. On his part, Tony thanked God for rescuing his family from all the challenges that had come their way, even as he testified about his own healing during the same service. “She can do everything perfectly now,” he said. Rose advised people to keep having faith in God’s power.

“I’m going to destroy his career—everything about him!” boasted the evil spirit in Stanley, a US-based Nigerian who had been addicted to smoking and was facing stagnancy in all areas of his life. In 2008, Stanley’s father had sent him off from Nigeria to Mozambique for business but the five thousand dollars seed capital given to him was frittered away. Stanley soon became helpless and tattered. His mother then visited him in Mozambique and gave him the anointing water, which he began ministering. Things started to change for him but he was still addicted to smoking, leading to shortness of temper. Later, Stanley moved to the US and got a well-paid job but he soon fired himself when he flared up and quit after his supervisor queried him on why he was absent from work. “The devil has been fighting me here and there; I start projects but abandon them,” he told the church last Sunday. A fortnight ago, he had received prayerful ministration of the New Anointing Water and the stubborn family idol troubling his life had eventually vanished. “After my deliverance, the urge for smoking has disappeared,” Stanley said during his testimony on Sunday, ten days after. He also said that work has now resumed on his abandoned building sites. As further of sign of his release for breakthrough, Stanley has now been offered the plot of land beside his own in the village that the owners had initially refused to sell. While thanking God for giving him a mother who intercedes for her six children, he advised people to present their petition to God with an open heart and not to give in to the devil’s plans to discourage them from visiting The Arena of Liberty.

“Growing up, I didn’t know I had a spiritual problem.” Those were the words with which Amaka began her testimony on Sunday. She was referring to the multitude of issues brought into her life by the household idol to which her grandmother had dedicated her while she was in the womb. Manifesting as a spirit husband, the stubborn idol had so troubled her life that she kept facing rejection after rejection, especially at the edge of breakthrough. “I became comfortable with failure,” she said tearfully. She also said that the spirit in her had made her resentful of marriage. In seeking a solution to her problems, she had visited a witch doctor who gave her a soap to bathe with and other things to use. Instead of her situation to improve, however, things worsened for the young woman and sleep deserted her eyes. Because of repeated failure, Amaka lost faith in divine favour, believing that only hard work could deliver her. Moreover, she became vain and thought that she needed to enhance her looks via plastic surgery in order to make headway in her acting career. She said that her deliverance had in fact started on December 12, 2021, when she was first ministered with the New Anointing Water. She said that when she had got home later that night, she had had a dream in which she saw dead, bloody pythons hanging on stakes. The deliverance became perfect last Sunday, when she again received ministration of the New Anointing Water and the evil spirit in her vanished forever. Later in the past week, she had visited The SCOAN Prayer Mountain for meditation. Surprisingly, she was unable to pray as she suddenly became weak. However, after an usher encouraged her not to give in to the devil, she picked up herself and started praying after regaining inner strength. Since then, she has been receiving offers for acting shoots. “Throughout yesterday I was at a shoot,” she revealed. She advised people to make themselves available for the Spirit of God.