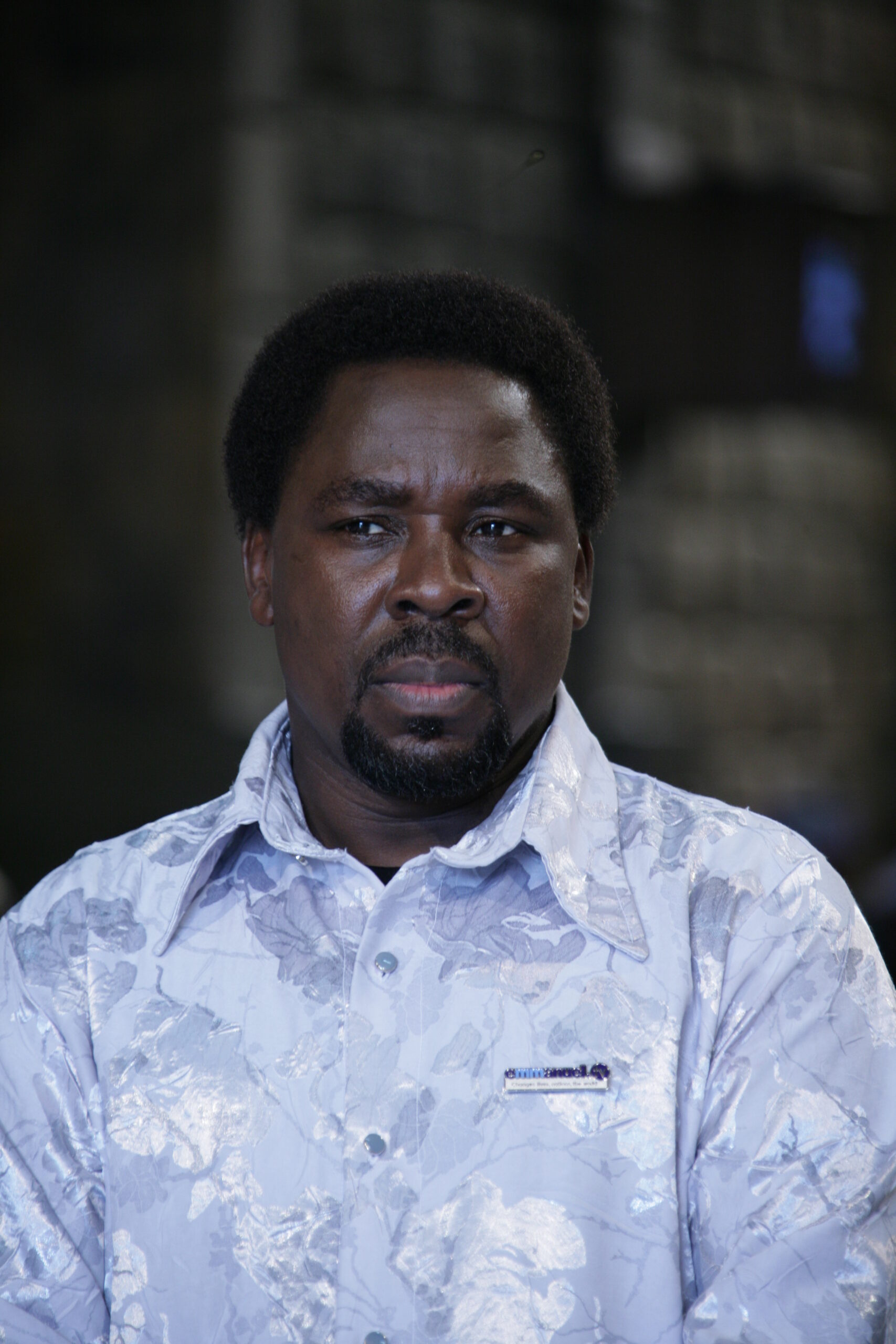 The Emmanuel TV Choir had prophetically begun The SCOAN Sunday Service of January 16, 2022 when they kicked off the worship session with songs of victory in Jesus Christ. “Victory Belongs To Jesus/Victory Belongs To Him/Forever We Win/I Found My Victory In You,” they sang. Later on, they declared: “This Is How I Win Win Win/The Smoke Of My Worship/Released Upon the Earth.” And true to their prophetic renditions, hundreds of congregants from all over the world recorded spiritual victories over the devil and his agents!

Thereafter, in a spectacular message pulsating with the power and presence of the Word, Evangelist Opeyemi spoke to congregants on the only thing that is impossible for God to do. “God Cannot Lie,” he declared emphatically to the church as he announced the title of his sermon, for which he read from Numbers 23:19.

After praising God via His numerous epithets such as ‘Ageless’, ‘Timeless’, ‘Limitless’, ‘Endless’, ‘Ever Glorious’, ‘Ever Faithful’, ‘Ever Powerful’ and ‘Ever True’, among others, Evangelist Ope dwelt on the need to hold on to God’s promises as given in His Word, no matter the circumstance. The only time to stop looking to God, Evangelist Ope noted, is whenever He withdraws His Word—which will never happen!

In the course of the sermon, the preacher cited Isaiah 55:11, Romans 4:19-21 and Mathew 24:35 before declaring: “God is not a man that misspeaks. He does not miscall. He does not mistime; neither does He make mistakes. God is a Witness and He can never lie. He is in His Word; His Word is the most important part of Him that makes Him God. He says what He means and He means what He says. He is who He says He is. He can do what He says He can do. He has what He says He has and He will do what He has promised to do.” To access all of God’s promises, however, we must exercise absolute faith, he concluded.

A Date With Destiny: Prayer And Ministration Of The New Anointing Water

“We bless God Almighty this morning from whom all blessings flow,” said Pastor Evelyn Joshua as she began the Prayer Line session. She continued: “It is another day of grace and we can count on His Word being good. God’s Word cannot fail without Him failing and our God will never fail. Our God does not lie. Thank You, Lord.” For hundreds of congregants it was a date with destiny as God’s power eliminated every contrary thing in their lives.

As the evangelists ministered healing and deliverance across the auditorium in the name of Jesus Christ, every stronghold in the people’s lives collapsed for the power of the Holy Spirit to take over. Glory be to Jesus Christ!

Evangelist Joseph prayed: “It is time to put an end to demonic activities in your life. You evil spirit, anywhere you are, hear the voice of God: Come out!”

Evangelist James prayed: “You sickness, you disease, you affliction—I call you by your name: Out!”

In a Mass Prayer clip, Prophet T.B. Joshua began the ministration of prayer with the following words: “Open your lips and begin to release yourself, in the name of Jesus…. You have been given utterances to loose and to deliver. Release yourself, in the name of Jesus! After today, you are an ex-loser! Defeat and failure are things of the past!” He prayed: “Let there be light in your life!”

“It is a new dawn indeed, in the mighty name of Jesus!” declared Pastor Evelyn Joshua as she closed the service. “Begin to confess who you are in God,” she urged congregants. She then asked them to declare: “I am healed! I am delivered! I am linked up with God!”

After 52 Years, Vivian Is Set Free From Bondage To Marine Powers!

For over 52 years, Vivian from Cameroon was troubled by spirits from the marine world. First married at the age of 16, she found herself unable to stay married as one man after the other left her because of the spirit husband bugging her life and making her act irritably towards men. She kept fighting her men and putting up a nasty attitude towards them, eventually leading to their departure from her life. The same spirit made her lose some of her children, even as it caused her constant rejection and loss of job. In the end, men started avoiding her until it got to a point when only aged men asked to marry her. Of course, the interest from such men caused her grievous irritation. In fact, on one occasion, Vivian slapped an old man so hard that he almost passed out. To the glory of God, however, Vivian received her deliverance during the Sunday Service of January 9, 2022. On that day, she was prayerfully ministered with the New Anointing Water by Pastor Evelyn Joshua. During the prayers, the evil spirit in her manifested and she became a new creature. “Always have faith; prayer is the key,” Vivian advised the church.

Also during the Sunday Service of January 9, Ngueko, another Cameroonian woman, received her healing from hypertension, a condition that had made it difficult for her to lead a comfortable life. Despite trying numerous medical solutions, Ngueko was unable to get any lasting relief. However, her story changed after she received ministration of the New Anointing Water. Immediately the power of the Holy Spirit surged through her, the malevolent spirit responsible for Ngueko’s hypertension took flight. The day after the ministration, when Ngueko took her blood pressure reading, she found that it had returned to normal. Now, she can do the things she had been unable to do before and no longer has to depend on a cocktail of drugs. Ngueko’s daughter, Angel, spoke alongside her mother and thanked God for the healing that has now also freed her from having to attend to her mother all the time. “If doctors fail, Jesus will not fail,” said Ngueko as she advised congregants on having faith in God’s power.

For years, Deborah suffered from the problem of bedwetting, which caused her to isolate herself because of shame. In time, she found that the cause of the problem was a spirit husband that kept appearing to her in the dream and making her life miserable. She would find herself in the dream about to use the restroom and once she let herself go, she would realise that she had wet herself physically. To the glory of God, Deborah received ministration of the New Anointing Water on January 9 and the spirit in her manifested before fleeing. Since that day, Deborah has been free completely in Jesus’ mighty name. “God has the final say; never give up,” she told other congregants.

Deborah’s sister, interestingly also named Deborah, equally received ministration of the New Anointing Water during the service, leading to her deliverance from the spirit responsible for severe stomach pains that had made her life horrible—to the extent of being suicidal. Since her deliverance, however, Deborah has been restored to the state in which God created her. As additional evidence of Jesus in her life, she got a surprising pay rise the following day. “Never stop praying; God answers prayer,” Deborah advised congregants. Their father advised, “Hold on to God in everything you are doing.”

No Longer Bound To Idols Of His Father’s House

In childhood, Ezekiel used to eat the foods sacrificed to idols by his parents. He didn’t know that eating those items meant bonding him to the spirits behind the idols. As he grew older, he found that he wasn’t making progress in any way, with his children constantly thrown out of school. He became suicidal, as he felt worthless about his inability to pay his children’s school fees. Every January, the spirits behind the idols would appear to him in the dream in the forms of a masquerade, an old woman with a baby on her back and a strange figure without legs. Their appearance always meant difficulty in everything he laid his hands on afterwards. Sometime ago, Ezekiel saw strange flies in his room even when there was no reason for them to be there. He picked up a broom and began killing them, panting and sweating in the process. The flies had appeared after he prayed along with Prophet T.B. Joshua on Emmanuel TV. Ezekiel then told his wife and they made their way to church on January 9, when Ezekiel received ministration of the New Anointing Water. To the glory of God, the spirit in him manifested and he received his deliverance. Later, Ezekiel had a dream in which angels killed a lizard that had been following him, meaning perfect deliverance from evil spirits. Ezekiel’s wife corroborated the testimony, even as she disclosed that she herself suffered from the activities of the evil spirits troubling her husband’s life. She said that her money kept disappearing mysteriously, even when she kept it with other people. “We should draw close to God,” advised Ezekiel. “I am going to serve God till the end of my life, with my family,” he promised.

Lauretta, a trader in Warri, Delta State, Nigeria gave another faith-boosting testimony about her healing from leg ulcer. On June 21, 2021, while trying to take delivery of her goods at the bus park, she had sustained an injury when someone mistakenly dropped a heavy load on her left foot. Although the injury was stitched and treated, it kept on causing her pain and refused to heal. At some point, her doctor suggested that it was becoming ulcerous, causing Lauretta to be alarmed. She then asked a friend to give her the New Anointing Water, which she began ministering on the injury. Along the line, she knew for sure that what had happened was a spiritual attack after two birds flew into her shop. She managed to kill one of them and continued ministering the water on her injury. In time, the foot healed perfectly and today Lauretta can do everything she had been unable to do before! Glory be to Jesus Christ! She advised people to seek God’s help for any problem they have.