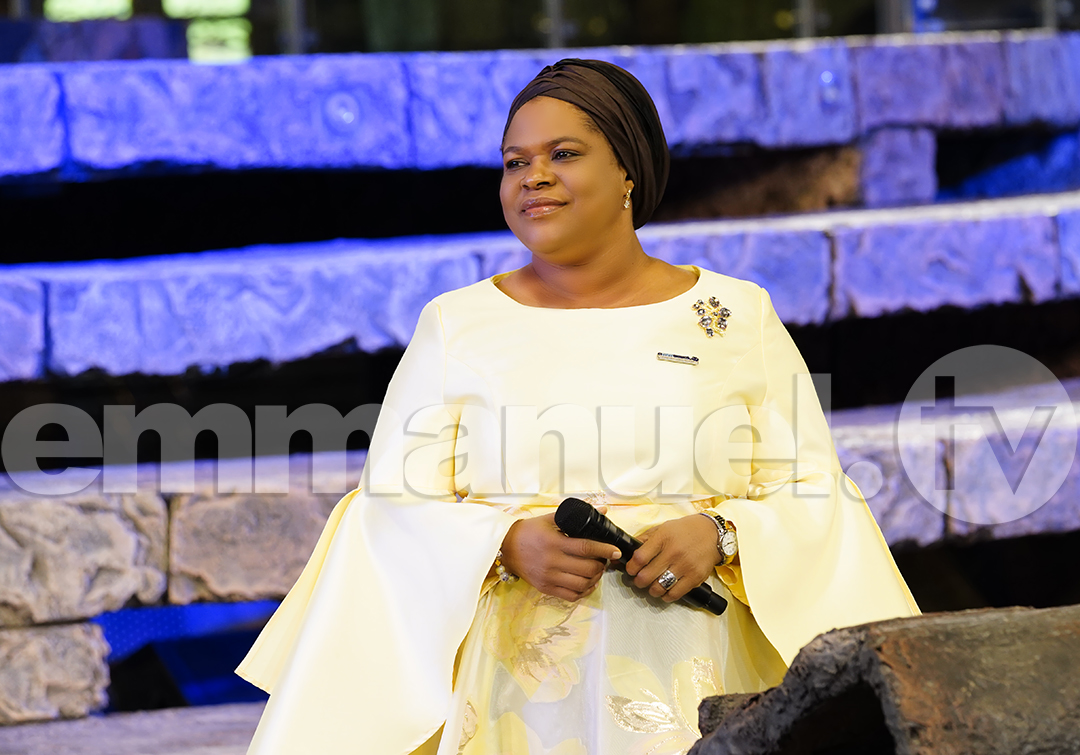 In an attitude of gratitude for God’s mercy, favour and grace that made it possible for all to see another year under heavenly refuge, The Emmanuel TV Choir began the Sunday Service of December 9, 2022 with soul-lifting, faith-boosting worship songs that called down the presence of the Holy Ghost.

“God’s Involvement Makes The Difference” was the title of the sermon given by Pastor Evelyn Joshua after the praise session led by the choir. The woman of God read from Mark 2: 2-5 after praying thus: “Father, we bless Your holy name. Holy Spirit, we honour You. Father, teach us and make us doers of Your words, not just hearers, in the mighty name of Jesus Christ.”

The proof text of Mark 2: 2-5 was the passage in which four men of faith had brought their paralytic friend in a most unusual way to Jesus Christ for healing. Because of the heavy crowd around Jesus, the men had been left with no other choice but to sneak their prostrate friend in through the roof of the building where Jesus was preaching. “Son, your sins are forgiven you,” Jesus Christ had assured the sick man as He ministered healing to him.

Pastor Evelyn Joshua therefore told congregants to prepare to involve God in their lives more than ever before so that every mountain shall be leveled and every hill made plain. “When God Almighty is involved in your situation,” she observed, “it does not matter who else is involved, because He is watching out for you.” She concluded: “I pray today that the Son of God will overlook your sins, in Jesus’ name! I pray that His mercy and grace will continue to speak for you, in the mighty name of Jesus Christ!”

During the service, hundreds of congregants got a new beginning as God Almighty became involved in their issues during the ministration of the New Anointing Water by Pastor Evelyn Joshua, as well as by the evangelists.

The woman of God started by noting: “With God all things are possible.” She declared, “Because you are here you will be healed, saved and delivered, in the mighty name of Jesus!”

As each person received prayer in the mighty name of Jesus Christ, signs and wonders followed, with the power of the Holy Spirit manifesting in different ways in the lives of the impacted. While some vomited the impurities in their systems, others reacted rather aggressively as the contrary spirits in them confessed before fleeing forever.

“Ask God to remove every doubt from you and replace it with faith,” Pastor Evelyn Joshua urged congregants as she began the Mass Prayer session. She then prayed: “Right now, we command every sickness, affliction, hardship in your life to get out now, in Jesus’ name! Every darkness within and outside you—be removed in the name of Jesus!”

Finally, in a Mass Prayer clip Prophet T.B. Joshua prayed: “Right now, take the authority of Jesus Christ and begin to command calmness to everything around you.”

Earlier in the service, grateful testifiers shared their experience of Jesus Christ’s immutable power, which heals, delivers and saves.

“I Felt A New Person In Me When I Stood Up!”

Seven years ago, Moses had woken up one morning to find that something was wrong with his body. On the fateful day, he had realised that he couldn’t keep on his feet because of general body pain. The pain kept pulling him down anytime he tried to stay upright. Doctors later diagnosed him with lumbar spondylosis, which of course implied severe difficulty in walking. “I pray nobody should experience it,” said Moses as he tried to describe the depth of his pain. After exploring all kinds of medical solution, Moses took his case to God. On December 26, 2021, he was one of those arraigned on the Prayer Line. Asked by woman of God Pastor Evelyn Joshua what he wanted God to do for him, Moses declared: “He will do His own in my life today.” The woman of God then prayerfully ministered the New Anointing Water on him. “I felt a new person in me when I stood up,” said Moses with regard to how he had felt after the prayers. And during his testimony last Sunday, Moses demonstrated some of the things he had been unable to do before. “I can even play football,” he said. “Look at me now; God has decided to change my life,” he gushed. He then advised people to realise that, with God, the best is always yet to come.

Back in 2019, Rebecca, a member of The SCOAN Youth Church, had testified about the scholarship she had just won to study for a Master of Science at the African Institute of Mathematical Sciences, Rwanda. On that occasion, God’s servant Prophet T.B. Joshua had prophesied that she would be returning for an even bigger testimony. Rebecca had imbibed the teachings of God’s servant on combining unshakable faith in God with hard work, dedication and discipline. On resuming for the programme, Rebecca was told she would graduate at Distinction level only if she made A’s in her six courses, as well as in her master dissertation. Rebecca had no problem making the six A’s in the courses, having put in all the physical and mental effort required, combined with belief in God Almighty. When it was time for the dissertation defence, Rebecca took advantage of the New Morning Water that she had been given by Prophet T.B. Joshua in 2019. To the glory of God, the Holy Spirit went before her to the defence panel. Minutes later, she was invited back into the room and congratulated on having made an A in the project, which meant she had graduated with a Distinction!

Pushing forward, Rebecca applied for a PhD in Mathematical Modelling in the United Kingdom. Not willing to take God’s grace for granted, she again put to practice all that she had learned from God’s servant. As she went before the panelists who interviewed her via Skype for the PhD application, Rebecca ensured to play a muted prayer clip of God’s servant as the interview went on. In no time, Rebecca got good news again: She had won a PhD scholarship in the United Kingdom! However, for her to claim a full scholarship she was required to write an English proficiency test and pass at a 92% level. In the end, Rebecca did prayerfully put in her best but she ended up with a score of 85%. She was then advised to request consideration for English Language flexibility. Prayerfully again, Rebecca put in the required application. To the glory of God, she was, quite unusually, granted a waiver because of the closeness of her score to the original requirement of 92%. It would later transpire that she was the only African among the numerous applicants from all over the world who had been interviewed for the PhD slots. Rebecca’s mother corroborated the testimony and glorified the Lord in tears of joy. “Indeed, there is anointing in the New Anointing Water; let’s put a demand on it with our faith,” Rebecca advised the church last Sunday.

“My Third Leg Has Now Been Discarded,” Says Woman Booked For Arthritis Surgery

“Oh, thank You, Jesus!” cried Caroline after she received her healing following prayer by Pastor Evelyn Joshua on Sunday, January 2, 2022. For two years, Caroline had been suffering from arthritis. She said it felt as if there were chains all over her limbs. “The Anointing Water was like a sword that cut off all my chains,” testified Caroline last Sunday. As the woman of God prayed for her, Caroline had responded as if an electric surge was passing through her. After the prayer, she was restored to her perfect state of health. Now she can do everything she had been unable to do before, including wearing shoes, touching and washing her knees and moving around unaided. “My third leg has now been discarded,” said Caroline. She advised people to tap into God’s power.