PRAYER IN THE POWER OF THE HOLY SPIRIT - The Synagogue, Church Of All Nations - SCOAN - Prophet T.B. Joshua (General Overseer) Skip to content 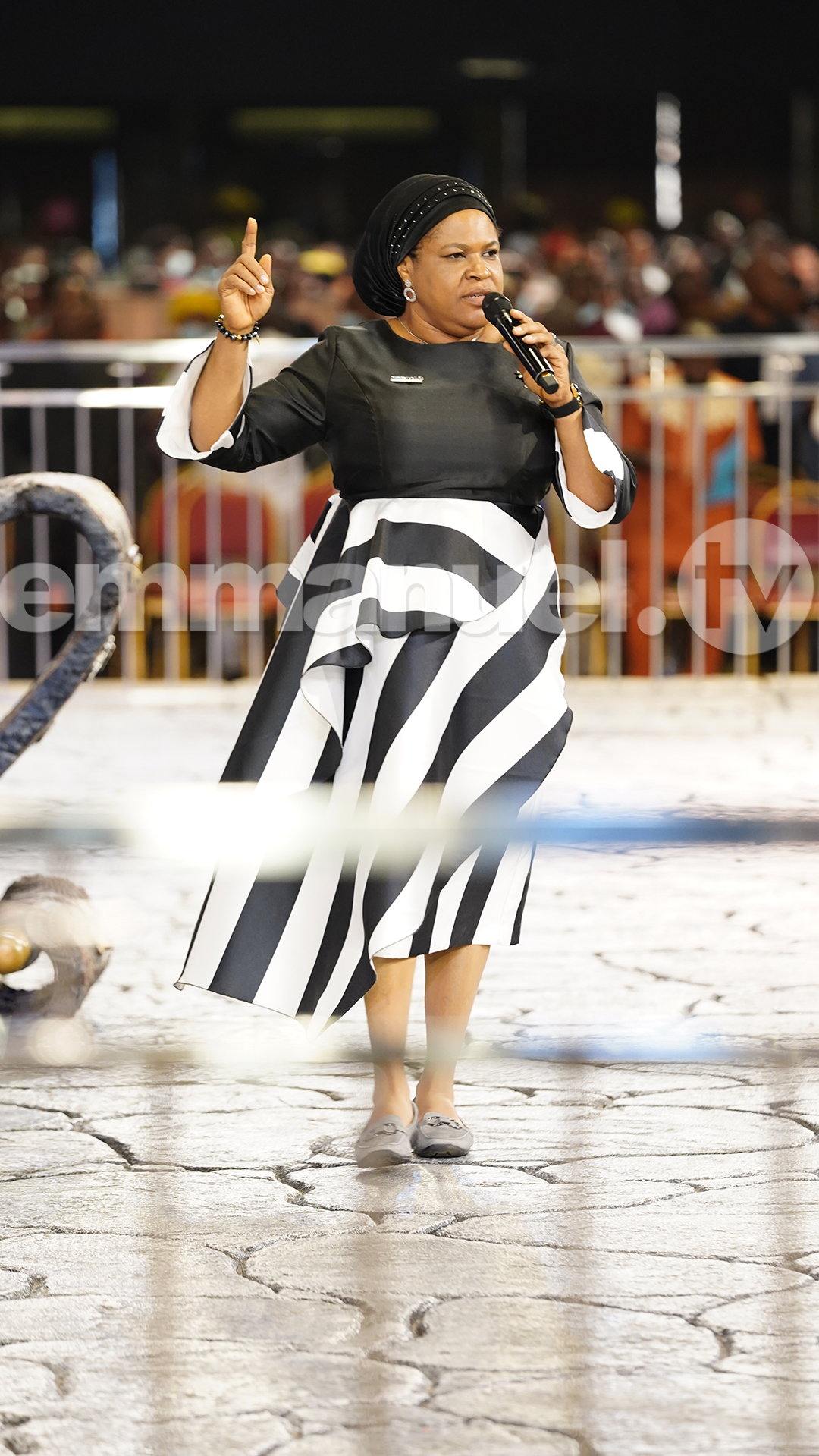 It was a fitting start to 2022 when the first SCOAN Sunday Service for the year dwelt on praying in the power of the Holy Spirit, an issue which God’s servant Prophet T.B. Joshua emphasized all through his ministry, which continues to impact the lives of millions all over the world. The sermon was preceded by a session of soulful worship led by The Emmanuel TV Choir, who had the floor opened for them via an operatic rendition by Esther of The SCOAN Sunday School. As their voices ascended to Heaven in exaltation of the Most High, many of the congregants were struck by the anointing and they began to vomit the impurities in their systems.

Prophet Racine took his proof text for “PRAYER IN THE POWER OF THE HOLY SPIRIT” from Matthew 10:19-21, the passage in which Jesus urges His disciples to rely on the Holy Spirit for directions on how to respond to the persecutors of the Church before whom they would be hauled for proclaiming His name.

Quoting Prophet T.B. Joshua, Prophet Racine said: “Man has the ability to preach, to teach and to pray but the Holy Spirit preaches, teaches and prays as He wills.” He cited the examples of biblical characters such as the Psalmist and Daniel who overcame their foes with prayer. “Prayer changes me and faith causes things to happen,” he asserted to congregants.

Prophet Racine also cited examples of Bible heroes who heard from God through discernment, such as Elijah in 1 Kings 17, Simeon Peter in Acts 10 and Ananias of Damascus in Acts 9—all of whom received divine instruction to do things that sense knowledge would have forbidden. Being able to discern God’s voice, Prophet Racine added, is a key part of the walk with Him, hence the instruction to young Samuel in 1 Samuel 3.

Again quoting Prophet T.B. Joshua, Prophet Racine said: “Prayer is not saying words but praying the prayer.” He explained that “the power and authority of prayer is not in the language – the words we say – but in the breath of the inner man, for your heart is the prayer room.” Teaching further, Prophet Racine said: “God does not need our words to move Him into action. God has His own way of implementing His will in the universe.” As such, we must pray only according to God’s will, which is revealed through the Holy Spirit, who is our Guide and Helper. Prophet Racine added, “He opens our eyes to the promises of God and He helps us to receive them by faith.”

Prophet Racine noted the major lessons from the examples of those who heard from God: (i) knowing how God speaks to us, that is, through His Word by His Spirit and (ii) how to recognise God’s voice, that is, through constant mediation on the Word which leads to deeper understanding of God and oneself.

Prophet Racine also listed four principles guiding prayer in the power of the Holy Spirit. According to him, these are as follows: (i) cultivating a relationship with the Holy Spirit and allowing Him to determine how we should pray and what we should pray for; (ii) understanding the inbuilt nature of prayer; (iii) having spiritual alertness; (iv) allowing for God’s will in the matter over which we have prayed. In concluding, Prophet Racine noted: “Every true believer who worships, prays in Spirit and in truth must be under the check and control of the Holy Spirit. He is our Guide, He is our Wisdom.”

Once again, God’s fearsome power manifested in the New Anointing Water as diverse ailments and contrary spirits were flushed out of the people’s lives. They vomited blood and other poisonous substances as the power of the Holy Spirit impacted them. In one of the cases, a woman shed tears of joy as her husband received instant healing from liver and kidney problems. Upon being ministered with the water by the woman of God, the man began to feel the need to vomit. Once he got on his knees, torrents of liquid started to gush out from his mouth; it was as if a mighty sack of water had just been ruptured right inside the pit of his stomach! Who else could have done this? Only Jesus Christ—and to Him be all the praise!

During the ministration by the evangelists, numerous members of the congregation also received their healing and deliverance as the things that were not of God were cast out of their lives. Praise be to God, for His mercy endures forever!

For the glory of God, more people received their healing, deliverance and breakthrough for the salvation of their souls during the Mass Prayer session. The session was led by Prophet Racine, Pastor Evelyn Joshua and Evangelist Chisom. There was also a Mass Prayer clip of Prophet T.B. Joshua.

Prophet Racine prayed: “Whatever seed that is not planted by Jesus Christ –be removed! “Every demon operating in your life—come out, in the name of Jesus Christ!”

Evangelist Chisom prayed: “Whatever setback satan mighty have used to connect you to himself—be disconnected, in Jesus’ name!”

Pastor Evelyn Joshua prayed: “Begin to command out every trouble in your life, in the mighty name of Jesus Christ! Distance is not a barrier. Wherever you are right now, begin to command deliverance to your life!”

Prophet T.B. Joshua prayed: “Whatever barrier between your heart and the Spirit of God—be removed, in the name of Jesus!”

“That Night I Slept Like A Baby,” Says Man Healed Of Difficulty In Walking

With his body burdened by pain from lumbar spondylosis, Friday from Ebonyi State had nowhere else to turn to but God as he made his way to church the day after Christmas. He was suffering from difficulty in walking as one of the results of lumbar spondylosis. During the ministration of the New Anointing Water by Pastor Evelyn Joshua, God met Friday at the point of his need. “The problem actually started in 2003, when I had a motoring accident in which someone died,” he began his testimony last Sunday. After the accident, Friday knew something had gone wrong when he began to feel discomfort in his body anytime he was riding on a rough road. However, it wasn’t until 2006 when doctors finally confirmed there was a problem. The situation worsened last year when Friday began to feel excruciating pains. Eventually he presented himself for prayers and God’s power set him free forever. Speaking on his experience after he received prayer, Friday said, “That night I slept like a baby.” Now he can do the things he had been unable to do before. “All you need is your faith to put a demand on the anointing here,” he advised the church and viewers all over the world.

“Be healed, in the mighty name of Jesus Christ!” declared Pastor Evelyn Joshua as she prayerfully ministered the New Anointing Water on Anthonia during the service of December 26, 2021. For four years, India-based Anthonia, a Nigerian, had suffered from spinal cord damage. While testifying last Sunday, she disclosed that the problem had started the day after the family found a bird on the balcony of their apartment. Doctors later advised her to have surgery, although they warned her of the risk. Anthonia had initially declined the surgery but later agreed to have it after she started following testimonies of God’s work on Emmanuel TV. Despite the surgery, however, Anthonia’s pains hardly eased and she had to get a walking stick. Not satisfied with her state of health, she requested that her husband bring her to The SCOAN. To the glory of God, her faith made her whole and she is now able to walk by herself. Her husband confirmed the testimony, even as he advised people to ignore the discouraging words from doubters. Like his father, Anthonia’s son Samuel confirmed the healing while thanking God for all the things his mother can now do. Anthonia advised people to wait patiently on God.

It was on Saturday, April 17, 2021 when Gloria received a touch from God’s servant Prophet T.B. Joshua during The Partners Meeting. She had come with the problem of severe tooth pain that made it impossible for her to chew food, thus forcing her to take only liquids. Because of this problem, Gloria usually found it difficult to eat out of the home, leading some of her friends to misunderstand her. Immediately after the touch that Saturday, however, Gloria had vomited the root cause of her problem. As proof of her healing, she ate up the bowl of food offered to her right there at The SCOAN Prayer Mountain. Since then, she has been chewing freely for the glory of God! She advised people to wait for God’s perfect time in healing them.

Victoria was another recipient of prayer during the service of December 26, 2021. She had come with the problem of difficulty in walking. After ministration of the New Anointing Water by Pastor Evelyn Joshua, Victoria received instant healing in the mighty name of Jesus Christ. She advised people to keep on praying to God for His touch in their lives.

Last Sunday was a time of heartfelt jubilation for the family of 67-year-old Margaret as she received instant healing from four years of inability to walk due to lumbar spondylosis. The problem had been so severe that Margaret’s legs used to vibrate and she always needed support on the bed in order to ease the pain. In trying to provide relief for Margaret, her family had taken her to different doctors who gave her numerous medications that eventually led to gastritis. In the course of seeking a solution to her problem, Margaret virtually ran her business aground as she kept dipping hands into her capital. Moreover, her children had to take turns caring for her, given her helplessness. Undaunted, she kept following Emmanuel TV, believing she would one day get her healing. To the glory of God, that healing happened on December 26, 2021 after she received ministration of the New Anointing Water while seated in the car that brought her to church. Describing her experience, she said, “I felt cold all over my body.” She added, “Then my legs began to click into place.” Gingerly, she began to take baby steps again. Since then, Margaret has been moving unaided and no longer relies on a cocktail of drugs. Moreover, she can now eat proper food instead of the biscuits she had been used to in the past four years. Her children joined her in thanking God for the healing, as it has brought an end to their exertions on her behalf. The children advised people to wait for their own time for healing. “Faith, hope and perseverance are all you need,” advised Margaret herself during her testimony last Sunday. One of Margaret’s children also shared her own testimony of healing from internal heat and chronic headaches after receiving ministration of the New Anointing Water. Glory be to God!