YOUR OWN PART AS A CHRISTIAN - The Synagogue, Church Of All Nations - SCOAN - Prophet T.B. Joshua (General Overseer) Skip to content 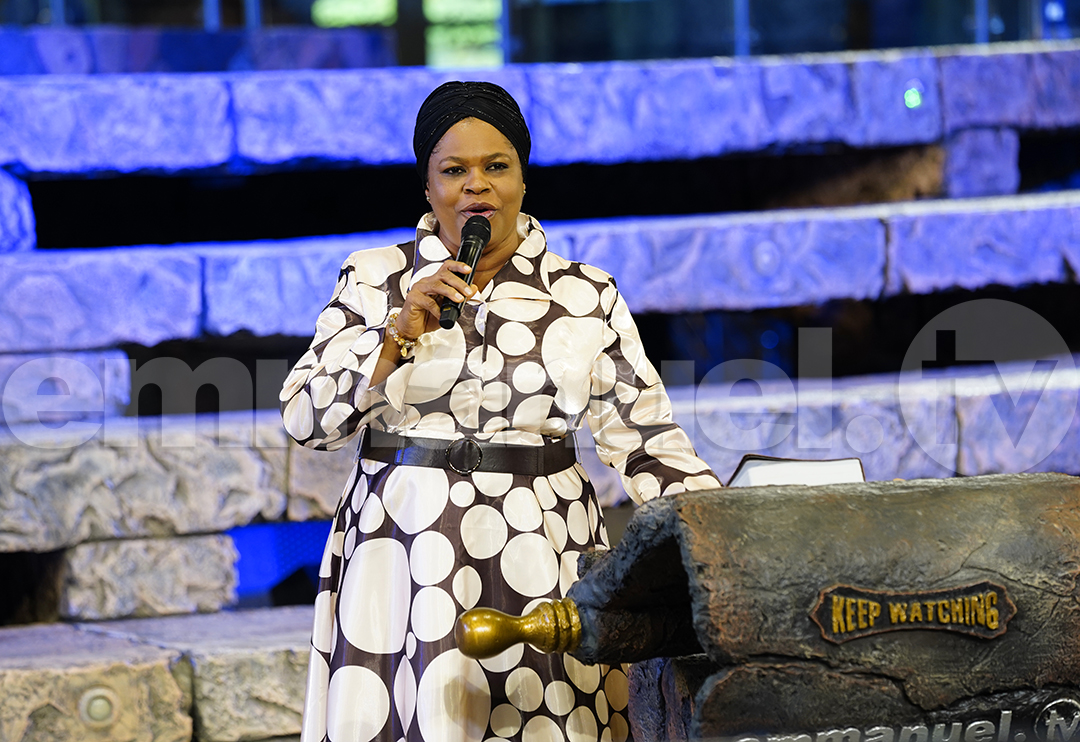 On Sunday, December 12, 2021, The SCOAN Live Sunday Service began with a rendition of praise and worship songs as led by The Emmanuel TV Choir. As they sang, “There is darkness everywhere/I’m in the world but not a part of it/Let Your Spirit lighten the Word/In my heart,” the Holy Spirit descended into the midst of the people to begin the manifestation of signs and wonders.

She then announced the title of her sermon as “Your Own Part As A Christian”, taking her proof text from John 11:22 but starting the reading from verse 17. Given that the passage is about Martha’s expression of faith when Jesus appeared on the scene after Lazarus had been dead and buried a few days back, Mrs Evelyn Joshua assured congregants that they would receive whatever they asked of God. “Everything we do is of grace,” she reminded the church, “so that no man should boast.”

“As people of grace,” she continued, “you must know there are two dimensions to life, just as there are two sides to a coin.” After illustrating her point with coins that she had collected from across the world during her travels, Mrs Evelyn Joshua told the congregants that the two parts in question are the role to be played by God and the role to be played by the person seeking to receive from God (Matthew 6:33). She stated that these roles never conflict and that Christians have an obligation of obeying God’s command. She said, “Obeying God at first seems difficult until we come to see, come to realise that all He asks from us is for our good—that makes life full and free.”

Noting that “changing from our old way of life is hard even if it does not benefit us anymore,” Mrs Evelyn Joshua urged congregants to embrace salvation, for the fear of God is the beginning of wisdom and a new life. She added, “The way of obedience is the way of blessing.” And as she rounded off the message, she told the church emphatically: “Whatever you want to receive from God, you have a role to play. God cannot come down from Heaven to do what you are supposed to do. He cannot do for you what you must do for yourself—playing your role.” She then urged congregants to exercise faith that would break down every wall of hindrance around them at the shout of ‘hallelujah!’

At the Prayer Line ministration, Mrs Evelyn Joshua prayerfully ministered the New Anointing Water on those who had come with various spiritual and bodily needs. To the glory of God, all of these people were impacted by God’s power as the root causes of issues in their lives were flushed out.

One of such people was Richard, who had come with the problem of a swollen belly owing to liver issues. After receiving prayers, the man proceeded to the restroom and expelled blood and other poisonous substances that had been hiding in his body. No doubt, the evidence of Jesus Christ is lives changed.

Mass Prayer: Blessings For All

Similarly, the Mass Prayer session was an opportunity for others to receive a touch from Heaven. As Mrs Evelyn Joshua called for the breaking down of strongholds in the people’s lives, later followed by a clip of one of Prophet T.B. Joshua’s Mass Prayer sessions, many other congregants fell under the anointing and began to break their connection with contrary spirits. Glory be to Jesus Christ!

Earlier in the service, recipients of God’s mercy and favour shared testimonies of their experiences based on ministration of the New Anointing Water.

“Be healed, in the mighty name of Jesus Christ!” prayed Mrs Evelyn Joshua a fortnight ago as she ministered the New Anointing Water on Elizabeth, a Nigerian based in the USA. After developing pain in her right leg in 2017, Elizabeth had visited the hospital where doctors found she had arthritis in her right knee. They then suggested surgery but Elizabeth decided to seek divine help. Owing to endless discomfort from the situation despite taking various painkillers, Elizabeth had to retire early. By 2020, she began planning to visit The SCOAN but the worldwide lockdown measures prevented her from travelling. Eventually, Elizabeth was able to attend The SCOAN Thanksgiving and Reunion Service when the church finally reopened. As the New Anointing Water touched her, she felt heat all over her knee as well as instant ease in her back. Now she can do all the things she had not been able to do before, including bending and walking briskly. She advised people not to give in to satan even when their faith is challenged. “The Spirit of God is still here,” she assured the church.

Beauty from Ghana was also healed of arthritis at the same service. “I used to walk with pain,” she recalled. One morning she had woken up feeling severe pain in her left knee. She then sought medical help but got little or no relief. “I couldn’t do anything,” she said. Her knees always made a noise as she walked. Regarding how she received her healing, Beauty said the Anointing Water felt like lightning in her face as Mrs Evelyn Joshua ministered it on her. She said she had tried to stop the ministration but that the ushers restrained her. Moments later, Beauty said, she heard a distant voice, as if it was an echo, telling her she was free in the mighty name of Jesus Christ. Now she can climb stairs, raise her legs and walk normally. She urged people never to doubt God’s power.

Freed From The Affliction Of Fibroids

In 2018, Blessing from Cameroon underwent surgery for fibroids but was told to prepare for a likely repeat of the surgery. As the doctors had feared, the fibroids returned in 2021 and Blessing at once notified her sister, who had by then received her New Anointing Water. Invited to share in the water by her sister, Blessing decided she wanted to fast in preparation for ministering it prayerfully. However, her sister had immediately organised a prayer session during which she sprayed the water in the air. Just as the mist fell on Blessing, she felt what she described as a ‘push’ and that something had come out of her. She then made for the restroom to check herself and found that the fibroids had started coming out! Thereafter she drank some of the Anointing Water and again felt another ‘push’. To the glory of God, all the fibroids had now come out! She later had a dream in which a black image came out of her. Now she is completely free from pain. She advised people to have faith in God and to wait for God’s time. “God’s time is the best!” she declared.

For the Obasi family, God’s hand of protection was clearly felt last Tuesday when their three children (James, Helen and Faith) were left unharmed during a ghastly accident involving a trailer and the car in which the children had been returning from school. According to Mrs Obasi, the car had been knocked off its lane by the trailer. To the glory of God, there was no oncoming vehicle from the opposite direction and the trailer was able to stop in time and did not crush the car, only shattering its windscreen and denting its bodywork but leaving all the children and the driver safe. During their testimony, the Obasis thanked God for the gift of the New Anointing Water, which they said they minister every morning. They advised people thus: “Don’t joke with your Morning Water or Emmanuel TV. The God of Prophet T.B. Joshua is still alive and He never said goodbye.”

Pastor No More A Victim Of Chronic Ulcer

Pastor Merit from Anambra State had one major petition when she attended The SCOAN Thanksgiving and Reunion Service: divine removal of the affliction of ulcers. As a preacher of the Word, Merit used to have recurrent ulcer attacks but she did not give up her belief in Christ Jesus. It was so bad that she kept losing her pregnancies, including one that was close to term. Her medication came with serious side effects, including rashes and pounding headaches. Because of her condition, she could hardly eat and eventually developed high blood pressure. After repeated visits to the hospital in Benin Republic, a French-speaking West African country where she was based, the doctors advised her to return to her country so that she could eliminate the language barrier and focus better on caring for herself. Eventually, a friend advised her to visit The SCOAN but she could not do so until the church reopened. Glory be to Jesus Christ, Merit received her perfect healing when the New Anointing Water on her during the service. She said it had felt as if someone was driving a screwdriver into the left side of her chest. She then vomited the poisonous substances in her system. Thereafter, she visited the canteen but could only get a malt drink. As a sign of her healing, she felt no discomfort whatsoever after taking the drink. Later, she was able to find food and she ate to her fill. Interestingly, all the foods she ate would normally have caused irritation in her stomach but she never experienced any pain—another confirmation of her divine healing! Later that night, Merit went to bed and for the first time she slept as soundly as a baby! “The God of Prophet T.B. Joshua will solve any problem you have,” she assured the church.