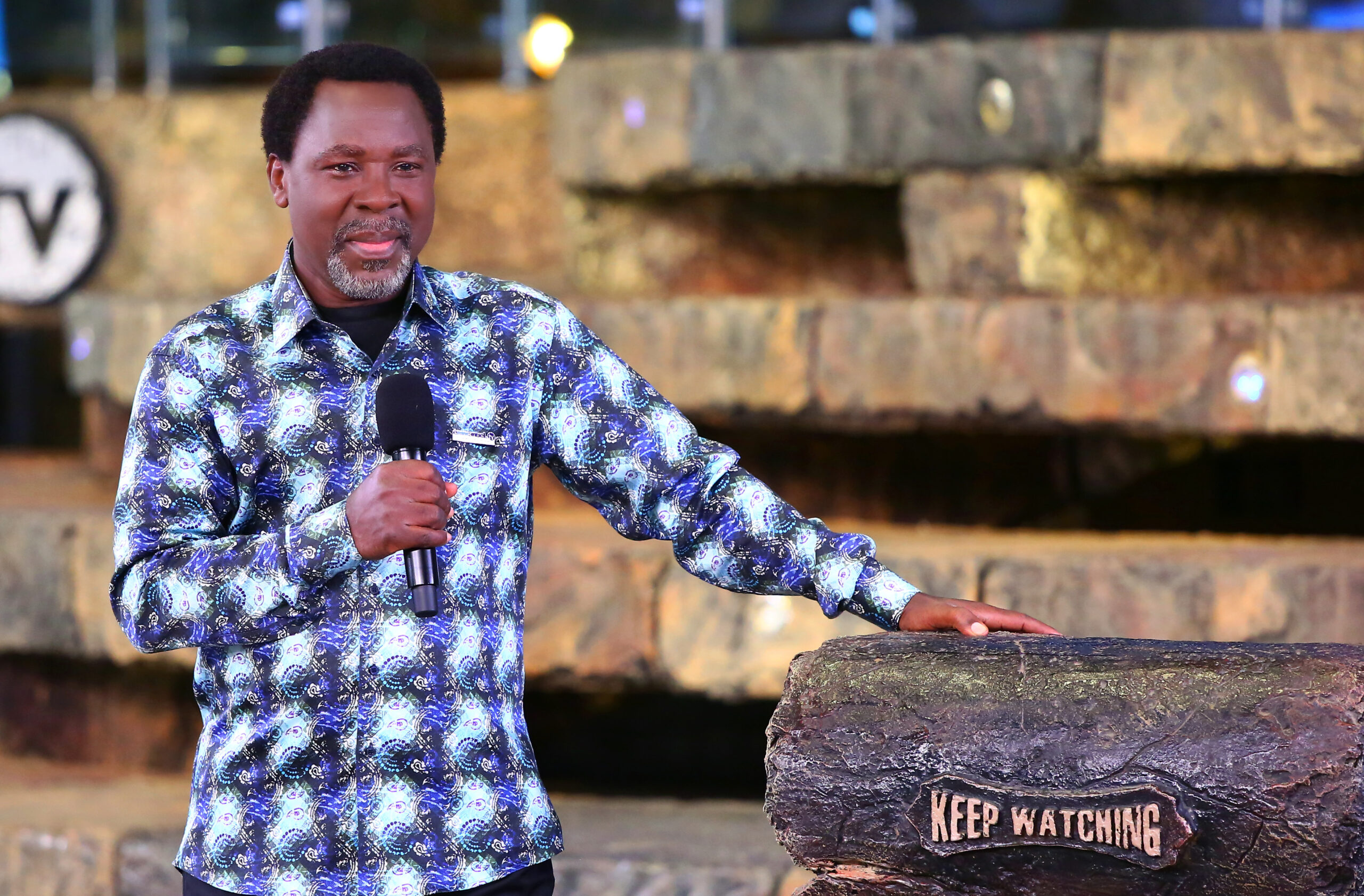 As a good Christian who always obeyed the laws of the land, Prophet T.B. Joshua had in early 2020 announced the closure of The Synagogue, Church Of All Nations (SCOAN) for all live services, following government’s announcement of measures to curb the spread of COVID-19. The man of God had subsequently advised church members and followers of the ministry all over the world to monitor Emmanuel TV for further directions.

After receiving divine intimation on the next step to take, Prophet T.B. Joshua announced the start of online video prayer sessions. Through that medium thousands of people from the four corners of the earth were able to keep with a destiny as they received prayers that set them free from disease and bondage for, ultimately, the salvation of their souls.

Indeed, those prayer sessions, called The Distance Is Not A Barrier Interactive Prayer Sessions, were just another proof of the incredible grace of God on His servant T.B. Joshua and The SCOAN. To be sure, thousands received deliverance after vomiting the destiny-limiting substances in their systems and having the contrary spirits in them expelled—all to the glory of God Almighty!

Thereafter, God’s servant received divine instruction in 2021 to release the New Anointing Water and Sticker to Emmanuel TV Partners and their families and friends all over the world. Thousands received this divine gift either by mail or at designated locations in their countries of residence. In Nigeria, following the easing of the lockdown measures, Prophet T.B. Joshua began a series of intense one-on-one sessions with Partners and their families as they visited The SCOAN Prayer Mountain to receive their New Anointing Water and Sticker and also “a touch from Heaven”.

Until December 5, 2021, however, there had been no Live Sunday Service at The SCOAN since God’s servant heeded the divine instruction to cease physical activities at The Arena Of Liberty. It was therefore a thing of joy for millions all over the world when The SCOAN reopened for a live Sunday service under the guidance of Mrs Evelyn Joshua. The service was an occasion to give thanks to God Almighty on the reopening of the church for physical worship. Being exactly six months since Prophet T.B. Joshua’s transition, the service was also a time to celebrate his worthy legacy of love, compassion and charity founded on unadulterated faith. Indeed, it was an occasion that reunited ‘the five wisemen’ who had received anointing for exploits under Prophet T.B. Joshua many years back: Racine, Harry, John Chi, Daniel and Christopher.

Before giving her message entitled “The Decision Of A Champion”, for which she took her proof text from Luke 22:39-42, Mrs Evelyn Joshua shared her thoughts with the congregation on the significance of the service. “What makes us human,” she began—quoting Prophet T.B. Joshua— “is not our ability to think but our ability to love others.” She reminded congregants that “our gathering here this morning is as it should be by His divine will” after urging them to realise that “we will have to run this race with perseverance.” She also spoke about the man of God’s efforts at sowing seeds in the lives of others, noting that God’s wish is for everyone to multiply and bear fruit in the material world and in God’s Kingdom, no matter the challenges.

Beginning the message proper, which was first given by the man of God, Mrs Evelyn Joshua noted that “champions are not crowned by desiring to be champions but they are crowned because they defeated their enemies.” She illustrated the message with the experience of Jesus Christ as recorded in the proof text, saying Jesus “was willing to go through a season of pain in order to create an eternity of gain.” She continued, “Sometimes you must do something you hate in order to create something you love.” She therefore enjoined congregants to reposition themselves for endurance, greatness and goodness.”

An Offering Of Musical Worship

Dressed in sparkling white robes overlaid with Emmanuel TV-branded blue sashes, the church choir were on hand to offer renditions of different praise and worship songs, as well as special compositions by Prophet T.B. Joshua, especially the iconic “Oluranlowo” and “Sin’s Power Over Me Is Broken”. Their rendition of a South African number particularly delighted worshippers from southern Africa. As the praise offering ascended to Heaven, the Holy Spirit descended into the auditorium and many fell under the power of the anointing.

Award-winning gospel artiste Mike Abdul, a former member of The Emmanuel TV Choir, also took control of the choir stand as he led the church in engaging praise and dance worship. He performed numbers in English and a couple of Nigerian languages, much to the delight of congregants.

Ministration Of The New Anointing Water

At The Prayer Line, the raw power of God was demonstrated as Mrs Joshua ministered the New Anointing Water on those who had come with diverse illnesses and issues. “Thank You, Jesus,” each person exclaimed after feeling the impact of God’s power on their body. Earlier, the woman of God had taken congregants through the history of the Anointing Water, especially the evolution of its packaging over the years. After the woman of God’s ministration of the water, the session continued with three youths who had received direct grooming and mentoring from Prophet T.B. Joshua. Diverse indeed were the manifestations recorded on the day, as many fell under the impact of God’s power in the New Anointing Water. Glory be to Jesus Christ!

On 29th October 2021, as the woman of God, Mrs Evelyn Joshua, led the Mass Prayer session during The SCOAN Praise and Prayer Vigil, one of those in the congregation was Cameroonian Mrs Anastasia Tangeni. For months, she had been suffering excruciating pain from a stomach ulcer. Having sought medical solutions to no avail, Anastasia knew she had no other choice but to take her case to God in prayer. She was therefore delighted when she learned of the upcoming programme. During the vigil in question, Anastasia connected to the Spirit of God as the woman of God uttered prophetic words of healing in Jesus’ name. In no time, she began to feel uneasy and her stomach began to churn, leading to vomiting the root cause of the ulcer in her system. Immediately, she knew that the hand of God had fallen upon her. “I was pouring out blood,” she recalled regarding what happened even after she left the church and returned to her hotel room. Since that day, Anastasia has been eating “like every other person.” She said she has been eating spicy foods and other things she had been unable to eat before her healing. Emmanuel!

For Mrs Rachael Ikeduwa, marriage for the last 10 years had been bereft of its joy owing to the lack of the fruit of the womb. According to her doctors, Rachel stood no chance of conceiving because of the fibroids that had taken over her womb. As such, they asked her to have an operation. Unwilling to have the procedure, Rachael had to endure relentless taunting from unkind neighbours, friends and family members. However, to the glory of God, she came into possession of the New Anointing Water through an Emmanuel TV Partner. After ministration of the water, within two weeks, the Lord proved Himself in Rachael’s life. She had been feeling discomfort and decided to visit the hospital, where her doctor told her she was pregnant! Rachael’s husband confirmed the pregnancy, thanking God for helping him to resist the temptation of going to another woman in order to prove his potency. Like Rachael, he advised people to patiently trust in God Almighty. “He will surely answer you,” he said. On her part Rachael said, “I have my testimony.”

For Samuel Banigo, trouble had begun when he returned from work on a fateful day in August 2019. All of a sudden, he began to feel severe pain in his right foot. After a while, the foot started swelling and he could barely use it. He submitted himself for medical checks and doctors declared him to be suffering from a leg ulcer. In fact, they told him that the foot had been rotting and that he would need to have it amputated. In faith, Samuel decided to minister the New Anointing Water on the foot. After the ministration, pus began to ooze out from the ulcer until it dried up and new flesh began to cover the sore. Before he ministered the water, Samuel’s ulcer sore had been so hideous that one could see his leg bone. As he further ministered the water, Samuel’s healing became perfect and complete, to the amazement of his doctors! “If you have the opportunity to have the New Anointing Water, just know that the presence of God is with you,” he told the church during his testimony today. He therefore advised people to watch out for what God is saying about their situation. Praise the Lord!