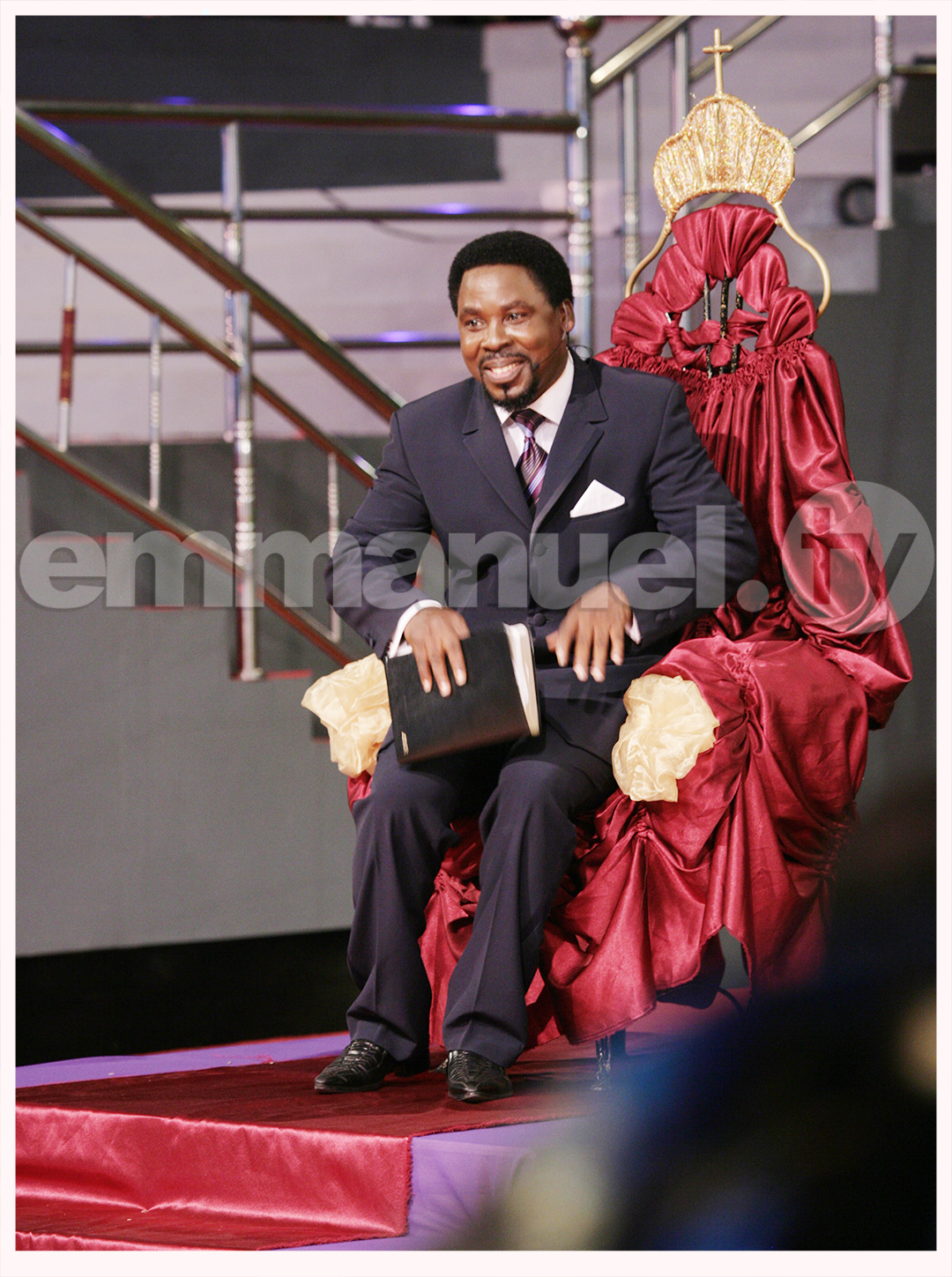 On Sunday, June 1st 2021, Prophet T.B. Joshua gave the third of a four-part sermon entitled “OUR FOCUS”. It was no surprise that God’s anointed servant had deemed it necessary to teach on the topic for four consecutive weeks, given the importance which he himself attached to the idea of maintaining one’s focus not only in the Christian walk but also in every aspect of life.

Because God’s servant understood that reality may sometimes not match our plans and expectations, he reminded congregants on the need to pause and reflect on their current situation. In a tone of patient understanding, therefore, he spoke to them as follows: “What are you experiencing now? If it is contrary to your desires – stop. Take time to change your focus. Pay any price to protect your focus. You are created in the image of the Father. Use every proper means to protect your focus. Conflict is the trap of detraction. Satan uses conflict to break our focus on our assignment.”

The man of God also noted, however, that Moses is worth emulating for displaying active faith. In Prophet T.B. Joshua’s words: “Though Moses was silent, his faith was active. Active faith will make that which is against you to be for you. When you act faith, those that are against you will be for you.” He therefore enjoined Christians to approach God with a genuine heart which submits to the check and conduct of the Holy Spirit. Like Moses, he added, Christians should know how to link the visible and the invisible, that is, the material and the spiritual. “To get above our fears,” he said, “we must remember the more difficult and trying situations God has taken us through in the past.”

Having taught congregants in that manner, Prophet T.B. Joshua shared a personal experience of how God had rescued him in the past and how he continued to rely on Him for future challenges. He invited congregants to watch a short clip of an ordeal he faced in 1996, when he was falsely accused of drug trafficking and was made to spend 13 harrowing days in undeserved detention. As congregants saw in the clip, God’s servant was released unconditionally and written a letter clearing him of all charges.

Describing such an experience as a test which qualifies one for promotion, which in turn qualifies one for a divine reward, God’s servant stated thus: “Uncommon blessing attracts uncommon persecution. Uncommon direction attracts uncommon hatred. Common hatred attracts common persecution. Uncommon things attract uncommon enemies.” On that note, Prophet T.B. Joshua concluded thus: “When we try to overcome our obstacle, we are doing two things: One, we are making history—what people and children yet unborn will read about us; two, fulfilling our destiny, that is, marching towards the throne.”

And God Answered Their Prayers!

At the Prayer Line, Prophet T.B. Joshua prayed thus before ministering healing, deliverance and breakthrough in Jesus’ mighty name: “Father, we thank You! Holy Spirit, we thank You for Your mercy! We thank You for Your favour! Spirit of the living God, fall afresh on us! Enter our soul! Make our heart ready to follow You! Strengthen our desire! Strengthen our determination! Come into our heart and put an end to whatever that is not planted by You! Fill this assembly, Lord, with Your words of truth! Fill us, Lord, with Your words of revelation! In Jesus Christ’s name!”

Diverse contrary spirits fled from the people’s bodies as they received the touch of deliverance in the mighty name of Jesus Christ! Many were also healed of bodily afflictions such as fertility issues, leg ulcers, swollen neck, swollen belly, skin disease and hernias, among others. Glory be to Jesus Christ!

Prophecy As The Mind Of God

For many of the congregants the prophecy session was a time for deliverance, healing and release for breakthrough. For the glory of God, some of the prophecies are presented here.

Gabriel was delivered from the demonic spirit which had continued to torment him even after he gave his life to Jesus Christ while in prison. Gabriel said he had inherited the demon from his father and that it was responsible for causing him to commit the crime that sent him to prison for a year and a half. He promised to serve God in truth and faith.

After a physical description of her person and where she was seated in the church, the man of God asked the next recipient of prophecy to come out. It turned out to be a woman named Bose, who admitted being plagued by bedwetting. God’s servant then laid an anointed hand on her head and she received her perfect deliverance in Jesus’ mighty name. “I will continue to serve my Lord and sin no more,” she promised.

Prophecy also revived the love between Stella and her husband, Larry. “You don’t have any affection for your husband,” God’s servant said, even as he mentioned the controversy over the paternity of a child Larry had had before meeting Stella. Asking Stella to stand by her husband, Prophet T.B. Joshua prayed revival into the marriage in Jesus’ name. The couple promised to improve their relationship with God.

“You should learn how to forgive,” God’s servant told Wilfred regarding the situation with his wife. “This is your second marriage,” he reminded him. Addressing Wilfred’s wife, God’s servant asked her to show understanding about their present financial situation and not walk out of the marriage. He assured her that things would soon change and that the problems were not due to witchcraft. Wilfred and his wife, Oluyemisi, confirmed all the prophecies and promised to keep their hope in God.

God’s servant was emphatic when he prophesied to Mima: “You slept somewhere and the thing caused problems for you. It was only God who saved you—you could have been bathed in acid.” Mima confessed passing the night in a married man’s house, risking being harmed by his wife. She promised to serve God for the rest of her life.

“You have to forgive your wife,” God’s servant told Joseph from Cameroon. “The son is going to give you problems,” he added. Then he laid an anointed hand on Joseph, who later confirmed having issues with a woman with whom he had a son.

Adebimpe was told to desist from his relations with a certain woman who sold food, as the relationship was affecting his spiritual life. He was also told to let go of the money she was owing him. He confirmed the prophecies and promised to sin no more.

“God loves you. You have come a long way. By now you are supposed to be in prison. You are destined to be rich.” Those were some of the words of prophecy for David, who was also told he had to adjust his focus and sort out issues with a woman who had supported him earlier in life. On his averted spell in prison, David narrated two instances which could have landed him in prison. He also spoke about a female family friend with whom he lost contact in 1986. David claimed God’s promise to restore his business fortune and pledged to serve Him all his life.

Mary was told that the waist beads she once used had led to problems in her life. There was also a prophecy about the marital issues which had led to periods of separation from her husband. Confirming the prophecies, she said she had since discarded the beads and would now commit to serving God.

“This man is a friend to many and he is a very, very dangerous man.” Those were God’s servant’s words for Funke regarding a man in her life. Funke confirmed having an affair with a married man but promised to desist henceforth.

Pastor Wilfred, a Sierra Leonean living in Liberia, was told to avoid using fake travel documents. He confirmed losing his international passport to burglars and prayed that God would help him not to impersonate anybody or be impersonated by somebody else.

Canada-based Susan got a prophecy on her son who was in prison over drug charges, having been drawn into it by friends. Susan showed a picture of the said son and asked God to give her the grace to worship Him in truth and Spirit.

Linda from Malawi was healed of the affliction of abnormal menstruation after a word of prophecy located her. Thanking God for her healing from the long-term ailment, she promised to continue serving God.

Pastor Allen from Malawi got a prophecy on his marital issues. He confirmed having emotional conflict with his Tanzanian wife, who he said only restrained herself from fighting him physically because of their engagement in ministry work. “We believe the problem is over,” said Pastor Allen after their deliverance.