AN OUTPOURING OF GOD’S SPIRIT AT THE SCOAN PRAISE AND PRAYER VIGIL - The Synagogue, Church Of All Nations - SCOAN - Prophet T.B. Joshua (General Overseer) Skip to content 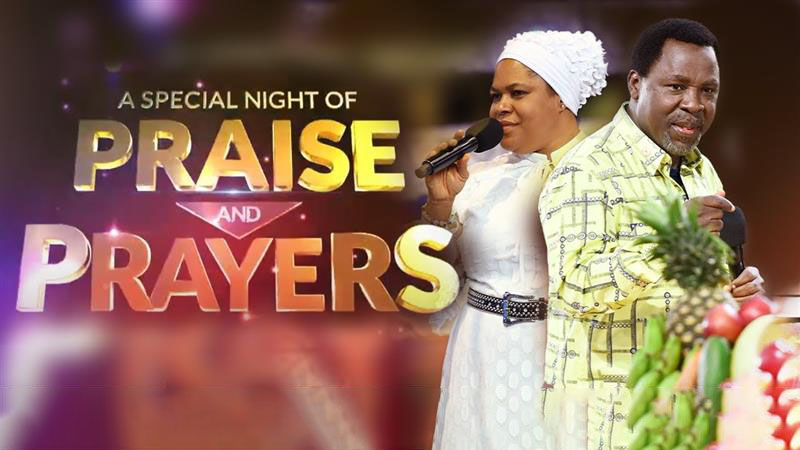 For the hundreds of worshippers who had the opportunity to attend it was a time of heavenly excitement and spiritual uplift as they danced before the Lord during The SCOAN Praise And Prayer Vigil which was held on Friday, October 29, 2011. Indeed, it was clear that the people had been longing for such a time in God’s presence, given how they danced like David did and how they prayed ever so determinedly.

The Emmanuel TV Choir was on hand, as usual, to lead the praise and worship session, reaching deep into their rich repertoire of songs composed by Prophet T.B. Joshua, while also spiritedly rendering a medley of general gospel songs. As they sang, the Spirit of God suffused the atmosphere and all contrary spirits took leave from the people’s bodies.

After the praise and worship session, congregants were treated to a short clip of Prophet T.B. Joshua entitled “Encouraging Words”. The man of God read from Job 29:24—“If I mocked at them, they did not believe it; and the light of my countenance they did not cast down.”  Regarding the reading, he said, “Your identifying with those in need, with those in trouble is precious to them.” Describing doing otherwise as ungodly, he urged congregants to love their enemies even if it seems unreasonable to do so. In his words, “Don’t reject anyone on account of weakness today, because the future is a mystery.” He added, “Someone you reject may be your helper or your strength tomorrow.”

And The Woman Of God Leads The Prayer Session

As those words of prayer rang through the auditorium all contrary spirits in the people’s bodies began to manifest before fleeing in Jesus’ mighty name. Many vomited blood and other poisonous substances in their systems. The woman of God declared: “Whatever be the situation in your life today, in form of sickness, in form of affliction, in form of disease, setback—begin to rise right now, in the mighty name of Jesus Christ! Be healed!”

And as a prayer clip of Prophet T.B. Joshua came on screen, further signs and wonders happened in The Arena Of Liberty, with many expelling the impurities that had been ravaging their bodies. The man of God began: “Hear what God says: Those in darkness—in the name of Jesus, come out!” Praying further, he commanded: “Leave that darkness! When I say darkness, I mean disease, I mean disappointment, I mean failure, I mean setback, I mean barrenness, I mean depression, I mean isolation, I mean the devil, I mean evil spirits. Leave that darkness! Let there be light! In the name of Jesus!”

Two congregants shared instant testimonies of their experiences during The SCOAN Praise and Prayer Vigil. Pastor Anastasia from Cameroon testified about her healing from gastric ulcer which used to cause her constant belching and stomach irritation, just as a young woman from Bayelsa State also testified about her healing from a persistent stomach ailment. Both women had vomited blood and other poisonous substances on the way to their healing.

“God’s promises never change,” Mrs Joshua assured congregants. In closing, she asked them to assert: “I am healed! I am saved! I am delivered! I am linked up with God! Defeat and failure are things of the past! My past is over!”

More testimonies were shared about God’s unfailing mercy in the lives of the people. The testimonies were proof yet again that God’s power manifests in various mediums. While one testifier was impacted as she meditated along the road in front of The SCOAN, the two others received from God through the New Anointing Water, God’s special gift to a troubled world. Here, we present these testimonies so that your faith may be further boosted.

“I Know Something Touched Me!”

While planning her trip to Nigeria to see her children, Zainab, a Sierra Leonean married to a Nigerian, had decided she was going to stop over at The SCOAN to honour the memory of Prophet T.B. Joshua. By the time she was ready for the trip, however, her health was in shambles: she could hardly swallow, her eyes had reddened disturbingly, her nostrils constantly dripped with liquid and she could barely hear—all of which symptoms were accompanied by a severe fever. Although advised against travelling by her doctor, Zainab went ahead with the trip. And as her condition worsened in mid-flight, her fellow travelers became apprehensive and the airline had to seek emergency medical help in Ghana.

After receiving medical attention in Ghana, Zainab proceeded with her trip to Nigeria, where she lodged at a hotel on arrival. Shortly after, her conditioned worsened and hotel staffers had to rush her to hospital. Rejected at the first hospital, Zainab was taken to a second one, where the doctor suggested that she be put on admission after tests again revealed what she had was just malaria. However, Zainab believed that her severe discomfort could not simply be due to malaria. She then insisted that the doctor discharge her after immediate treatment.

The following day, a Sunday, she roused herself in faith and went to The SCOAN hoping to attend service. As there was no service, the security officers advised her to pray in faith along the road in front of the church. And as she moved along in meditation, beholding enlarged pictures of Prophet T.B. Joshua on the sidewalk, Zainab experienced the miraculous and she became whole instantly. She had heard a poof! and her ears had opened up again. “I just received a miracle!” she screamed. “I received a powerful touch from the Holy Ghost!”

With that experience, all of Zainab’s terrible symptoms vanished in the mighty name of Jesus Christ! Now she can swallow normally and hear clearly with both ears. “Continue to have faith,” she advised fellow congregants, even as she added, “Jesus Christ is the same yesterday, today and forever.”

They Shall Mock Her No More, For Her Own Baby Is On The Way!

For five years Justina from Imo State had been seeking the fruit of the womb but all to no avail. The more she tried, the more frustrated she became, even as neighbours and some family members taunted her, very much like the case with Hannah before she had Samuel. Things got so bad that other women would not let their own children stay around her. In desperation Justina sought help anywhere she could, accepting to try various herbal solutions. In the end, the Almighty God had mercy on her after she ministered the New Anointing Water on herself in June. Thanks be to Jesus Christ, Justina is now several months gone and her bundle of joy will soon join the land of the living! Emmanuel!

Adah from Benue State had all but given up on her right foot until God proved Himself in her situation. She had woken up one morning to find her right foot burning with pain. Before she knew it, the foot had swollen and become heavy with pus. After some time the swelling went down, following a burst that left a small scar oozing pus, blood and water. The more doctors treated Adah’s scar, the wider it became and the more hideous the foot looked. All those around Adah began to fear that the foot might have to be amputated. Meanwhile, she could not walk and had to be assisted to do things as simple as using the bathroom.

Around this time—February 2021—Adah’s brother received an invitation to the Emmanuel TV Partners Meeting to collect the New Anointing Water. Having witnessed mighty manifestations of God’s power through the medium of the New Anointing Water, Adah’s brother immediately expressed the belief that his sister had been healed. So he called home and asked her to wait for him. On arriving in Benue, Adah’s brother ministered the water in the mighty name of Jesus Christ, sprinkling some of the water on her foot and some in her mouth. “Right away I felt a cold sensation surge through my body,” Adah recalled. She said she instantly started feeling better and could walk again. Moreover, all of the pus, blood and water later dried up. To show the depth of her gratitude, Adah rolled on the floor in demonstration of her awe at God Almighty’s power.

Brethren, as these people received, so shall you receive in the mighty name of Jesus Christ! Faith is your only link to receiving. Emmanuel!