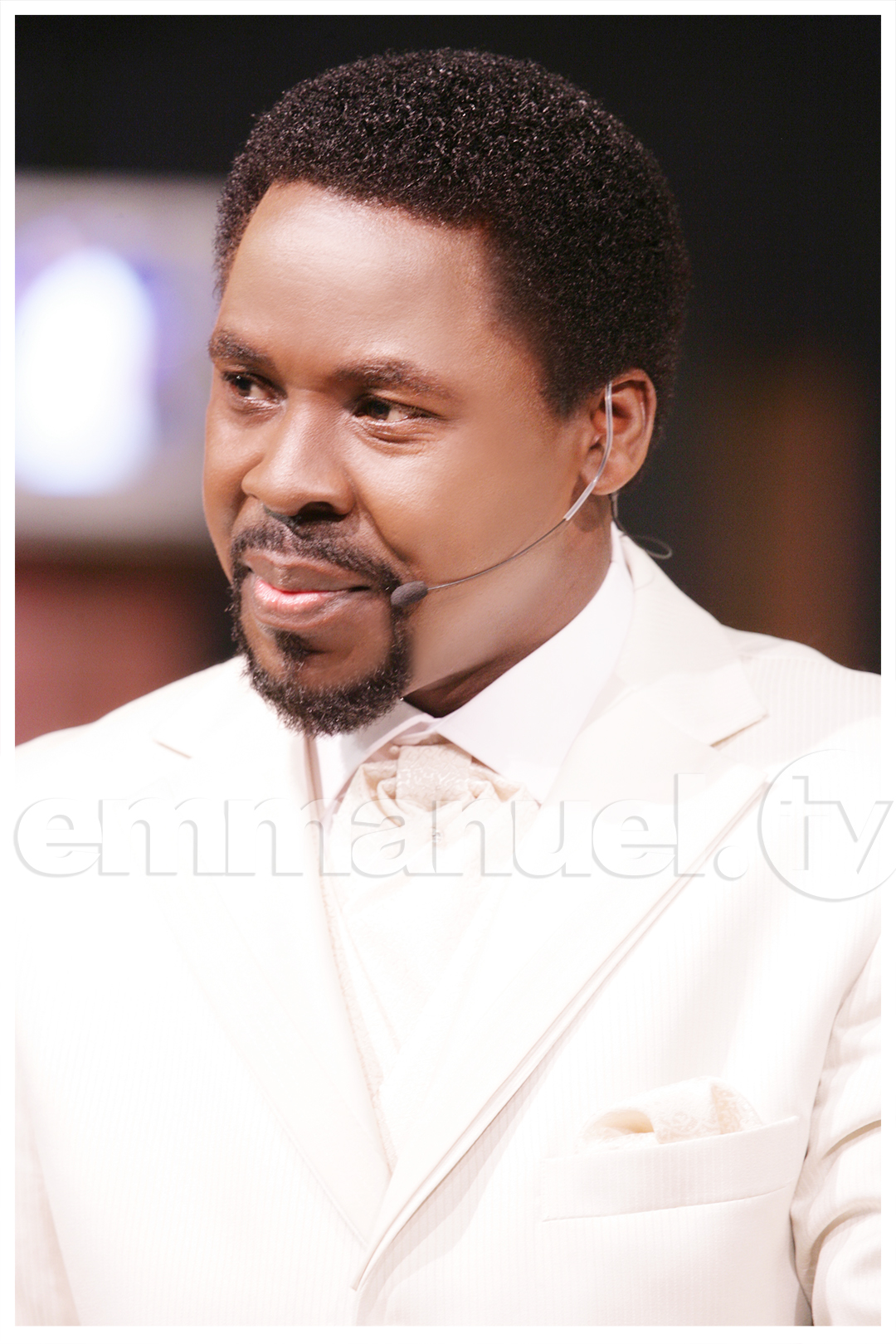 On Sunday, May 18, 2008, the atmosphere at ‘The Arena of Liberty’ was not any different from the usual, but for hundreds who had come from all over Nigeria and the world it was a day of spectacular immersion with the Spirit of God. For that was the day they recorded their own very experience of the raw power of God as it cut through the darkness in their lives, liberating them from satan’s stranglehold.

As was his tradition, Prophet T.B. Joshua began the day’s service by feeding the flock with God’s Word, teaching them on the topic “OUR FOCUS”. He took his reading from James 1-3. The man of God began by telling the people he wanted to boost their faith, thereafter proceeding to urge them to hold onto God’s promises even in the most difficult of times. “We Christians,” he explained, “should focus only on what God has to say about our situation.” When we do so, he continued, we will not feel defeated when “it seems as if the world is coming to an end,” for such critical situations define the true born-again Christian. For emphasis, the man of God added, “The quality of faith is not measured, judged by our attitude to God when the goings are good but when times are hard.”

Against that backdrop, Prophet T.B. Joshua read from Job 2:9-10 and encouraged the church to emulate Job, whose faith remained unshaken despite the untold trials which satan brought his way. He therefore urged Christians to refrain from complaining about their trials, saying: “Anytime you encounter trials, take them as an opportunity for you to honour God before men.” He further said that Christians have a duty to see beyond their obstacles.

For another worthy biblical example on seeing with the eyes of faith rather than with physical eyes, God’s servant cited 2 Kings 6:16, the story of Elisha and his servant when they were surrounded by enemy soldiers. “Elisha’s reaction to the circumstance is instructive to every to every born-again Christian of today,” said Prophet T.B. Joshua. He noted that Elisha was “calm and cool because his focus was on God Almighty.” As such, he continued, “When our focus is on God Almighty alone, we will be calm and determined even when everything around us is unquiet.” In words worth quoting fully, God’s servant told the church: “The clearer sight we have of the power of Heaven, the less we shall fear the trouble of the earth, the less we shall fear the calamities of the earth.” He then assured congregants thus: “Fear not, for those that are with us to protect us, to fight for us are more than those that are against us to destroy us.”

Having made these clarifications, Prophet T.B. Joshua proceeded to the core of his teaching as he asked congregants never to lose sight of their destination no matter their challenges. He said to the church: “However my situation may look like now, it may not dictate my direction because my focus, my desire, my aim is on my destination.” Moreover, the man of God told congregants to draw strength from Psalm 62:5-6, saying: “I depend on Him alone. He alone saves and protects. He is my defender and I shall never be defeated. Because I am walking with the Lord, there is strength in my weakness. God manifests His strength in my weakness, for when I am weak, then I am strong. I am not used to defeat, I am not used to failure, I am not used to poverty, because God manifests His strength in my weakness!”

In his final words for the message, the man of God urged congregants to open their eyes of faith in order to silence their fears and speak in a tone of faith, confidence and finality, even as he declared thus: “If our joy is constant, it shall be permanent!”

When Hundreds Felt The Raw Power of God

Among the hundreds who had their own raw experience of God’s power during the service were congregants who had come with different ailments such as vision problems, difficulty in walking, whitlow, hernia, diabetes, leg ulcers and chest pain. Many had also come with issues of spiritual limitation for which they needed divine breakthrough. To the glory of God, all of these people were met at the points of their needs as Prophet T.B. Joshua prayed in Jesus’ mighty name.

The man of God started by praying thus with the people: “Spirit of the Living God, fall afresh on us. Enter our soul and make our heart ready. Strengthen our desire. Strengthen our determination. Fill our heart, Lord! Establish Your Kingdom in our heart—Your Kingdom of love, humility, patience, in Jesus Christ’s name!” Assured that they had received from God, Prophet T.B. Joshua asked congregants to confess their healing and victory: “Thank You, Lord! I’m redeemed! I’m born-again! Defeat and failure are things of the past! I’m saved!” Thereafter, the man of God laid hands on the sick and suffering, and signs and wonders accompanied every single mention of the all-conquering name of Jesus Christ.

Their Cases Did Not Escape The Anointing

“In all situations, we should ask the Lord to open the eyes of our faith. The opening of our eyes of faith is the silencing of our fears. In the dark, we are bound to be frightened. Satan does not want you to live a life of faith or live by faith, let alone see the other side. Where there is no vision, people perish.” Those were the faith-building, soul-lifting words with which Prophet T.B. Joshua began the Mass Prayer session of The SCOAN Live Sunday Service of May 18, 2008.

When Vision Saved The People

But for the amplitude of vision made available by the Holy Spirit through Prophet T.B. Joshua, the service might have been just another church session without any real impact on the lives of those who were desperately in need of divine intervention. The first person to receive prophecy on the day was Taiwo, who had been battling with an evil spirit. He said someone had tried to give him satanic powers at the home he had just purchased. Despite declining the offer, Taiwo said, the contrary spirit in question persisted in tormenting him. However, God’s servant told him that the prophecy meant a divine solution.

Ogbemudia was identified thus by Prophet T.B. Joshua, “My brother, you have a journey on Tuesday.” Besides telling him other things, God’s servant warned Ogbemudia not to fight over his late sister’s will, noting that she had made her money through an unclean means. Ogbemudia said his late childless sister had made him her next of kin, leading to envy, anger and opposition from his family and his sister’s fiancé, who was holding onto the assets in question.

Paul was told that he had dishonestly converted the property of a late ‘friend’ to his own despite knowing that the late man’s children were in need of help. He was also told that he might soon join the departed man if he didn’t open up to the man’s family about what he had done. God’s servant equally said that Paul had earlier had an accident. Finally, God’s servant said he was willing to help Paul in restoring the property. Paul confirmed all the prophecies and disclosed that he had sustained a fracture in an accident where he was the only survivor. He promised to go and sin no more.

“I want to speak with you about my God,” Prophet T.B. Joshua smilingly told Mehul and his mother, both Hindus. He said the only solution to Mehul’s mother’s ailment was for her to give her life to Jesus Christ. Mehul confirmed the prophecies and said they were ready for salvation.

Jimoney was told to heed his mother’s deathbed advice that he forgive all those who had wronged him, including his son. While confirming the prophecy, he said he was raised by an aunt who had assured him he would be fine as she lay dying. After her death, he said, he had to live with several different people at various times, during which period he was traumatised by the unfair treatment he got. The 65-year-old promised to continue serving God.

There was a prophecy for Grace about her mother who had been wrongfully labelled a witch back home in Zambia, leading to her ill health and unwillingness to carry on living. God’s servant said Grace’s mother’s accusers had offended the Spirit of God, leading to problems in their own lives. Grace thanked God for solving her family’s problems through prophecy.

“Where is your wife? You are lonely.” Those were the words of prophecy for Kayode, who had been thinking of divorcing his wife. Kayode confirmed that he had been doing things he didn’t want to do because of the marital conflict but thanked God for the prophecy.