OUR CONFESSION GIVES US POSSESSION - The Synagogue, Church Of All Nations - SCOAN - Prophet T.B. Joshua (General Overseer) Skip to content 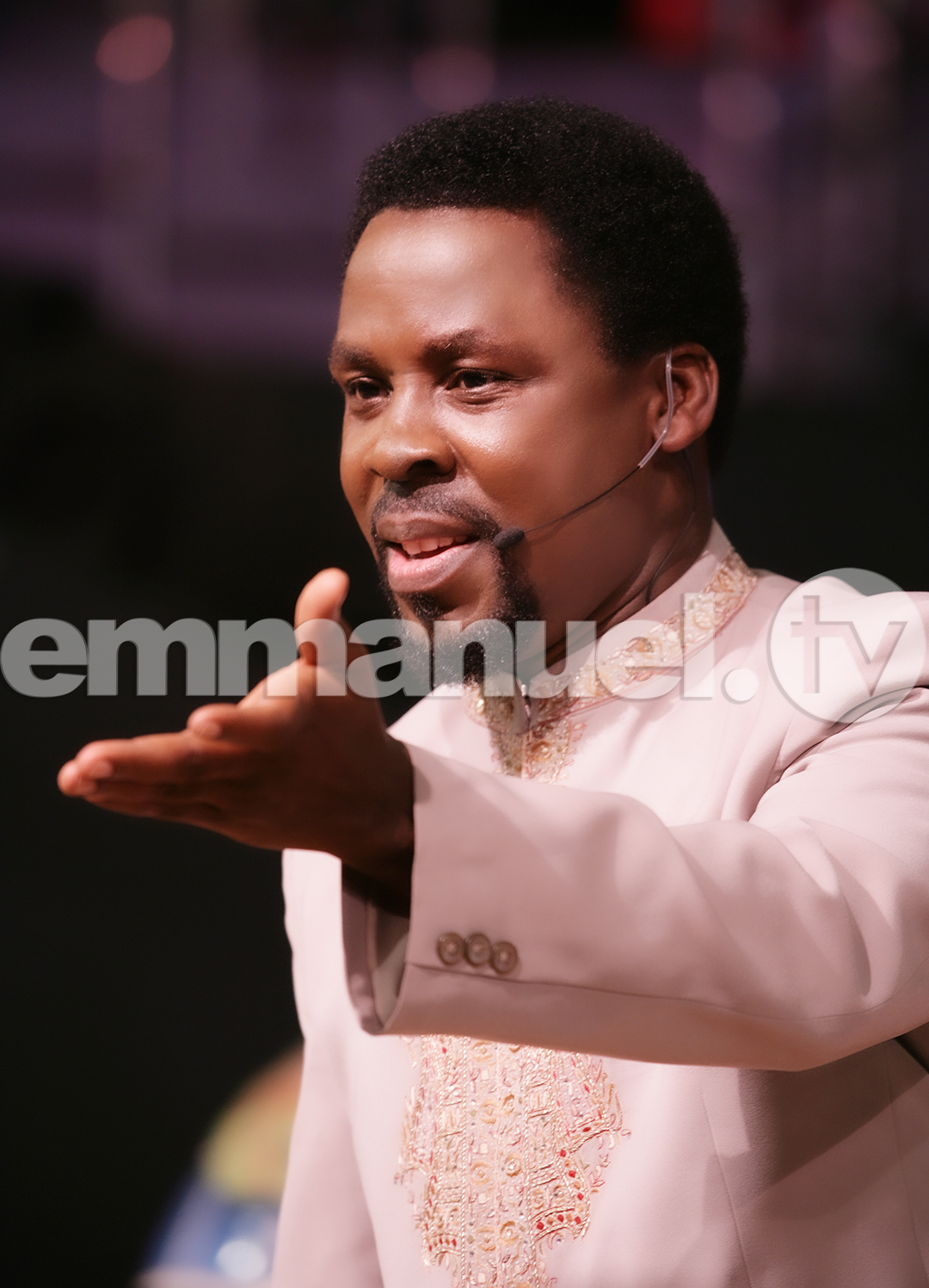 “Has your confession given you possession?” was the question Prophet T.B. Joshua asked congregants on Sunday, May 4, 2008, as he began his sermon “OUR CONFESSION GIVES US POSSESISON”. The proof text for his message was taken from Matthew 21:21: “So Jesus answered and said to them, “Assuredly, I say to you, if you have faith and do not doubt, you will not only do what was done to the fig tree, but also if you say to this mountain, ‘Be removed and be cast into the sea,’ it will be done.”

To further illustrate the kernel of the message, Prophet T.B. Joshua referred to the story of David and Goliath in 1 Samuel 17:46, noting that David had made a prophetic confession of victory before engaging in battle with the Philistine warrior who had been threatening the children of Israel. Therefore, the man of God admonished congregants to be wary of their words, as one cannot live beyond their confession. In his words: “When your declaration comes from faith, your word becomes prophetic. The life you live is as a result of your confession.” To this, he added: “It is a pity many never confess failure but they are living in a failure realm, because their confession is never in harmony with their belief.”

Citing Romans 5:1-2, the man of God observed: “As a child of God, it is natural for you to function in faith as that is the nature of your life,” adding that “Your confession is your faith.” Moreover, he noted that our spirit “always responds to our confession” and that “It is positive, clear-cut confession that wins.” He again spoke briefly on the case of those who do not confess failure yet find themselves in a “failure realm.” He also remarked: “It is surprising what faith people have in wrong things.” On that point, he reverted to 1 Samuel 17:46 and said, “If your declaration comes from faith, your struggle will make you stronger. If your confession concerning your situation comes from faith, you will embrace victory. If your declaration comes from faith, you will have God’s hand performing all things for you.”

Explaining further, Prophet T.B. Joshua urged congregants to leave all battles to God, for “God will fight for Himself” and those who leave their battles to Him. In his words: “We are tools in the hands of God. If your declaration does not come from God, you will not be able to stand the test of time.”

Finally, Prophet T.B. Joshua charged congregants to use the weapons of testimony and positive confession as articles of faith for confronting difficult situations. In his words: “Whenever you are facing difficult situations as a Christian, remember to use your weapon of testimony and confession – what the Lord has done in the past and what the Lord is able to do in the circumstance.”

The Prayer Of Faith

As congregants received a touch from Heaven, they were instantly liberated from every form of malice in their bodies. Many vomited the poisonous substances in their systems, while others parted ways with their medical devices as they entered a new lease of life in Jesus Christ.

The Power of Mass Prayer

Before starting the Mass Prayer session, Prophet T.B. Joshua shared words of encouragement with the church. He said: “God has given us many promises of miracles, supernatural blessings. Yet, to reach the blessing, there are many giants that require to be conquered. There can be no victory without war. What is yours? There can be no liberty without war. What is yours? Whatever is yours, you have a friend, the Holy Spirit, who can conquer all giants, who can eliminate all giants. Begin to ask your Friend to dispel every giant in your life.”

For viewers all around the world, the man of God prayed thus: “Anywhere you are – receive, in the name of Jesus! Begin to prophesy to yourself – “I am healed; Jesus is my Healer! I’m redeemed; Jesus is my Redeemer! I’m delivered; Jesus is my Deliverer.”

Finally, he prayed for the world at large: “Lord Jesus—peace and unity, comfort where there is pressure and tension, war, crisis! You are the solution! Provide the solution, Lord! Thank You, Lord, for Your protection. In Jesus Christ’s name!”

Prophecy led to deliverance and subsequent transformation for many of the congregants. The first prophecy was for Angela, who was given intimations from the Holy Spirit on the fact of having been disappointed in love and the spiritual attack which led to her baldness. The man of God told her to forgive the man and his family. She confirmed the prophecies and promised to serve God forever.

For Emmanuel, there was a prophecy regarding the trouble in his life owing to the discord between his parents. The man of God said that Emmanuel’s mother was in a position to resolve the situation and that he should not rush into marriage, as God had prepared a Jamaican woman who would be a source of reconciliation in his family. Following the prophecies, Emmanuel promised to stay with God all his life.

In Kennedy’s case, prophecy freed him from the spirit of suicide which had been pursuing his family. “With God,” Kennedy said, “all things are possible,” even as he promised to sin no more, after having tried twice to kill himself.

Kemi was delivered from the spirit of bedwetting after God’s servant prayed thus: “Father, let there be light, in the mighty name of Jesus Christ. From today, I prophesy into your life: ‘There’s nothing like bedwetting anymore!’” And so it happened!

John received a prophecy on a mystical book he had got from Bombay which had affected his mental health. He confirmed prophecy to be true, saying he sought power and went about it in the wrong way. He promised to submit his life fully to God.

Dismissed police officer Ferguson was told that he had done a great evil to an elderly woman and that it had led to problems in his life. Ferguson said he had had an encounter with a woman, after which he began to witness difficulties at work, leading to his dismissal over an issue caused by his boss. He thanked God for revealing his problem to Prophet T.B. Joshua and providing a solution.

The prophecies for Patience were about her first daughter experiencing similar problems to hers and a ghost she had been in a relationship with after meeting him on the beach. She said her daughter had eloped with a man while at university, against her advice. She also confirmed being intimate with a man she had met while selling things on the beach and that the man had vanished thereafter from her life. She promised to sin no more.

A certain man was told not to panic about “the short letter” in his possession. It turned out that the man in question was Eddy, who received instant deliverance in the mighty name of Jesus Christ. Eddy displayed sheets of paper containing the names of his family members surrounded by diabolical incantations, as allegedly written by a potential brother-in-law his family had rejected. Eddy said the prophecy shows that God is alive.

“Don’t lose hope,” the man of God told Willoé, though he noted that two men had already disappointed her. “After you leave here, someone is waiting for you,” he cheered her up in the power of prophecy. He also told her to avoid a certain female friend who could make her return to her former life. “My confession lies in Jesus,” Willoé said after confirming the prophecy about disappointment from men. Philip got a prophecy on the initiation that led to what seemed like epileptic attacks that used to occur in his sleep. He also got a prophecy on the spirit of lust for animals in his younger days. “You have evil power in you,” the man of God told him. After his deliverance, which immediately produced a newness of spirit that made him hug his friend excitedly, Philip confirmed both prophecies and said God had indeed met him at the point of his needs.