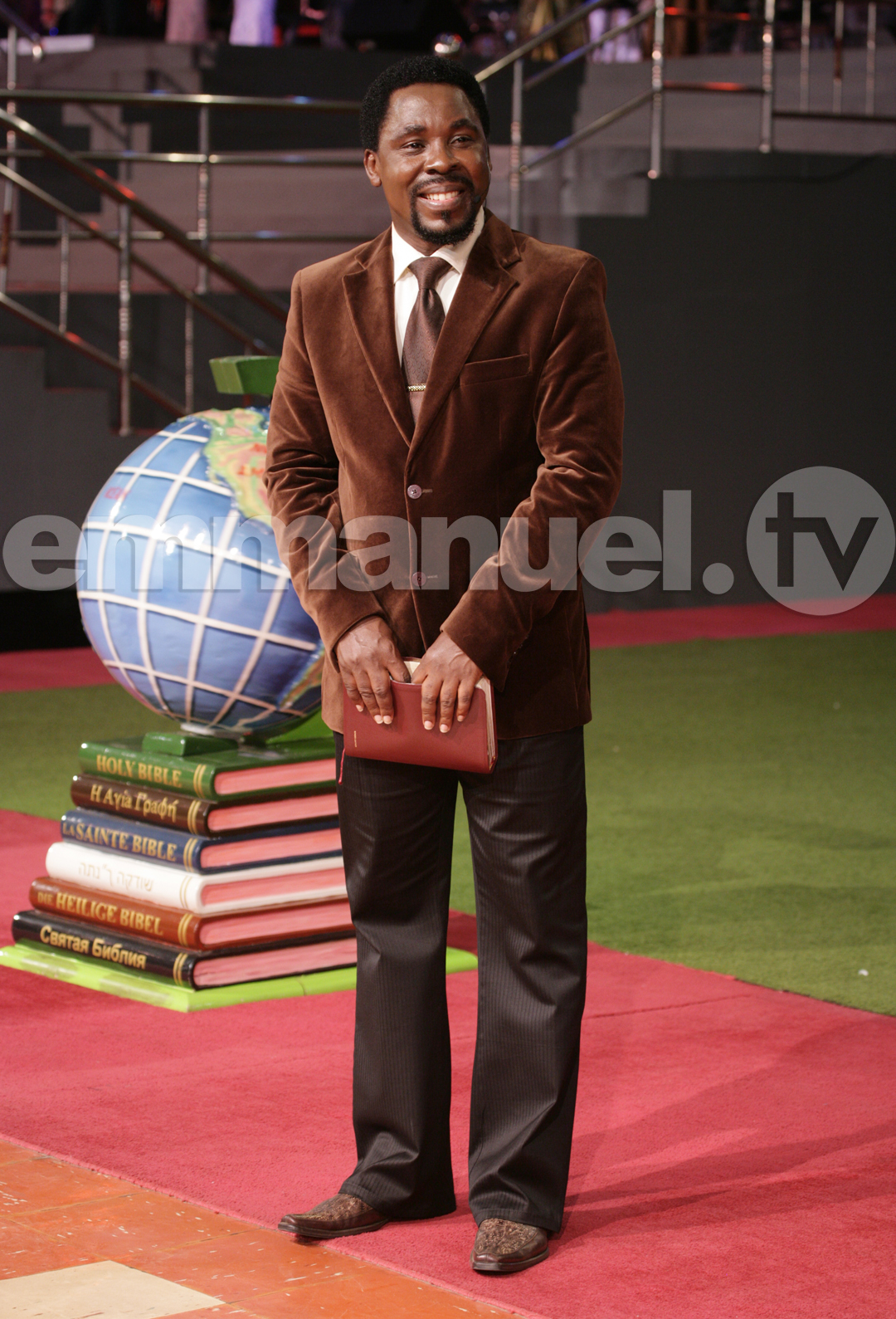 On Sunday, April 27, 2008, the Spirit of God moved wondrously yet again in The SCOAN Auditorium as Prophet T.B. Joshua encouraged the faith of many in his sermon entitled “OUR CONFESSION”.

The man of God took the proof text for his message from Hebrews 3:1-4. Before the reading, however, he reassured congregants of God’s unfailing power, which always protects and guides every Christian who activates their faith. He said to them: “If God is with us, if God is for us, who can be against us? Such should be our confession before our giant.”

Having thus indicated the focus of his sermon, Prophet T.B. Joshua proceeded to refer to Christianity as “the Great Confession,” stating that it all started with Jesus Christ’s very own confession. He observed that “Jesus evidently walked in the light of His confession” and that “He was what He confessed.” Following the example of Jesus Christ, the man of God said that Christians are expected to act on the words of God. “When we act on God’s Word,” he said, “we are acting faith.” He further stated, “When we act on the Word, we are in unison with Him – that is, you and God are lifting the load together; you and God are talking together. He is fellowshipping with you and you are sharing His ability and strength.”

God’s servant described the Christian faith as the confession required of Christians, adding that the confession is about having an attitude of assurance or certainty about what God can do. In his words: “The law of that confession is that I confess I have a thing before I consciously possess it. I confess I have money before I have it. It confesses perfect healing while pain is still in the body.” He referred congregants to Romans 10:9-10, which, he said, “gives the law for entering the household of faith.” He further cited Romans 12:3, noting that “the measure of faith, the words of faith and the spirit of faith” given to every Christian by God certifies their membership in the household of faith. He stressed that “It is natural for us to function in faith because that is the nature of our lives,” and stated that it is impossible to “march with God without faith” as “Only faith pleases Him.”

Using a metaphor of transportation, Prophet T.B. Joshua said, “Our confession builds the road over which faith carries its mighty cargo.” He then added: “In other words, our confession makes way for our faith. You must be in one accord because you are what you confess with your lips and what you believe in your heart. What you confess, you possess, as a Christian. I confess Jesus is my Lord and Saviour, so I possess salvation.”

Consequently, Prophet T.B. Joshua warned congregants against failing to let their confessions match the true state of their heart. According to the man of God: “The management of our heart and its thoughts is fundamental to our faith. How do you manage your heart? You are what you confess with your mouth and what you believe in your heart. You will never live above your confession.” Reiterating the essence of the sermon, Prophet T.B. Joshua said: “Our daily conversation is the great confession. We confess Christ before the world. We confess the fullness of His grace. We confess the integrity of the revelation. When we confess his Word, He watches over it to make it good. When we confess our freedom that the Son has made us free, God will make that confession a reality.”

In conclusion, the man of God reiterated the protective nature of faith confession that is in line with faith action: “When you have God’s armour, satan cannot near you until that armour is lost. Satan’s armour is powerless in the face of God’s armour and power.”

Faith Activation At The Prayer Line

Hundreds of congregants received answers to their petitions to God during the ministration of healing and deliverance at The SCOAN Prayer Line. Before starting the ministration, the man of God assured the children of God that no enemy action could succeed against them. He told them: “There is no need God cannot meet. There is no need that is greater than God.” He then asked them to declare thus: “I cannot be conquered because God is for me! Trouble may test me, trial may test me; they cannot destroy me! I cannot be conquered!” On the power in the name of Jesus Christ, he said: “The name Jesus performs wonders, miracles not by repeating that name as a charm but by believing in it as a divine grace. Miracles are wrought, miracles are performed not by repeating the name Jesus but by believing in it as a divine revelation.”

A Harvest Of Prophetic Solutions

The prophecy session was indeed a time of liberation for many congregants as the Holy Spirit identified the issues in their lives. It was revealed that Edo, a cult member, had an evil garment he used to wear anytime his cult needed to engage in arson, killing, maiming, destruction and stealing. After getting the prophecy, Edo pledged commitment to Jesus Christ.

Jide had received an unexpected retirement letter from the Nigerian Army but he had not told anybody about it when he came to church that Sunday. To the glory of God, however, the Holy Spirit revealed, through Prophet T.B. Joshua, that he had a letter which seemed to contain bad news but that he should view it as something good, because God was preparing him for bigger opportunities. He was told to bear the temporary hardship that would come before he moved a step ahead in life. “I’m seeing you as a leader,” Prophet T.B. Joshua assured him. He promised God, “I will watch myself and guard against sin.”

Asemota was delivered from the spirit of bedwetting after a prophecy located him amidst the congregation. “I’m more like a pale shadow of my real self,” he said regarding the problems the affliction had caused in all areas of life. He then promised to live for God. Asemota later returned to church to testify about his permanent freedom from bedwetting after 15 years of shame.

Prophecy also took away the problems Dora and Femi were experiencing, after the man of God spoke about the intruders causing problems in their marriage. The Nigerian-born Femi promised to henceforth show more love to his Motswana wife of 11 years, who had borne him three children.

Lizette from South Africa received prophecies on the disappointment in her life, the loss of her previous husbands and an issue in her heart, as well as on her spinal cord and her decision to keep to herself. Grateful to God for the prophecies, she said she would live her life for Jesus.

Nkhensani from South Africa received a prophecy on the serpent spirit disturbing her life. The man of God also described her as a ‘man’, before praying for her in the mighty name of Jesus Christ. Having regained her freedom from the contrary spirit troubling her life, she promised to go and sin no more.

For The Salvation Of Souls