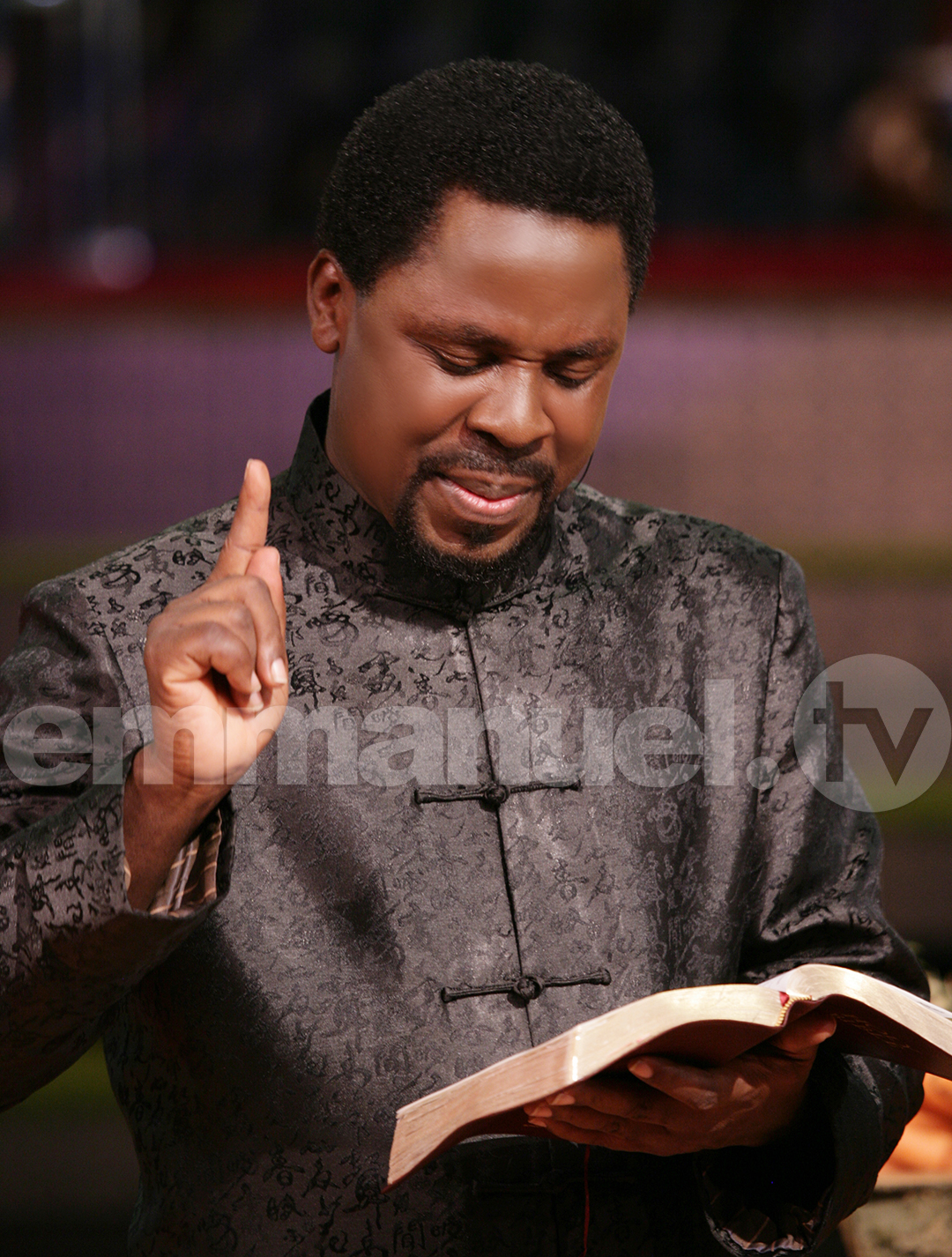 When Prophet T.B. Joshua joined congregants in The SCOAN Auditorium to deliver his message on Sunday, April 13, 2008, it was an expectant people of God who received him. On that day, God’s servant continued his lifelong mission of sharing the message of faith and salvation with the world in a message titled, “FAITH CONFESSION”.

Prophet T.B. Joshua began by reading from Galatians 3:14, noting how our confession as believers affords us possession of God’s promises. He later remarked: “After reading the Book of Galatians, I came to understand that God’s title for us is ‘believer’.” Continuing on a personal note, the man of God told the church: “If God’s title for me is ‘believer’, it means it is natural for me to function in faith, that is, it is normal for me to function in faith because that is the nature of my life.” Sharing his understanding of faith, he stated: “Faith is not a product of the reasoning faculties but of the recreated spirit.” In his explanation, he mentioned that the nature of faith with which we are concerned is that “in the finished works of our Lord Jesus Christ.”

After citing Romans 12, the man of God encouraged worshippers to view faith as a personal possession, stating as follows: “Only faith pleases God. If you have your own faith just as you have your own shoes – and that is the only thing that pleases Him – this means you have constant access to Him.” Having made that point, God’s servant exhorted the church to constantly exercise their God-given measure of faith and avoid focusing on the things that are seen, for a true believer walks by faith, not by sight.

Following this, the man of God highlighted the problem of focusing only on our present situation without considering what God has to say about it. He said the things we consider to be negative are often the very things God uses to work in our lives. In his words: “Sometimes God uses those things to preserve us, to keep us for a new level in life, to strengthen our desire for Him, to prepare us for the challenges ahead, to reform us, to keep us for a new level.”

Given this reality, Prophet T.B. Joshua taught congregants to be mindful of the consequences of living by sense knowledge. “As long as we make decisions with our eyes and ears in the natural,” he told worshippers, “satan has power over us.” He then restated the point that faith “is not a product of the reasoning faculties but of the recreated spirit.” Furthermore, he charged the church thus: “So you should be able to boldly say, ‘I have my own faith. I am a faith man. I am a member of the household of faith’.”

As he was about to bring the message to a close, Prophet T.B. Joshua highlighted how a lack of faith tends to manifest. He said, “We are huge in mind, less in the spirit; fat in mind, thin in the spirit; rich in mind, poor in the spirit.” His final statement to congregants then came in the form of a gentle warning: “Your confession is your present attitude towards the Father.”

A Petition to God During the Mass Prayer

During the Mass Prayer session, Prophet T.B. Joshua led congregants to pray for power over the thoughts of their heart. “Ask Him to discipline your mind so that your mind can become your servant, not your master,” he told them. He continued: “If your mind is not your servant, you cannot focus. You will become a Christian controlled by outward needs. If these things formed the basis of Job’s love to God, Job would stop serving God when his blessing and prosperity were affected.”

The man of God then cited Psalm 51:10 before asking congregants to pray further thus: “Create in me a pure heart and renew a steadfast spirit within me so that I may be able to focus on You alone.” He went on: “Your confession is your present attitude towards the Father. By my confession, I am saved or lost. By my confession, I am weak or strong.”

The Mighty Move Of God At The Prayer Line

Before the prayer ministration, Prophet T.B. Joshua exhorted congregants and prayed with them as follows: “Faith does not ask for possible things. Faith is demanding the impossible, and we live by faith. Faith is demanding the impossible. We first have to acknowledge our weakness because Jesus knows where we were, where we are and where we shall be.” He continued: “Right now, let us acknowledge our weakness. He knows our past, our present and our future. We are undeserving of His grace. Father, we thank You! Holy Spirit, we thank You! Lord, open our heart to Your faith! Open our heart to Your Word! Open our heart to Your Spirit! In Jesus Christ’s name we pray!”

During the Prayer Line ministration, God’s Spirit worked wonders in the people’s lives, setting captives free, bringing healing to ailing bodies and restoring peace to troubled souls. Those who had been unable to walk received instant healing and they praised God so spontaneously that it was obvious they had been convinced about God’s ability to put them over – in other words, to free them from their bodily, mental and emotional burdens. There were also healings for numerous other cases of difficulty in walking, just as there were healings for foot ulcers, slipped discs, fractures, general body pain, internal heat, skin disease, coughing, vision and stomach problems. Indeed, the evidence of Jesus Christ is lives changed!

The Power Of Prophecy

During the service, some members of the congregation received prophecies that set them free from troubles causing them unrest. For Uche, there was a prophecy about the disappointment she had faced on her wedding day, when her bridegroom walked out on her. Uche said that since January 1, 2000, when the incident happened, she had experienced series of heartbreaks from men. Because of the prophecy, however, Uche became more confident about her new life in Jesus Christ. She asserted, “I believe that my future is great and my destiny is bright,” while also stating her determination to serve God for the rest of her life.

“Don’t worry; God will solve your problem.” That was the assurance that Prophet T.B. Joshua gave Ingrid, a woman from Holland, after prophesying about her worries concerning her children. Ingrid said she had been worried because illness had prevented her from caring properly for her children. However, she thanked God for locating her family through the prophecy. “I believe everything will be well,” she said, even as she added that she would henceforth live for God.

“I am the one that has been bedwetting. I have tried different drugs and it has not worked and it’s always embarrassing.” With those words, Kindness confirmed the prophecy about his problem of bedwetting, which he said he had been too ashamed to disclose to anybody. Asked if he knew how he had come about the problem, Kindness said he didn’t know. God’s servant then reminded him of an intimate encounter he had had one night, by 9:00 p.m., with a certain woman, leading to “affairs in the dream.” Kindness said he had no doubt that his problem was now over, especially in the light of the healing he had received the week before. “I’m making a vow to God that I will serve Him more,” he declared.

“You need counselling. Somebody is somewhere disturbing you – there is a man that is disturbing you. And you have a great heart for your loved one – so much. But be careful.” Those words from Prophet T.B. Joshua were for 41-year-old Lidy from Holland. The man of God had said he would not say more than he had already done, explaining that the prophecy was of a private nature. In confirming the prophecy, however, the married Lidy said a certain man, who had wanted her so much, had taken his own life when he couldn’t have her. Lidy thanked God for taking care of her via the prophecy.