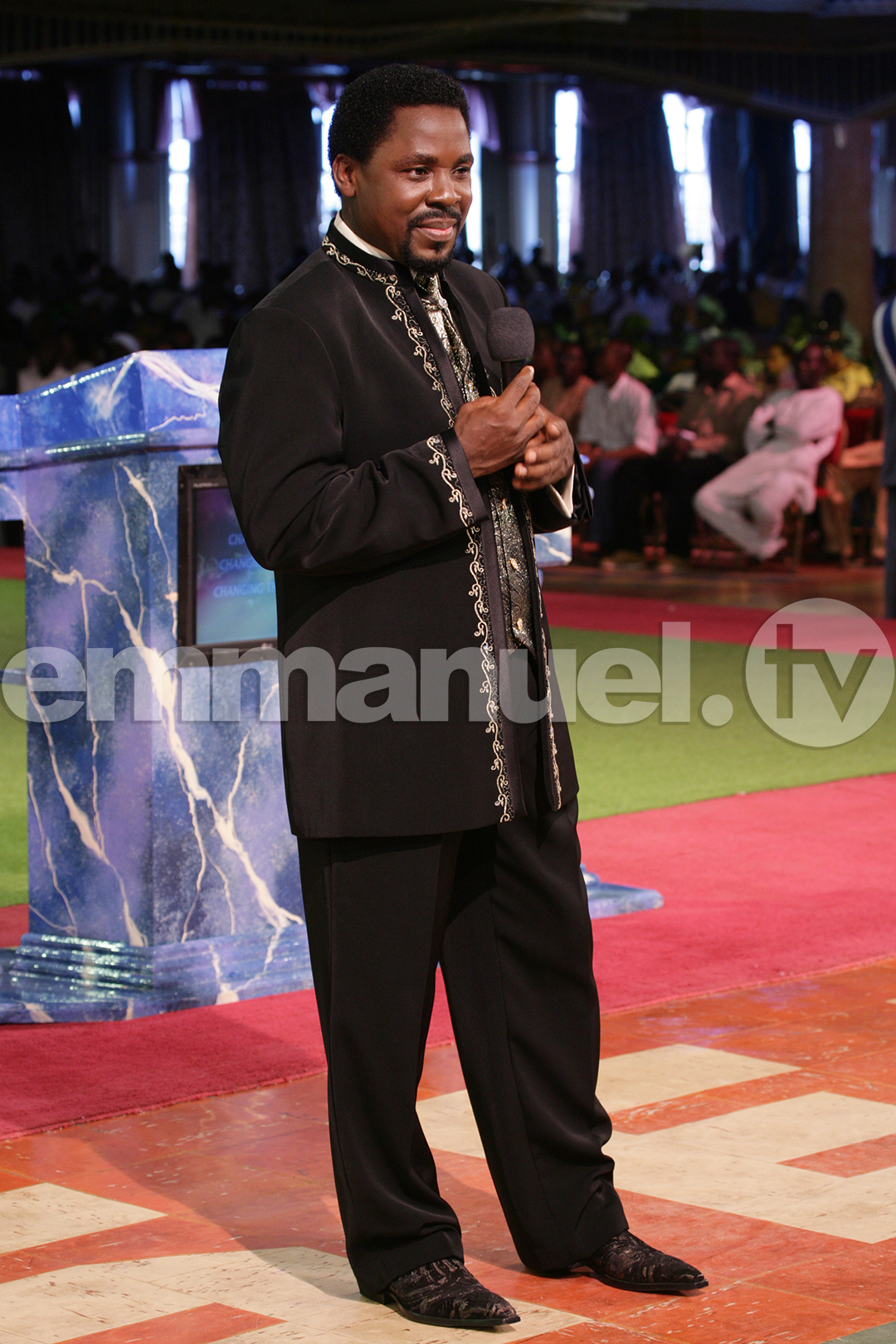 On Sunday, April 6, 2008, when he gave the concluding part of the message “STAY IN FAITH”, Prophet T.B. Joshua had begun with words of reassurance to congregants, telling them: “Seeing only what God says will produce and increase our faith. No matter the situation you are in, no matter the situation you are passing through, if God is with you, He will comfort you.” For the sermon’s proof text, God’s servant read from Romans 5:1-3, and throughout the ministration it was clear to the church that his words were those of a child of God who had gone through trials and tribulations that had prepared him to speak convincingly on congregants’ situation in their own walk of faith. For example, after reading the proof text, he stressed the inevitable role played by divine intervention, which crowns all human effort, saying: “After you must have done everything possible, you still need to leave it for God. After you have laboured, worked hard, you still need to leave it for God to mark.”

Explaining what he meant, Prophet T.B. Joshua said it is normal for Christians to witness both good and bad times even when they live by faith and not sight. As such, he said, a Christian should not feel neglected by God when faced with some of the unpleasant situations of life, such as illness, disappointment or poverty, since God often uses such circumstances to prepare him or her for the fulfilment of their destiny. In his words, “Your own poverty may be to preserve you, it may be to keep you for a new level, it may be to reform you for a better position, it may be to strengthen your desire for God.” He therefore urged congregants to learn to cut satan to size by ignoring his tricks of diversion and taking advantage of “our union with Christ in the Spirit.”

However, God’s servant added, the Christian’s union with Christ in the Spirit can only happen if it is founded on God’s Word, which is the ultimate activator of faith. He told the church: “Every time you speak words of faith, you hear yourself and God hears you. On the contrary, when you do not speak the words of faith, you hear yourself; God does not hear you.” That being so, he continued, not speaking the words of faith will lead to trying to invoke the name ‘Jesus Christ’ merely as a spell or charm. On that note, he cited the example of David in 1 Samuel 17:45-end, who had not only confronted Goliath in faith but had also spoken words of faith during the encounter. “God has given to every Christian the measure of faith,” Prophet T.B. Joshua noted, even as he added: “When you talk with your mouth what you do not believe in your heart, your words will remain idle, meaningless and oftentimes destructive.”

Reading from Romans 12:12 and offering a personal illustration of what it means to always activate faith in Christ Jesus, God’s servant said: “As a result of having my own faith life, I have instant access to God; I can contact Him. If you are truly a Christian, you have the same grace.” Furthermore, he read from 1 John 5:4 and invited congregants to confess thus: “I am a faith man because I am a member of the household of faith! God has given to every Christian the measure of faith, the spirit of faith, the words of faith! This is the victory that has overcome the world: my faith!”

To make his point clearer, the man of God told congregants that building their own faith to such a level will keep them from having to depend on others to pray for them. He said: “Once you have this, you can pray to the Father in the name of Jesus and He will hear you. I do not have to look there and here for someone else to pray for me the prayer of faith.” Before closing the message, Prophet T.B. Joshua read from John 16:23 and noted thus: “When you act on God’s Word, you are acting in unison with God, I mean you are lifting the load together. When you lift the load together, you are sharing His strength and ability…. You and He are lifting the load together. He is fellowshipping with you and sharing with you, and you are sharing His ability and power.”

Just as he had done at the start of the sermon, God’s servant ended with yet more words of faith affirmation in the sonship of our Lord Jesus Christ as he asked congregants to declare thus: “I know where I belong! I am a member of the household of faith! I am a faith man! I have faith! Faith is something that I have! God has given every Christian the measure of faith, the words of faith, the spirit of faith! This is the victory that has overcome the world: our faith!”

Thereafter, the man of God prayed in the all-conquering name of Jesus Christ and diverse illnesses vanished from the people’s systems, including skin disease, leg ulcer, swelling of the body, boils, measles, anus cancer and injuries of all sorts. To the glory of God, many also vomited the poisonous substances in their systems.

Words Of Exhortation As Mass Prayer Leaves No One Out!

Prophet T.B. Joshua further exhorted congregants during the Mass Prayer session. He urged them to seek knowledge of God’s will for their lives regardless of their situation. He encouraged them to keep an eye on the goal of making Heaven at last. “Ask Him to open your understanding to know His will concerning whatever you are going through,” he told them to pray. He added: “When you know His position concerning what you are going through now, you’ll fear no more, you’ll worry no more, you’ll complain no more! You just need to know God’s will concerning what you are going through, because you are a member of the household of faith. This Kingdom of God – that is our reward. A Christian controlled by outward needs is no match for satan. If those things formed the basis of Job’s love for God, when those things were taken away, Job’s love would have waxed cold.”

And Prophecies Set Them Free!

It was a spectacular deliverance for Martha, a Nigerian, after she received a prophecy on her grievous experience of rape with violence and evil machination. The man of God had prophesied there was a woman wearing red trousers on a white blouse and that she had been raped by several men, who had dumped her by the roadside after wiping her bloody cuts with a handkerchief which they took away. He said they had first given her water that made her pass out before ritually replacing her real person with a counterfeit after the rape, intending to render her useless in life. He then prayed for her in the mighty name of Jesus Christ. During the prayer, Martha fell on the floor as the anointing struck her. When she recovered, she got up as a transformed woman. She testified after confirming the prophecy: “When the man of God prayed for me, I was delivered. Right now I am feeling very good. I’m OK; I’m comfortable now. I thank God for what He has done – for delivering me and I pray that by His grace I will do His will and I will sin no more.”

“Brother, be careful—don’t attempt operation. The doctor will say you should go for operation—don’t try it. I’m seeing your heart—there’s enlargement…. If you do operation, it will not succeed; Jesus will heal you.” Those were the words of prophecy for Patson from Zambia, who confirmed the Spirit’s intimations from God’s servant. The name of Jesus Christ indeed worked in the Spirit as Prophet T.B. Joshua acted on the authority in the Word to cast out the ailment in Patson’s heart. Confirming the prophecy, Patson said smilingly, “I received deliverance and healing at the same time,” even as he exercised his body for the glory of God.

“There is a woman—the problem you have now is that there’s no affection between you and your husband. This is giving trouble to the house. The problem is not from you but from your husband. Without deliverance … there will be divorce.” As the woman involved, Blessing, came out, she was accompanied by her husband. The man of God then told the husband that, contrary to his assumption, Blessing was not into witchcraft but was just the sort of woman who easily drew male admirers. During the confirmation session, Blessing said there had been no peace in the home in their nine years of marriage, which had produced three children. She said her husband constantly beat her up over accusations of flirting and being behind his problems. She also said her parents had advised her to quit the marriage. Blessing’s husband, Sanni, confirmed beating her up and forcing her to take an oath naked to prove her innocence. After the word of prophecy, however, Sanni asked for his wife’s forgiveness and God’s intervention, promising henceforth to make her the closest person to his heart.

Committed to leading others to Christ, Prophet T.B. Joshua asked congregants to say the prayer of salvation thus: “Lord Jesus, I am a sinner. Come into my heart and wash me with your precious Blood. Save my soul. Be my Father, my Companion, my Friend in life. In Jesus’ name!” Afterwards, he greeted them: “You are welcome to God’s family!”