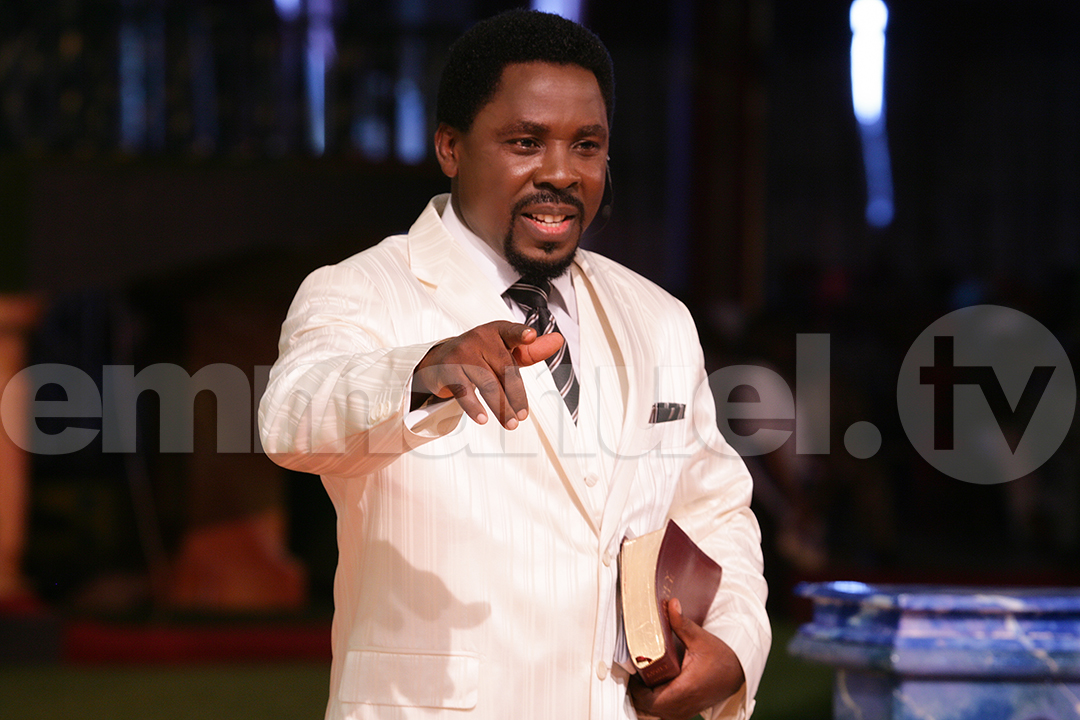 God’s servant took his proof text from Hebrews 11:1, 6, from which he observed that “Faith is the evidence of things not seen.” He likened faith to a seed planted by a farmer, saying the farmer “believes it is growing before seeing it grow.” Speaking further on the topic, he stated that “In Christ Jesus we have a perfect evidence for faith, that is, faith in the finished work of our Lord Jesus Christ.” As such, it is possible for any man or woman, he explained, to get rid of their doubt “by looking steadfastly only at the evidence which God has for us, has for our faith.” He said “Seeing only what God says will produce and increase your faith.” On that note, Prophet T.B. Joshua pointed at the advantages of embracing Christ’s “new order,” which gives peace, protection, action, ability to speak in tongues and power to preach not as the world gives. He spoke similarly on the delightful blessings that come from a look of faith to Christ, which happen to include “life, light, joy, peace, perfect health – in fact, everything!”

Teaching further, God’s servant highlighted the importance of faith as regards our relationship with Christ, saying, “Everything about Him commands our faith.” He stressed the need for faith to be constant and not controlled by feelings, which are inherently unstable as they tend to be largely influenced by our present circumstances. In his words: “Faith in yourself commands feelings. For faith to be constant, it must be based on something with more stability than your feelings.”

On the implication of this knowledge about faith, the man of God noted that the assurance of salvation is not a matter of sense perception but of certainty about God’s promise in His Word. He stated thus: “You are not saved because you feel you are saved. You are saved because you put your faith in God’s Word and acted on it.” Before citing Hebrews 13:8, Prophet T.B. Joshua remarked that God’s Word is the only thing that is “constant” and “regular”. Therefore, the key to a stable relationship with God, he says, is for it to be based on something with more stability – namely, the Word of God.

To illustrate the point further, the man of God read from 2 Corinthians 5:7 and 2 Corinthians 4:18, accentuating the importance of living by faith, as opposed to sight, and recognising that “We live by faith when we recognise our union with Christ in the Spirit.” He mentioned that faith “must be must be controlled by God’s Word, not by what we see, hear, read or what our circumstances look like,” and warned that the Christian whose faith is rooted in their feelings is susceptible to being controlled by satan’s devices.

After reading from Psalm 91:15, Prophet T.B. Joshua assured congregants of the promise of God’s unfailing presence in times of difficulty. He then urged them to “stop focusing on the things that are seen” but to instead “focus on what God says about them.” Therefore, Christians should not focus on their present situation but accept that God always has a purpose for whatever He allows in their lives. With this in mind, God’s servant continued thus: “The situation you are in may be to preserve you for redemption. The situation you are in now may be to strengthen your desire for God, and one’s desire cannot be strengthened for Christ until we are able to see the cause of losing confidence and hope in man.” He explained that it is only when we lose confidence and hope in man that we will be able to value our miracle and know the reason for it.

On the consequence of failing to see beyond our immediate situation, Prophet T.B. Joshua said we will undoubtedly be “gripped with fear and panic.” He advised congregants not to be blighted by their present circumstances, saying, “The man who is poor is not the poor man but the man without a dream.” To illustrate, he then read from 2 Kings 6:15-17, the passage in which Prophet Elisha prayed for God to open his servant’s spiritual eyes so he could be assured of the presence of God around them despite the considerable number of their adversary.

In closing, God’s servant noted: “If you believe in God and have an attitude of absolute faith in Him, you can say what He has said, you can do what He has done.”

God’s Power On Display At The Prayer Line

Just before he began to lay anointed hands on the people at the Prayer Line, Prophet T.B. Joshua prayed: “Father, we thank You for Your mercy and grace. We thank You, Lord, for Your favour. Father, accept our thanks, in Jesus’ name.” He then told congregants: “Right now, begin to give thanks to God for His grace in your life.” As the Spirit of God flowed to them through God’s servant, the people parted ways with all forms of illness and disease, even as they threw away their walking aids and other medical items after receiving their healing in Jesus’ name!Mass Prayer—A Request For God’s Will To Be Done

In the Mass Prayer session, Prophet T.B. Joshua urged congregants to ask: “Lord Jesus, open my understanding so that I will know Your will concerning my situation.” He thereafter asked them to confess their power in Jesus Christ: “I’m justified! I’m no longer condemned! Defeat and failure are things of the past! I’m born again! I’m linked up with God!”

Prayer For Viewers—Healing For Everyone, Everywhere!

The Prayer Of Repentance

Knowing that healing, deliverance and all of God’s other blessings are ultimately for the salvation of our souls, Prophet T.B. Joshua said the prayer of repentance with congregants thus:

The Holy Spirit worked through Prophet T.B. Joshua during the prophecy ministration, causing the mountains in the people’s lives to be levelled. One of those who received prophecies was Iyabo, a middle-aged woman who was being troubled by the spirit of her recently deceased husband. “Your husband is still disturbing you because of the covenant you have done,” Prophet T.B. Joshua told her. Iyabo said that, using the Bible, she had indeed taken an oath with her husband and that his spirit had been appearing to her every week since his passing. However, she thanked God for delivering her through the prophecy.

Cecilia was told that she was lonely and had the spirit of death around her, following the gruesome murder of her loved one. She confirmed the prophecy, saying she had witnessed the brutal killing of her husband by armed robbers. “Now that the man of God has helped to deliver me from the spirit of death,” Cecilia said, “I promise God that I will sin no more.”

In the case of Catherine, a South African, Prophet T.B. Joshua began by asking, “Where is your mum?” He then told her she had been raised by a woman who wasn’t her mother and that she had been nursing emotional pain from childhood. He also said there was a woman in her family who had been regarded as a sort of ‘god’ because of her ability to read people’s palms. Catherine was also told that she acts like a man in the home. Finally, urging her to read Psalm 61, the man of God told Catherine about people dying early in her family. Catherine confirmed all the prophecies and promised to do God’s will henceforth.

“Your international passport is faulty,” Prophet T.B. Joshua said as he prophesied to Jonathan about his fake travel documents. The man of God then told him, “I want you to reshape your life.” Jonathan confirmed having travelled on fake documents and living an unedifying life, even as he promised to turn a new leaf in Jesus Christ.

“God wants to provide a way for you where there is no way.” That was the conclusion of the prophecy for Matthew, who had been issued a disengagement letter at work. The man of God said it was not God’s will for Matthew to return to his former job. Matthew confirmed the prophecy, saying he hadn’t told anyone about the letter in his pocket.

Alfred received a number of prophecies. The first was about his dream of the night before, the second about an attempt to initiate him into a cult with a white cloth, the third about his eating in the dream, the fourth about an old woman who appears in his dream and the fifth about his lack of emotion in his marriage. Matthew confirmed the prophecies, saying he used to experience disappointment and failure after having the dream. He promised to serve God with all his heart and sin no more.

Rachel received a prophecy on the source of the marital crises being experienced by her and her siblings. The man of God told her there was a time she and her siblings had gone to the village to beg their mother for forgiveness. Confirming the prophecy, Rachel said they had gone to the village to seek forgiveness from her grandmother, who had promised to deal with them because their father’s sister was unable to get an education. Rachel said, however, that her grandmother had died before they arrived the village, even as she said that all the siblings had been having marital problems. Rachel glorified God for the prophecy that delivered her and her siblings.