TIME AND SEASON - PART I - The Synagogue, Church Of All Nations - SCOAN - Prophet T.B. Joshua (General Overseer) Skip to content 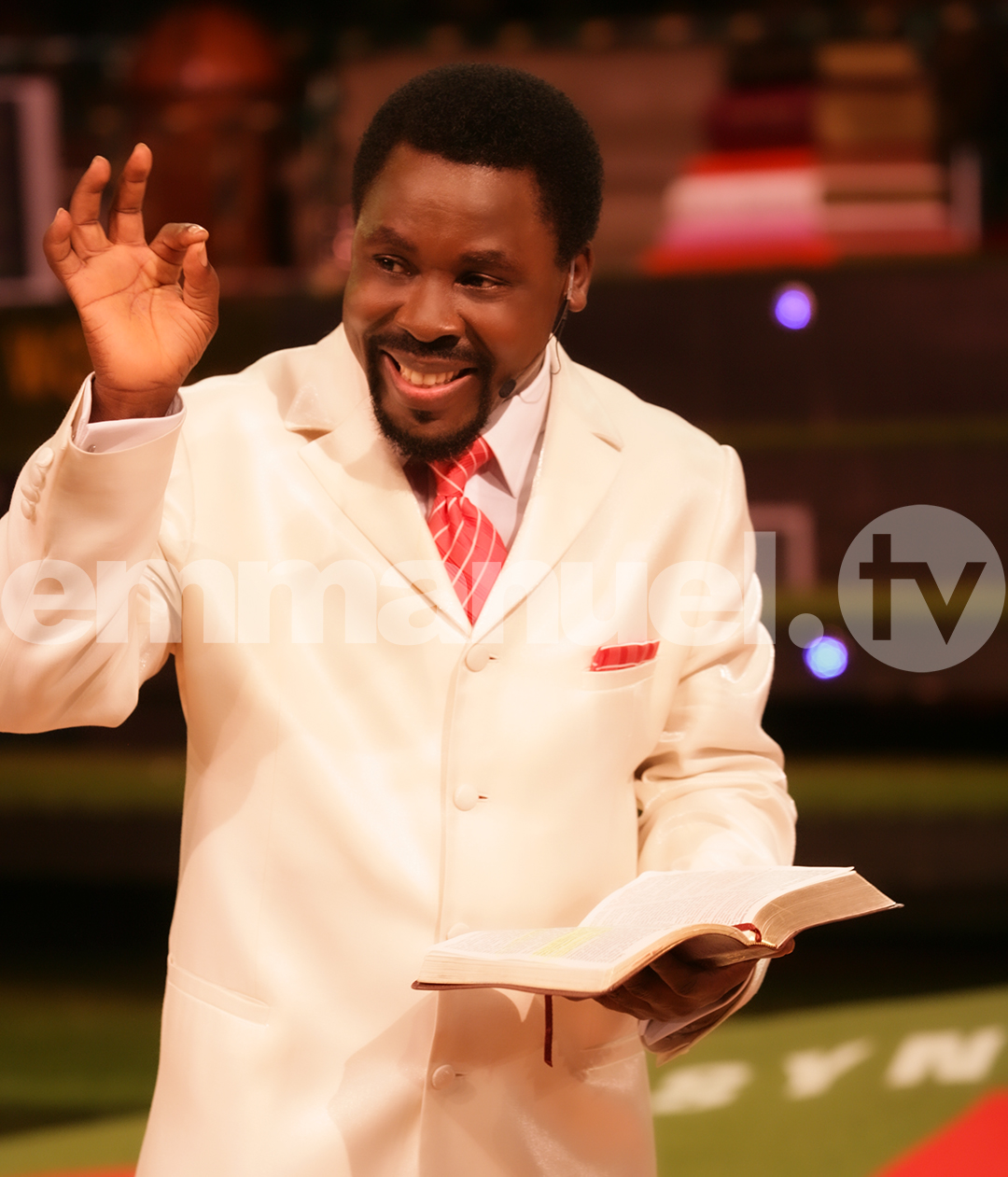 On Sunday, March 16, 2008 congregants at The SCOAN enjoyed another session of deep spiritual uplift as they listened to Prophet T.B. Joshua’s sermon entitled “TIME AND SEASON”. Fittingly, the Bible reading came from Ecclesiastes 3:11: “He has made everything beautiful in its time. Also He has put eternity in their hearts, except that no one can find out the work that God does from beginning to end.” Drawing from that reading, the man of God noted that although everything is beautiful in its time, that time is in fact limited, as we “cannot understand what God has done from the beginning to the end.”

Consequently, the man of God said, “Sometimes we work hard and pray fervently without a corresponding reward for our effort.” For that reason, he advised congregants to realise that humans have a limited understanding of things of the spirit, hence the need to stay with God even when our prayers seem not to have been answered.

Prophet T.B. Joshua stressed the need to constantly involve God in all our efforts. He said, “After you must have done everything possible, leave the issue with God. When you are tired and sick of your worldly business and frustrated in your business affairs, you are welcome to Christ.” He also encouraged the people of God to avoid placing hope in their own human capacity, saying that for “As long as self-confidence is in place in your heart, confidence born of God will be displaced.”

Teaching further, the man of God described Jesus Christ as a ‘democrat’ who does not impose His will on humans. According to God’s servant: “He allows us to exhaust whatever advantages we feel we have in the world so that when we have learned our lesson, we will value Him. What is the lesson He wants us to learn? To lose confidence in man, lose hope in man. If you have not lost hope or confidence in man, you will not value Jesus.” Prophet T.B. Joshua further said that those whom Christ designs to admit to the most intimate acquaintance with Him, He first makes sensible to appreciate how undeserving of His grace they ordinarily are.

Shortly afterwards, the man of God proceeded to the laying-on-of-hands session where contrary spirits were cast out of the people’s lives and many were healed of various illnesses and diseases. Following the prayer session, many congregants testified about their healings and deliverances. Josephine, a Nigerian, said she broke her bond with a marine husband who had caused her to bewitch numerous men. She thanked God for giving her peace after the deliverance. “I feel like a different woman today. I give glory to God,” she said.

Kapembo from Zambia said the contrary spirit in her could not cope with the fire of God in Prophet T.B. Joshua. However, she glorified God for eliminating the cause of limitations in all areas of her life. She testified: “I am free; I feel different. I feel the peace of God within me.”

Joy, a Nigerian living in Ghana, was grateful to God for her deliverance from forces from “the centre of the sea”. She said, “I feel very good now and I see the man of God is a real man of God.” She also promised to henceforth do God’s will.

“Ask God to redress your focus from your form to His form, from your purpose to His purpose,” Prophet T.B. Joshua told congregants as he proceeded to the Mass Prayer and Prophecy session. Afterwards, prophetic words identified the roots of issues in the people’s lives, thus bringing an end to them.

Jennifer received a prophecy on her pregnancy, which was the result of rape. The man of God said she was carrying a baby boy and that she was planning to do away with the baby after birth. She confirmed the prophecy and promised to surrender to God.

Dr. Okechukwu got a prophecy on his depressed younger sister and his unsettled marital life, which he confirmed.
He was assured by the prophet that God would save him from the family curse of “marrying and remarrying”.
Dr. Okechukwu promised to sin no more.

Esther from South Africa got a prophecy on her lack of affection for her husband because of her connection with a spirit husband who used to appear in her dream. She confirmed the prophecy and received her deliverance.

When the Spirit of God revealed his case to Prophet T.B. Joshua, Mr Okougbosun was giddy with excitement, rolling on the floor and walking on his knees while glorifying God for His intervention. The university lecturer had been sacked without being given a reason, as the letter in his possession stated. The man of God told Mr Okougbosun that the letter seemed to be a letter of disappointment but it was not and that God was about to do something. Delighted at the prophecy, Mr Okougbosun promised to sin no more.

“You always see ghosts.” That word of prophecy was for Comfort, a Nigerian woman from Delta State who said she used to see ghosts and that they used to talk to her all the time. As a result, she had become fearful and beside herself. To the glory of God, the prophecy set Comfort free!

Abibatu got a prophecy that the spirit of death was stalking her. “I can see a coffin beside you,” Prophet T.B. Joshua told her. Abibatu confirmed she had suffered motoring accidents in the past, even as she sought divine refuge.

“Your long life is very important for your family and people around you,” so Prophet T.B. Joshua told a man in the audience, referring to the poor state of his health and his inability to sleep despite his thriving business. The man promised to do God’s will henceforth.

“God wants to use you.” That was the prophecy for a congregant. Prophet T.B. Joshua also told him about his mother’s suffering before her death.

Mary got a prophecy on how evil people had been using her image, thereby giving her a bad name before people to whom she had been kind. Based on the prophecy, Mary claimed healing for the illness in her body.

Grace got a prophecy on her husband. She was told that she received a letter that made her unhappy but that everything would be okay after her deliverance. She confirmed that her Spain-based husband was threatening to leave her and thanked Jesus Christ for His intervention through the prophecy.

“You have a very strange ailment which you cannot explain.” That prophecy was about the epilepsy-like ailment troubling Elvis’ life. Elvis confirmed the prophecy, saying that this strange ailment was often accompanied by either shivering or internal heat. He thanked God for the prophecy, promising to serve Him with all his life.

Omolade burst into tears as he confirmed the prophecy regarding his late wife and the children she left behind. The man of God told him that he and his wife had toiled together to make it in life. Omolade promised to stay with God.

Taiye from Benin Republic got prophecies on her bedwetting and marriage to an already married man. She confirmed she had been wetting the bed from childhood and promised to do God’s will henceforth.

Finally, there were prophecies for Pastor Emmanuel on the need to bear his original name, his need for deliverance so he could achieve divine greatness in life, his receipt of three letters of disappointment and his expectation of reward from those he had been helping. After confirming all the prophecies, Pastor Emmanuel displayed his ID card to further confirm what Prophet T.B. Joshua said concerning his name.

Prophet T.B. Joshua led congregants to say the prayer of salvation: “Lord Jesus, I am a sinner. I need You as my Lord and Saviour. I need You as my Friend in life. I need You. Come into my heart; wash me with your precious Blood. Save my soul today. In Jesus Christ’s name! You are welcome to the family of God! In Jesus’ name!”

Prayer For The Viewers