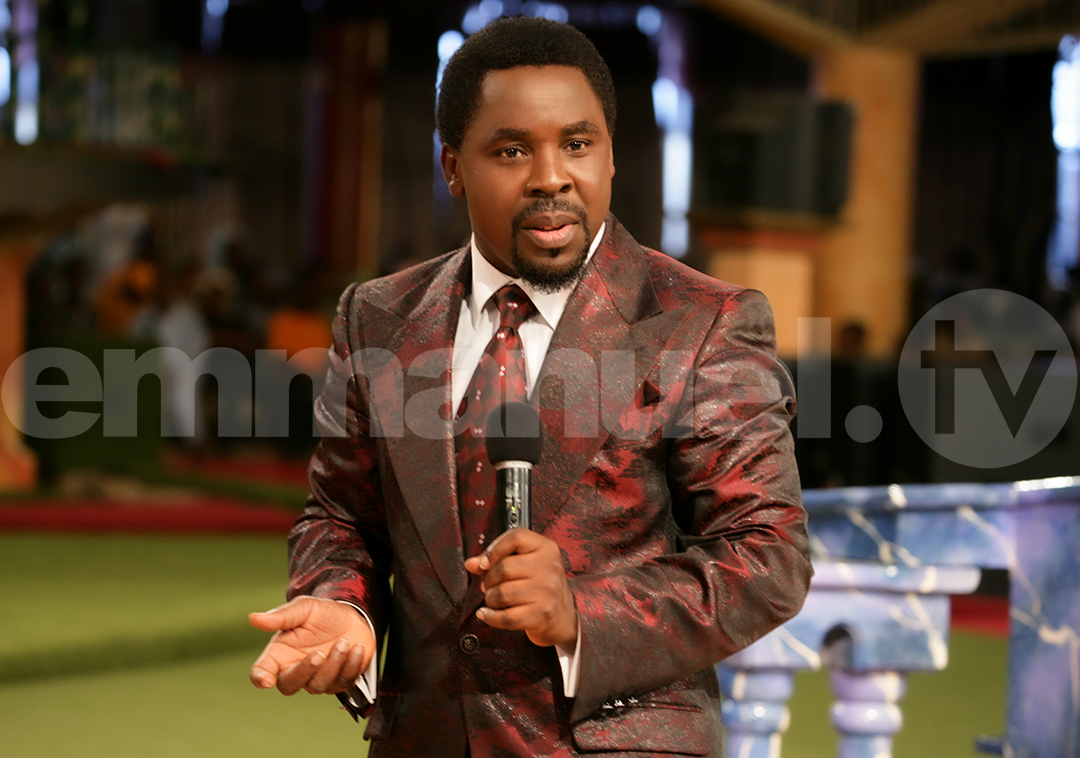 “God Almighty often brings good out of evil and promotes His purpose, even by the sin of men,” so began Prophet T.B. Joshua when he preached the message “COMFORT IN AFFLICTION” to congregants during the Live SCOAN Sunday Service of 9th March 2008.

Before making that assertion, God’s servant had just read from Genesis 37:23-24 and 26-27, where the Bible tells the story of Joseph’s older brothers’ betrayal of their father Jacob’s trust in their attempt to thwart Joseph’s divine destiny.

As it turned out, the treachery by the brothers had ultimately led to Joseph’s fulfilment of God’s agenda in his life. Therefore, with such a reassuring lesson from the Bible reading, the man of God was able to speak words of comfort to both physical worshippers at the ‘Arena of Liberty’ and Emmanuel TV viewers all over the world. “If God is with you,” he cheered them up, “you will be comforted in whatever situation you find yourself.”

Given the fact of God’s unfailing promise, therefore, the man of God urged congregants to always draw strength from divine expectation regardless of present circumstances. He said to them, “You can be happy whereas there is nothing to be happy about,” since “Your picture of tomorrow will impart a strength to endure your present tribulation.” Accordingly, he encouraged worshippers not to accept the condemnation of men but to rely on the promise of Christ’s abiding presence, even as he noted that God sometimes allows Christians to face adversity in order to prepare them for future challenges or strengthen their faith in – and love for – Him, as was the case with Joseph. The man of God said: “If the Lord is with you, each trouble is meant to advance your cause. Our God sometimes uses foolish things to prepare us in the area of mind management, in the area of material management, in the area of human management and self-control.”

Further highlighting the significance of Joseph’s reaction during his tribulations in Potiphar’s house and in prison, the man of God advised congregants to focus on their dream and goal in life. He soothed their worries with the following words: “When you remember your goal and your dream, no matter the situation you are facing, you will not look on the outside of your situation. When Joseph was in the dry pit, he asked himself, as a man of vision, ‘Where is my dream? Where is my goal? This is not where I belong!’ The situation with him looked like evil but there was no real evil in it.”

Prophet T.B. Joshua also told congregants to place their faith only in Jesus Christ, not in fellow human beings. In his words: “Before one’s desire can be strengthened for Christ Jesus, you must see the cause of losing confidence in man. When you lose confidence in man, when the miracle finally comes, you will appreciate it and you will see reason for it.” Finally, after reading from Luke 5:5, he declared emphatically: “You must talk as an overcomer. You must think as an overcomer. You must laugh as a victor.”

Next was a testimony from Patrick who had returned to The SCOAN with his wife and children to testify about the miraculous healing and the progress made since then. Because he had fractured the bones in the lower part of his right leg, Patrick had, for a long while, been unable to stand or walk – much less work for his daily bread. Brought to church in a car, he had sat helplessly in the back seat, his legs stretched out in front of him.

Accompanied by his wife, he had come for prayers certain that Jesus Christ would heal him. Once Prophet T.B. Joshua got to the car, he asked Patrick’s wife to pray and immediately Patrick began to sense the healing touch of God. Taking over from the wife, the man of God declared perfect healing upon Patrick and asked him to get out of the car and walk on his own. Now back to work, he excitedly demonstrated his healing by walking in front of the listening crowd, effortlessly and painlessly. Glory be to Jesus Christ!

Prayer Is The Key!

God’s mighty power manifested at the Prayer Line as people from all over the world received healing, deliverance and blessing for the salvation of their souls. In faith they received abundantly from God via a touch from His anointed servant Prophet T.B. Joshua.

This led to the flushing out of a diverse range of ailments and conditions from their bodies, as well as a casting out of all contrary spirits bothering them.

Words of Prophecy for God’s Children

During the service many received words of prophecy that revealed the origins of their problems and set them free from bondage in the all-conquering name of Jesus Christ.

For Fanny from Malawi it was freedom from the curse of divorce across three generations of her family: her grandmother, her mother and mother-in-law, and Fanny herself. “There is a curse in your family,” Prophet T.B. Joshua had told her. After her deliverance, Fanny promised to “continue to serve God.”

In the case of Marlene from Namibia, the assurance she received from Prophet T.B. Joshua came in form of the following words: “God is going to solve the problem now!” He had prophesied about the poor state of relations between Marlene and her daughter which had been a source of agony for Marlene.

Marlene confirmed that her daughter had indeed moved out of the house and was no longer taking her calls. Her spirit lifted by the prophecy, Marlene promised to always love God and stay close to Him.

Festus, a witchdoctor, got a prophecy on his activities in the world of darkness. Festus was told that he faced imminent death if he did not surrender his life to God. Festus promptly came out to confirm the prophecy, disclosing that he had been getting shot at in the dream since pledging to donate his body to an evil fraternity.

Because he had been troubled by the relentless attacks, as well as by his own conscience, Festus said he had also become addicted to smoking and drinking. He said he did not want to die and had come to church for divine rescue. “Now I will live my life for Jesus; I will go and sin no more,” he promised.

Prophecy also located Dorcas regarding a letter and specified that the words in the second paragraph were frightening. Upon hearing her case mentioned, Dorcas ran out screaming in the Yoruba language and waving a letter:

“Have mercy on me! I have no mother; I have no father! This is the trouble I am facing!” Dorcas had come to church all the way from Kogi State after receiving a frightening medical report that stated in the second paragraph that she would need to have another operation for a recurred ovarian cyst and multiple uterine fibroids, which may possibly result in the removal of her womb. She was therefore glad that God’s Spirit had revealed her problems to Prophet T.B. Joshua. Claiming her healing by faith, she promised to devote herself to God.

Josephine from Edo State got a prophecy on her involvement in organised prostitution. She confirmed the prophecy, disclosing that she had been engaging in the illegal trade in Italy and had also recruited other young women into the trade there. She called herself a serial heartbreaker, perpetual liar and drug dealer.

She also said that in her dreams she used to sleep with men and see herself surrounded by children. Josephine asked God for forgiveness and promised to turn a new leaf in Jesus’ name.

It was also a word of prophecy that ended years of shame and misery in Augustina’s life. When her affliction of bedwetting was mentioned, she quickly came out to confirm it.

She said she had been urinating not only on the bed at night but also on public buses, just as the prophet had said. She thanked God for the prophecy that brought her deliverance and promised to go and sin no more.

Mass Prayer
During the Mass Prayer session, Prophet T.B. Joshua read from Romans 8:35-36 and assured congregants thus: “When Jesus is supporting your position, you will be comforted in your situation.

Distance Is No Barrier – Prayer For Viewers