WHAT IS POSSIBLE IN CHRIST JESUS (2) - The Synagogue, Church Of All Nations - SCOAN - Prophet T.B. Joshua (General Overseer) Skip to content 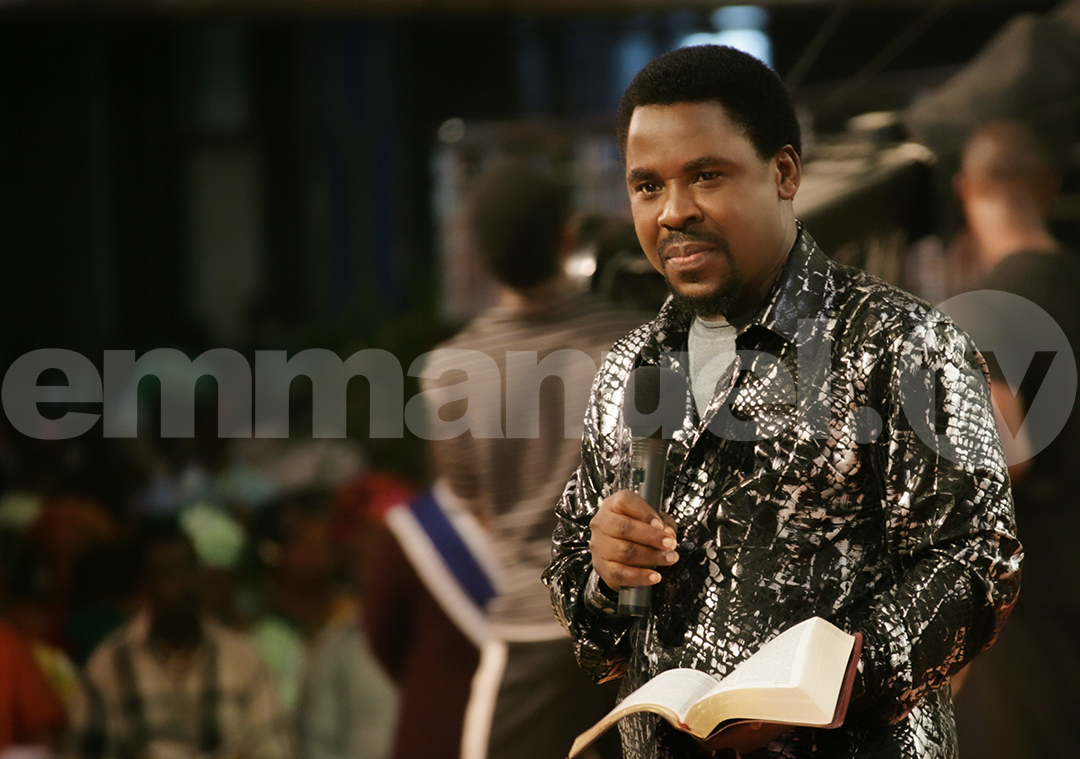 On Sunday, 24th February 2008 Prophet T.B. Joshua continued his sermon from the previous week entitled “WHAT IS POSSIBLE IN CHRIST JESUS”. He took his first reading from Romans 10:8-12 and then told congregants to avoid the error of basing their faith on feelings and emotions. “Some people base their spiritual experience on feelings and emotions,” he said. Basing faith on such physical sensations, the man of God added, leads to problems “when feelings and emotions change.” As such, he noted, Christians should endeavour to display only faith in Christ Jesus that is “based on something with more stability than our feelings”— which is God’s Word, the only thing that is consistent, stable and regular.

In the course of the sermon the man of God also cited John 20:24, Mark 9:23 and Luke 10:19, among others, as he shared biblical principles on faith with congregants. One such principle, he said, is recognizing and confessing the resurrection power of Jesus Christ which makes Jesus a worthy object of our faith. Another principle is praying “with a lively faith” in our heart. According to him, “It is this belief and confession that bring about the power to heal, power to deliver, power to save, power to do all!”

God’s servant equally told the church that believers “are not restricted by space, time and circumstances,” meaning that distance is no barrier, that the Word of God is not time-bound and that there is never a sickness Jesus cannot heal, a disease He cannot cure or a burden He cannot bear. Moreover, he explained that, since the basis of their claim in Christ Jesus is anchored on their capacity to believe, Christians must believe “enough to attract and accommodate all rights and privileges in Christ Jesus.”

On the power in the name of Jesus Christ, Prophet T.B. Joshua declared: “We all know that there is no other name by which diseased bodies can be cured, no other name by which sinful souls can be saved. Miracles and wonders are done in the name of Jesus, not by repeating the name as a charm but by believing in it as a divine revelation of grace and goodwill to men.” As he was about to end the sermon he noted that “Faith is a human act and at the same time a divine gift,” meaning that Christians have a duty to activate God’s power through faith.

God’s Presence At The Prayer Line

At the Prayer Line, hundreds of congregants received healings and deliverances in the mighty name of Jesus Christ. After vomiting blood and other poisonous substances as the power of the Holy Spirit penetrated their systems, the congregants, who had come from all over the world, were declared free from afflictions such as tuberculosis, asthma, difficulty in walking, high blood pressure, HIV/AIDS, body itching and evil attacks, among others. Thereafter they testified about the immediate impact of God’s power on their bodies and in their lives.

After the Prayer Line ministration there was also a general prayer session for viewers all over the world. Prophet T.B. Joshua began: “Father, we thank You! God called His children out of Egypt and He made a promise of healing with them…. I command, in the mighty name of Jesus, sickness and disease to get out of your system! Anywhere you are—are you on the sickbed, are you sick? What is your problem? Never a sickness Jesus cannot heal!

Giving for the Glory of God

Asking congregants to seek out those in need and help them, Prophet T.B. Joshua observed as follows: “Our position in Christ Jesus is enhanced each time we help our fellow brother. You serve God when you help your fellow brother.” To a couple of needy families, he then offered crucial material support in cash and other items comprising a Bible and a bag each of rice and flour—with the support of Emmanuel TV Partners all over the world.

One of the recipients was Maria, who had been widowed for five years and had gone into prostitution because of hardship. Owing to lack of money Maria had lost one of her sons when she could not get him adequate medical attention. She received the sum of three hundred thousand naira for setting up a business and supporting her children’s halted education.

Eunice, another widow, also received two hundred thousand naira for accommodation and supporting her family. She had lost one of her children to excessive exposure to cold in an uncompleted building that later got burnt.

Under the leading of the Holy Spirit, Prophet T.B. Joshua also ministered prophecy and deliverance to many congregants. For Mohammad from Iran it was about his previous marriage. He was told to seek forgiveness from God and his wife as a way to maintain his healing. For a 65-year-old man from Botswana it was a prophecy on a curse that his murderous grandfather had brought upon his lineage. “We don’t marry because of that thing,” the man disclosed, even as he spoke of the necessity of knowing how to serve God properly.

For Dambudzo, a 26-year-old Zimbabwean, the prophecy was about the circumstances of her birth. She said that her brother had died on the day she was born. Then she requested prayer: “Man of God, my name means problem. Please deliver me!” Further in her confirmation, she said that she had been experiencing troubles, bad luck, disappointment and failure. Right after the prayer of deliverance, however, she said her heart had begun to feel light.

In the case of Ngozi, God’s Spirit revealed that she had been smeared with spiritual excreta, which was responsible for her inability to attract worthy men. He told her: “Your body is not the one I’m looking at. They have removed your real body. That is why old people are coming your way; even crippled people will come—they want to marry you.” She then received a touch of deliverance from Prophet T.B. Joshua. “Let there be light!” he declared upon her. After the prayer, she said: “Before, I was heavy but after the prayer I feel very light, very free.” A week later, Ngozi returned to church to testify about how she had gained victory in her dream and how various men were now asking for her hand in marriage. Glory be to Jesus Christ!

Patience from Ghana received a prophecy on her mother’s maltreatment of her father and her eventual abandonment of their home, leading to Patience’s father’s untimely death from loneliness. Patience was told to forgive her ailing mother. Patience’s husband, Christian, thanked God for revealing the situation to His servant.

Michelle from Australia received a prophecy on her dream life: “When you sleep, there’s a strange dream you have. This is the only thing you are still suffering now. You are free but that strange dream—you don’t know how it comes.” Michelle confirmed the prophecy, saying that she would often dream about something negative three times in a row and it would come true. She thanked God for delivering her through the prophecy, even as she testified about her healing from a number of illnesses after receiving a touch from Prophet T.B. Joshua a week earlier.