WHAT IS POSSIBLE IN CHRIST JESUS - The Synagogue, Church Of All Nations - SCOAN - Prophet T.B. Joshua (General Overseer) Skip to content 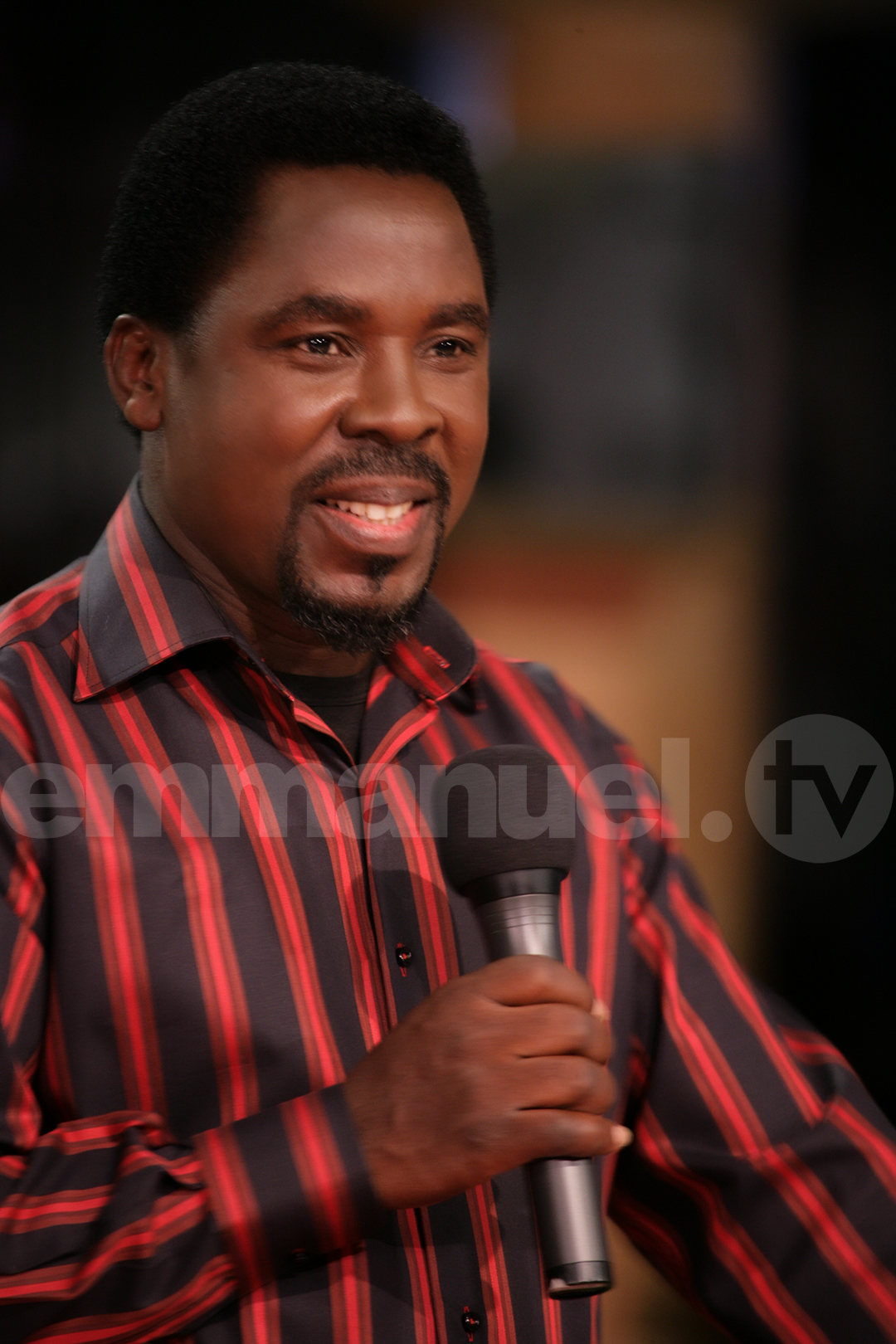 The SCOAN Sunday Service of 17th February 2008 began with a rendition of the song ‘Heavenly Father’ by the Emmanuel TV Choir, attired in white fabric that lit up the stage and reflected an ambience filled with God’s presence. The service was another in the series of rebroadcasts from the archives.

Charity Another Ministry Of The Gospel

After the sermon, some people who had been facing severe hardship were showered with love and care by Prophet T.B. Joshua and the Emmanuel TV Partners. They were given sums of money as well as a Bible and bags of rice and flour. Margaret from Kogi State, a helpless mother of five who had wanted to take her own life, received the sum of two hundred thousand naira, a Bible and a bag of rice as well as a bag of flour.

Another beneficiary was Florence, a widow with four children who lost her father-in-law shortly after her husband’s death. According to Florence, it had not been easy fending for herself and her children. However, her heart was gladdened when she received the sum of two hundred thousand naira, a Bible and bag of rice as well as a bag of flour From Prophet T.B. Joshua and the Emmanuel TV Partners.

Mojisola, a widow, got the sum of two hundred thousand naira, a Bible and a bag of rice as well as a bag of flour.

Another widow who shared her ordeal was Stella, a Ghanaian. According to her, she had been given a quit notice by her landlord. She was given the sum of two hundred thousand naira, a Bible and a bag of rice as well as bag of flour by Prophet T.B. Joshua and the Emmanuel TV Partners. She was also assured that accommodation would be secured for her when she got back to Ghana.

Testimonies For The Glory of God

“An ordinary man of God wouldn’t have dared to approach me!” Lucky declared while testifying before The SCOAN congregation on Sunday, 17th February 2008. The previous Sunday, Lucky received his freedom from the captivity of satan after Prophet T.B. Joshua prayed for him, in Jesus’ name. During that deliverance session Lucky had ripped off the clothes on his upper body and struck a fighting pose towards the man of God. However, the boastful ‘crocodile’ spirit in him was rendered powerless in the presence of God’s Spirit, which brought the afflicted man to tears eventually as he begged for deliverance.

During his testimony, Lucky told congregants and viewers all over the world that other ministers had never gone beyond touching his head or hands. According to Lucky, Prophet T.B. Joshua was the only one who had been able to touch his chest, which apparently was the location of his ‘crocodile spirit’ that was in the form of a centuries-old woman. It had been hoped that the crocodile spirit would protect him and also bring him good luck but opposite had been the case for Lucky as the evil spirit had in fact brought him nothing but misfortune and misery, forcing him to move from city to city in the search for material success.

To the glory of God, Lucky was among the many that were delivered through the anointing in the life of Prophet T.B. Joshua.

“I thank God for the grace of God in his life,” Lucky said about Prophet T.B. Joshua just as he thanked God for the freedom he has received.

At The SCOAN Prayer Line, there was a long row of people who had come from various parts of the world to seek the face of God for His divine touch. Preparing their hearts for what they were about to receive, Prophet T.B. Joshua prayed thus:

As Prophet T.B. Joshua ministered prayer and deliverance to the people, they received instant healings and deliverance in the mighty name of Jesus Christ. The cases included difficulty in walking, swollen body, fibroids and tubal blockage, barrenness, asthma, pregnancy complications, cancer, among others.

Not only did congregants witness the demonstration of God’s power at The SCOAN prayer line, they also witnessed His mightiness as prophetic messages were being given to congregants during the service by Prophet T.B. Joshua. Among the many who received words of prophecy was Leon, a South African who had a big wooden cross hanging on his neck. As Prophet T.B. Joshua saw him, he told him to focus more on his inner commitment to Jesus Christ, emphasising that our lives are in God’s hands and that a thorough reformation of heart and life is what the Lord demands for. Falilat from Nigeria also received a prophetic message from Prophet T.B. Joshua that brought about a powerful deliverance in her life.

Before concluding the service, Prophet T.B. Joshua offered a mass prayer that is not time-bound:

During a SCOAN Live Sunday Service sometime in 2010, Prophet T.B. Joshua prophesied thus: “There is a witch doctor here. You are ready to surrender your life—this is why I call you; you know your days are numbered. I mean you are very close to the grave. You cannot pay for what you have done. You are a witch doctor—a big one. Come out—it is time for you now to surrender.”

Stephen, a Cameroonian, came out to confirm the prophecy while admitting his profession. Prophet T.B. Joshua told him that his wife was at the point of death. In confirmation, Stephen said his wife was on the sickbed, scratching away at her skin and that he himself was feeling fire in his stomach. Falling to his knees, Stephen begged for God’s mercy, saying he had travelled for three days to get to The SCOAN from Cameroon and that he had not eaten anything during that time. Eventually, Prophet T.B. Joshua prayed for Stephen, who thereafter ate up a steaming bowl of stewed rice.

The following Sunday, Stephen as well as his wife and son made their way to The SCOAN. Stephen told congregants and viewers all over the world of how he had returned home with the Anointing Water given to him by Prophet T.B. Joshua, which he ministered on his wife and she regained her health. Stephen’s wife said she had felt something come out of her once the Anointing Water was ministered on her in the hospital. Stephen had also come with five people whose lives had been badly affected by his charms. After Prophet T.B. Joshua prayed for them, Stephen, his family and the five people were set free, in Jesus’ mighty name!