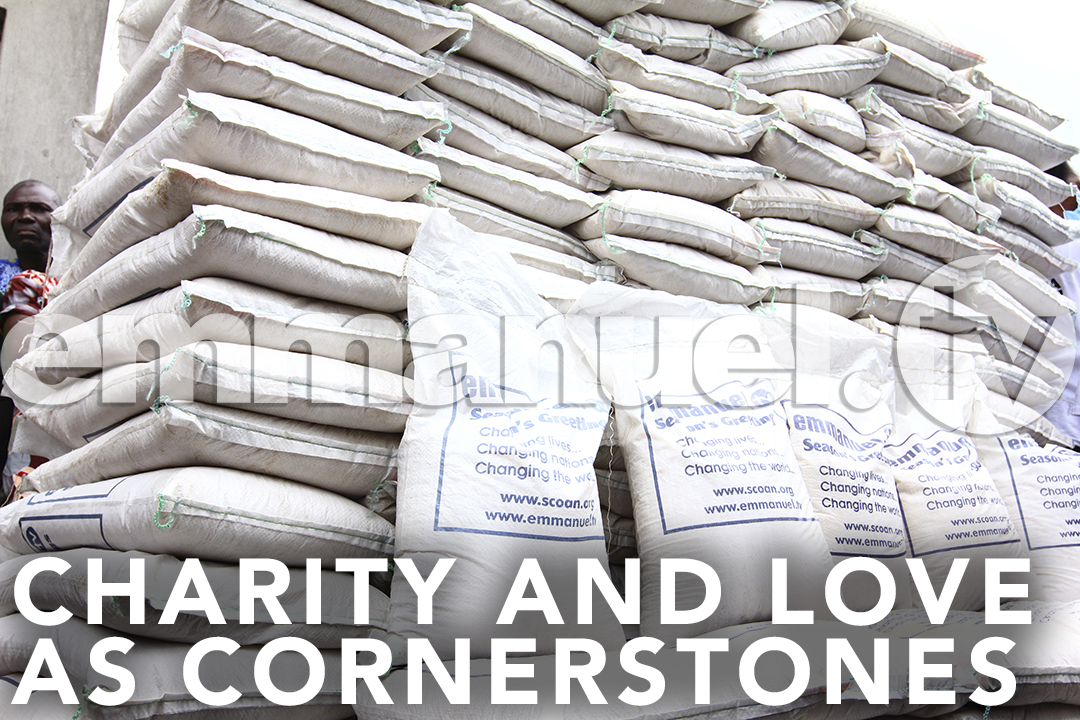 It was a fitting tribute in honour of the life and legacy of Prophet T.B. Joshua when the week-long series of activities celebrating his life and legacy began with charity missions to communities of people urgently in need of love, care and support. As was the tradition with God’s servant, Prophet T.B. Joshua, the Emmanuel TV Team sought out some of the most care-deprived groups of individuals in various communities. This article provides highlights of that particular charity mission, which was undertaken on Saturday, 3rd July 2021, as well as a summary of the charity mission that took place on Monday, 5th July 2021.

At Alaba Rago: Succour For The Suffering

Located in Ojo, Lagos, the Alaba Rago territory for the needy was the first place visited by the Emmanuel TV Team on the day. Residents of the sprawling quarters comprise lepers as well as the blind and the differently able. Given the deprived state of their environment and bodily conditions, these Muslim men and women, as well as children, are unable to work and earn a living for themselves, hence their need for constant care and support from kindhearted people.

Upon being reached by the Emmanuel Team, one of the home’s leaders told of how they had received the news of the passing onto glory of God’s servant’s with shock, causing them to shed tears of pain and despondency. He said they had heard the news on the radio during the condolence message from President Muhammadu Buhari.

“Your loss is our loss,” said the leader, “because Prophet T.B. Joshua has been helping this community for years. He is a Christian but he is a man who loves everyone, whether you are a Muslim, Christian or pagan.” He then pleaded for the Emmanuel TV Team not to abandon the community.

“We want to plead with you,” he begged, “to continue supporting us in the same way he has been helping us all these years.” As a way of assuring the community of God’s abiding love for them, the Emmanuel TV Team presented them 200 bags of rice and a cash gift of one million naira. They were also reassured of a continuation of the relationship that Prophet T.B. Joshua and his team had forged with them over the decades.

At Agege: A Reason To Smile Again

He also expressed sadness at the passing onto glory of God’s servant, saying: “We were so sad when we learned of his passing but we are happy to see your team here again today, knowing that God will continue to use this ministry to help meet our needs.” The Agege community also received 200 bags of rice and a cash gift of one million naira.

At this point, it is again worth recalling the words of Prophet T.B. Joshua: “Your success and happiness in life depends on your willingness to help others solve their problems.”

Oko Baba: Still On The Radar Of God’s Love!

In continuation of their long-standing relationship with the Oko Baba Home For The Destitute in Lagos, the Emmanuel TV Team showed love and care to another community of Muslims comprising lepers as well as the blind and physically challenged. The secretary of the community, Muhammed Baba, spoke of how they were thrown into mourning on hearing the news of Prophet T.B. Joshua’s passing. “Prophet T.B. Joshua is a Christian,” he said, “but he never discriminated against anyone based on religion; he helped all.”

On specific areas of help received from God’s servant, he said: “He has been supporting our community for the last fifteen years. He sponsored our children’s education. He bought us school uniforms. He even gave us a bus to assist in our transportation.” He then expressed his community’s gratitude: “We are eternally grateful for all he has done for us.”

The Emmanuel TV Team responded by assuring the Oko Baba residents that they would continue to enjoy such acts of charity, following which the team gave them over 300 bags of rice and a cash gift of one million naira. “As Christians, we are called to respond to all human needs, for that is what love entails,” Prophet T.B. Joshua always stressed.

For The Elderly And The Widows: The House of God As Refuge

In line with Prophet T.B. Joshua’s passion for caring for the elderly, the Emmanuel TV Team also ensured to reach out to the elderly and the widows. After being invited to the church as usual, they were reassured that God’s work of caring for them would continue.

The Emmanuel TV Team then gave them a total sum of 2.1 million naira and 440 bags of rice. Those who spoke on behalf of the two groups said that although the news of Prophet T.B. Joshua’s passing was painful to them, they knew that it was God’s divine will.

Thereafter, they prayed for the Emmanuel TV family and thanked God for the continued love and support from Emmanuel TV. In another remarkable quote from God’s servant, it is worth remembering that “The greatest in the sight of God is the one who loves his neighbour.”

A Visit To The Orphans

On July 3, 2021, in keeping with the prophet’s love for children, the Emmanuel TV Team also reached out in compassion to a small orphanage in Ikotun, Lagos.

They gave them 50 bags of rice and 250,000 naira. For the founder of the Bethlehem Charity and Orphanage Centre, Mrs Olowoyeye, the relationship was a well-established one.

Speaking on T.B. Joshua’s regular assistance, she stated that it was not a new venture but a continuation of fulfilment, which was much appreciated by the establishment. In her own words, “He has been coming to water and support us.” Wisdom, Favour, Elizabeth and 11-year-old Usman were among some of the orphans who came forward on behalf of the orphanage children to express their gratitude.

Charity On The Home Front

On July 5, 2021, the Emmanuel TV Team put wide smiles on the faces of residents of three communities around The SCOAN. These communities are located in Ikotun-Egbe, Agodo-Ejigbo and another just close to The SCOAN Prayer Mountain.

In all, the three communities received a total cash gift of nine hundred thousand naira and 900 bags of rice. One pleasantly surprised recipient said, “I had thought the rice would finish when Prophet T.B. Joshua left but I was amazed when they called me to come and see this huge mountain of rice.” Generally, the residents expressed their belief that the spirit of the prophet remains alive.

To cap up the activities, the route Prophet T.B. Joshua took every day from the church to The SCOAN Prayer Mountain was lit up with singing and dancing as the community members, flanked by their chiefs and leaders, joined the Emmanuel TV Team to celebrate the prophet’s commitment to giving to those both far and near. Indeed, as Prophet T.B. Joshua always asserted, “The beauty of life does not depend on how happy you are but on how happy others can be because of you.”