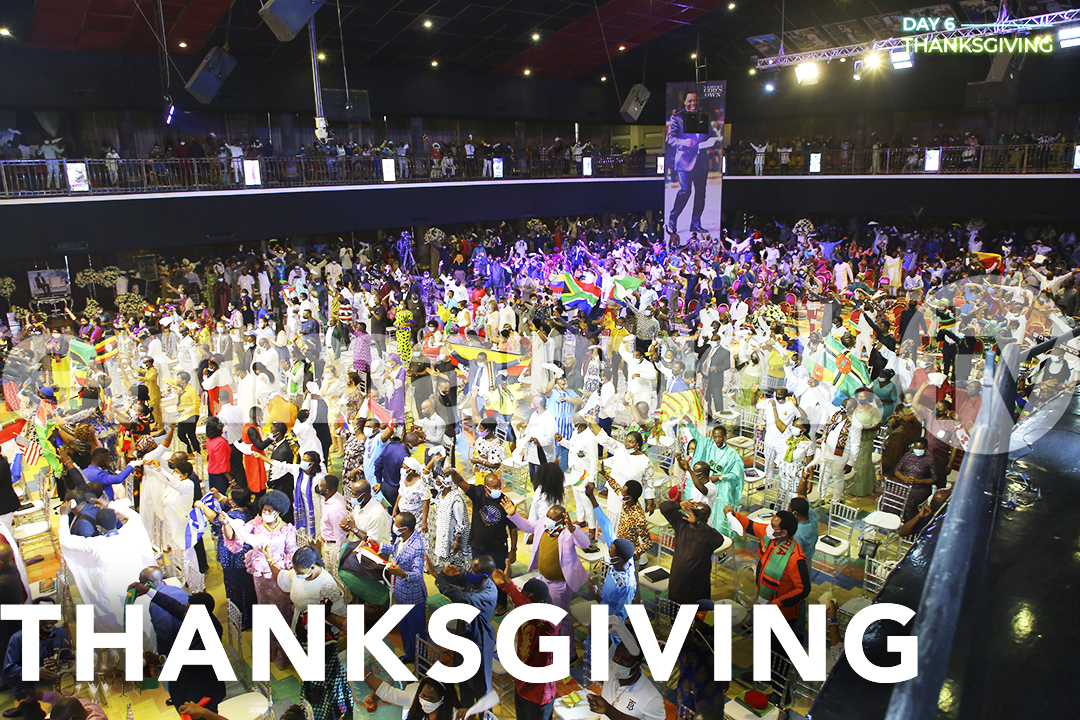 On Sunday, 11th July 2021, a thanksgiving service was held to round off the week-long series of activities celebrating the life and legacy of God’s anointed servant Prophet T.B. Joshua. To begin the service, Prophetess Yinka prayed thus: “O Holy Spirit, You are the Vine and we are Your branches. Let our lives flow from You, in Jesus’ name!”

And in that same attitude of prayer, The Emmanuel TV Choir took over to perform the mightily anointed song “Sin’s Power Over Me Is Broken”, a song composed by Prophet T.B. Joshua. To the glory of God, numerous congregants fell under the power of the Holy Spirit, vomiting the poisonous substances in their systems as they received their deliverance, in Jesus’ name.

Next, following from the events of the previous day, a woman testified about the miracle her son received as they both watched the laying-to-rest service for Prophet T.B. Joshua. The woman in question, Cherry Nnadi, began thus: “I experienced something I had never seen in my life.” Her son Success had sustained a left-arm fracture that had been the source of pain and discomfort, with his arm swollen and filled with sores. As mother and son were watching, all of a sudden, Success’ fractured arm began vibrating.

Amazed, Cherry turned to him in excitement as the little boy narrated how he could see Prophet T.B. Joshua ministering healing to his arm, with a cameraman standing beside God’s servant. A bit incredulous at what was happening, Cherry asked her son to stop joking but Success insisted that he had indeed been healed and had seen Prophet T.B. Joshua wearing white clothes and white shoes. He said God’s servant had tapped on his arm and told him, “You are free!” Success, therefore, advised people to continue believing in God. Gracious, Success’ father, thanked God for his son’s miracle and urged people to keep believing in God’s power.

After the testimony, an eminent leader of the Apostolic Church in Nigeria, Prophet (Dr.) Samuel Kayode Abiara, gave a word of exhortation at the thanksgiving service. Among other things, he noted the importance of the man of God’s legacy, stating: “Today is a special day of thanksgiving to God for letting His son, Prophet T.B. Joshua, leave a lasting legacy for generations to come.

Truly it was a life well spent.” Prophet Abiara also spoke glowingly of God’s servant’s impact on the church and the world at large, declaring: “Prophet TB Joshua is a pride to the Body of Christ all over the world. The whole world will miss him. All the less privileged will miss him. He is a giver and followed the footsteps of Jesus Christ. The man of God laid an example; he never ate his food alone, he never spent his money alone.”

Subsequently, there were performances by local and international gospel musicians. First to perform was American artiste Brian Courtney Wilson, followed by two other American acts, Byron Cage and Shirley Murdock. Moreover, there was a pre-recorded video tribute, as well as performance, by renowned American gospel artiste Fred Hammond.

Speaking of God’s servant, Hammond said: “Words can’t describe the loss but we can try to describe the life. Just a little bit of the great philanthropy and charity work he has done – this world is a better place. He’s left it better than he found it. We honour you, sir.

In her own words of exhortation entitled “CONTINUE THE LEGACY”, Prophetess Angela began by urging congregants “to let love lead.” Regarding the impact of the ministry of God’s servant, she said: “Through his ministry, we realised that God’s power cannot be limited by space, time or circumstance.

We came to know that God is even more powerful, mightier, more majestic in distance because God is Spirit. He showed us that the age of miracles has not passed, the Miracle Worker is still alive – His name is Jesus Christ but that miracle, healing and deliverance is not an end in itself; it is a means to an end, which is the salvation of your soul. And as we received our healing and deliverance, he asked us simply to go and sin no more.”

On making Heaven as the ultimate reward for obeying God’s commands by exercising faith in the Word and doing good to fellow humans, Prophetess Angela said: “We, children of God, must act under the guidance and government of the Holy Spirit through His Word and by His Spirit. In other words, we must allow ourselves to be ruled by His Word and His grace to be our principle, for God does nothing without His Word. The child of God bears the image of his Father by being good and doing good, knowing that the words we speak, the conversations we have with people, the love we show, are part of the talents we are entrusted with. They shall be evidence either for or against us on the Last Day.”

Thereafter, Prophet Racine introduced a book on Prophet T.B. Joshua entitled T.B. Joshua – Servant of God. He disclosed thus: “Before the departure of Daddy, for the first time, he approved a book to be written about his life and ministry.” He also stated that God’s servant had pre-recorded a video introducing the book. “When you read this book, you read his life,” Prophet Racine concluded.

To cap up the thanksgiving service, congregants and viewers all over the world got a chance to watch a Mass Prayer clip of Prophet T.B. Joshua, which is not time-bound. The man of God prayed thus: “Whatever condition, whatever situation you are in, whatever name they call it – never a sickness Jesus cannot heal, never a burden Jesus cannot bear and never a problem Jesus cannot solve.”

As congregants prayed along with God’s servant, signs and wonders followed in the church auditorium and the overflow section, with many receiving healing and deliverance after vomiting blood and other poisonous substances in the mighty name of Jesus Christ.

To the glory of God, the thanksgiving service ended with a praise session led by The Emmanuel TV Choir.