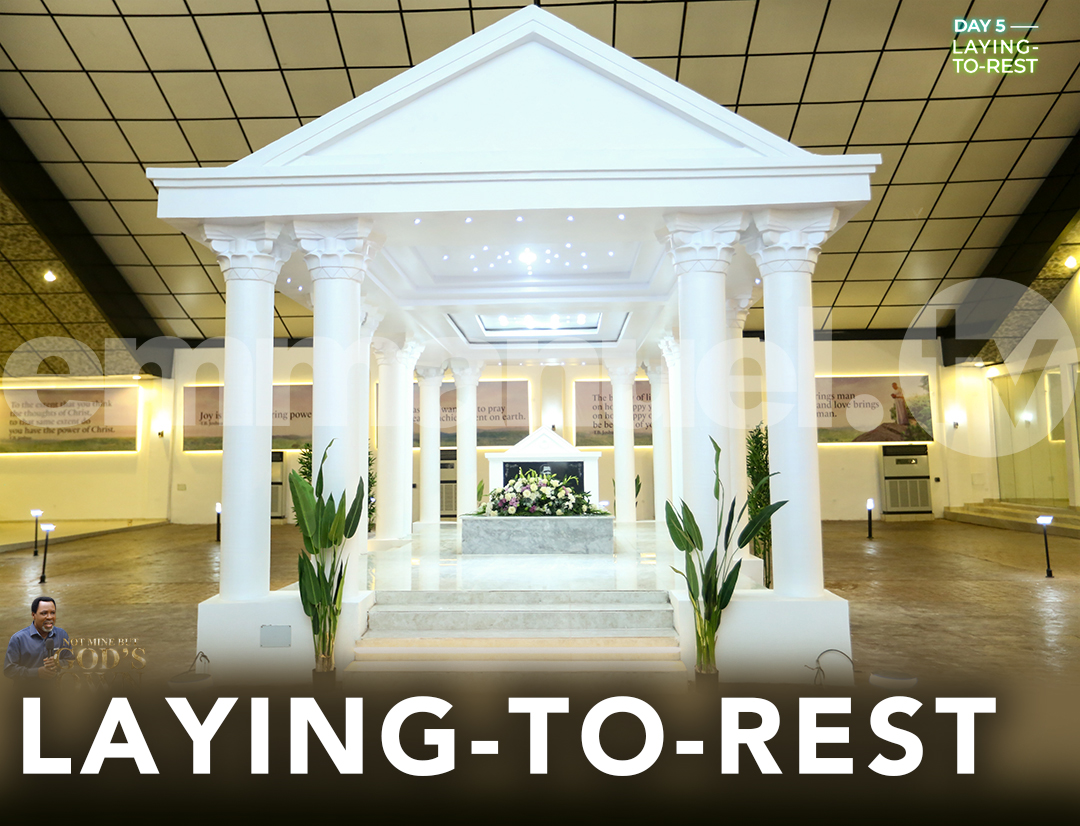 On Friday, 9th July 2021, Prophet T.B. Joshua was laid to rest in a mausoleum on the premises of The Synagogue, Church Of All Nations (SCOAN).

It was an event that attracted national and international attention, given the range and impact of God’s grace upon His servant’s life as reflected in the lives of the millions all over the world who benefitted directly or indirectly from that uncommon grace.

After an opening prayer by Pastor Gerardo Montejano from Mexico, Bishop Trevor Williamson from The Bahamas gave a word of exhortation to congregants. Speaking on the life and legacy of God’s servant, he said that Prophet T.B. Joshua “walked closely and humbly with his God.”

Noting the limited time apportioned to everyone to live on the surface of the earth, Bishop Williamson reminded congregants of the man of God’s last message, wherein he urged the people “to watch and pray” after telling them there was “a time to return home after service.” Bishop Williamson added: “He encouraged us to find God; he showed us the way. He said the secret of bringing Jesus to the scene is to let the Word loose in you, dominate you, rule in you, live in you.”

On his part, Bishop Steven Ogedengbe from Nigeria noted that those who followed Jesus Christ in their lifetime end up enjoying His resurrection power and get into a glorious new existence in the afterlife. According to him, “when a believer departs from this world, he goes into glory where there is no more conflict, strife, skirmishes and persecution.”

Afterwards, Pastor Robert Acosta from Argentina gave a sermon in which he reiterated the need to make Jesus Christ the cornerstone of our life. Taking excerpts from one of the messages of Prophet T.B. Joshua, he stated: “Christ is the Way, the Truth and the Life. That is, He is the Beginning, the Middle and the End. In Him, we must set out, go on and finish. As the Truth, He is the Guide of our way; as the Life, He is the end of it.” Noting that Jesus Christ is “greater than all the combined forces of hell and earth” and “has conquered death for our sake,” Pastor Acosta noted as follows: “His purpose is to bring us to His Father in Heaven. Therefore, all the divine power of Heaven is engaged for the accomplishment of that purpose.”

There were musical performances during the laying-to-rest service. Shirley Murdock, acclaimed American gospel artiste performed “Spirit Pray Through Me”, a composition by Prophet T.B. Joshua alongside The Emmanuel TV Choir. American Gospel Legend, Byron Cage, also rendered some of his tunes in praise to the Almighty God.

The Ondo State Government House Choir sang some of the hymns while a special flute performance of “Amazing Grace” was given by Tee Mac Omatshola at the interment service for Prophet T.B. Joshua.

In his message to congregants, Governor Akeredolu said he and the entire people of Ondo State took great pride in the achievements of Prophet T.B. Joshua, whom he described as “a rare gem” and “a special breed” whose passing is “a loss to humanity.” Elaborating, the Governor said: “He contributed greatly to uplifting the downtrodden, in the emancipation of the less privileged – widows, orphans – special people. He touched their lives economically and spiritually. He was a special child – his love for the less privileged in communities is something all of us can bear witness. We see the wonders he performed.”

Governor Akeredolu also told of how he and his wife had benefited from the man of God’s generosity, noting thus: “His love was not only for the less privileged – let us all say the truth. Even those of us who are privileged, we have also benefitted from his love.” The Lagos State Governor, Mr Babajide Sanwo-Olu, was represented by the Commissioner for Home Affairs, Prince Olanrewaju Elegushi, who noted: “Prophet T.B. Joshua’s story is inspirational. He lived with the common man but became an uncommon minister…. I urge all Christians to adopt Prophet T.B. Joshua’s spirit of dedication, love and sacrifice …. he fulfilled destiny by living for others.”

Also in attendance was Olori Naomi Adeyeye Ogunwusi, the wife of the Ooni of Ife, who gave a message on behalf of the king. Prophet T.B. Joshua, she said, “taught everyone life lessons with his lifestyle.”

Observing that “We are here to celebrate the life and legacy of God’s servant, God’s own, God’s Prophet – T.B. Joshua,” Prophet Chris gave a message entitled “THE LEGACY LIVES ON,” taking his reading from Matthew 6:6. The reading says: “But when you pray, go into your room, close the door and pray to your Father, who is unseen. Then your Father, who sees what is done in secret, will reward you.” Quoting Prophet T.B. Joshua, Prophet Chris asserted: “The Holy Spirit is more interested in what we do secretly, privately because the One you serve in secret will stand to reward you in the open.”

Against that backdrop – and pointing to The SCOAN Altar – Prophet Chris declared emphatically: “The secret of Prophet T.B. Joshua’s ministry in front of this altar is his lifestyle behind the altar! The remarkable results we all see on Emmanuel TV – effortless healing, instant deliverance, accurate prophecy, profound teaching, spontaneous miracles – is just an overflow of his relationship with God.” Prophet Chris then proceeded to list several character traits of Prophet T.B. Joshua, including his cherishing of processing more than result, his valuing of character more than gift or talent, his constant consciousness about God’s presence, his readiness to dishonor himself to honour Jesus Christ, his commitment to building lives rather than structures, his willingness to leave every battle against him for God, as well as his accessible yet untouchable nature.

Given that such attributes contributed immensely to Prophet T.B. Joshua’s ability to fulfill his divine mandate, Prophet Chris advised congregants to learn to leave their own battles for God while letting go of offence, bitterness and bad feelings towards others.

After the message, Serah Joshua took the third Bible reading from 1 Thessalonians 4:13-18, following which Dr Gary Tonge urged congregants to realise that, for Christians, physical departure from the world actually translates into being with God in Heaven. “The moment we are absent from the body,” he assured them, “we are present with the Lord.”

Giving the vote of thanks, Serah Joshua spoke thus: “I want to thank you all for showing your love and honour on the passing of my father. I also want to thank you for your prayers and support at this moment. I thank our viewers watching us all over the world on Emmanuel TV. May God bless you all.”

At the end of all the activities inside the church auditorium, the body of Prophet T.B. Joshua was taken out in a procession led by his immediate family and his disciples amidst performance by the Nigerian Air force Band.

At the mausoleum, where the body was to be laid to rest, a short gravesite sermon was given by Prophet Racine, following which the final rites were performed first by the wife and children and then The Disciples, as well as national and international dignitaries.

Immediately after the laying-to-rest, a Mass Prayer clip of Prophet T.B. Joshua was played for congregants. The man of God said, “This prayer is not time-bound. Anytime you hear it, the presence of God is maintained”. The instant reactions proved the mighty presence of God!

Many people received healing and deliverance, vomiting blood and other poisonous substances in their system as the Holy Spirit suffused the atmosphere. Countless others testified on social media that having connected in faith during the Mass Prayer Clip, they were instantly healed, delivered and set free.