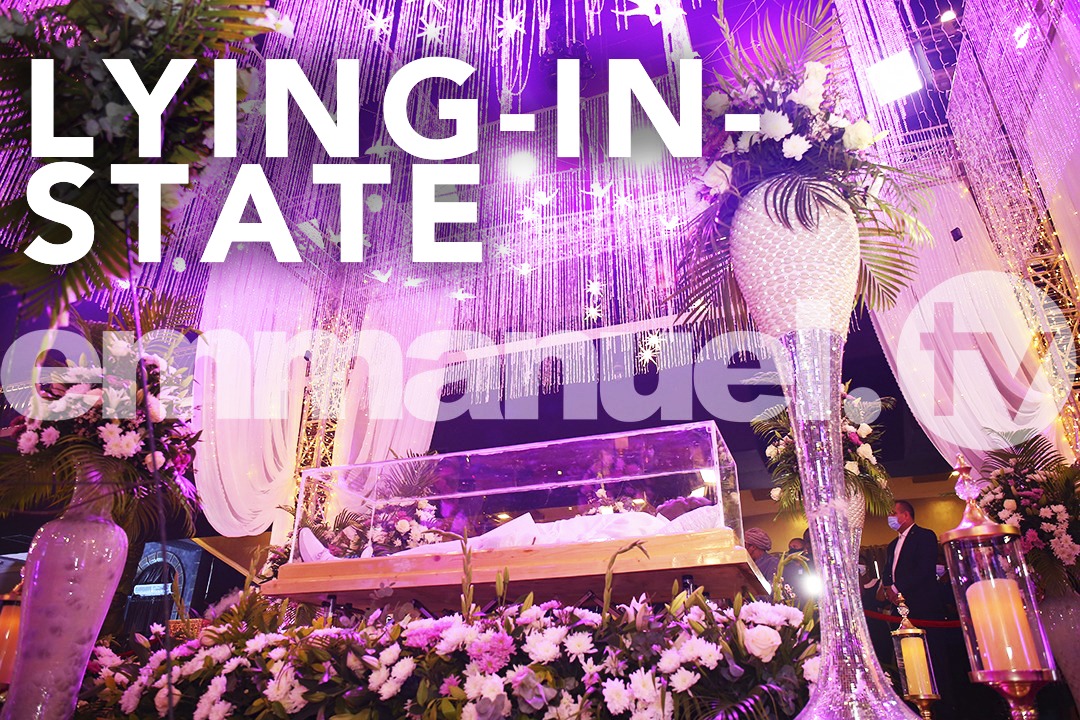 On Thursday, 8th July 2021 – the fourth day of the week-long series of activities tagged “CELEBRATING THE LIFE AND LEGACY OF PROPHET T.B. JOSHUA” – people from all walks of life gathered at The Synagogue, Church Of All Nations (SCOAN), Ikotun-Egbe, Lagos, Nigeria to view the body of God’s anointed servant Prophet T.B. Joshua as it lay-in-state. It was indeed a reflection of the depth of the people’s admiration of God’s grace upon His faithful servant’s life that they thronged The SCOAN from the four corners of the earth.

It was a show of genuine love from the people all the way from The SCOAN Prayer Mountain, from where the body made its way to the church auditorium. Leading the procession were escort motorcycles ridden by traffic management officials as The Nigerian Air Force Band sent out sober tones from their horns.

The body of God’s anointed servant, Prophet T.B. Joshua, as it lay-in-state in The SCOAN auditorium.

Once the body of Prophet T.B. Joshua was in the church, the lying-in-state programme officially began. The first family were the first to have a view and spent a few minutes of meditation over the body.

Right after them, SCOAN prophets and prophetesses took their turn to stay in sober reflection with the body, followed by Disciples of Prophet TB Joshua. From then onwards, people from all over the world filed in to view the body.

Among the many international guests were a delegation from Israel who came to pay their last respects to Prophet T.B. Joshua.

A cross section of people from different countries around the world came to pay their last respects to Prophet T.B. Joshua. Also paying last respects on behalf of their monarch was a delegation from the palace of His Royal Majesty Oba (Dr.) Abu Olanipekun, the Zaki of Arigidi-Akoko, Ondo State, Nigeria.

As the viewing went on, people continued to pay their tribute to God’s servant. Among them was Princess (Dr) Adebunmi, who represented HRM Oba (Dr) Abu Olanipekun (the Zaki of Arigidi-Akoko, Ondo State). Princess Adebunmi voiced the feelings of the people of Arigidi-Akoko, saying: “Though Prophet TB Joshua was from Arigidi by birth, he lived his life for every person in the world.” She added: “The legacy he left behind was generosity, mercy, prayers, good works and progress.”

Dr Omoh Irabor, a former personal assistant to a governor, said that Prophet T.B. Joshua “would give you reasons to live again” and that “even his silence spoke volumes.” She added that he “encouraged us in many ways” as a man of vision who saw beyond the present.

When Mr Felix Awogu, the General Manager of Supersport, spoke about Prophet T.B. Joshua, he exposed a fact that had probably not been known to most people. He stated as follows: “You could write a book on his love for sports. A lot of people don’t realise the impact he made on Nigerian sport. In 2013, when we were going for the Nations Cup in South Africa, there was a huge financial gap. He was the one who paid the seed money that made it possible for the team to train. In 2013, when the team won the Nations Cup, when the players went to the camera, it was ‘TBJ’ that they were all shouting!” Mr Nwogu further said that at one time, T.B. Joshua supported the National Olympic Team with the sum of 150,000 US Dollars. Concluding, Mr Awogu said that Prophet T.B. Joshua “was an epitome of kindness and love” whose “major philosophy was giving a helping hand to the downtrodden.”

All the way from Hungary, Evelin and Akos Balassy also came to pay their tribute to God’s servant. Akos said: “When I met him one on one, he was such a humble man. There was such an incredible love that came out of him. It was fantastic that he could translate the words of the Bible into today’s words.” Evelin said: “The first time I came here, I received my healing because I was deaf in my right ear. Just a touch of the prophet and my ear opened. I received a personal prophecy that was shocking but changed my whole life. That was the beginning of the journey.”

There was also a tribute from the Muslim community in Nigeria, as Alhaji Isah Abdul Rasaq, the secretary general of Islamic Art and Culture, Abuja, Nigeria, spoke about God’s servant’s “commitment to humanity and society.” He further disclosed: “He always called me to ask about my people’s welfare, especially in the internally displaced persons’ (IDP) camps and he always asked what he could do to help. He was always concerned about how to tackle the North East insurgency.”

On his part, Ecuadorian Pastor Modesto Montero commended the man of God for the school he re-built in Ecuador following its devastation by an earthquake. He reported that Prophet T.B. Joshua had donated a sum of $400,000 for the purpose. Pastor Montero said, “Not only did he rebuild the school, he also gave them a new IT centre.” He also said he was amazed that God’s servant was able to visit some of the toughest terrains in the course of doing social work. He ended by noting thus: “Prophet T.B. Joshua taught me that as a Christian you are to love.”

Other speakers at the lying-in-state included a delegation from the nation of Israel comprising Mr Ayoob Kara, President of the Economic Centre for Peace, Israel; the representative of the Druze nation in Israel, Sheikh Abdullah Zaid; the representative of the Bedouin nation, Muhammad Zubidat; Rabbi Gadi Ben Zvi of The Economic Peace Centre, Israel; as well as other dignitaries from Israel who had a special relationship with Prophet T.B. Joshua. Mr Kara described God’s servant as “an important friend of Israel – of Jerusalem” who was always ready to assist the Holy Land. He also described Prophet T.B. Joshua as a very accommodating father and big brother. “I followed him because of what he did in Israel,” Sheikh Zaid said. Zubidat, who is also Mayor of Basmat Tivon, said: “Prophet T.B. Joshua is God’s own – a prophet of all the nations in the world.” Rabbi Zvi testified: “His legacy will never stop because when you do so many powerful things to so many people, it’s not by the way – it’s forever. He helped in putting families together, people together; he helped the poor and the sick.”

Tributes also came from former Ghanaian vice presidential candidate Prof. Nana Jane Opoku-Agyemang and former Ghanaian health minister Dr George Yankey. Prof. Opoku-Agyemang observed: “If we have power, that power should be used in the service of people who are powerless. Prophet T.B. Joshua had the best position in the whole world and what did he use it for? He used it for you and I. He demonstrated faith through action.” On his part, Dr Yankey started by describing Prophet T.B. Joshua as “a very good human being and a true man of God endowed with abundant grace” whom God lifted “to indescribable heights” and who “lived a life of Christ.” He further described God’s servant as “an epitome of love, simplicity, respect and honesty.” He then ended on an emphatic note: “My definition of love is Prophet T.B. Joshua.”

Mrs Marian Ajuzie, a Nigerian widow, told of how Prophet T.B. Joshua took great care of her and her children, as he did for innumerable other widows who were given both money and foodstuffs. She also told of how she had come The SCOAN homeless but now lives in a house of her own. She ended by describing Prophet T.B. Joshua as “a great philanthropist and a man to be emulated.”

United Kingdom-based Mr Samuel Durojaiye and his wife Joyce also spoke. On his part, Mr Durojaiye said that his encounter with the man of God actually helped to end his 28 years of inability to visit his motherland Nigeria from his U.K. base. He also spoke on how his life had blossomed subsequently as God’s servant played a fatherly role in his life. Joyce said that she would like others to emulate the man of God by giving love and succour to those around them. “Through him,” she said, “I saw that giving gives so much joy to people.”

Lawyer Olalekan Johnson Ojo, SAN said, “My relationship with the great soldier of God started in 2007. Ever since I met the man of God, he demonstrated uncommon love and service to humanity. Since I met him, I said bye bye to want. During my pursuit to become senior advocate of Nigeria, he assisted financially and spiritually – and he saw it become a reality. What we must learn from him is love and a life of usefulness to humanity.”

Entrepreneur Jack Rich Tein described the man of God as a great father and mentor, saying he was a man of excellence who made him build his faith and stay focused. His wife Dr Elizabeth Jack Rich said she would like the world to forever remember the prophet as a great philanthropist who didn’t discriminate against anyone.

Maria Oladaran appreciated God for using Prophet TB Joshua to heal her son of inability to walk due to a protruding broken bone, a miracle that had shocked the world.

Former Nigerian Police Sergeant Gift Ayebabogha honoured the selfless and giving heart of T.B. Joshua who upon learning of his attack at the hands of armed robbers leaving him unable to urinate without a catheter, sent him to India for a medical operation. The medical doctors in India fixed his damaged urinary tract and removed the catheter, after which he was able to urinate normally and began his life afresh. The total amount of money spent by Prophet T.B. Joshua and the Emmanuel TV Partners was $25,000.

Colonel Wilson Vergara from Colombia honoured God for the lasting impact that the man of God had on his city of Cali, which used to be the fourth most violent city in the world. During the weekend of historic crusade in 2014, the crime and murder rate dropped to zero and following the prophet’s visit, the city’s violent reputation diminished. He thanked the prophet for the generous donation of 100,000 US dollars to the social work of the Cali Metropolitan Police Force, which made it possible to finish the construction of a police hospital.

During the lying-in-state, comforting music was provided by the Ondo State Government House Choir and the Clegg Vibes Orchestra, both of which groups performed a couple of numbers.

There was also a performance by Nancy Amancio, an international gospel artiste from The Dominican Republic and The Nigerian Air Force Band, Lagos at the lying-in-state programme for Prophet T.B. Joshua.

During the lying-in-state for Prophet T.B. Joshua, the presence of the Holy Ghost was felt as several people fell under the anointing and vomited the poisonous substances in their systems. Every unclean spirit was also cast out, in Jesus’ name! To the glory of God, they received their healing after being freed from the root causes of sickness and disease in their bodies!