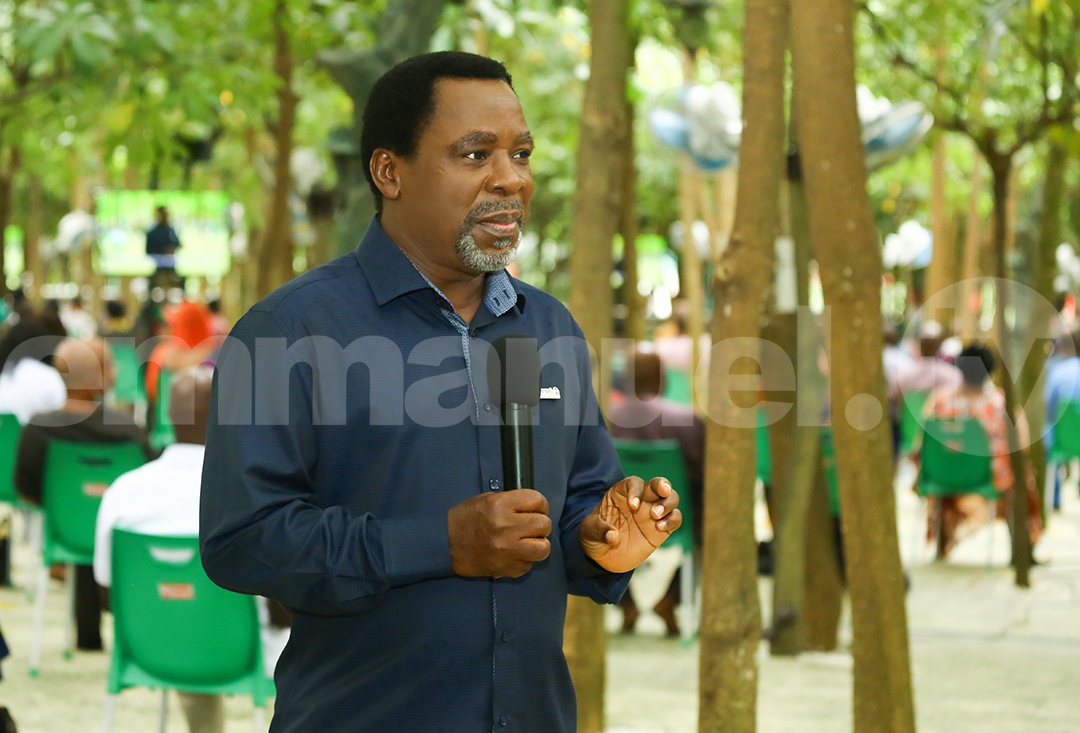 On Saturday, 5th June 2021, Prophet T.B. Joshua actually spoke in parable about his own transition shortly before it happened. He had ministered at The Emmanuel TV Partners Meeting of that day and had started by saying, “I want to thank you for your time and for the heart you have for Jesus.” Then he spoke in parables: “Time for everything. A time to come here and a time to return home after service.” Then he gave the following advice: “Let us watch and pray” (Matthew 26).

In attendance at the Partners Meeting of that day was a certain Pastor Ikechukwu, who later told of the divine revelation he had during the impactful session of prayer and worship by the Emmanuel TV Choir and congregants. Here is Pastor Ikechukwu in his own words: “On that very day, which was Saturday, 5th June, we were at the Partners Meeting. We were praising the Lord. There was a lot of worship going on. I stood up. I was worshipping the Lord; I was deeply in worship. Immediately, my eyes opened. I saw something: People were running helter-skelter. This is my revelation. As they were running around, I quickly opened my eyes. I thought it was real. I looked back. Everybody was deeply in worship. I realised it was a revelation. I closed my eyes again. I was worshipping the Lord.”

Pastor Ikechukwu said the vision occurred a second time, narrating thus: “The revelation came the second time. So I sat down and began to pray. I was praying. I opened my eyes because I was meditating on what I saw. I saw an angel right from this point [pointing], descending. As the angel descended, I was amazed. I was looking at the angel. The second one landed. It was very fast, like electricity. It entered the second garden here [pointing]. Nobody was in the garden. Then the third angel landed. Then our father in the Lord, Prophet T.B. Joshua, came out. He was ministering to us. He was saying it is time to come and time to return home after service. So he began to preach; we were listening to him. He preached to a point.”

Describing the vision further, the pastor disclosed thus: “The fourth angel landed. I was watching them. Instantly, the atmosphere changed; the countenance of our father in the Lord, Prophet T.B. Joshua, changed. He dropped the microphone that was in his hand. He walked round. He was so fast. He walked round and then through the gate. I was watching him. He was moving very fast. I felt somehow because I had never seen him that way. He left us very fast. Before he left, I could recall that the antelopes were running out of that garden where the angels were. They ran to this part [pointing]. Then I watched everything as it unfolded. After that we were called to receive the Anointing Water. Then we received the Anointing Water. We received a message that T.B. Joshua said we were blessed. We received the Anointing Water; after we received it we were very happy. Then we all went back to our hotel rooms. This is what I experienced.”

On the significance of the vision in relation to Prophet T.B. Joshua’s peaceful transition later that same day, Pastor Ikechukwu stated: “God sent His angel and he took him home like Elijah. I want to assure you that God is real and our father, Prophet T.B. Joshua, is indeed a man of God. I saw the angel that came to take him home. And it is the Lord’s doing. I can as well tell you that if every man of God can be called home this way, it would be marvelous.”

Indeed, this vision is only another confirmation of the mighty power of God as has been manifesting in the ministry of Prophet T.B. Joshua right from the early days. As it was in the beginning, so shall it continue to be, in the mighty name of Jesus Christ!