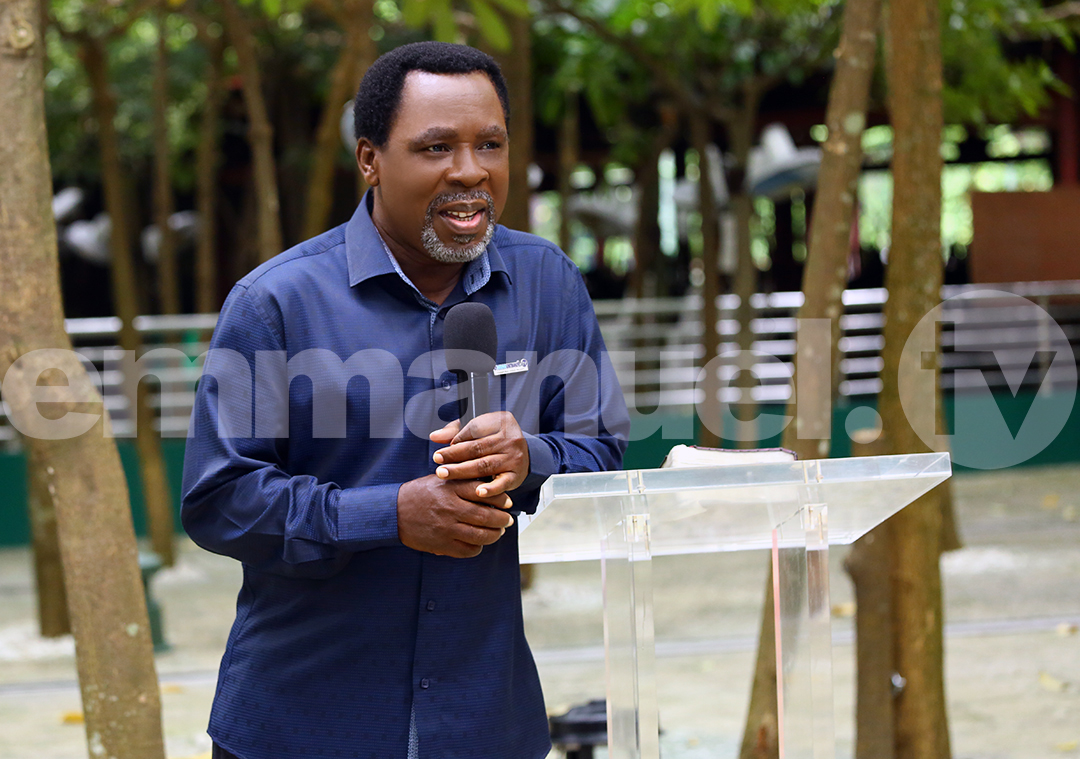 For partners and viewers of Emmanuel TV worldwide, Saturday, June 5, 2021 will remain an unforgettable day. As the man of God stood before the people, his words were few but prophetic: “Time for everything – time to come here and time to return home after the service.” God has taken His servant Prophet TB Joshua home – as it should be by divine will.

Prophet T.B. Joshua’s last moments were spent serving God and humanity – the cause for which he had been born for, lived for and died for. Throughout his life he had stayed true to the motto of Emmanuel TV and The SCOAN: “Changing lives, changing nations and changing the world.”

As part of his words of advice to partners and viewers all over the world on the day, Prophet T.B. Joshua cited Matthew 26 as he told them: “Watch and pray!”

Earlier, Prophet Racine had spoken on the topic “THE WAY OF THE LORD”, citing Isaiah 55:8. For his illustrations, he referred to Jesus’ experience on the way to the Cross and Job’s trials. To follow the way of the Lord, Prophet Racine explained, is to wait upon Him in all circumstances. He said, “Worry and fear destroy our sense of judgment and cripple our ability to think, to act and to exercise faith in trying times.” On that note, he urged congregants to realise that “God sometimes puts us in the dark so we may appreciate the light when it finally comes.”

Below are some of the testimonies shared at The Emmanuel TV Partners Meeting of Saturday, June 5, 2021.

Eboka testified about his healing from difficulty in sleeping, migraines and vision problems. Anytime he was severely stressed by these problems, he would get grumpy with his children and he would find it hard to do the things he needed to do. A fortnight ago, he had attended The Partners Meeting and received a Heaven-backed touch from God’s servant. He remembered: “The man of God prayed for me and I fell down. The migraine I came with was gone. When I got to my lodge, I slept like a baby. I slept throughout the night. I have not used my medication and I have been sleeping fine.” He also told of how his sight problem had been taken care of by Jesus Christ. He said: “I could not see properly with my right eye before. But now I can!” He advised people to have faith in God and the finished work of Jesus Christ.

Emil suffered series of health issues ranging from waist pain, piles and severe stomach pain that made his life miserable for 16 years. He recalled: “Whenever I sat for long, I would feel this heat at the tip of my anus.” Regarding the effect on his life, he said: “It caused me heart palpitations. It made me lose my job.” He continued: “There was this constant flow of blood whenever I went to the toilet. I couldn’t stand for long because of the waist pain and piles.” When Emil had encountered God’s servant during the Meeting of last week, he had cried out to him for prayer. “I felt a shock sensation around my anus,” he recalled. He continued: “When I stood up, I realised the pain was gone. When I bent down I realised the waist pain was gone. I went to check myself in the toilet and the piles were gone.” Flanked by his twin brother, Emil told of how he had travelled back home to Ghana for 12 hours by road after his healing without feeling any pain in his anus or waist. On his part, Emmanuel, his twin, said he was healed of a throat problem that had bothered him for two years. “I could not take cold water,” he said. After getting a touch from the man of God, he went to the canteen and drank cold water after eating. “I didn’t feel the itching sensation,” he testified while advising people to believe in God.

HEALED OF DIFFICULTY IN URINATING!

Godwin and his wife, Cynthia, were glad to share their testimonies with other partners and viewers of Emmanuel TV all over the world. For Godwin, he had been rescued from a most disturbing problem: difficulty in urinating due to an infection. “This affected me badly for about five years,” he said. On how he had tried to help himself, he recalled: “I went to hospitals and doctors said it was an infection. I took medication but no solution. I also took herbal treatments but they didn’t work.” To the glory of God, however, last Saturday marked the end of the problem. According to Godwin, “The man of God touched me and I fell down. I felt a sensation around my waist region. I felt the urge to go the toilet and I urinated freely.” Since then he has been urinating freely and painlessly! On Cynthia’s part, not only did she confirm her husband’s testimony but she also shared hers. She said God had healed her of 11 years of barrenness after she built up her faith by watching Emmanuel TV, before eventually making her way to The SCOAN in 2014 and receiving the Anointing Water. After ministration of the water, she had fallen pregnant that very month! The said boy is now six years old and he accompanied his parents to the meeting. Cynthia advised people to trust in God.

Three years ago, after returning from a trip, Evans, an IT manager, began vomiting and stooling. For a full week the problem persisted but doctors could not precisely identify its cause despite running several tests. Given the imbalance in his system, he later began to lose weight. His vision was affected and he soon began experiencing numbness in his left hand and leg. At the peak of his sickness Evans had a shocking experience, he said: “One night while sleeping, I discovered that I moved out of my body and saw myself lying on the floor and I walked through the door. Beyond the door, everywhere was dark. I kept walking for 1km, then I saw a light shining and a man was in the light. The man was Prophet T.B. Joshua. He asked me where I was going and told me it was not yet time; I should go back. He walked with me till I was close to my house. Back home, I placed my foot on my foot and returned to my body on the bed.” When Evans woke the next morning, he knew that by God’s intervention he had survived death that night. “The next day, I was able to read my computer without my glasses.” When Evans attended The Emmanuel TV Partners Meeting and Prophet T.B. Joshua was praying for him, he saw himself in a pool of bright light and suddenly found himself on the floor. When he stood up, he discovered that the numbness in his hand and leg had disappeared!” He advised people to depend on God and trust in Him. “Faith works and God still heals,” he insisted.

Dan’s testimony was yet another proof that nothing is impossible for God. His daughter Eunice, who had been born with sickle cell anaemia, had her genotype changed by divine intervention! According to Dan, his little girl suffered crises at least twice a month. “At a point she was hospitalised for five days,” Dan said.

To the glory of God, after receiving prayer in April, during The Partners Meeting, Eunice told her father that she had felt fire in her body. On returning home, her father had another test conducted and he got the greatest news of his life: His daughter’s genotype was now AA! As Eunice recalled: “When the man of God prayed for me, I felt fire burning in my stomach. It was hot, as if something was burning. After that, I felt no pain. I thank God! Her father advised: “Have faith in God. Nothing is impossible for God.”

After hearing testimonies, receiving the Word and spending precious last moments with our father in the Lord, Prophet T.B. Joshua, the Emmanuel TV Partners queued in lines to receive the New Anointing Water and Sticker.