A GREATER EXPRESSION OF FAITH - The Synagogue, Church Of All Nations - SCOAN - Prophet T.B. Joshua (General Overseer) Skip to content 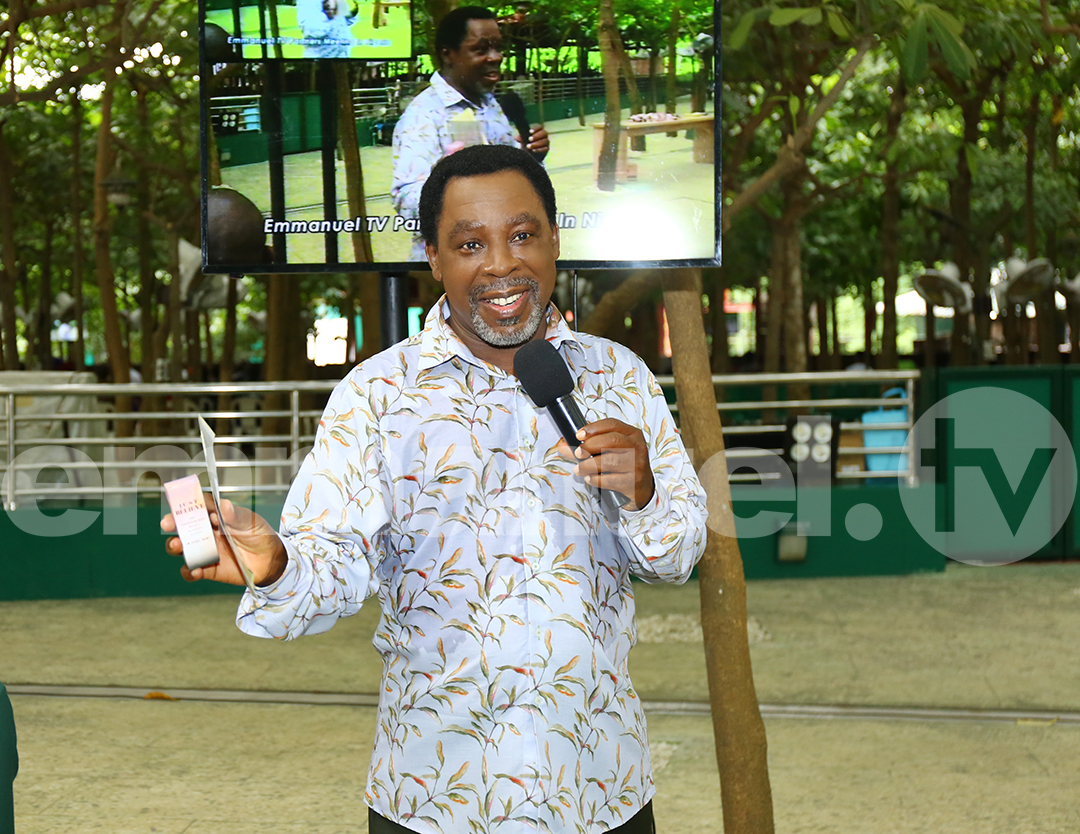 Reading from the proof text John 11:41-42, Prophetess Anne gave a sermon she titled “A GREATER EXPRESSION OF FAITH”. In rather poetic language, she said it was “time to splash around in the Word of God.” She noted the unchangeable nature of God’s Word and said: “Because God and His throne are backing up every Word, that is why it remains ever real, authentic, forceful and most importantly eternal.”

Essentially, the message was about exercising faith in the manner suggested in 2 Corinthians 4:18, that is, faith as the evidence of things not seen – “the Word of God prevailing over sense evidence,” as Prophetess Anne put it. On that note, she nudged the partners’ consciences thus: “Many of us are quick to give testimony of the blessing, healing, deliverance and breakthrough we have received. But how many of us give testimony of what we have not yet received? Even if we do, will this gratitude stand the test of time?” Finally, she urged the partners to always have a believing heart that “produces good works and the right behaviour as a proof of faith.”

Here are a few of some of the faith-building testimonies shared during The Partners Meeting.

Her faith made her whole!

Three days before she made her way to the surroundings of The SCOAN, Christiana had been feeling serious pain in her left knee, making it severely difficult for her to walk. Recalling how it had started, she said: “I slept and woke up and found a bite on my leg. For three days, I couldn’t move my leg or go to the toilet. It caused me general body pain. It was as if there was no bone in my leg. I was being assisted to do everything.” She had then asked her son to bring her to The SCOAN. She continued: “When we got to the church, we were told that there was no service but I didn’t go home because I believed in the God of Prophet T.B. Joshua. So, I decided to pray outside the church, my son supporting me.” The Kaduna State resident told of how she had exercised uncommon faith in God’s power to heal her even without being touched by Prophet T.B. Joshua: “I said to myself, ‘If my feet can step on the anointed ground, I will receive my healing’.” Then she narrated how Jesus Christ came on the scene: “As I was praying, I heard a crack. My knee started moving. That was how I started walking. Before, I was limping but now I can walk, jump and dance.” Christiana’s son thanked God for his mother’s healing, even as the healed woman herself advised people to believe in God and run to Jesus Christ for their healing.

No more difficulty in swallowing as demonic affliction ends

While testifying last Saturday, Charles from Rivers State was blunt about what had been responsible for his problem of difficulty in swallowing. He disclosed: “I suffered from difficulty in swallowing for four months. I attended a political meeting and asked a lady to come to my hotel room. I was carried away in two seconds; all I knew was that I was in a trance. A voice said to me, ‘That thing you said you will not do again, you have been sending prayer request everywhere, is that what you want to do again?’ It was as if they were caning me on the bed.” Upon waking up from the trance, Charles said, he had asked the woman to leave immediately. Then he started crying until he lost his voice. He continued: “My throat got blocked. I started drinking hot water but nothing happened.” In search of a solution, Charles had called one of The Emmanuel TV prayer lines. He said, “The first question I was asked was, ‘Do you believe that your sin has been forgiven?’” He then told of how he had vomited blood and other poisonous substances during the prayer over the phone. A week later, he had attended The Partners Meeting and the man of God touched his throat directly. Charles explained: “Immediately I felt relieved. I was hungry. I was given food and I discovered I could swallow without difficulty. Before, I could not swallow or eat pepper but now I can eat and swallow.” He advised people to not be distracted and focus on serving God.

For 10 years, Arankili from Adamawa State had been suffering from a hernia and an enlarged prostate, causing him to urinate excessively. After receiving his healing, following a touch from God’s servant, he disclosed that the healing had actually begun as soon as he entered The SCOAN Prayer Mountain. He said he had urinated just once since arriving, adding: “When the man of God touched me, the pressure on my lower abdomen disappeared!” To prove his healing, Arankili tapped on his lower abdomen, the pain having disappeared. Glory be to Jesus Christ!

As ailments vanish, so have their sleeping problems!

In addition to the problems of numbness of the left side of the body and chest pain, Gift had been experiencing difficulty in sleeping for almost a year. “As the man of God touched me,” he said, “I received life in my body. The pain has gone! Thank You, Jesus!” Shortly afterwards, he fell into a deep sleep during the Partners Meeting!

Emmanuel from Ghana was released from his problems of urethral stricture and difficulty in sleeping after receiving a touch from Prophet T.B. Joshua. He vibrantly testified, “After the prayer from the man of God, I went to the restroom and I was able to urinate freely. Thank You, Jesus!”

Samson from Delta State was healed of numbness in his right hand. “I could not lift things with my right hand,” he said. He added: “I also had heart blockage, which affected the right side of my body.” After a touch from God’s servant last Saturday, Samson testified: “Now I can lift my right hand freely” just as he testified of his freedom from heart blockage!

An artiste regains full use of his hearing faculty

A Cameroonian comedian and artiste, could not hear with his right ear. Anytime he wanted to listen to music or receive calls, he had to switch to his left ear. “When the man of God touched me,” he said, “I did not know what came over me. Later I started hearing people talking. I can hear now!”

I felt something leave my leg!

During her testimony on Saturday, Gladys narrated what had been her problem before she received prayer: “I was having knee pains for over two years. Sometimes it would swell up. I took drugs but all to no avail.” On the effect of the prayer, she beamed with excitement: “I felt something leave my leg and now I feel light. I can move my leg now!”

No longer a victim of heart and back pain!

Helder from Mozambique came with the problem of back pain, which had made it impossible for him to turn or bend down. He had also been suffering from heart pain for five years. After prayer, he reported: “Now I can exercise myself. Thank You, Jesus!”

Chima’s knee problem also bowed to the power of Jesus Christ at The Emmanuel TV Partner Meeting. He remembered his difficulties: “I was using a knee brace for over a year. I couldn’t sit down or fold my legs.” Then he testified: “After the man of God prayed for me, I felt relieved. Now I can sit and fold my legs. I have no pain. Thank You, Jesus!”

No more pus from her ears!

For the last three years, Juliet’s left ear had been oozing pus. She said: “After the man of God prayed for me, I am healed! I cannot feel the pus coming out from my ear, even as I touch it. Thank You, Jesus!”

Pneumonia flees at sight of the anointing!

Since last year, Emmanuel from Edo State had been suffering from pneumonia. “I used different types of antibiotics,” he said, even as he disclosed that he had also been experiencing chest pain. After receiving prayer, he testified: “The pain has gone!”

After the multitude of miracles, the Partners individually collected the New Anointing Water and Sticker to take back home for their own use as well as their loved ones.