THE MOVE OF GOD KNOWS NO BARRIERS - The Synagogue, Church Of All Nations - SCOAN - Prophet T.B. Joshua (General Overseer) Skip to content 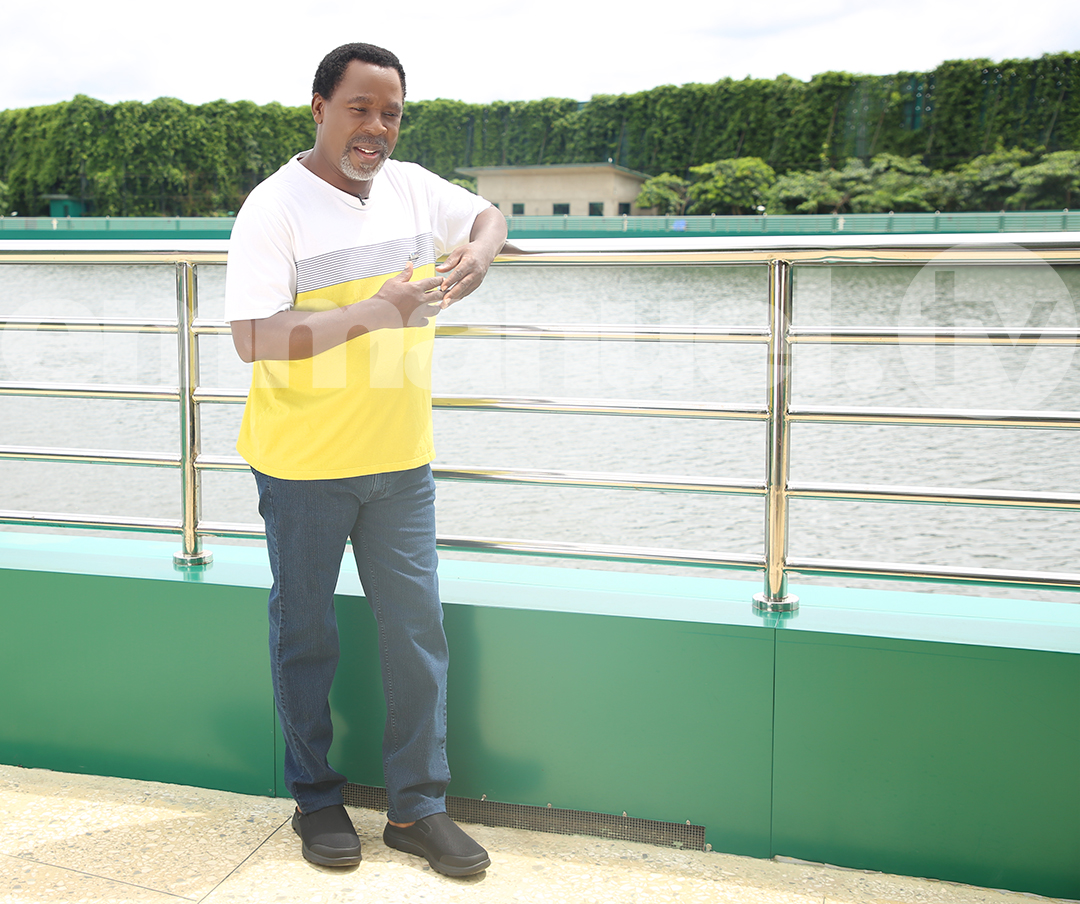 Concerned about the situation all over the world, at a time when millions are facing grave economic and medical challenges, Prophet T.B. Joshua reiterated the need for people to trust in God Almighty’s power to reach them anywhere they are. To that end, he announced the resumption of The Distance Is Not A Barrier Interactive Prayer Sessions, a medium through which the Holy Spirit has been striking at the roots of illness and disease, as well as stagnation and setback, in the people’s lives.

Introducing the latest in the series of interactive broadcasts, the man of God told viewers: “Viewers all over the world, we realise that the situation at hand affects the cost of flights. Remember, I had predicted that flights would face challenges. What we are about to show is the healing of God, the blessing of God and the salvation of God being brought to your home. God’s power cannot be limited by space, time or circumstance. God’s mercy is unlimited. Take your time to watch. I will be joining them next week. You can also enrol in the Interactive Prayer Sessions. Let us believe Jesus for our deliverance, our healing and our salvation. God bless you. Emmanuel!”

For her part, Prophetess Yinka prefaced her message with words of assurance to those being “threatened by the advancing forces of their situation, fighting without but filled with fear within.” She cited Exodus 14:10 and 2 Kings 6:16 as she urged them to “fear not.” She then encouraged viewers all over the world to equip themselves with clear and great thoughts of God and the invisible world, the immortal God, in a message entitled “FOCUS ON JESUS, NOT YOUR STORM!”

Further urging viewers to overcome constant defeat by looking at their situation only from God’s point of view, she cited Matthew 8:23-26 and John 8:12 before explaining thus: “Looking at your storm from the human point of view brings fear, discouragement, panic and anxiety. Until you decide to look at your situation from God’s point of view, you will be constantly defeated and overcome by satan.” She then stressed the point again: “Focus on the Word of God, not what your situation has to say, because the Word of God overcomes every fear, in Jesus’ name!”

Since taking off amidst the pandemic-induced lockdown last year, The Emmanuel TV Interactive Prayer Sessions have benefitted thousands of people across all continents, with prayer recipients receiving instant healing and deliverance, in Jesus’ name.

During the session with Prophetess Yinka, the end came for the health issues in the lives of William in Australia, Didier in the USA, Lee Ji-soo in South Korea and Dinara in Russia, among numerous other cases.

By the time the Master Healer was done with His work, Williams could walk freely again without knee braces after being healed of torn knee ligaments and osteoarthritis of the knees;

Didier, a medical practitioner, took off his neck collar after being healed of two years of cervical issues causing him muscle spasms and severe neck contractures; Lee Ji-soo was no longer bedridden after his ruptured ligaments, tendons and cartilage were repaired, in Jesus’ name, while Dinara stopped the evil spirit-inspired addiction to eating chalk and clay! From Spain to Honduras to New Zealand, similar testimonies were given by people whose bodies are now no longer temples of illness and disease. Praise be to Jesus Christ!

As Prophetess Anne launched into her prayer session, the Holy Spirit affected her words and they produced effects in far-flung corners of the world.

The words healed Johana, a Colombian living in Germany who had been suffering from intestinal disorder, knee problems and blurred vision. Immediately, she cast off her medical device! Julien from France was also healed of difficulty in walking due to a narrowing lumbar canal that had forced him to need a lumbar corset.

A Nicaraguan woman living in the US was also healed of difficulty in walking, so she gladly discarded her walking aid. Several others also received healings and deliverances, even as they expelled the impurities in their bodies. Thank You, Jesus!

Prophetess Anne prayed: “By the very life of God in Your Word, we proclaim deliverance into your systems, organs and faculties, in Jesus’ name!”

Prophetess Angela prayed for Elena in Russia, who, in imitation of her mother, had in the last one year developed the bizarre addiction of eating chalk and clay. The young woman had also asked for prayers over her problem of lust and poor school performance. In South Korea, Kim Hwa-young received prayer for thyroid cancer that had led to 68 tumours in her lymph nodes!

She was also set free from the problem of a severely herniated disc and cervical spondylosis that made sitting or standing a big problem. In the Philippines, an Indian named Aman was healed of a back injury he had sustained in the gym. Now he no longer needs a lumbar corset, special chair or other devices meant to help in restoring his spine.

Park Woo-hyun in South Korea also got healed of the wrist fracture that had caused him to need a wrist brace for the last 12 years. One by one, these cases and scores of others were resolved by God Almighty as the people either vomited or reacted in other physical ways to the anointing. Praise Master Jesus!

Speaking with the unchallengeable authority in the mighty name of Jesus Christ, Prophet Chris made declarations that set people free in places as far apart as Australia, Mexico, Greenland, the Philippines, the United Kingdom, South Korea, and El Salvador, among others.

There were healings for Simione, a Fijian living in Australia who no longer needed the knee brace he was using to support his dislocated knee; for Oliver in Venezuela who finally dropped his lumbar corset after 13 years of severe back pain and spinal problem; for Mandeep and her husband Chanden in the United Kingdom – the wife no longer needing the hand splints she had been using to support both her weak wrists, while the husband was healed of diabetes and bulging discs; for Park Hye-jeong in South Korea whose eye floaters were eliminated in Jesus’ name; and for Adelaida in the Philippines who stopped using a lumbar corset after being healed of lumbar spondylosis.

As the pictures show, many more were the instances of recorded evidence of God’s omnipotence on the day!

Prophet Racine’s prayer session was a chance for Jose to be free from the sleep apnea that had been threatening to take his life – and now he no longer needs a CPAP machine to breathe! Daniel in France also got his healing from a knee problem that had required him to use a knee brace for aiding his mobility. Georgina, a nurse in the USA, was healed of persistent kidney stones, just like Miriam, a Nicaraguan living in Spain who flung off her knee support after being healed of a damaged meniscus that had virtually grounded her for two and a half years. Miriam’s allergy issues were also cleared away and now she will no longer be having itchy hands and difficulty in breathing. The anointing equally healed Silvana in Chile of disc herniation and now she no longer needs a lumbar corset.

Cindy in Colombia was healed of anorexia nervosa and now the 28-year-old’s meagre 33kgs of weight will start to rise dramatically. Like Jose, Daniel, Georgina, Miriam Silvana and Cindy, scores of others also witnessed the raw power of God during the session. All the glory belongs to Jesus Christ!

A Message on Partnership

To conclude the sessions, Prophet Racine gave a special message to Emmanuel TV Partners all over the world. In a world where economic, religious, political and cultural issues have turned neighbours into strange bedfellows, he encouraged the partners to “love their neighbours as themselves” irrespective of faith or race. He equally urged them to pay special attention to the elderly, saying: “This is the time to reciprocate to them the love, care, warmth and tenderness now that they are too old to meet their needs without help.” Reminding the partners that we are all stakeholders in God’s master plan for His creation, he stressed the need for all hands to be on deck as we forge ahead in the mission of changing lives, changing nations and changing the world. He then ended: “I have never seen a man of persevering faith disappointed nor God’s purpose in his life defeated by the vicissitudes of life.”