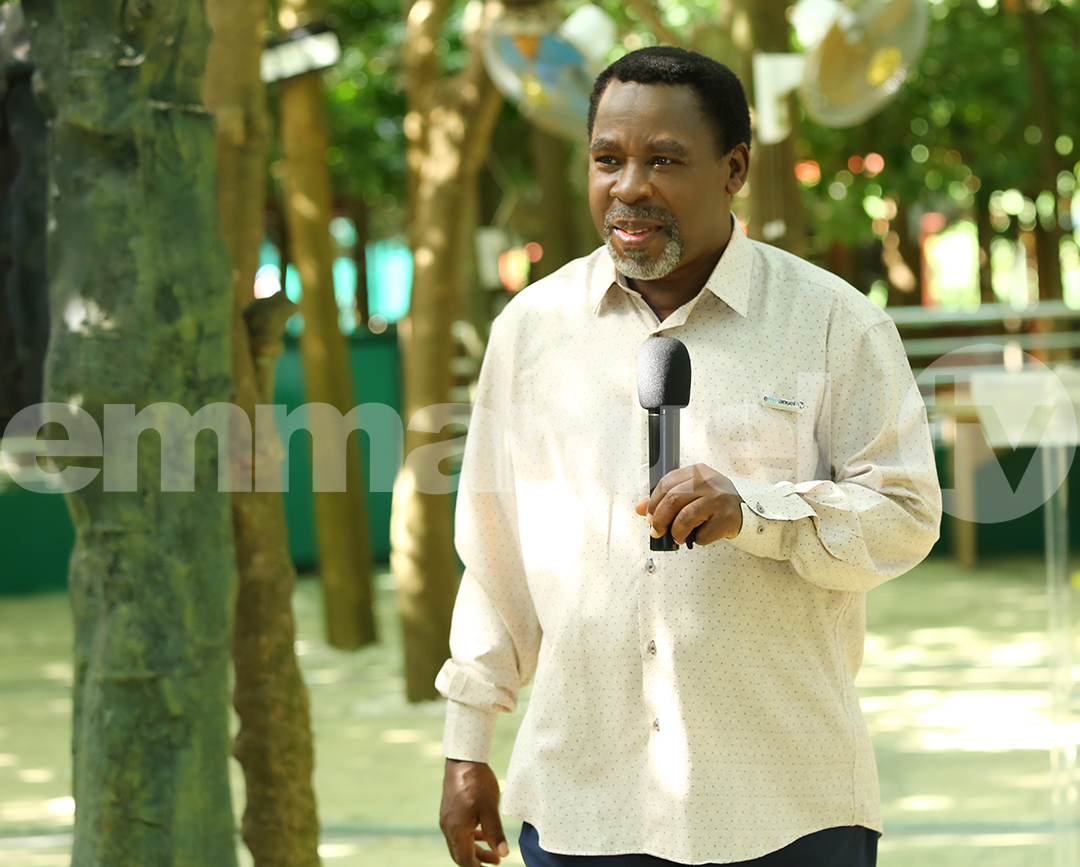 The Spirit of God moved mightily again in the midst of the people during the worship and prayer sessions of The Emmanuel TV Partners Meeting of May 14th-15th 2021. On both days, Prophet T.B. Joshua remained a worthy vessel in God’s vineyard as he ministered healing, deliverance and breakthrough for the salvation of souls. Not leaving out viewers from all over the world, the man of God prayed with them on both days. On Friday he commended the partners on their proper use of face masks, saying: “I want to thank you for obeying the law of your land,” while reminding them that “A good Christian is a good citizen.”

Prophetess Angela and Prophetess Yinka also shared words of exhortation with the people. In the message “You cannot Be More Than Your Thoughts”, Prophetess Angela stressed the need to follow the mind of Christ and to be in the mind of Christ. In addition to her proof text of Exodus 14:11-15, she also backed up the sermon with Proverbs 23:7, Romans 12:2, Matthew 23, Mark 7:20-23, Matthew 5:27-28, Jeremiah 7:22-24, Romans 2:28-29 and Colossians 3:10. The summary of her message was the need for Christians never to elevate their outward appearance or status above total submission to God’s will. According to her, “A Christian should be careful of what he thinks because his thoughts become his words. A Christian should be careful of what he says because his words become his future actions.”

Likewise, Prophetess Yinka encouraged the partners: “REMEMBER YOUR HUMBLE BEGINNINGS”. In the message she noted the importance of fulfilling our promise to God by displaying obedience and commitment to Him after receiving blessings. She anchored the sermon on Hannah’s fulfilment of her promise to relinquish her son Samuel – her very first fruit – to the house of God despite having waited for many agonising years before God opened her womb. Alongside readings from 1 Samuel, Prophetess Yinka also cited John 5:14, Luke 17:12 and 1 John 2:15. Based on these readings, she therefore observed: “Do not allow your new position to separate you from God. Don’t let the magnetic force of this world pull you away from God. The glory of the world is the most charming temptation to the carnally minded. Remember how you began!”

Below are some of the numerous instant testimonies shared during the two days of The Meeting.

An end to 17 years of depression

For 17 years Olajumoke suffered from depression – a situation that constantly kept her lost in thought and unable to sleep. “I had been on medication to be able to sleep, which has caused me weakness and heaviness in my body. It also caused severe headaches.” She continued: “Immediately the man of God touched me, I felt a sensation on my head. I am free now and feeling sleepy!” And to sleep she went on The SCOAN Prayer Mountain!

A miracle for Miracle!

There was a miracle for Miracle, a teenager from Akwa Ibom State who had been having waist and leg pain following two accidents. He narrated thus: “I had an accident in 2018 and I was feeling pain in my leg. This year, 2021, I had another accident on a bike and it affected my waist.” He continued: “I wasn’t able to join the dancing competition due to the pain. But after the prayer of the man of God, I feel relief in my waist. Thank You, Jesus! I can dance now. When I go to school, I will show them what I can do!” Miracle’s mother, Eden, was also delivered from the problem of moving object in the body and spiritual attacks. She said the problem had started after she had a dream in which she ate something.

For 20 years Lucia from Angola had been suffering from inability to sleep owing to evil attacks. At some point she also developed sight issues. In her frantic search for a solution she had chanced upon Emmanuel TV and had taken time to build her faith. After a touch from the man of God, she felt a sensation that persuaded her that God had finally intervened in her case. When she returned to her lodgings for the night, Lucy said, sleep came to her easily and she slept as peacefully as a baby. She also found that she no longer needed glasses for her problem of poor vision. Lucia’s sister Lemba was also delivered from demonic forces.

Spirit male figures used to sleep with her and cause her harm in the dream, leading to bodily weakness in real life. Upon being touched by God’s servant, Lemba felt the power of God surge through her body as the evil forces fled. When she went to sleep for the night, she did not experience any attack – to the glory of God Almighty! And so has the situation remained in the blessed name of Jesus Christ!

The anointing ended Goddy’s problem of difficulty in urinating due to prostate enlargement of around 7.5cm. Told that he needed an operation, Goddy instead submitted himself to the Master Surgeon, Jesus Christ. He testified, “When the man of God touched me, I felt a sensation and I felt urination. I went to the gents and I could urinate freely. Thank You, Jesus!”

Esther came with the problems of uterus prolapse and haemorrhoids. Her womb had collapsed since 2017, leading to problems with her legs and breathing. Doctors had suggested an operation to correct the situation. However, after an anointed touch by God’s servant, Esther will no longer be needing any human surgery, as the Master Surgeon has now restored her uterus to its original position. She testified: “When the man of God laid hands on me, I felt a sensation. My womb went inside. I am healed! My womb has entered inside. Now I can breathe well. Thank You, Jesus!”

After prayer by God’s servant, Busola can now swallow and drink without difficulty. For four years she had been unable to eat solid food, causing her to lose weight. To the glory of God, she is now on the way to regaining her weight. “I want to thank God now I can swallow,” she testified.

Healed of deafness in left ear

Bassey was healed of waist and leg pain as well as deafness in the left ear. “Whenever someone wanted to talk to me,” he recalled, “I had to turn in order to hear clearly.” After a touch from the man of God, Bassey testified: “I can now hear clearly and bend – no more pain!”

Healed of a stroke and high blood pressure

In addition to the problem of high blood pressure, Okafor suffered from a stroke for nine months. He said, “It affected my career and my ministry. I couldn’t write very well. One side of my body was paralysed.” On what he felt during prayer, however, he said: “I felt a cold sensation in my body.” Now he no longer feels shoulder pain and he can roll his hand anti-clockwise!

The sheer joy of being able to smell again after 14 years!

After having been unable to perceive any smell for the last 14 years, Bamidele displayed unmistakable excitement after regaining her sense of smell following a touch by Prophet T.B. Joshua. She demonstrated her healing by sniffing on a perfume. “I am free now!” she declared!

One of the recipients of God’s blessings was a Russia-based diplomat who came the problem of fibroids that caused constant pain in her stomach and made it difficult for her to sleep. After a touch from God’s servant, she was instantly healed of the pain and was able to fall asleep on the grounds of The SCOAN Prayer Mountain. She testified, “After receiving a touch from the man of God, I can’t feel the pains anymore. Before, I could not sleep because of the pain but now no more pain! I am free!”

Power in the New Anointing Water

Below are only two of the many testimonies that were given on the New Anointing Water.

Elizabeth testified about her husband’s healing from a stroke after she ministered the New Anointing Water on him. She said her husband had been ill since 2019 from what she called a “serious stroke”. She narrated further: “I had been assisting him because he could not do anything by himself. I ministered the New Anointing Water on my husband. Immediately, he fell asleep and was there till the next morning.” Assuring her children that things were alright, Elizabeth urged them to wait for God’s wonder in their father’s life. True to Elizabeth’s faith, her husband woke up the following day saying: “Eli, where are you? Look at me – I can walk!” To the glory of God, Elizabeth’s husband has now been able to do the things he had been unable to do before, including driving. He also no longer needs his medications or hospital visits. In Elizabeth’s husband’s own words: “I had a stroke since 2019. Since then I have visited different places. When my wife came back home with the New Anointing Water, she ministered it into my mouth. Immediately, I felt a shock and fell asleep till the next morning. I discovered that I could move my legs and hands. I could get up, stand, walk and do all what I could not do before!”

After Linus complained to his doctors about feeling pain anytime he tried to sit or stand, they told him that he would require an appendectomy. Promptly declining the operation, Linus called a friend and asked him if he had the New Anointing Water. He recalled, “Before he gave me the New Anointing Water, I prayed: ‘God’ take more of me and give me more of you’.” He then prayerfully ministered it. By the time he got up the following day, Linus realised that things were no longer the same. He said, “I stood up differently than before.

I felt free all over my body, without any pain.” Surprised at the disappearance of the problem, Linus’ doctor asked him if he had actually been operated upon. He said that he had in fact been operated upon by Doctor Jesus! During his testimony, Linus demonstrated his healing by doing the things he had been unable to do before. He advised people to seek God’s intervention first.