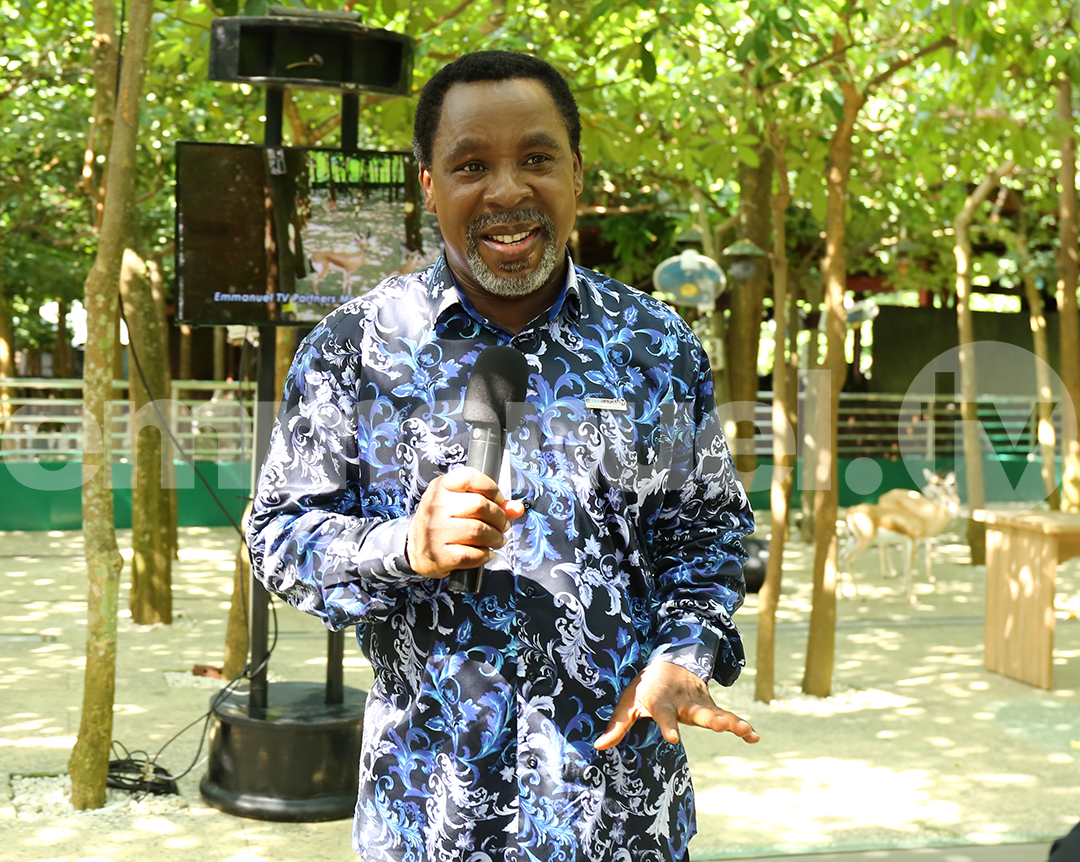 During The Emmanuel TV Partners Meeting With Prophet T.B. Joshua last weekend (April 30-May 1, 2021), Jesus Christ moved mightily again in the lives of the people. Hundreds of Nigerian partners, as well as a sprinkling of others from the rest of Africa, were first blessed with a liberating touch from God’s servant before picking up their New Anointing Water and Sticker. They were also fed with the Word of God by Prophet Racine and Prophet Chris, who both emphasised the place of faith, perseverance and humility in seeking the face of God. The Emmanuel TV Choir further energised the ambience by pleasing Heaven with an abundance of praise and worship.

As usual, Prophet T.B. Joshua offered prayers for viewers on both days – Friday and Saturday. On Saturday, he began thus: “Viewers all over the world, this is the time we have prayed for – that God should deliver us, set us free, protect us and give us salvation. In Jesus Christ’s name! In Jesus Christ’s name! That portion in Luke 4:40 has captured my soul: They were all healed – everyone! This is what the mighty God is ready to do here. They were all healed!”

While Prophet Racine told the partners and viewers to “STRIVE TILL GOD RESCUES YOU” (Matthew 15:22-28), Prophet Chris urged them to engage in “LIFE-CHANGING PRAYER” (Luke 18:9-14). Obviously, both sermons were united by the themes of persistent prayer, faithful living and humility before God. Using the stories of the Canaanite woman (Matthew 15:22-28), Apostle Paul (2 Corinthians 12:7-10), the four men with a sick friend (Mark 2:3-12), the woman with the issue of blood (Mark 5:25-34) and Peter at the seaside (Luke 5:4-7), Prophet Racine encouraged Christians not to lose hope while waiting on God. As he concluded, he gave this piece of advice: “Don’t misinterpret God’s silence as rejection. Though He seems not to answer immediately to your petition, God is still saying something which we may not be able to understand because of our weakness in the things of the spirit.”

Prophet Chris stressed the role of grace in the Christian walk; as such, he said, it would be pointless for Christians to believe they are healed, delivered, blessed or saved by virtue of their deserving it. He observed, “If God had chosen works rather than grace, no one would merit His mercy because our righteousness is like a filthy rag before Him.” After highlighting the lessons from Isaiah 64:6, Luke 5:8, Mark 10:47, Matthew 15:22, Luke 18:13-14 and Ephesians 2:8-9, he declared: “Those who are conscious that they deserve nothing will be thankful for anything. Those who are not expecting anything would be thankful for anything.”

Below are only a few reports of the hundreds of instant blessings that the partners received in the all-conquering name of Jesus Christ.

Roy had been an alcoholic for the last 20 years – an addiction that had got him into trouble all his adult life. For instance, his marriage had been suffering and in his very last semester he had been expelled from the seminary for calling his lecturer a fool! Several times he had tried quitting alcohol by his own effort but failed. For instance, if he stayed off alcohol for two months, he would promptly drink in one day what he would have drunk in those two months! However, once he received a touch on Friday, he fell to the ground and started vomiting the poisonous substances in his system. Surprised to have vomited blood and other poisonous substances, Roy asserted his belief in his permanent deliverance, alongside his father who joined him to thank God for touching his son’s heart to even attend the Meeting.

Nathaniel not only had hypertension but also a heart condition called arrhythmia, which came with irregular heartbeats and caused him general body weakness. As a result, he could not walk long distances without panting heavily. It was the same condition that had claimed his mother’s life at age 42. As God’s servant, Prophet T.B. Joshua, moved close towards him, Nathaniel felt uneasy. After a touch, however, he promptly fell under the influence of the Holy Spirit. He then started to sense divine healing in his body. To God’s glory, he no longer feels heavy around his chest and can now exercise without feeling dizzy.

For Chidinma, it’s migraines no more!

Chidinma began to experience severe headaches after sustaining an accident a while ago. She went to different hospitals and took numerous medications but felt no improvement. Doctors told her that she had migraines, which would have to run a course of four years before ceasing. She decided to stop taking the drugs despite the persistence of the headaches. To the glory of God, after a touch on Friday, her head immediately became calm. To prove her healing, she turned her head vigorously – something she had been unable to do before!

Healed of diabetes and 23 years of internal heat

Williams was healed of high blood pressure and internal heat, which had troubled his life for the past 23 years. He said, “I had gone everywhere but all to no avail. Eight years ago, I was also diagnosed of diabetes.” Consequently, he could not eat most of the food he would have preferred. He continued, “Immediately the man of God prayed for me, I fell down and when I stood up, I felt calmness all over me.” He declared, “I am healed, in Jesus’ name!”

The case from Ethiopia

As the man of God approached Zinach from Ethiopia during Friday’s prayer session, it was clear that the contrary spirit in her could no longer hide. Zinach was restless, as she had been under a spiritual attack for the last nine months, causing her to be unable to sleep. She said she used to feel something spinning in her body affecting her balance and causing constant dizziness. As an anointed hand landed on her forehead, the spirit manifested and she received her definitive deliverance in Jesus’ mighty name! Instantly she stood still as the strange movement in her body had gone. Praise be to Master Jesus!

Peter had been experiencing terrible nightmares that would often see him falling off the bed, such that it would take his wife and kids to lift him back onto the bed. In dreams he would see himself being served food by strange figures. In his search for solution, he was told that his wife was the problem and that it was contrary spirits in her that were serving him the food. After Peter explained these issues, God’s servant prophesied to him that it was actually a family problem that had nothing to do with his wife. Following the touch they received, Peter and his wife have now come to a new understanding of each other, the source of discord having been eliminated forever! To God be the glory!

Gozie from Delta State had blood clots and blood fat, which caused him to experience constant body weakness and numbness. Doctors gave him medications but he recorded no improvement. On Saturday, God intervened in his case as he received an anointed touch from Prophet T.B. Joshua. “When the man of God touched me,” he said, “I felt light and relieved.” He added, “The numbness has gone. Thank You, Jesus Christ!”

Restored for the glory of God

Stanley had been facing the problem of difficulty in breathing; it had started two years ago while he was at the gym. He had been drinking water when an ill wind blew towards him, bringing with it the said problem, which soon began affecting his home. As he could not do much for himself, his wife had to take over the care of the home. When the man of God approached Stanley, he told the ailing man there was something he had to vomit. Then, God’s servant touched Stanley in love, causing him to vomit a whitish substance – obviously the thing responsible for his bodily affliction. Afterwards, he regained his ability to breathe freely again. Moreover, his chest is no longer feeling heavy. Thank You, Jesus!

A cure for Comfort

Seven years ago, young Comfort had fancied wearing a pair of medicated glasses as a way of appearing ‘trendy’. The glasses belonged to her mother, Loveth. Subsequently, she began complaining to her parents about her failing vision but they had promptly dismissed her claims. However, they soon began to notice that she was struggling to see images on TV, as she would always prefer to sit close to the TV while squinting one eye as she watched. Her teachers also began complaining about her inability to see or read properly. Eventually, her academic performance began to drop because she could barely read. Despite using recommended glasses, she could barely see. To the glory of God, however, her perfect vision was restored on Saturday, following a divine touch today in the name of Jesus Christ. Now she no longer needs glasses to see! Hallelujah!

Eric, a Ghanaian living in Canada, had a problem with his left knee. For the past year he had been unable to move freely or run his business effectively. After handing him two knee braces, his doctors suggested knee-replacement surgery but Eric declined and chose to seek divine help instead. As a reward for his faith, God located him on Saturday and now he no longer feels any pain in his legs. Glory be to Jesus Christ!

Doctors treat but only God heals!

For the past 15 years, Asara from Bayelsa State had been experiencing difficulty in walking, causing him to depend on a walking stick. Things were so bad that he could not walk a five-metre distance or stand for up to two minutes without being tired. He had also been suffering from diabetes and high blood pressure since 2005. In the search for a solution he had visited India twice, Germany three times and the United Kingdom six times, not to talk of having been seen by top Nigerian specialists. His condition had been so severe that he had to take no fewer than 16 tablets every day, most of which harmed his organs. Yet, he could not sleep without taking those drugs. However, God took over Asara’s case on Saturday! After prayer, he had declared: “I am OK! I am a young man now!”

After eyes and hearts had been warmed by all they had seen and heard on both days – the Emmanuel TV Partners received the New Anointing Water and Sticker with great faith believing that whatever threating challenges that had crossed their paths had lost their grounds in the face of such anointing they now carried home in their hands!

Readers all over the world, we hope that your faith has been lifted after seeing these testimonies! Emmanuel!