THE ANOINTING WATER - A GIFT FROM GOD - The Synagogue, Church Of All Nations - SCOAN - Prophet T.B. Joshua (General Overseer) Skip to content 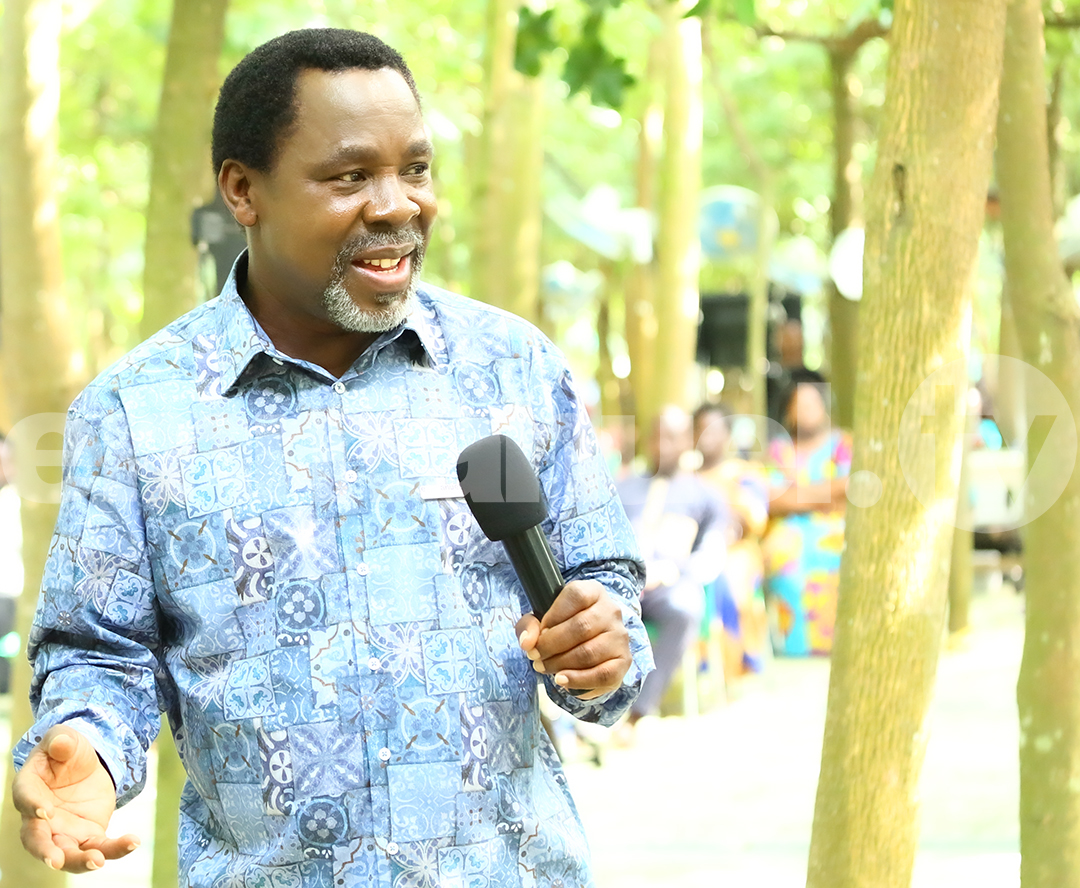 For the weekend of 16th-17th April 2021,Emmanuel TV Partners as well as their family members and friends were at The SCOAN Prayer Mountain to receive from the Lord in an ambience where prayer agrees with nature. On both days God’s servant T.B. Joshua was in his element as usual, preaching friendship, love, peace and forgiveness as he shared nuggets of spiritual wisdom with the partners, especially against the backdrop of YouTube’s suspension of the Emmanuel TV channel. After thanking congregants and viewers all over the world for their messages expressing their concern to YouTube, he assured them that YouTube remains a friend of Emmanuel TV and asked them to pray for the organisation.

The man of God said: “That is the work of God. It is like honey; wherever it drops, insects seek and find it. What happened is a blessing. I want you to help me pray for YouTube – the organisation. Pray for them. Don’t see them the other way round; see them as a friend. We need to be strong. Be strong!” He continued: “The way you look at it is not the way I am going to look at it. I look at it differently. Please remember to pray for the YouTube organisation. Many of you are here today – if not for YouTube you may likely not be here. It was this YouTube, too, that you viewed T.B. Joshua and you were able to come here. So, please pray for them…. Very soon the whole thing will be settled.” The following day, with another set of partners in attendance, God’s servant also repeated his call for prayers for YouTube.

Beginning her faith-lifting message on Friday, Prophetess Anne told the partners that they were at The Emmanuel TV Partners Meeting in Nigeria “for something that makes silver and gold insufficient”: the New Anointing Water and Sticker – but also a touch by God’s anointed one, Prophet T.B. Joshua. She cited the Bible passages Matthew 8:8, Matthew 8:13, Matthew 21:22, Matthew 8:2, Luke 17:5 and John 4:24 to illustrate the different strands of her sermon, which she titled “ONE THING THAT IS YET TO BE APPLIED – FAITH”. The message focused on the need to exercise faith to the very end, without allowing any distraction to get in the way of the two realities on which it depends: God and His Word. She said, “God’s work of wonders, God’s work of healing, blessing, deliverance, breakthrough are of grace but they demand our faith, they command our faith, they require our faith!” Therefore, she told the partners and viewers, the sign of truly believing in God’s power is having a mind that is at rest in all situations.

On Saturday, Prophetess Yinka’s “THE DIVIDENDS OF A FREE SPIRIT” expanded on Prophetess Anne’s message by stressing the role of the Holy Spirit in activating our faith with the power of a free spirit that approaches Jesus Christ only after casting off the garment of self-sufficiency or self-righteousness. With her proof text taken from Matthew 15:21-28, she explained that a major dividend of a free heart is freedom from guilt, inferiority, condemnation and fear, among other things that prevent us from using the Word of God as a “tool of freedom in the hands of the Holy Spirit.” Urging believers to allow the Holy Spirit to teach them how “to pray with groans that words cannot express” and to make God’s Word their roadmap, Prophetess Yinka stated: “Those whom Christ designs to admit into the most intimate acquaintance with Him, he first makes sensible to appreciate how undeserving of His grace they ordinarily are.”

To the glory of God, every participant at the Meeting went home with a blessing. As such, this article presents only a few of the hundreds of instant testimonies that were recorded on both days.

Freed from the bondage of fibroids – after 15 years!

For 15 years, senior police officer Ejiro constantly had a bloated tummy, with something moving around in her stomach. During her periods, her body would be burdened by severe pain that made it impossible for her to function in any way, even as she bled excessively. The cause of all these problems was multiple fibroids, which medical and alternative doctors had not been able to flush out of her system. On Friday, however, those issues came to an end, as the Spirit of God, working through Prophet T.B. Joshua, located her and caused the fibroids in her system to burst and leak out of her body. Now free from the bondage of multiple fibroids, Ejiro’s tummy is no longer bloated and she feels light! Testifying beside her husband, Macpherson, she advised fellow women to believe in God and never to hold back in disclosing their problems to God’s servant. Macpherson himself declared that he has now come into a new relationship with God after witnessing his wife’s healing.

Delivered from a mysterious affliction

In a mysterious affliction, Jimoh from Ogun State had been feeling sharp sand dropping on his head since last year. “Whenever it dropped I didn’t feel comfortable,” he reported. Well, God rewrote his story on Friday and set him free, after prayer by His servant. Recalling how he had felt during the prayers, Jimoh said, “When he prayed for me, I felt something strange leaving me and I feel relieved. After the prayer, I don’t feel sharp sand on my head anymore.”

Two weeks after arriving in the West African country of Burkina Faso, Nigerian national Ogonna suddenly went blind. He ran from pillar to post seeking a solution with doctors but there was none forthcoming. On Friday, as the man of God laid an anointed hand on him, Ogonna immediately felt a sharp pain in his eye – and he recovered his eyesight instantly! During his testimony, he moved around freely as he identified the colours of the clothing of people around him. Now he believes that God’s power can do all things! Standing beside him was his mother, who had encouraged him all the while to keep his focus on God Almighty.

As the one who had been responsible for the logistics of his wife’s treatment, Eunice’s husband could not contain his excitement as he testified about how she had been healed of a heart problem leading to poor vision. It was five years ago, while the couple was abroad, that Eunice’s problems had started – with just a complaint about malaria symptoms. However, it had taken several attempts for doctors to finally diagnose the real problem with Eunice. As her case worsened, despite regular fortnight visits to doctors and numerous expensive medications, Eunice’s husband began to be disturbed, as the drugs were causing his wife to urinate excessively. Even worse, she had started to lose her ability to recognise people and was barely able to see. However, the power in the mighty name of Jesus Christ put an end to Eunice’s problem on Saturday, after prayer by Prophet T.B. Joshua. Now she can see both close and far objects and people. And, perhaps, no one else is happier about this than her husband! Praise the Lord!

Although a medical doctor, Henry from Imo State had been unable to rescue himself from the clutches of insomnia for a good 12 years. Expectedly, this problem had made his days and nights a torture but there was little or nothing he could do about it, even with the many sleeping pills at his disposal. He usually experienced severe headaches and a burning sensation at the back of his head. When the man of God approached him on Saturday, Henry started trembling and then fell – for God had just done something in his life. Healed in Jesus’ name, moments later, he fell into a sound sleep!

No longer a diabetic!

Amos, who teaches in a university in the United Kingdom, had been living with Type 1 diabetes. A diabetes expert had told him he would have to use insulin for the rest of his life; as such, before taking any food, he had to inject himself with the substance, which his body should have been producing naturally. As part of his complications, he usually experienced blurry vision and body weakness, making it difficult for him to do his duties effectively. But that situation has now changed, as all his diabetic symptoms vanished once he received a touch from God’s servant on Saturday!

Some of the partners also received words of prophecy from Prophet T.B. Joshua. There was a word of prophecy for Fidelis from Delta State. Confirming the prophecy, he said: “The man of God touched me and I fell. He gave me words of prophecy – I have a spiritual wife. It is true because anytime I wanted to write an exam or do something good, I would see the woman in the dream and sleep with her. After that, whatever I put my hand to would never succeed. I didn’t have affection for my wife. When the man of God touched me, I felt something leaving me and I became light. I am free!”

Patrick, a university teacher of engineering courses based in Ekiti State, confirmed the prophecy about controversy over a plot of land. He said that he had only just received a call informing him about a court case scheduled for the following Tuesday. Prophet T.B. Joshua assured Patrick that the case would be decided in his favour.

To one woman, the man of God said: “You have a man that stands by you, disturbing your life. That spirit is disturbing you. Because of that, you are lonely.” Confirming the prophecy, she said she would sometimes tell her husband that she was unhappy. Moreover, she said she often took ill anytime she tried to lose weight. She equally said that last week she had sensed someone making love to her, even as she also breastfed a baby in her dream. After the prayer and prophecy, she said, it felt as if something had been lifted from her. Indeed, she is now free from every effect of malevolent spirits, in Jesus’ name!

In Cordelia’s case, Prophet T.B. Joshua asked where her daughter was before telling her that the said daughter was experiencing a fever. Cordelia confirmed the prophecy, stating that her daughter frequently oversleeps and tends not to disclose being ill. To the glory of God, this prophecy has brought healing to the daughter’s life, in Jesus’ name!