DYNAMIC FAITH IN A SOLID RELATIONSHIP WITH GOD - The Synagogue, Church Of All Nations - SCOAN - Prophet T.B. Joshua (General Overseer) Skip to content 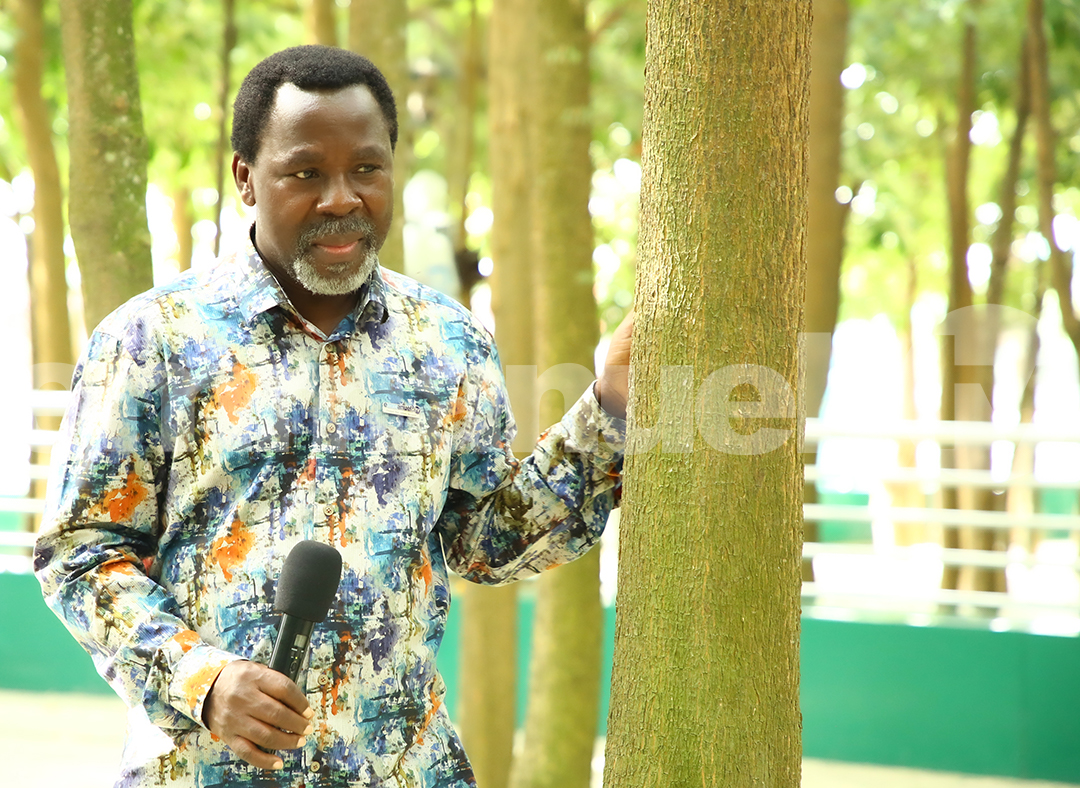 From 9th -10th April 2021, Emmanuel TV partners and their family members all over Nigeria, as well as a few others from outside the country, had a chance to receive the New Anointing Water and Sticker from Prophet T.B. Joshua. Even more, however, each person was also richly blessed by God Almighty as they got a yoke-breaking touch from Prophet T.B. Joshua, in Jesus’ name to clear away every spiritual cobweb on their way to picking up the items.

On Friday, April 9, before the ministration of healing and deliverance on the partners, the man of God said a prayer for viewers all over the world.  The prayer, which is by no means time-bound, is reproduced here for the glory of God:

“If the son of God forgives, you are delivered from every reproach, every shame!

Whatever medium, means that has been used to connect you – be disconnected, in the name of Jesus!

Whatever injustice – here is justice!

Marital problems, business failure – when Jesus says yes no one can say no. Here is freedom, healing!

Viewers, now we are delivered!

Ask God to help you. Ask God to make way where there is no way. In Jesus Christ’ name!

When Jesus Christ says yes, no one can say no.

Believe you are free; you are set free! In Jesus Christ’s name.”

In his message on the day, titled “DYNAMIC FAITH”, Prophet Racine spoke on the need to exercise faith that never loses sight of God’s capacity to rescue the believer from whatever challenge of life that is confronting them. He urged the partners never to lose hope but to be thankful to God despite the difficulties caused by the ongoing pandemic. He described faith as “a bridge that closes the gap from where you are to where God wants you to be,” hence the need to hang on to it when all hopes seem to be fading away. He also advised believers to commit to prayer even in desperate situations in order to show evidence of their faith. Quoting bits of Scripture such as James 2:18-22, Luke 18:8, Hebrews 11:1, Mark 16, 2 Kings 5:14, Matthew 14:22-23 and John 9:7, he told congregants: “The manifestation of the Holy Spirit is the very life of God in our prayer that changes situations, that changes lives – from sickness to good health.”

Carrying on from where Prophet Racine had stopped on Friday, Prophet Chris gave a sermon on Saturday titled “NOTHING IS MORE IMPORTANT THAN RELATIONSHIP WITH GOD,” for which he took his proof text from Matthew 22:36-38 while also citing Luke 22:32 and Hebrews 13:8. His message focused on the unsteady state of the world, especially at present. Most importantly, he advised congregants to be wary of satan’s efforts to cut off God’s children from three things: their dependence on God, their duty to God and their communion with God. Prophet Chris declared emphatically to the congregants: “In an unsteady world, the only One who is steady, stable, steadfast, rock-solid is Jesus!” Therefore, as a way to establish and maintain a solid relationship with God, Prophet Chris suggested, it is necessary for us to talk to God every day, to let God talk to us every day and to talk to someone about God every day.

Showers of Healing and Deliverance for the Salvation of Souls

As Prophet T.B. Joshua moved in the midst of the people on both days, long-time yokes of illness, disease and limitation were broken as the Holy Spirit took control at the mention of the name Jesus Christ. This article contains only a few of the instant testimonies that were recorded on both days.

For Toyin, it’s an end to eight years of misery from fibroids

For eight years Toyin from Abuja kept bleeding unusually owing to the affliction of multiple fibroids. Sometimes her blood level would get as low as 14%, putting her at risk of heart failure. In order to salvage the situation, doctors had suggested removing her womb. Although the bleeding had been a huge source of embarrassment to her, not to mention the severe pain that came with it, she could do very little about it. To God’s glory, however, her story changed after a touch from Prophet T.B. Joshua in the mighty name of Jesus Christ. During the prayer, she had felt an electric shock from head to feet. The evil spirit that had been the cause of her ordeal was exposed and she received her deliverance. Feeling uncomfortable, she rushed to the toilet, where she expelled the fibroids in her system.

To the glory of God, she no longer has any pain in her abdomen, even as she now feels very light and free. Indeed, God is with us!

Could you, for a moment, imagine the torture of being badly pressed to empty your bladder but being unable to do so until you had spent several minutes squeezing your bladder muscles into action? That was the problem faced by Benjamin for quite a while, until a touch from God’s servant restored the vitality of his organs. Immediately after the prayer, he went into the restroom to show evidence of his healing. He testified, “After the prayer, I felt fine. I went to urinate and did so freely.”

At Easter, Moses, a medical doctor based in Nigeria’s capital of Abuja, had been treating someone who had symptoms such as coughing, breathlessness and body pain when Prophet T.B. Joshua’s Prayer for Viewers clip came on screen. As a man of faith, Moses immediately advised the person to touch the screen and pray along with the man of God. Within seconds, she began to react to the power of God as transmitted through the airwaves and the doctor guided her into the bathroom so that she could expel the impurities in her system. Within minutes of expelling them, she recovered perfectly – to the delight and awe of the medical doctor! For that reason, he concluded, “Where medicine ends is where God actually starts from and there is no limit to what God can do.”

“Before I come back, you will deliver that child!”

It was a moment of great delight for legal practitioner Lawrence on Saturday, when he announced at The SCOAN Prayer Mountain that his wife had just had a safe delivery after a long delay. Earlier, doctors had declared that his wife would have to be operated upon owing to the baby’s improper positioning in the womb. Lawrence then got the New Anointing Sticker from his brother and his wife placed it on her stomach and the baby’s position normalised, as doctors confirmed. Then, Lawrence got a call to come for his New Anointing Water and Sticker. His faith boosted by this call, he assured his wife thus: “Let my leg touch the Arena of Liberty. Before I come back, you will deliver that child!” And, to the glory of God, within two hours of stepping his feet on The SCOAN Prayer Mountain, Lawrence got the good news that their newborn had arrived!

No longer a drinker of urine!

Because she was desperate to get rid of high blood pressure and diabetes, Maria from Ebonyi State had taken the suggestion that she should drink her first urine for each day. Eventually she became addicted to drinking her own urine, which she found tasty, although her condition failed to improve – even in spite of her medications. As God’s servant moved close to her, Maria’s fingers started shaking. When he finally prayed for her, she received her freedom and her taste buds got restored to their original condition and now she no longer desires to drink urine. Praise the Lord!

Pearl from the USA had suffered from osteoarthritis in both knees for over 30 years. She also had waist pain. To aid her movement and lessen her pain, doctors had given her a knee brace, lumbar corset and walking stick. To the glory of God, all of those problems vanished when the man of God touched her. She disclosed: “I felt the pain go away completely. I can sit. I was unable to go up and down the stairs but now I can. I can walk, jump and run.” Following her healing, Pearl will no longer be needing her braces and walking stick. “I don’t need them anymore – Jesus healed me! No pain!”

Togolese healed of severe back pain

Samon from Togo was healed of severe back pain that had made it difficult for her to bend or sit for long. When the man of God prayed for her, she felt as if ice had been poured on her back and shoulders and now she doesn’t feel pain anymore. Praise the Lord!

For a good eight years she went from hospital to hospital seeking a cure for the bronchitis that had made it difficult for her to function well at home and at work. In the end, doctors declared that she had an incurable illness that could only be managed. On one occasion she had to be rushed out of an examination hall. That was the case of Nkeiruka from Anambra State who received her healing after a touch from Prophet T.B. Joshua. Now she can breathe well after the tightness in her chest disappeared. Emmanuel!

Healed of seven years of difficulty in breathing

As his mother testified on his behalf, after the man of God had prayed for him, Chimesika is now healed of the problem of difficulty in breathing after seven years. His mother had used to stay awake because of this problem that caused him severe discomfort and sleepless nights. “My son can now breathe with his nostrils,” she said while Chimesika demonstrated his healing.