TESTS ARE NECESSARY FOR OUR FAITH - The Synagogue, Church Of All Nations - SCOAN - Prophet T.B. Joshua (General Overseer) Skip to content 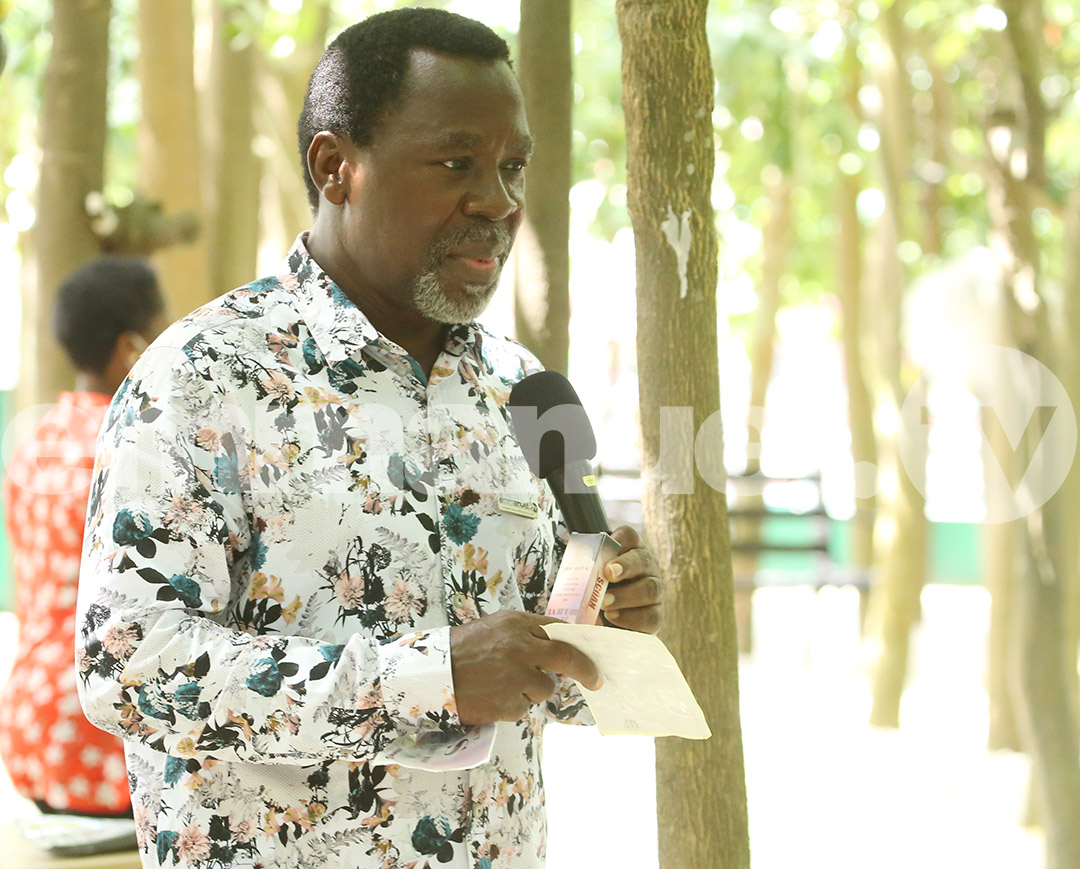 In the latest of his series of one-on-one interactions with Emmanuel TV partners in Nigeria as they visit The SCOAN Prayer Mountain to receive their New Anointing Water and Sticker, God’s servant Prophet T.B. Joshua told them point-blank: “When we don’t have anything to test our faith, how do you know you have faith?” By that frank statement, the man of God was reiterating to the partners the need for them to accept their challenges and trials as opportunities to move closer to God in order to witness divine uplift and promotion. Prophet T.B. Joshua urged the partners not to see the present situation as a crisis but as a blessing.

Against the backdrop of the idyllic, serene and nature-saturated ambience of The SCOAN Prayer Mountain, the man of God also told the partners about the need to make their prayer agree with nature. “How do you feel praying in an environment like this?” he asked. He then went on, “You know, prayer is nature…. Because we have not been agreeing with nature, that is why we have been having problems with our prayer.”

Immediately after addressing the partners, Prophet T.B. Joshua proceeded to minister healing and deliverance to them in the mighty name of Jesus Christ, as he had also done with other partners the previous day. In this article we present you only a few of the numerous testimonies of those whose story has been rewritten during the Emmanuel TV Partners Meeting in Nigeria. Be blessed as you read.

Testimonies of Healing, Deliverance and Breakthrough

For Michael, 15 years of stomach ulcers and leg pain due to a fracture came to an end after the man of God laid hands on him. Pressing on his stomach, he exclaimed in excitement: “See my stomach now – I am free! Thank You, Jesus!”

Sometime ago, Emmanuel had received two blows to the eyes and since then he had been unable to see clearly and his left eye used to twitch. He also used to feel an occasional pinching at a spot in his back, following a snake bite there. After a divine touch from God’s servant, Emmanuel can now see clearly and the pinching in his back, as well as the eye twitching, is gone forever.

Gladys was also healed of the burden of eye irritation caused by sand blowing into her eyes sometime in February. After an anointed touch, her eyes are now crystal clear and she can blink without any pain.

Like Gladys and Oluwaseyi, Joy also received healing for her failing sight. In faith, she had declined the use of medicated glasses and her faith had indeed made her whole. Here, she reads from the small print of her Bible – something she had been unable to do previously.

For Blessing it had been glaucoma that had affected her left eye, making it hard for her to see with it. It took a simple touch from God’s servant for Blessing to regain full use of the eye instantaneously. Here, she proves her healing in Jesus’ all-conquering name. She excitedly declared that she will no longer be using eye drops for life, as the doctors had predicted!

There was a man who, for over seven years, had been troubled by a constant hissing noise in the ears, which also used to cause him to sneeze. He had relied on numerous drugs to no avail but, to the glory of God, his auricular health has now been restored and he can hear clearly – without any hissing in the ears.

For Irene, a chief dental surgery technician based in Edo State, it was finally freedom from an infection in the lower abdomen after 25 years. The infection had caused her barrenness as well as pain in the breasts. After the power of God flowed into her system, she immediately felt relief in her bosom and womb area – a clear indication that her burden had been lifted in the mighty name of Jesus Christ!

For Obo, a military officer from Ebonyi State, it had been a difficult task lifting things, including his weapon, owing to the problem of pain in the right arm and right leg. After being impacted by the power of God, Obo received divine vitality in his limbs. Here, he demonstrates his healing for the glory of God!

From back pain and fibroids of over four years did Precious receive her healing after God’s anointed servant laid a hand on her. As evidence of her healing, she pressed hard on her stomach to prove that the pain had indeed gone. Certainly, with God nothing is impossible!

It was also instantaneous healing for Chinedu, whose piles disappeared immediately a divine touch landed upon him. He had felt a sharp pain in his bottom when the man of God touched him. Now he can sit properly and fully on his bottom. Glory be to Jesus!

“Oluwa seun o! Mi o ni pain mo!” Those were the exact Yoruba words that Adeniyi used as he testified in excitement after receiving his healing from severe waist pain and general body pain. He was simply saying, “Glory be to God! I no longer have pain!” His demonstration of the healing was as exciting as his state of mind while testifying. Indeed, God’s blessings can never be hidden!

The previous day, many were the manifestations of the contrary spirits that had been troubling the people’s lives. However, one by one, these malicious spirits fled at the mention of the name of Jesus Christ of Nazareth.

“I finished her! I’ve finished everything!” so claimed the demon tormenting this woman’s life. In the end, it was the Spirit of God that finished that demon’s activities in the young woman’s life. Praise the Lord!

It was also an empty boast from the demon preventing another woman from giving birth, despite having carried her baby well beyond term. Boasted the demon: “She will not deliver this baby! She has been like this for one year and two months! She will be like this forever! I have tied the baby for more than one year!” At the sight of the Holy Spirit, however, that demon succumbed and let go of the pregnant woman, who immediately vomited the evil deposits in her system! Indeed, no force can stop the power of Jesus Christ!

As Prophet T.B. Joshua prayed for this man, the evil spirit that had been causing limitation in his life was exposed and cast out, in the mighty name of Jesus Christ!

There was great manifestation of God’s power as many vomited the poisonous substances in their system after a touch from Prophet T.B. Joshua just as the contrary spirits that had been the cause of setback and limitation in the lives of the people were exposed.

As the partners picked up their New Anointing Water and Anointing Sticker, there was further manifestation of God’s power as a number of them reacted physically to the anointing in the faith tools. To this end, partners are again encouraged to receive the items with an open heart and to share them with others for free – just as they themselves received them.