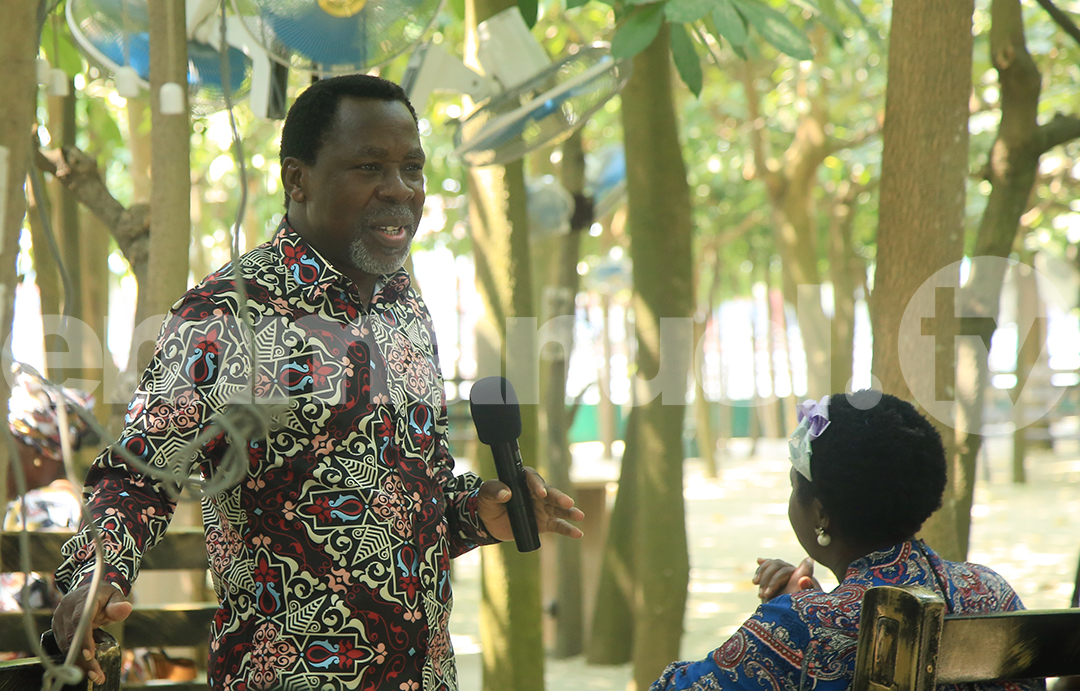 When it was their turn to pick up the New Anointing Water and Sticker, two batches of Emmanuel TV Partners in Nigeria also got the opportunity to receive a yoke-breaking touch from man of God Prophet T.B. Joshua, who prayed with them and prophesied God’s unending blessing upon their lives. It was indeed a glorious time in God’s presence for these partners, many of whom fell under the power of the anointing and vomited the enemy’s deposits in their systems. Following this experience, each impacted partner stood up as a new creation in Christ Jesus.

After the laying on of hands in one of the two sessions, God’s servant assured the partners:  “There is no hindrance for you to go for the Anointing Water. Whatever hindrance – it has been removed. Be it your wrong, your weaknesses, your sin you may not know – I believe right now it has been removed!” Finally, he told the partners that it was important for them not to seek any form of material gain from sharing their faith tools with others, as the anointing must always remain free for all in order to be effective.

A Harvest of Blessings for God’s Children

As the right hand of God fell upon the partners, instant healing happened even as the doorway to breakthrough was thrown open to them in the mighty name of Jesus Christ. The Abuja-based sisters Anne and Tessy were among the lot.

“I don’t want her to give birth!” so screamed the demon causing miscarriages for Anne. Once the manifestation was over, Anne explained that the demon used to afflict her in dreams, causing bleeding in real life and an immediate end to any new life forming in her womb. As an indication of her permanent separation from malicious spirits, Anne’s lower-back pain vanished immediately after the touch from Prophet T.B. Joshua. Moments later, her sister Tessy also began to manifest: “I want to disgrace her! I don’t want her to get married. I make people mock her…. I gave her fake men – they would dump her and go,” claimed the negative spirit in Tessy. To the glory of God, Tessy said her heart is now free after parting ways with the spirit of unforgiveness.

Christiana was also delivered of the evil spirit that had been threatening to keep her childless. After the touch by God’s servant, she is now set free from the malicious male and female spirits that had been afflicting her in the dream. She declared, “I know I’m completely delivered, in Jesus’ name!”

Helen from Akwa Ibom equally received her deliverance from the evil altars of her father’s house that had been causing limitation in her life and ministry work. She testified about the impact of God’s right hand upon her life, saying: “I am delivered forever, in Jesus’ name!”

Malicious spirits also lost the battle over Kogi-based Daniel, who had, on March 5, 2018, been struck by a spiritual arrow, leading to pain all over the body. He had visited numerous herbal homes but had felt no relief whatsoever. After the touch from God’s servant, however, the battle of over three years was ended in a moment! To the glory of God, Daniel no longer feels itching, shortness of breath or neck stiffness. His wife, Rachel, was also healed of stomach pain. Hallelujah!

For Nicholas, what the anointing did was to immediately heal him of arthritis of the legs, which had caused him difficulty in walking. To the glory of God, other issues in his life, including career stagnation, have also come to an end by the reason of the anointing.

In Christopher’s case there is no more pain from hernia as he demonstrates his total relief by exercising his body for the glory of God. “Thank You, Jesus!” he exclaimed.

For Gabriel from Niger State, after three weeks of torture there is no more pain in the neck! Now he can turn his neck freely in Jesus’ name!

Speaking on how he had felt when touched by Prophet T.B. Joshua, Adeboye said he was healed of an ulcer that had long defied herbal and medical solutions. “I felt a hot sensation immediately and calmness came to where I was having issues,” he recalled. “I want to give the glory to God for what He has done,” he ended.

A Prophetic Word for Ijeoma

The prophetic spirit located Ijeoma from Anambra State, who had travelled hundreds of kilometres by road to receive her faith tools. The man of God told her about the spirit of accident that had been troubling her thoughts. Confirming the prophecy, Ijeoma said that she had often dreamed about being crushed by a vehicle while crossing the road or of losing her life while travelling. Following the prophecy, however, the spirit of fear has now departed from her. She happily declared: “No more accident in my life and family, in the name of Jesus!”

These testimonies have indeed lifted our faith to another level. Jesus Christ is the solution to all fundamental issues of life. Just believe; that is our connection to our Lord Jesus.